In the 1950s and ’60s, as the industries that had helped populate and sustain upstate New York like railroading and manufacturing were leaving, the Harris Hill Gliderport in the lagging town of Elmira offered Eileen Collins a different kind of opportunity. She remembers her father taking her and her siblings to the airstrip just west of town to sit on the hood of their car with A&W root beers and watch the lightweight gliders take off and soar over the steep declivity on the north end of the strip.

“I’d watch the gliders and I would say, ‘Well, maybe someday I’ll get to do that,’” she told Irish America in a 2000 cover interview with Patricia Harty. To date, Collins has done so and more.

One of NASA’s most highly regarded astronauts, she has flown on four missions to space – in 1995, she was the first female space shuttle pilot and in 1999, she became the first female commander of a space shuttle mission. She is also a retired Colonel in the U.S. Air Force, and flew as both a test pilot and in combat zones, a decade before it was legal for women to serve in combat zones. (She piloted a transport plane in Grenada during the 1983 U.S. invasion.)

She doesn’t shy away from these “first woman” titles, though she’s much more eager to talk about her work and what it means for women in the field today rather than her own experiences.

“Sure, there were a couple of jokes,” she told Harty, and, “There were challenges,” she’s slyly told the women’s history website Makers. But for her, the joy of her status in that regard is helping others.

“I think I’ve matured beyond the point of [thinking] ‘It’s about me.’ Because it’s not about me,” she told Makers.

“I was at Kennedy Space Center walking through some of the work areas and I met a group of women. And one of them said to me, ‘Thanks for what you’re doing. Because of what you are doing as a shuttle commander, we get more respect from the guys.’ And I never thought of it that way,” she said. 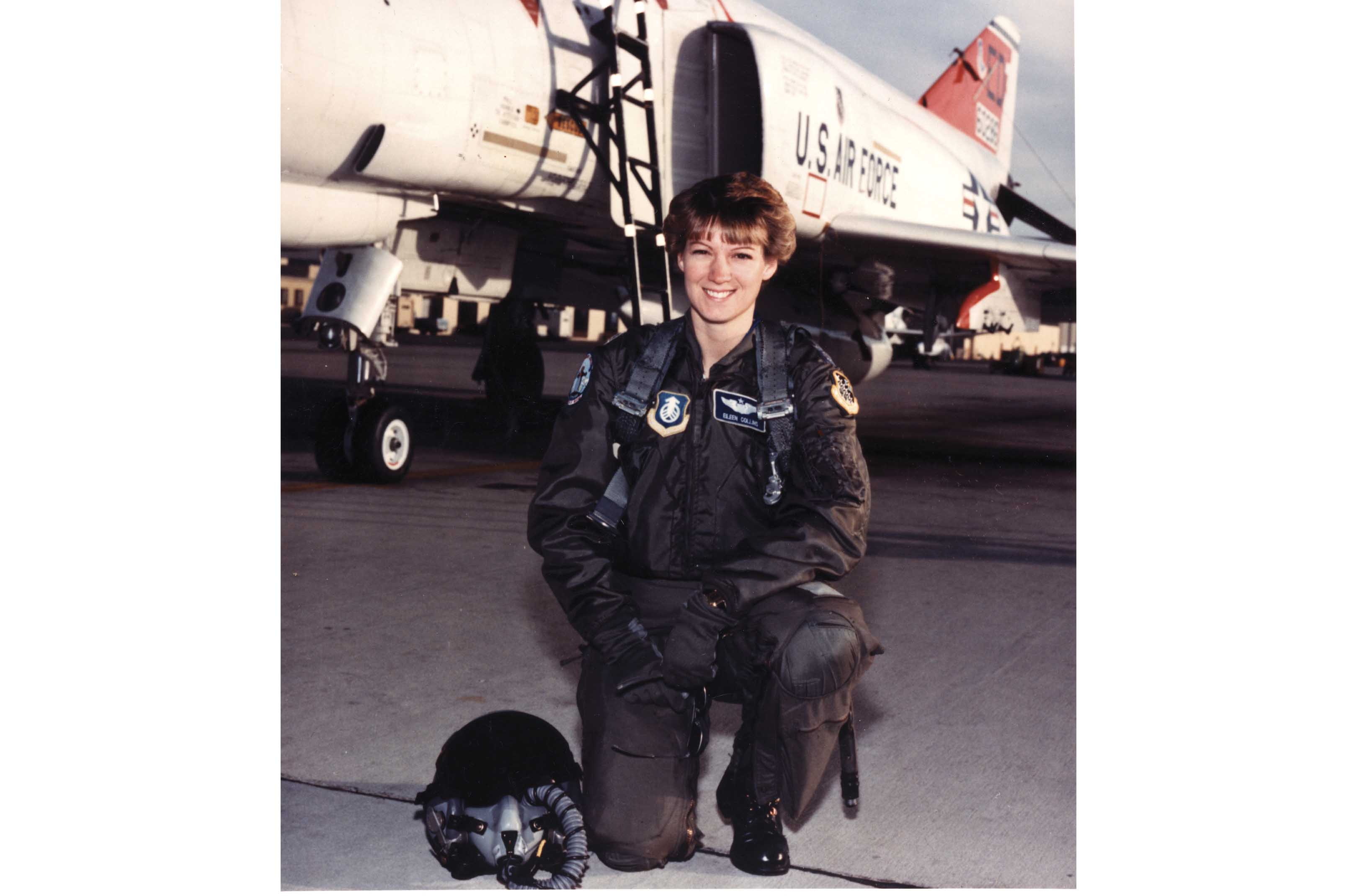 If Collins’s trajectory towards her status began with A&W root beer on the hood of a car, it calcified in the grade-school library and classroom.

Born the second of four children to Rose Marie O’Hara and James Collins in 1956 in Elmira, Collins grew up in a government housing project. Her parents separated when she was nine and her mother was forced to subsidize her shopping with food stamps until she got a job at the local correctional facility. But her parents remained on good terms, and while her father didn’t make much as a postal worker, he financed the children’s private Catholic school education. There, she excelled at math and science and spent her spare time reading everything she could about aviation.

“I really started to love flying when I started reading about pilots – women pilots, military pilots,” she told Harty.

“I read about Amelia Earhart and Bessie Coleman [the first African American pilot] and about the military pilots who took part in World War II, the Korean War, and the Vietnam War. Those military pilots became role models for me.”

When she was in forth grade, she read a Junior Scholastic cover story on the Gemini program. She remembers reading it at her desk and thinking how much she wanted to be one of them and began to actively and obsessively learn about their lives.

She told Harty, “I really adored them and I wanted to learn about their families – what their wives were like, and what they did before they became astronauts. How did they get selected?” She says the fact that they were all men didn’t really affect her until she got to high school and started questioning why women couldn’t do it. (Still, she admits she was a young pragmatist, and is fond of making jokes about how she decided if she couldn’t be a pilot, she’d marry one of them.)

It wasn’t until Collins was 19 that she got her first actual flight experience, on a commercial flight with her mother. The following summer, in 1976, she enrolled in flying lessons after saving over $1,000 from part-time work. She also graduated with an associate’s degree from the local community college that year and received an Air Force R.O.T.C. scholarship to attend Syracuse University, the first year that women were allowed to enlist on equal footing as the male airmen. She graduated in 1978 with her B.A. in math and economics, and the following year graduated from Air Force pilot training at Vance Air Force Base in Oklahoma.

The following decade, Collins served as both an instructor and an active duty pilot at various Air Force institutions, including the U.S. Air Force Academy in Colorado, and Travis Air Force Base in California, where she met her husband Pat Youngs while flying C-141 cargo planes. He is retired from the Air Force now and works as a commercial pilot for Delta. They married in 1987 and now have two children, Bridget (20) and Luke (15). 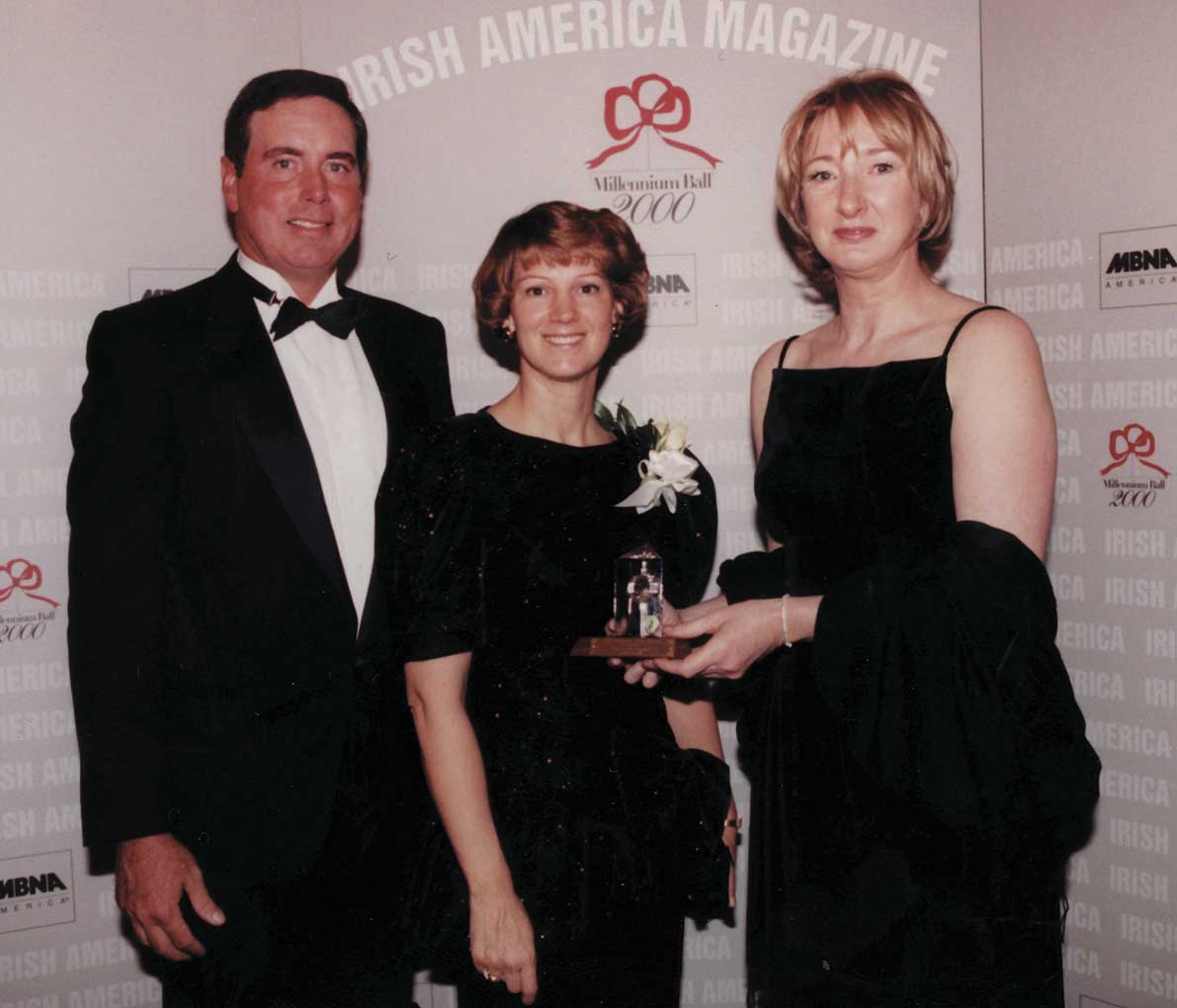 The whole time though, Collins had her sights on NASA. She applied to the shuttle pilot training program in 1990 and was accepted. Five years later she made history as the first woman shuttle pilot when she helmed the Discovery to a rendezvous with the Russian space station Mir. She returned to space in 1997 and in 1999, when she became NASA’s first woman shuttle commander, with a mission on Columbia to deploy the famed Chandra X-ray observatory.

She remembers feeling a lot of pressure on that mission specifically, because she would have to land the shuttle herself on national television.

“The commander always lands the shuttle – it’s never been done on autopilot. The whole world is watching and you’ve only got one shot and you don’t want to mess it up,” she told one interviewer. And of course, there’s the added pressure of being the first woman to do it, too.

“My friends who are women pilots, they were like, ‘Eileen! You got to do it for us! Do it for the women pilots!’” she said.

In 2005, Collins commanded the “Return to Flight” mission to the International Space Station, the first mission since the 2003 Columbia explosion and for which she specifically put her retirement on hold. There, she pioneered a safety maneuver that became standard practice in all subsequent missions whereby the commander inverts the shuttle so the astronauts on I.S.S. can take high-resolution images of the ships heat shield to look for damaged plates, hopefully preventing another disaster like Columbia. 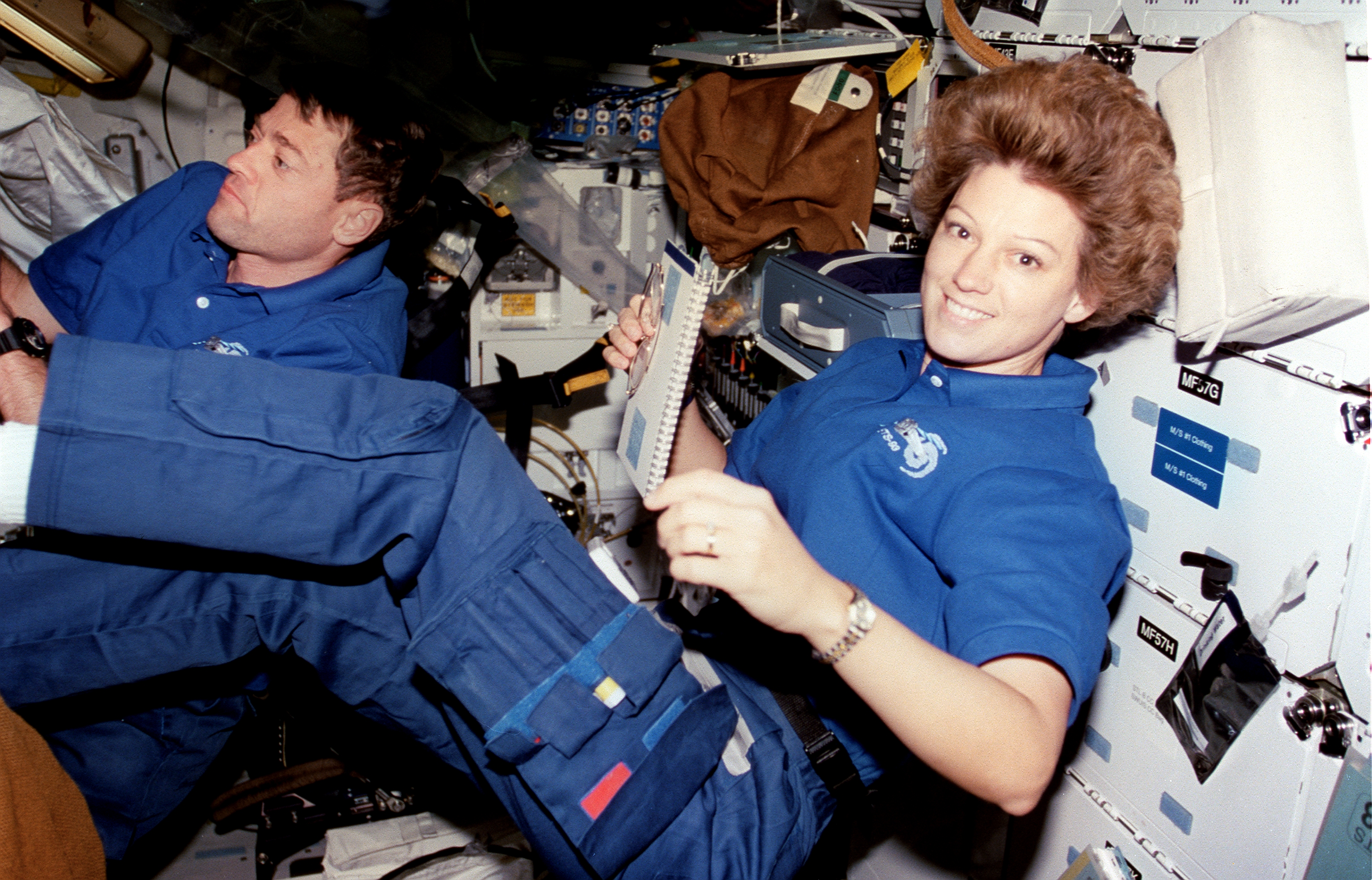 Collins on STS-93 with Columbia in 1999, when she became the first female commander of a shuttle mission.

She also spoke again to Irish America in advance of the flight about the dangers of space travel, where she compared the notion of taking risks and moving on to the risks immigrants took in coming to America.

“The whole history of the space program is part of moving on and making life better for people on Earth. To me, it is very important for humans to get off the planet. I think that yes, there is risk in space travel, but I think that it’s safe enough that I’m willing to take the risk,” she said.

“I think it’s much, much safer than what our ancestors did in traveling across the Atlantic Ocean in an old ship. Frankly, I think they were crazy doing that, but they wanted to do that, and we need to carry on the human exploration of the universe that we live in.”

As for Collins’s ancestors, they came from Clare on her mother’s side and Cork on her father’s. According to her father, who also spoke to Harty in 2000, they were blue collar – “railroad workers on both sides of the family.” In the ’90s, she and Youngs went to Ireland for a golf tournament and decided to go to Cork to “look up all the Collinses in the phone book,” she told Harty in 2000. “But there were so many Collinses in the book that we gave up!”

It was around this time too that Collins met one of her heroes, astronaut Michael Collins, whose book Carrying the Fire was one of the first space books she read, she told Irish America. They also tried to find a common ancestor, as both of their Collins sides came from Cork, but “as there are many Collinses from Cork,” Eileen says, they weren’t able to.

“It was such an honor to meet him,” Collins said. “As nervous as I was, he was very professional and gracious to me, he is such a class act.”

Today, Collins and her husband live far away from the post-industrial Elmira, but her legacy is still there. In the late 1960s, the National Soaring Museum was established next to Harris Hill Gliderstrip, and, just as Collins began learning to fly in the summer heat, the Eileen Collins Aerospace Camp is held each July and August at the museum. ♦ 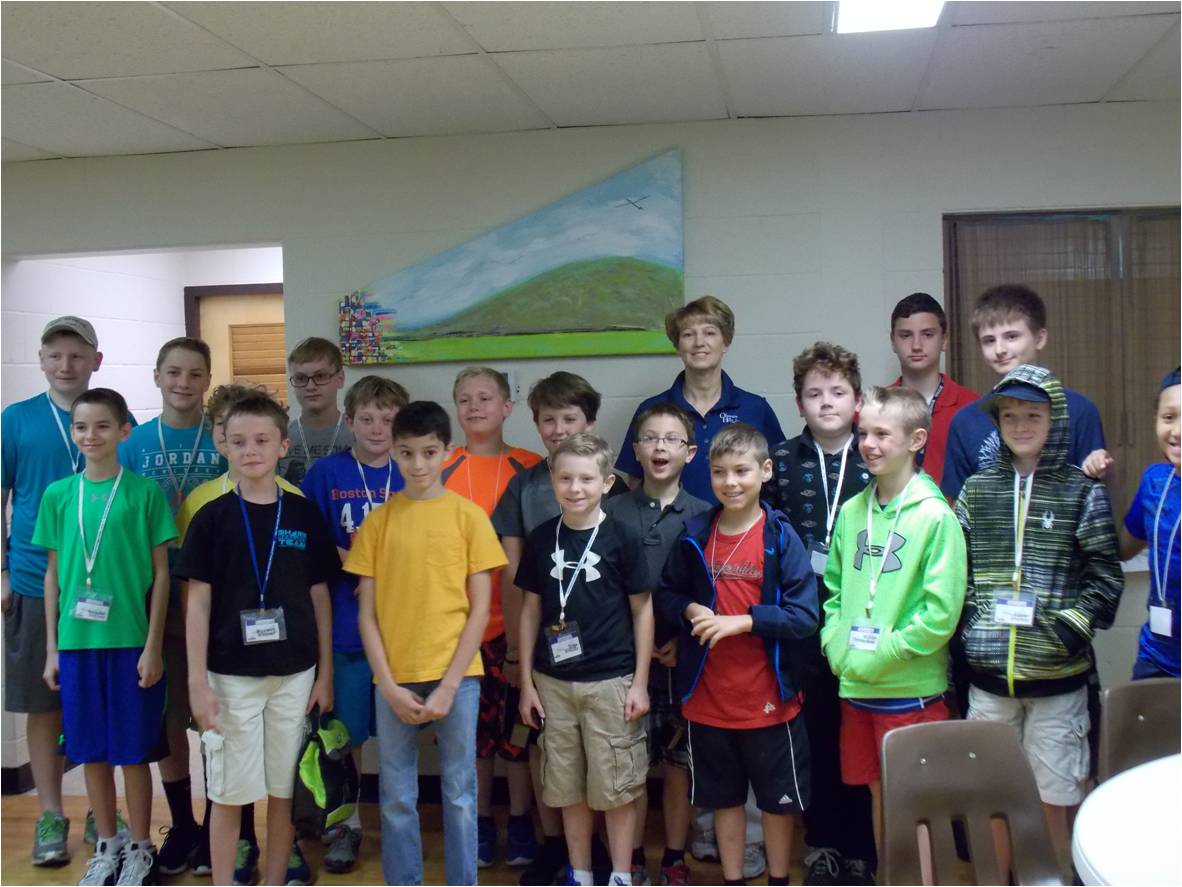