Kenney on a field visit with Concern Worldwide U.S. in Chipopopo, Mozambique.

Traveling to Belfast post-Good Friday Agreement with Ed Kenney and Mutual of America CEO Tom Moran in the late 90s and early 2000s almost always meant engaging in quiet diplomacy – shuttling between the Sinn Féin head office on the Falls Road and Stormont, spending equal time with Gerry Adams and David Trimble, and many other players. The pair offered moral support, advice, friendship, and a helping hand to those in need or in trouble, regardless of which side they were on. It was a powerful example of soft power at work.

Observing Ed’s role in those proceedings would reveal all the hallmarks of his life and career: unswerving loyalty to great visionary leaders, in this case Tom Moran; a commitment to making a positive change in the world; a belief in justice for all people; and an interpersonal style based in listening, gentility, humility, and a seemingly infinite capacity for making friends and allies wherever life takes him.

Throughout his time in Belfast and his entire career, he remained in the background, content to play the role of supporter, facilitator, organizer, friend, and foil, which is why he insists that any record of his own accomplishments include the key figures he worked with and for along the way.

The genesis of the Northern Ireland peace process corresponded with Ed’s retirement from the FBI after nearly 25 years of service and hiring by Mutual of America as Vice President of External Affairs. It was one of many crossroads moments in his life, points at which he almost always made the right choice, influenced by his faith, family, and the truly remarkable people he has met along the way. Each turn led to a series of experiences and accomplishments which add up to a distinctly Irish American life well lived.

Participating in the U.S. private sector’s crucial support of the peace process grew out of Ed’s budding relationship with Tom Moran and Tom’s predecessor at Mutual of America, Bill Flynn. Flynn was an architect of the pivotal multilateral meetings in New York beginning in 1994, and a member of the influential Americans for a New Irish Agenda (ANIA), a group that included fellow business leader Chuck Feeney, former congressman Bruce Morrison, and publisher Niall O’Dowd.

Over time, Ed’s relationships on all sides grew into valued friendships and alliances, which fostered lasting impact. Lorraine Turner, Head of Northern Ireland Bureau in New York remarked, “Ed Kenney’s role in U.S. support for Northern Ireland has gone unsung for too long. I have been privileged enough to see at first hand the contribution this dedicated and thoughtful friend to Northern Ireland has made over many years.” 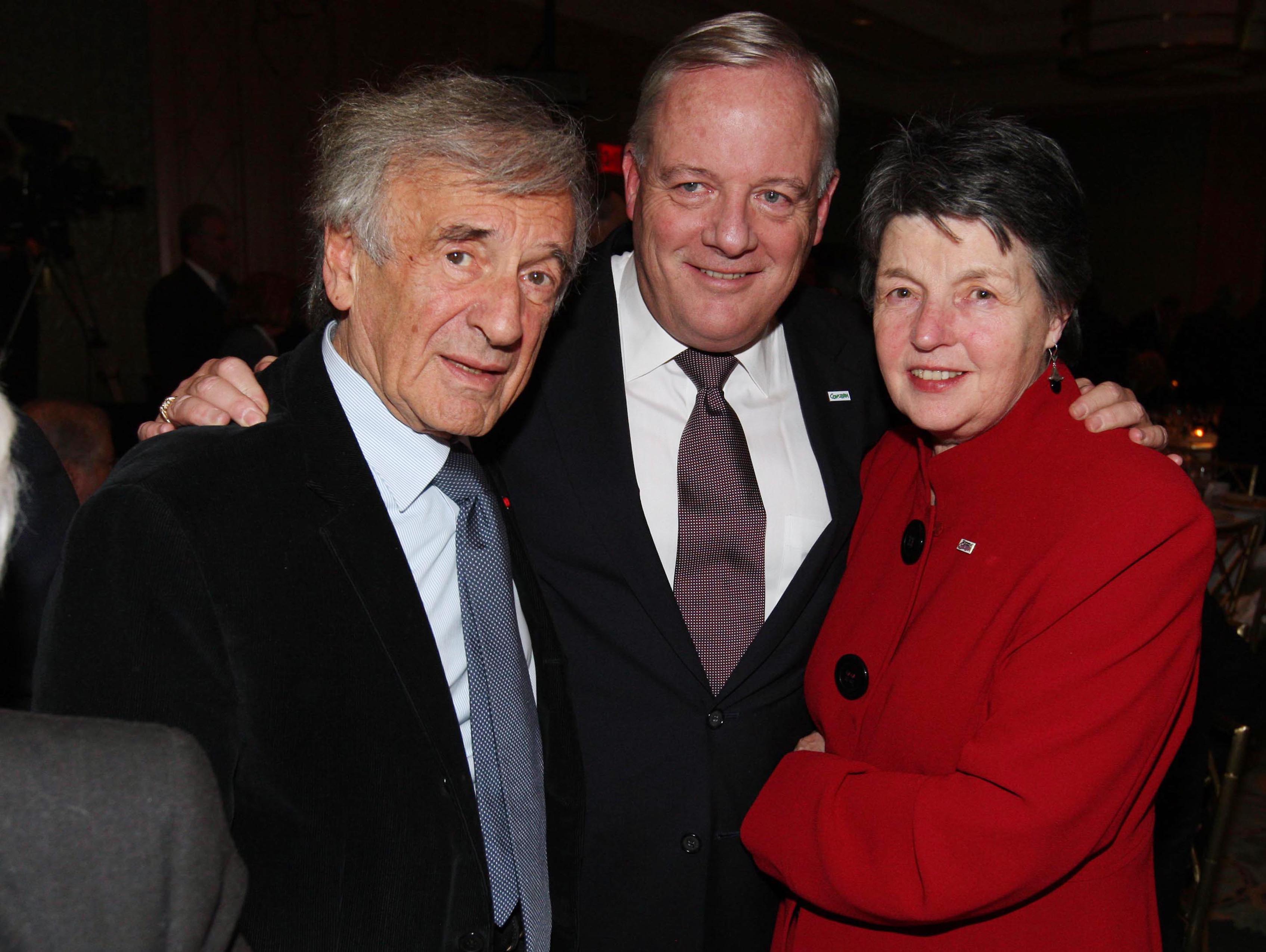 The confidence and courage Ed has brought to his participation in momentous world events are a product of another crossroads moment that occurred in the late 1960s, when he met Brigid Gorman, a daughter of the South Bronx, as well as a Leitrim seamstress and Cavan subway clerk, and had the backbone to show for it. She had fought off numerous serious childhood illnesses and willed herself through Marymount Manhattan College, combining scholarships with waitressing income. She was tough, but gentle, with a burning compassion for the poor and downtrodden, which led her to work as a probation officer, and eventually a social worker and advocate for teen mothers and the mentally ill.

Her more hardscrabble upbringing among the immigrant working class balanced his more comfortable suburban life and more distant roots in Tipperary and Roscommon. He acknowledges that she is not only his rock but also his partner and often his conscience, inspiring and influencing much of his service to the poor. They have five children and nine grandchildren.

Their meeting, and marriage soon after in 1969, came shortly after Ed’s service in the U.S. Army and an earlier decision to take a turn away from the path toward Catholic priesthood – he had been a seminarian since the age of 14, first at Cathedral Prep in Manhattan, then at St. Joseph’s Seminary in Yonkers. Though he stepped away from the priesthood, he had developed a strong network of close friends, many of whom now serve at the highest levels of church leadership.

The next major turn came when he was accepted into the FBI Academy in 1970. It launched a distinguished career, most of which was spent in the Soviet unit of the Foreign Counterintelligence Division. His efforts to root out spies, cultivate sources, and safeguard national security established him as an effective cold warrior, but one whose fairness, humility, and humor made allies of his supervisors, colleagues, subordinates, and even defectors. Many exploits along the way were serious victories that also might have been the stuff of spy thrillers, but he hesitates to take credit or even talk much about them.

His most significant friend, ally, and mentor in the FBI was the Assistant Director in charge of the New York office, James M. Fox. Fox, who oversaw the successful investigations of the first World Trade Center bombing and pursuit of John Gotti, was one of the most decorated and respected agents of his generation, but possessed the same kind of humility, humor, and proclivity for making friends.

One of Fox’s favorite maxims, which Ed adopted, was “Find a job you love, and you’ll never have to work a day in your life.” Ed rose through the ranks of the New York office and became a close advisor and confidante to Fox. They retired the same year, 1994, both leaving a job they deeply loved and bound for another.

Fox’s next post was as executive vice president at Mutual of America, and he introduced Ed to then-CEO Flynn and his soon-to-be successor, Moran. His diplomatic demeanor and vast network of friends and contacts immediately made him an invaluable asset to the company’s philanthropic and corporate citizenship work in New York and behind-the-scenes support of the Northern Ireland peace process. When Tom Moran ascended to CEO in 1995, he increased Ed’s responsibilities on both fronts, and the two began a powerful partnership that continues to this day.

Their introduction to Siobhan Walsh and Aengus Finucane, who were working around-the-clock to open a U.S. affiliate for the Irish humanitarian organization Concern Worldwide, would change the direction of both of their lives.

Aengus was a larger than life personality but also a kindred spirit – humble, humorous, a loyal friend, and a visionary leader. Siobhan was his much younger partner, but just as much a force of nature. Concern’s mission is to work with the world’s poorest people to achieve major, lasting change in their lives. Immediately upon meeting Aengus and Siobhan, it became Tom and Ed’s mission too. They joined the organization’s board and Tom would soon become Chairman, a position he holds to this day. 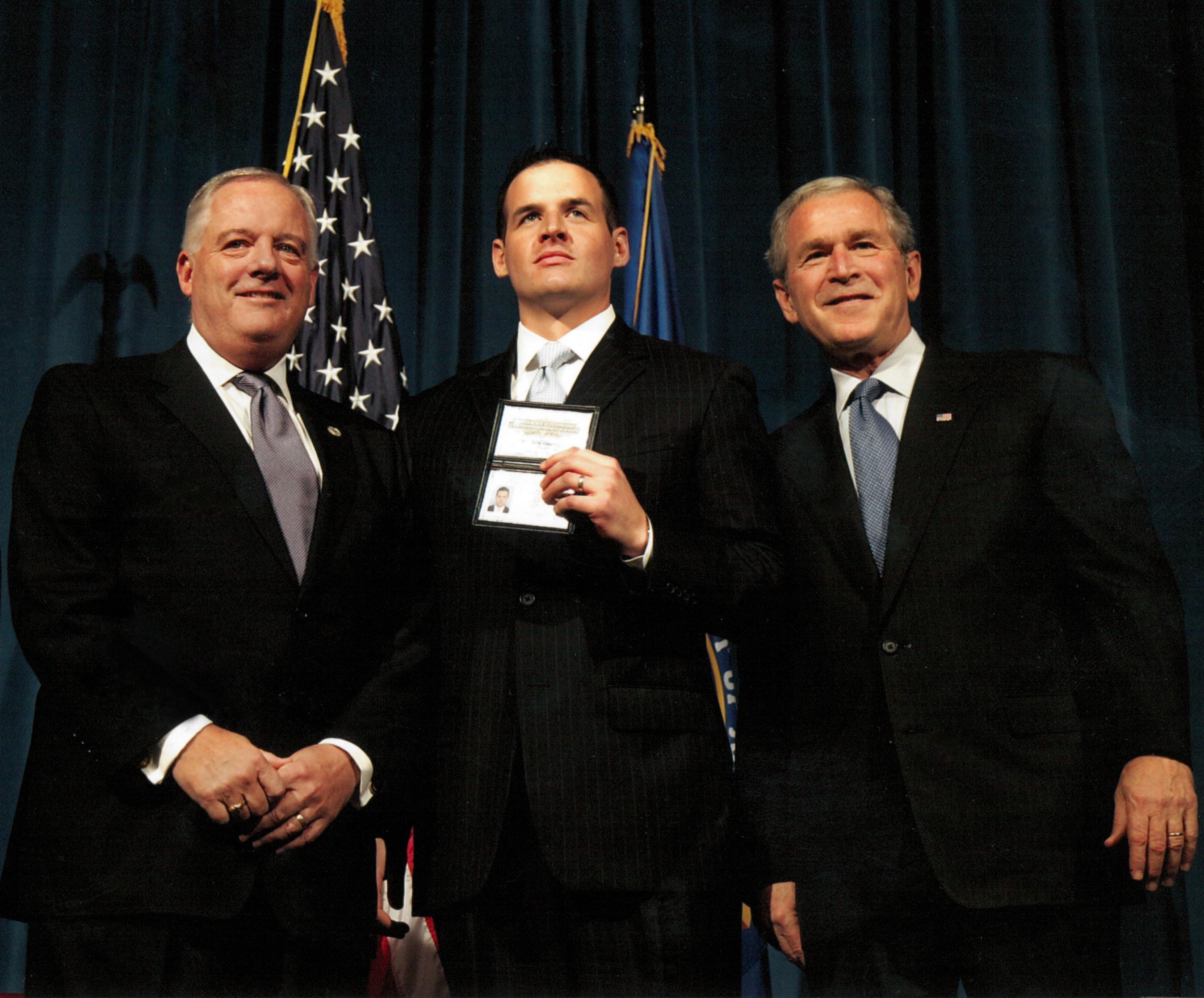 Kenney and son Brendan with President George W. Bush on the occasion of Brendan’s induction into the FBI.

Over two decades, their combined fundraising efforts have produced tens of millions of dollars that have enabled Concern to save and change countless lives. They have also traveled to over a dozen countries as ambassadors to the communities where Concern works. Ed’s quiet personal efforts also include funding the construction of a school in one of the poorest and most remote communities in the Democratic Republic of Congo.

Siobhan Walsh, now an independent consultant, said, “I am proud and honored to know this man. He has given over 19 years of phenomenal service to Concern Worldwide US. He has been and still is a pillar of strength and support. He was also a key member of the TEA team (Tom, Ed, Aengus), that built the great network of friends and supporters of Concern today.  I will be eternally grateful for his kindness, for being a teacher, an extraordinary friend and a selfless advocate for the poorest in our world. He’s the quiet one, helping and doing for others behind the scenes and never seeks the limelight.”

Current Concern Worldwide CEO Dominic MacSorley added, “The thing about Ed is, you never just get Ed. You get his family. You get his friends. You get former and current colleagues. The planet is populated by people who know and have absolute respect for Ed Kenney and his extraordinary life and are not just willing, but anxious to respond to a call to action.  Working with Tom Moran, he became an unstoppable force for good. Concern, on behalf of the millions of people he helped – the world’s poorest – is thrilled that he is being inducted into the Hall of Fame. It is a richly deserved accolade.”

Ed’s charitable work centers on Concern, but it extends to many other causes including the National Alliance on Mental Illness, St. Patrick’s Home, his hometown Ossining Food Bank, the Viscardi Center, the Health Care Chaplaincy, and many others. He is semi-retired from Mutual of America, but still has an office there, and much important work left to do. He is delighted to spend more time with family, but works for his causes with the same energy he always has.

Tom Moran sums it up: “Whether it is the success of Mutual of America, the peace process, or Concern Worldwide, Ed Kenney has been and continues to be a driving force.  He never seeks recognition for himself but is most deserving of this recognition.  His favorite quote is, ‘It’s nice to be important but more important to be nice!’  No one is nicer!  Ed Kenney is a role model for all of us.” ♦