U.S. President Bill Clinton wipes his eyes as First Lady Hillary Clinton, Britain's Prime Minister Tony Blair and wife Cherie look on at the bomb site prior to a walkabout in the shattered heart of Omagh September 3, 1998. Clinton met survivors and visited the site of the August 15 bomb blast which killed 28 people and injured more than 200 hundred. Photo by Martin McCullough / Reuters

A little over twenty years ago, Bill Clinton broke an ironclad rule of American diplomacy with a move that would lead to peace in Northern Ireland.

That rule, in existence for well over 200 years, was that America never interfered in the internal affairs of Great Britain and Ireland.

For Irish Americans over the centuries no matter their power, that rule had stood. Despite contributing blood and sacrifice in the U.S. Civil War, despite the strength of the Irish vote in the early part of the last century, despite the new Irish Republic in 1921, no president ever gave them a hearing. 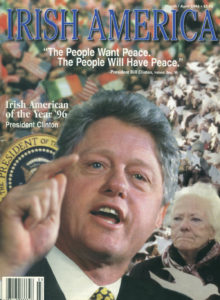 Here now on a bright late autumn day in 1995, President Clinton and wife Hillary were descending down the steps from Air Force One at Belfast International Airport.

I vividly remember that moment. Irish America had finally found its voice and there was nothing surer in my mind but that peace would follow.

Later that day I stood among the 200,000 people crammed into the center of Belfast waiting for President Bill Clinton to appear for the city’s Christmas tree lighting.

While we waited, Van Morrison warmed us up on a cold and frosty afternoon with the song “There Will Be Days Like This.”

With perfect hindsight I can say Van was wrong. There will never be another day like that one.

On the chairs beside me sat Martin McGuinness, Gerry Adams, and Joe Cahill, the leadership of the Irish Republican movement. Not far from me sat David Ervine, Gary McMichael, and Gusty Spence, heads of the Loyalist movement.

Adams and the Loyalists had met the American president, an unheard of occurrence. It was clear Clinton was all in.

Once the organizations they headed had been trying to kill each other. Now they were seated feet from each other, making moves for peace, thanks in large part to the work of the Irish American president.

Up until that day the notion of an American president in Belfast was fanciful in the extreme, yet here Clinton was. I’ll always remember Martin McGuinness especially, and the disbelief and joy in his eyes, that this day had finally dawned.

If there is ever a day that will stand out in history, this was it. Indeed, it was the greatest day of my journalism career.

It all seems long ago and far away now, but life for many Irish reached a zenith that December day in Belfast in 1995. America had at last stepped into the Irish/British conflict, and peace for the first time had a chance.

When we look at ethnic conflicts all over the world today and the inability to stop them the, Clinton intervention in Ireland stands as a beacon of hope.

In the recent release of his oral histories the late Senator Ted Kennedy, a champion of the peace process, gives massive recognition to the role of Bill Clinton and his wife Hillary, who galvanized community groups and women’s groups on both sides.

I’m just glad to have had the chance to witness history in the making. Bill and Hillary cut a triumphant swathe from Belfast to Derry, back to Belfast and then on to Dublin where they received a rapturous reception. By the end of the visit, a deep and irrevocable bond had been forged, one that began when candidate Clinton spoke at an Irish American forum in New York in April 1992 and, most importantly, promised a visa to the U.S. for Sinn Féin leader Gerry Adams, then an international pariah.

Most observers shrugged at the time. Campaigning was different from governing, such a promise would never be fulfilled, they thought. A visa for Gerry Adams was a pipedream.

Later that year, in September, Irish American legend, Mayo-born Paul O’Dwyer and I met Clinton at the Sheraton Hotel in Manhattan, and we both came out of the meeting glowing.

O’Dwyer, a former New York City Council president, had been meeting with American politicians about Ireland since the 1930s. He’d never met one like this. “He will turn the Irish issue upside down,” he predicted. He never spoke a truer word.

Once in power, President Clinton overturned 200 years of British oversight on American policy towards Ireland.

Urged on by a group of Irish American leaders who were intermediaries with Sinn Féin, Clinton jumped on board the Irish bandwagon. The State Department spluttered. Tom Foley, the Anglophile Speaker of the House, objected strongly.

But Clinton, the consummate politician, saw something. In January 1994, after a titanic struggle between pro-British and pro-Irish forces, the decision on whether to give Gerry Adams a visa landed on Clinton’s desk. 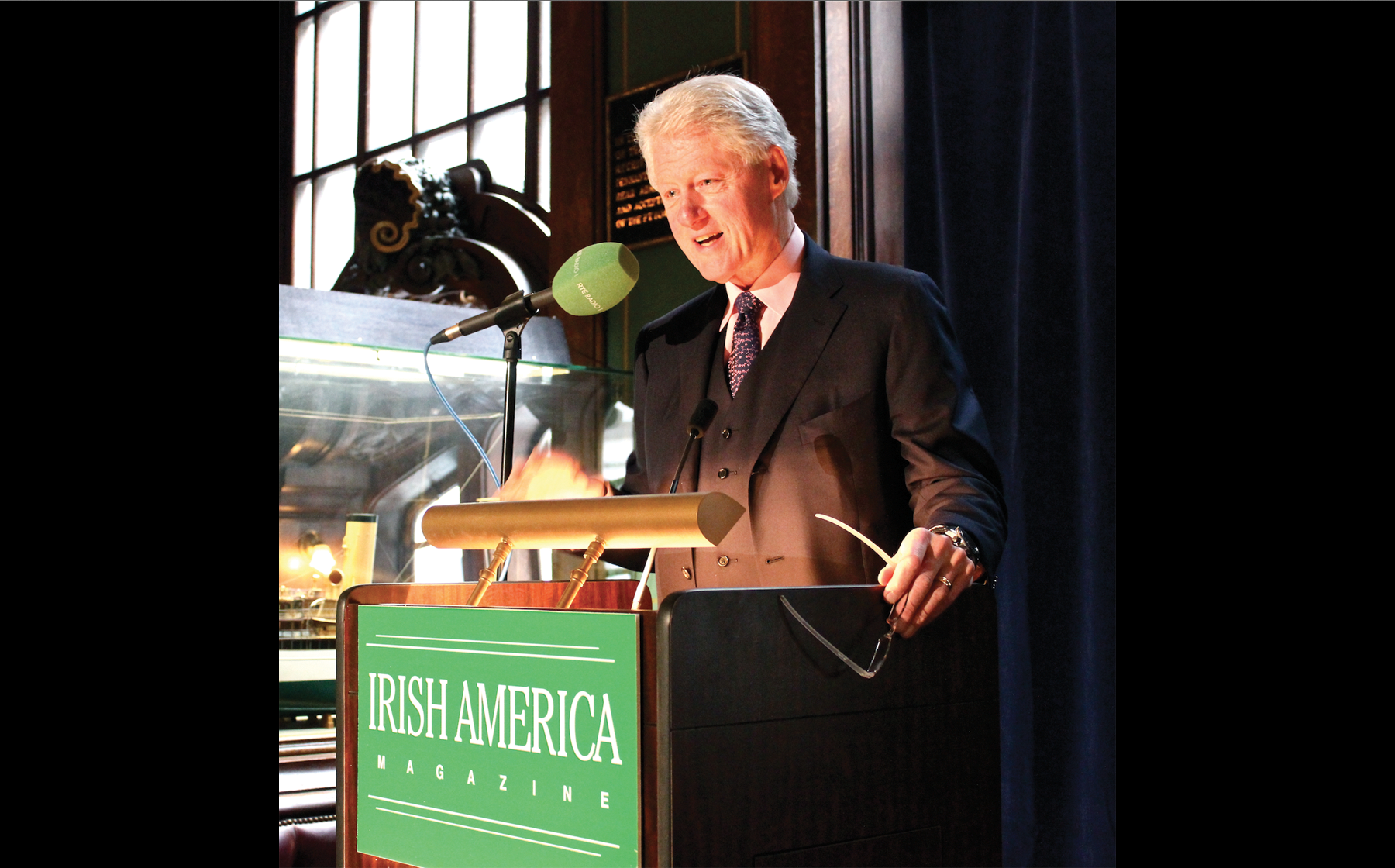 Former President Bill Clinton is inducted into the Irish America Hall of Fame in March, 2011.

On the night he had to make the decision he was sandwiched at a dinner between Speaker Foley and Secretary of State Warren Christopher. Both men pounded him on reasons why Adams should not be given a visa.

Clinton, however, was not for turning. Despite the advice of the F.B.I., C.I.A., State Department and the British, on January 31, 1994 he gave a visa to Gerry Adams. In the end the key counterweight was Senator Edward Kennedy, who, having listened to his sister Jean, then the American Ambassador to Ireland, had decided the Sinn Féin peace outreach was for real.

Clinton’s campaign promise had been fulfilled, and all hell broke loose.

British Prime Minister John Major refused to take his calls and the British media lambasted Clinton, calling [the Adams visa] the greatest insult ever offered a British government. In America, of the major newspapers only The New York Times approved.

Adams arrived amid a welter of excitement. He spoke at the Waldorf Astoria at an event hosted by Irish American business leader William Flynn and he went on CNN’s Larry King Live, forcing British authorities to ban the show in Britain.

The Adams move was one of three key triggers that brought about the historic August 1994 I.R.A. ceasefire. The American president’s unorthodox, outside-the-box maneuver played a massive role in bringing an end to the violence in Northern Ireland.

Clinton had proven that the soft power of an American president when used so brilliantly could solve a problem so difficult some people even admired its enigmatic nature and pronounced it unsolvable.

Happily, Bill Clinton was not one of those. ♦

3 Responses to “Bill Clinton: The Peacemaker”