The Rising: A Guided Tour

Dublin is an urban battlefield. The Ha’penny Bridge where the toll collector stayed in place during the Rising demanding the half penny toll from rebels as they crossed over.

Take a journey around Dublin to relive the events and see the locations of the Easter 1916 Rising.

What could be better than having your own local expert on hand to answer your every question when you’re on holiday? That’s what I thought when I joined 27 tourists from all over the world for a special CIE tour of Dublin, a tour that follows Ireland’s road to freedom.

“This tour ties in with the hundredth anniversary of the 1916 Rising, and what I’ll try to do is tell the story of the Ireland and Dublin of that time,” says our tour guide Frank Foster. “All you have to do is stop me if I talk or walk too fast!”

Joining Frank’s tour means that my fellow tourists and I avoid most of the hassle that ordinarily comes with organizing an excursion. He and his driver pick us up at our hotel in a comfortable bus and drive us to the city center. 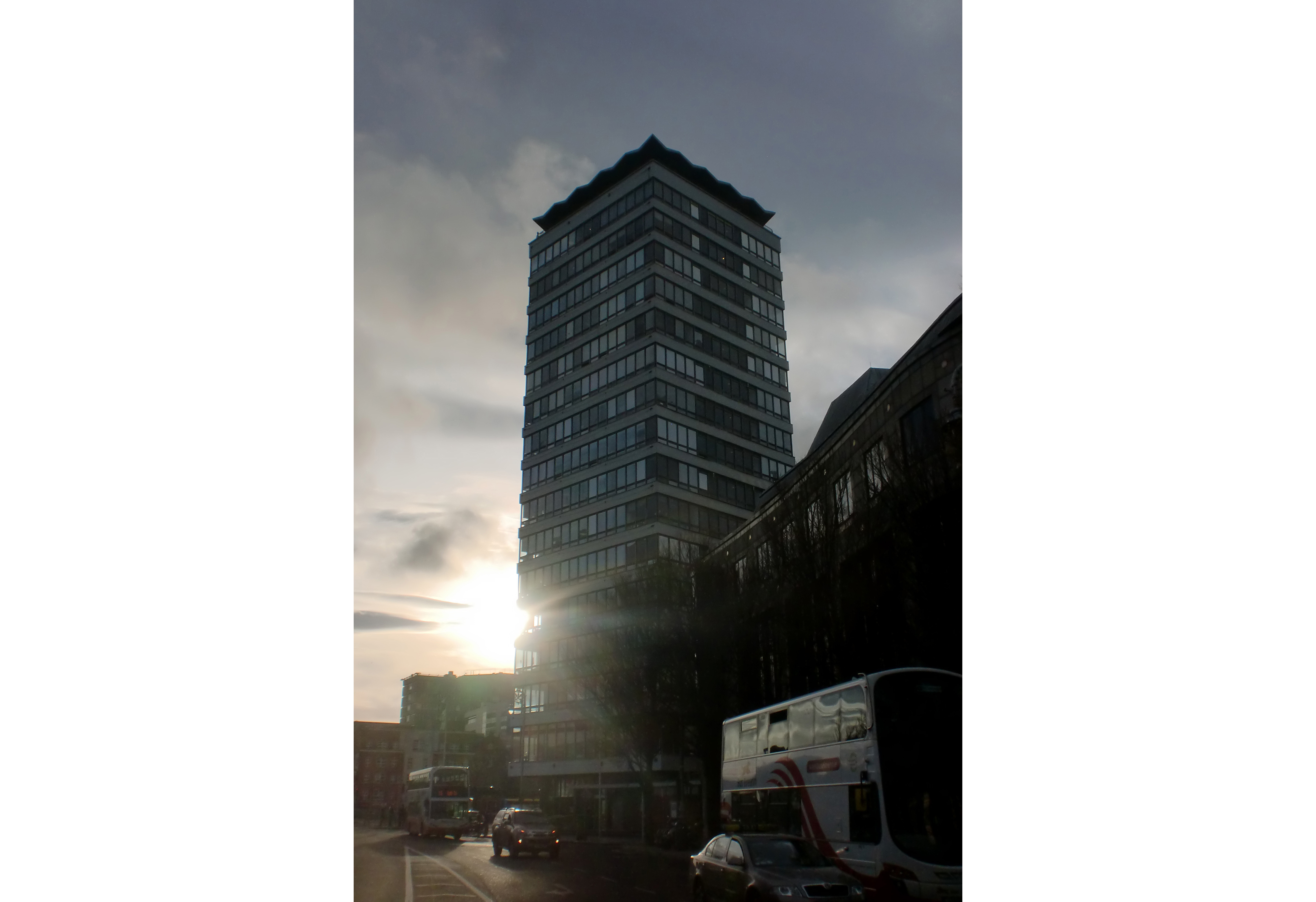 Liberty Hall. The original building, a union hall, served as the headquarters of the Irish Citizen Army. It was completely leveled by British artillery during the Rising.

Frank tells us the background to the 1916 Rising as we travel along the River Liffey. This is ideal for those who don’t know much about Irish history or who need a refresher course in the main events.

“That’s where the Irish parliament was located prior to the Act of Union in 1800,” Frank says as we pass by the Bank of Ireland on College Green.  “From that moment on, Ireland was ruled directly from England but almost immediately, politicians such as Charles Stewart Parnell and John Redmond began to campaign for home rule so what we could govern ourselves.”

He continues with a history of the Irish Republican Brotherhood, the secret society that was formed in 1858 with the aim of achieving Irish independence by force and their American sister society, the Fenian Brotherhood (later to be known as Clan na Gael), whose main purpose was to raise funds. He also talks of the Irish Volunteers, a military group set up in response to the establishment of the Ulster Volunteers, who formed in opposition to home rule in Ireland.

“The I.R.B. infiltrated the Irish Volunteers, which meant you had those who supported Home Rule and hard core rebels in the same group,” says Frank. “There were two agendas, but one was hidden.” 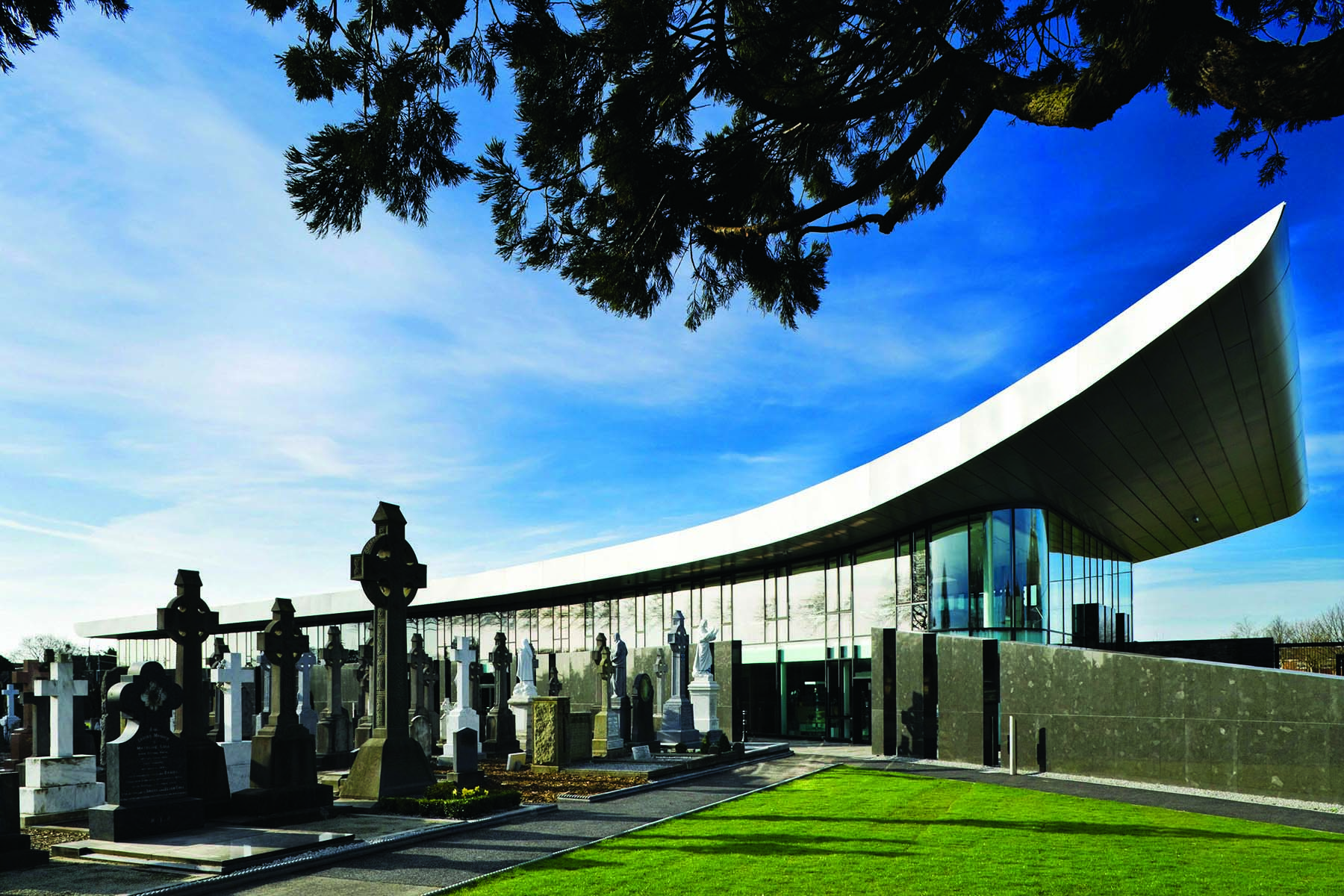 Glasnevin Cemetery, where many of those who took part in the Rising are buried.

By the time Frank finished telling us the background to the Rising, the bus had pulled up outside Liberty Hall, one of the tallest buildings on the Liffey. “This was the headquarters of the Irish Citizen Army, a group set up to protect striking workers that was headed by James Connolly,” explains Frank. “The Irish Citizen Army took part in the Rising and it was here that they and the Irish Volunteers gathered on the morning of Easter Monday, 1916.”

The Proclamation of the Republic was printed in Liberty Hall, too. Of the 2500 copies printed, only 40 remain. “You’d make a pretty penny if you had an original today,” laughs Frank.

He also informs us that Liberty Hall’s location on the river made it one of the first targets for attack by the British. It was reduced to rubble by the gunship, the S.S. Helga.

“When the building that stands today was built in the 1950s, it was built sixteen stories high,” says Frank. “There was one story for each of the executed leaders of the Rising.”

The General Post Office after the Rising, and how it looks today.

We begin our walk through Dublin’s city center from Liberty Hall. We march, just as the rebels did on that fateful Monday morning, to the General Post Office.

“The rebels took over the Four Courts, Jacob’s Biscuit Factory, the Royal College of Surgeons, Boland’s Mill, and the G.P.O.,” says Frank. “These were points that controlled entry to the city, and the G.P.O. was the center of communications.”

Frank points out sites of interest as we walk in. There’s the memorial to James Connolly at Beresford Place. There’s the Abbey Theatre.

Wynn’s Hotel where in 1913 a number of women gathered to form an organization to work in conjunction with the Irish Volunteers. That organization became known as Cumann na mBan.

“A play of Yeats’s, Cathleen Ní Houlihan, was showing here during Easter Week and it was very nationalistic,” he says. “After the Rising, Yeats asked if his play had sent young men out to die for Ireland.”

“And here is Wynn’s Hotel,” he says, a little further down the road. “Cumann na mBan was founded here.  They were the women’s ancillary group of the Irish Volunteers and played an important part in the Rising. We should remember that people like James Connolly were feminists. They wanted women to have the same rights as men.”

Soon, we’re on O’Connell Street, Dublin’s main thoroughfare and the heart of the 1916 Rising. We enter the G.P.O. and Frank tells us that a museum is currently being built just off what is still a functioning post office. It is due to open in February, just in time for the 1916 commemorations. 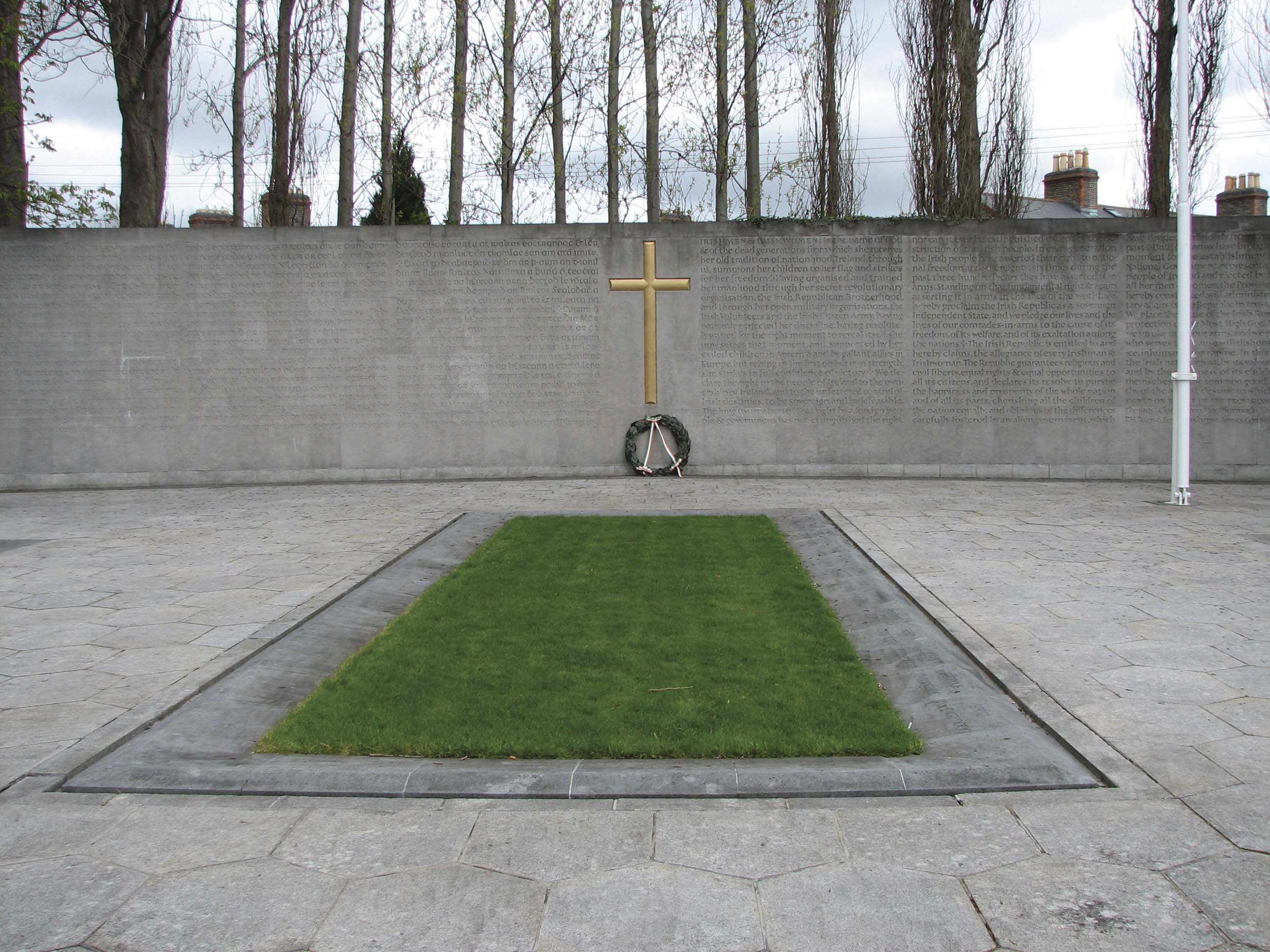 The burial spot of the Leaders of the Rising, in the yard of Arbour Hill prison. The memorial was designed by G. McNicholl. The Proclamation of 1916 is inscribed on the wall in both Irish and English.

Future tours will visit the soon-to-be-opened museum but because it’s not yet open, we make do with Frank telling the story of what happened here in 1916. “The first thing the rebels did was secure the building and knock out all its windows so they could defend it,” he says. “Then Pádraig Pearse read the Proclamation of the Republic on the steps outside.” He didn’t get a rousing reception. Most people didn’t understand what was going on. However, by the time the British had sent over military reinforcements a few days later, people realized exactly what was happening. This is not to say that they supported the rebels. Martial law had been declared in the city and much of the center had been shelled and leveled.

In fact, if you cast your eye down O’Connell Street, counting just how many modern buildings there are, you quickly realize just how much was shelled and lost. The city center was devastated and most people were furious the rebels had brought about such destruction.

As we walk towards Parnell Square, Frank recounts how the rebels eventually had to retreat from the G.P.O. to a small building on Moore Street. “It was from there that Pearse saw three civilians bearing white flags being shot,” says Frank. “That was when he knew he had to surrender.” 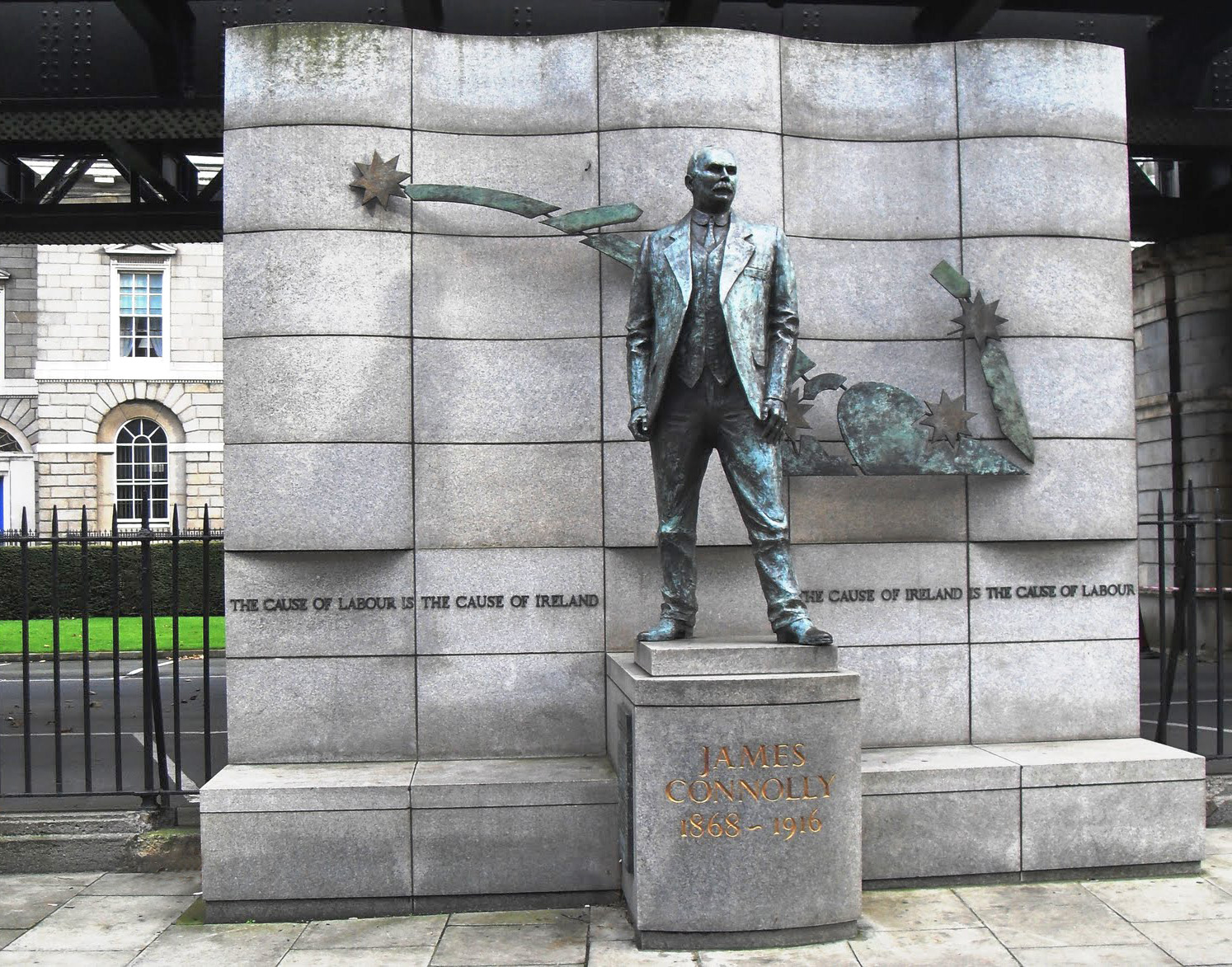 But that was not the end of the story, nor is it the end of our tour. Frank points to the Gresham Hotel, which became the place of surrender for rebels from points all over the city. He tells of how the citizens of Dublin jeered at the rebels, because they were so angry with them.

He also describes the executions of the rebel leaders, which took place after the Rising and how thousands were sent to prison camps abroad, including many who had played no part in the event.

“All of that changed people’s opinion of the rebels,” says Frank. “They were jeered at in the immediate aftermath of the Rising, but when those prisoners returned home, they did so to a heroes’ welcome. People were now on the rebels’ side and Ireland had started on the road to independence.”

The CIE tour follows this road far beyond Dublin’s city center. It continues to Kilmainham Gaol where the rebels were imprisoned and shot.  An austere and imposing prison building, this jail represented the end point for many of Ireland’s rebel leaders.  In fact, in the time from when it was opened in 1796 to when it was decommissioned in 1924, every significant Irish nationalist was held here (with the notable exceptions of Daniel O’Connell and Michael Collins). The men who fought in uprisings in 1798, 1803, and 1867 were imprisoned here and so were the leaders of the 1916 Rising. As a result, Kilmainham is suffused with the spirit of struggle for Irish freedom. 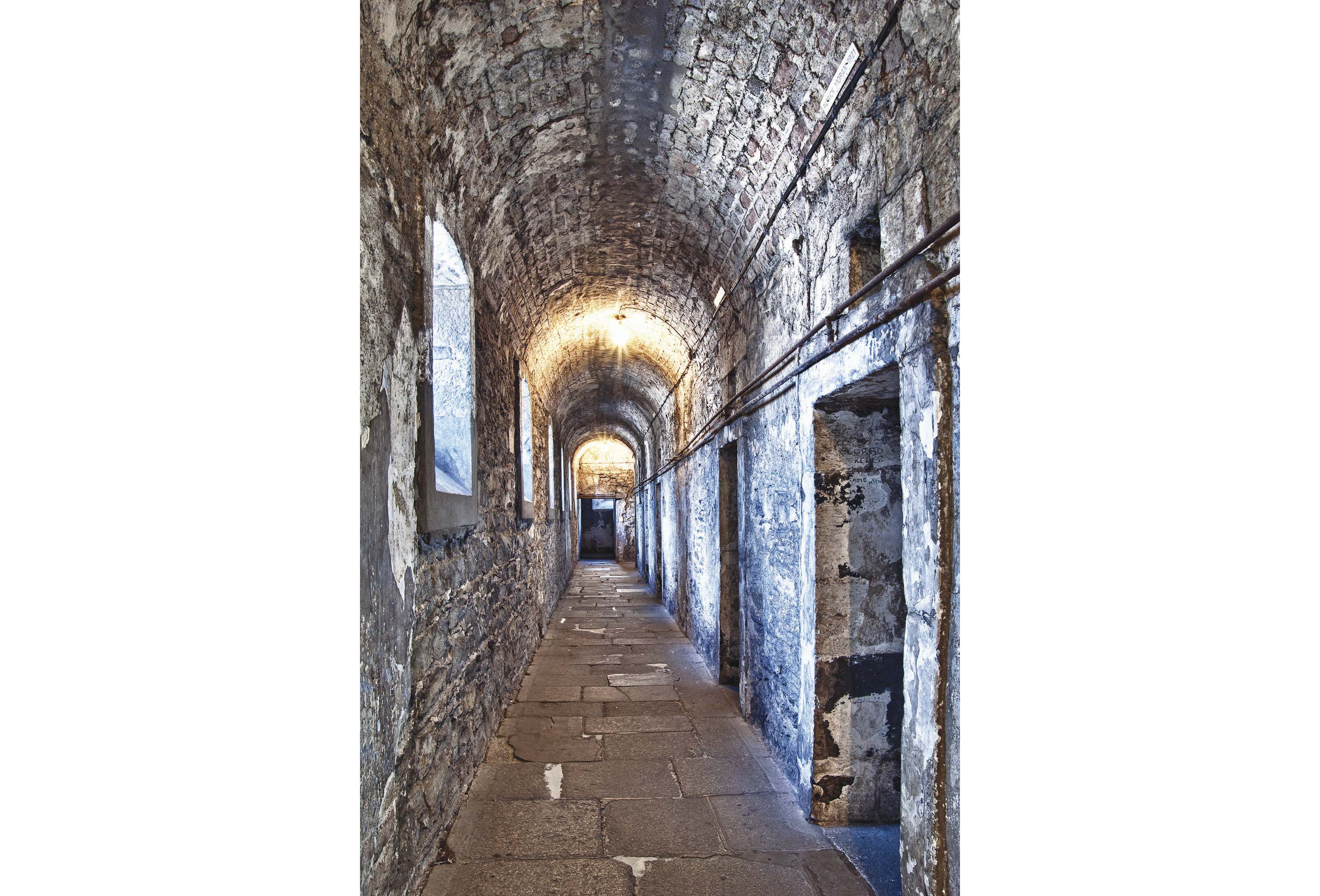 Kilmainham Gaol where the leaders of the Rising were imprisoned.

The tour takes us through the entire prison complex. We are taken into one of the cells where the prisoners were held; cold, damp, and dark places that embody despair. We are taken into the stone breakers’ yard where between the 3rd and the 12th of May, 1916, the rebels – Pearse, Clarke, MacDonagh, Plunkett, Daly, Hanrahan, Willie Pearse, MacBride, Ceannt, Malin, Heuston, Colbert, MacDiarmada, and Connolly – were all systematically shot.

We visit the exhibition, which details the history of the prison and contains mementos left behind by the rebels. One example is Thomas Clarke’s final letter to his wife, which contained a message for all of Ireland. “I and my fellow signatories believe we have struck the first successful blow for freedom,” he writes. “The next blow, which we have no doubt Ireland will strike, will win through. In this belief we die happy.”

These words have a special resonance in this eerie building and at the end of a day spent walking in the 1916 rebels’ footsteps. They also marked the end of my time touring with CIE, although the 27 others were to spend nine further days exploring Dublin and Ireland as part of the full tour package.

Their journey was to take them to Arbor Hill and Glasnevin Cemetery, where many of those who took part in the Rising are buried, and the Pearse Museum, which is located in the former home of Pádraig Pearse, the leader of the Rising. 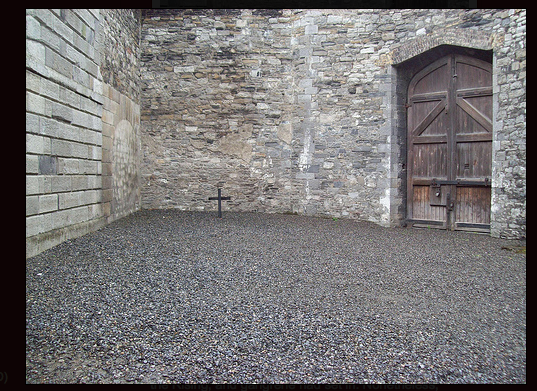 The yard where they were executed.

The CIE tour takes tourists to places outside Dublin, including the site where Michael Collins was shot during the Irish Civil War, and Banna Strand, where Roger Casement was arrested trying to land arms in the days before the 1916 Rising.

CIE tourists see other historic and scenic spots too.  There’s the medieval rock of Cashel and Blarney Castle where they would kiss the famous “stone of eloquence.” The tour also takes in the spectacular Ring of Kerry, Cliffs of Moher, and the Giant’s Causeway, not to mention guided tours of Cork, Galway, Waterford, Athlone, Drogheda, Belfast, and Derry.

Guests are driven to each stage of this journey on a luxury coach. Their hotels and meals are organized for them. And they have a local guide like Frank to give them all the insight they needed as they travel. What a real holiday! ♦

For more information about these guided tours, see cietours.com.

One Response to “The Rising: A Guided Tour”