The 1916 Proclamation of the Irish Republic has been called the most important document in Irish history, establishing the idea of equal rights across gender, fair labor practices, and conferring the right of self-governance from the provisional government to the people. It was based in part on a similar proclamation of independence issued by Robert Emmet during the 1803 Rebellion.

While its authorship is not known for certain, Pádraig Pearse is believed to have contributed the majority of the language of the Proclamation, with additional input from James Connolly and Thomas MacDonagh, particularly with respect to the document’s socialist passages.

Unsurprisingly, America is the only foreign country specifically mentioned in the Proclamation, which singles out Ireland’s “exiled children” in the U.S. as a primary body of support for the Rising, almost certainly a reference to Fenian leader John Devoy. A reference to Ireland’s “gallant allies in Europe” refers specifically to Germany, whose guns and ammunition were meant to land prior to the Rising but were captured. But beyond this, the Proclamation linked the Rising to all previous risings, claiming an inherited right to armed rebellion and a right to speak for the Irish people.

The drafting of the Proclamation was one of the final tasks of the Irish Republican Brotherhood Military Council.

According to Tom Clarke’s wife, Pearse was asked to submit a draft of the Proclamation to the I.R.B. Military Council on the Tuesday before Easter Monday for final approval, where additional council members weighed in to finalize the language. Once the language was final, a master copy was given to printers to hold until Easter Sunday, when the full print run would be completed.

The actual printing of the Proclamation was done in the basement of Liberty Hall on what was even then an antique printing press. The document, printed on 30 x 20 inch poster paper, had to be run off in two passes, because there were not enough typesetting letters to cover the entire text. This accounts for the discrepancy in ink shade between the top and bottom half of the original documents. Indeed, the Proclamation was printed in such a rush that when British troops raided Liberty Hall, they still found the typeset in the printer for the lower half, and many printed off these half-pages as souvenirs.

Of the roughly 1,000 original copies that were printed on Easter Sunday, less than 50 remain. ♦ 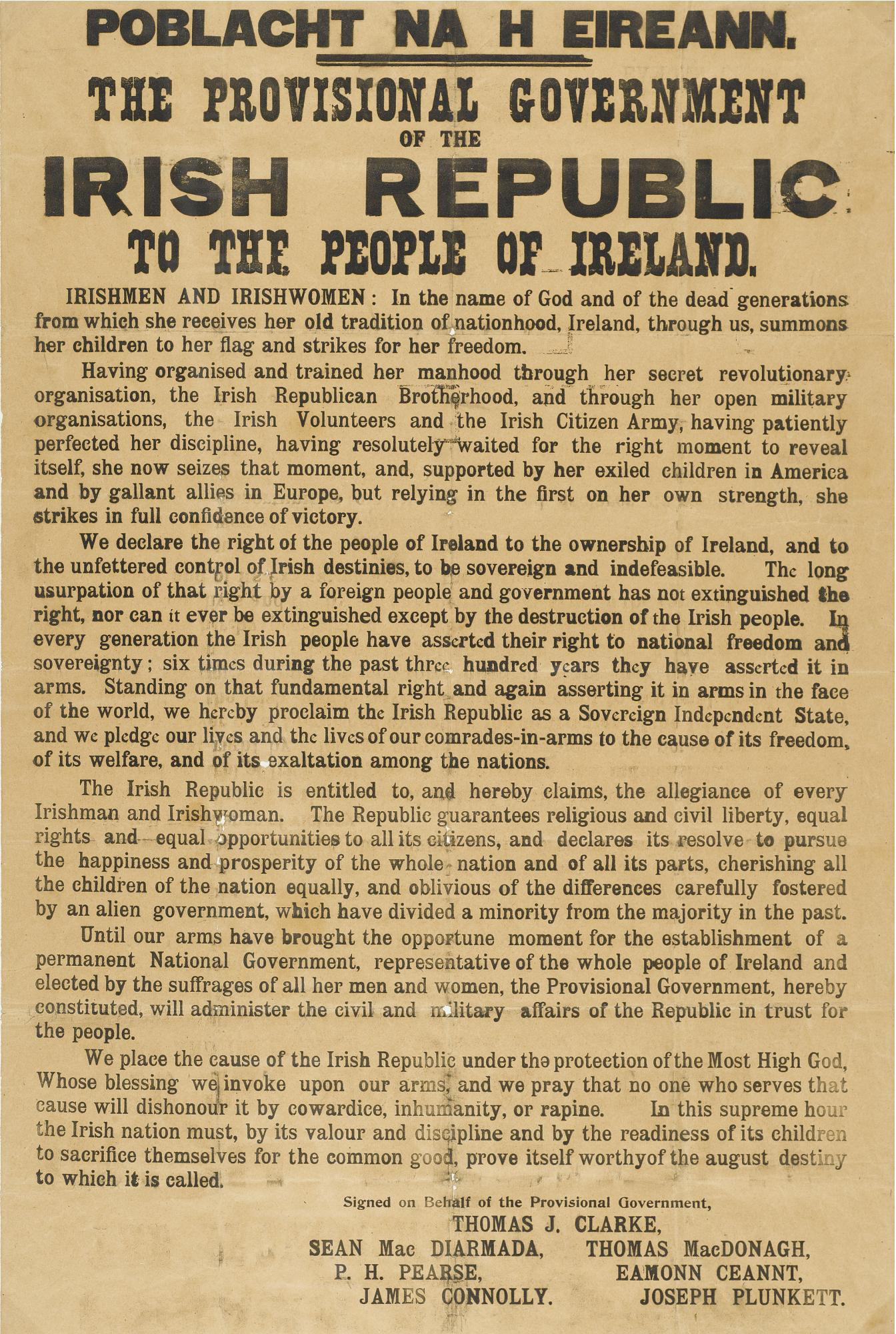 One Response to “Printing the Proclamation”