Minister of State for the Diaspora Jimmy Deenihan.

In early December of 2015, the Irish government launched a campaign to bring its emigrants home to help grow the economy. Inspired in part by #hometovote, the hashtag that urged Irish abroad to come home to vote in the marriage equality referendum, the #hometowork campaign displayed posters in Ireland’s major airports just in time for heavy holiday traffic. One poster showed a young emigrant returning home, suggesting “Make your Christmas commute shorter next year. Come #hometowork in 2016.” A cleverly placed follow-up greeted travelers in the departure sections of the airports, reading, “Slán go fóill. Hope to see you again soon… Have you thought about making 2016 the year you move back to Ireland?”

Minister of State for the Diaspora, Jimmy Deenihan, announced the initiative at last year’s Other Voices festival in Dingle in a speech that stressed both the economic and familial.

“We want to see our emigrants returning to play their part in rebuilding their economy, bringing home their experience to take up some of the jobs that are now being created,” he said. “We want them back amongst their families and friends.” 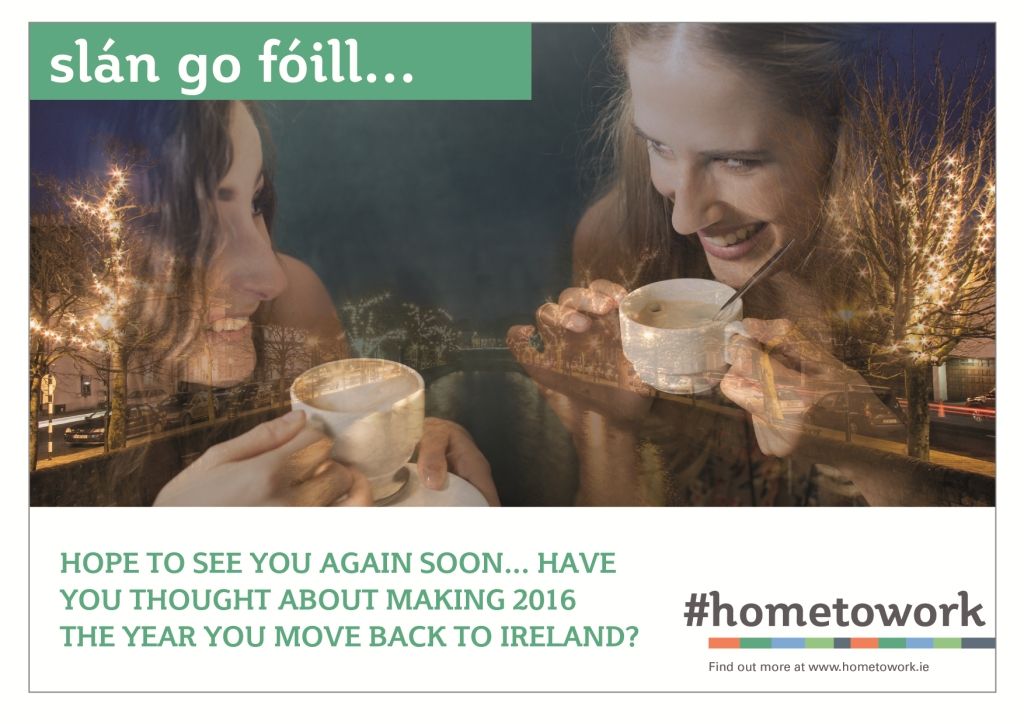 Indeed, the Irish economy is growing, with over 1,000 new jobs being added weekly, and the unemployment rate has dropped below 9% for the first time since 2008. The government plans to have that rate down to 6% by 2020 and to have recovered all jobs lost in the recession by 2018. Economic growth won’t affect just the major cosmopolitan centers, either; a €250 million regional jobs program is also being launched to ensure that all of the country recovers together. ♦

One Response to “Ireland Launches Campaign to
Bring Emigrants Back”

In September, 44 political representatives with Irish connections from the U.S., U.K., Canada, Australia, and France...