The launch took place at the Irish Consulate in New York on the morning of January 7th and at the historic Pier A Harbor House in Battery Park, New York that same evening. Pier A was the first landing point for many Irish immigrants after clearing immigration at Ellis Island. The pier was recently acquired and restored by Irish restaurateur Danny McDonald and now serves as a dual bar/restaurant and event space overlooking New York Harbor, the Statue of Liberty, and Ellis Island. 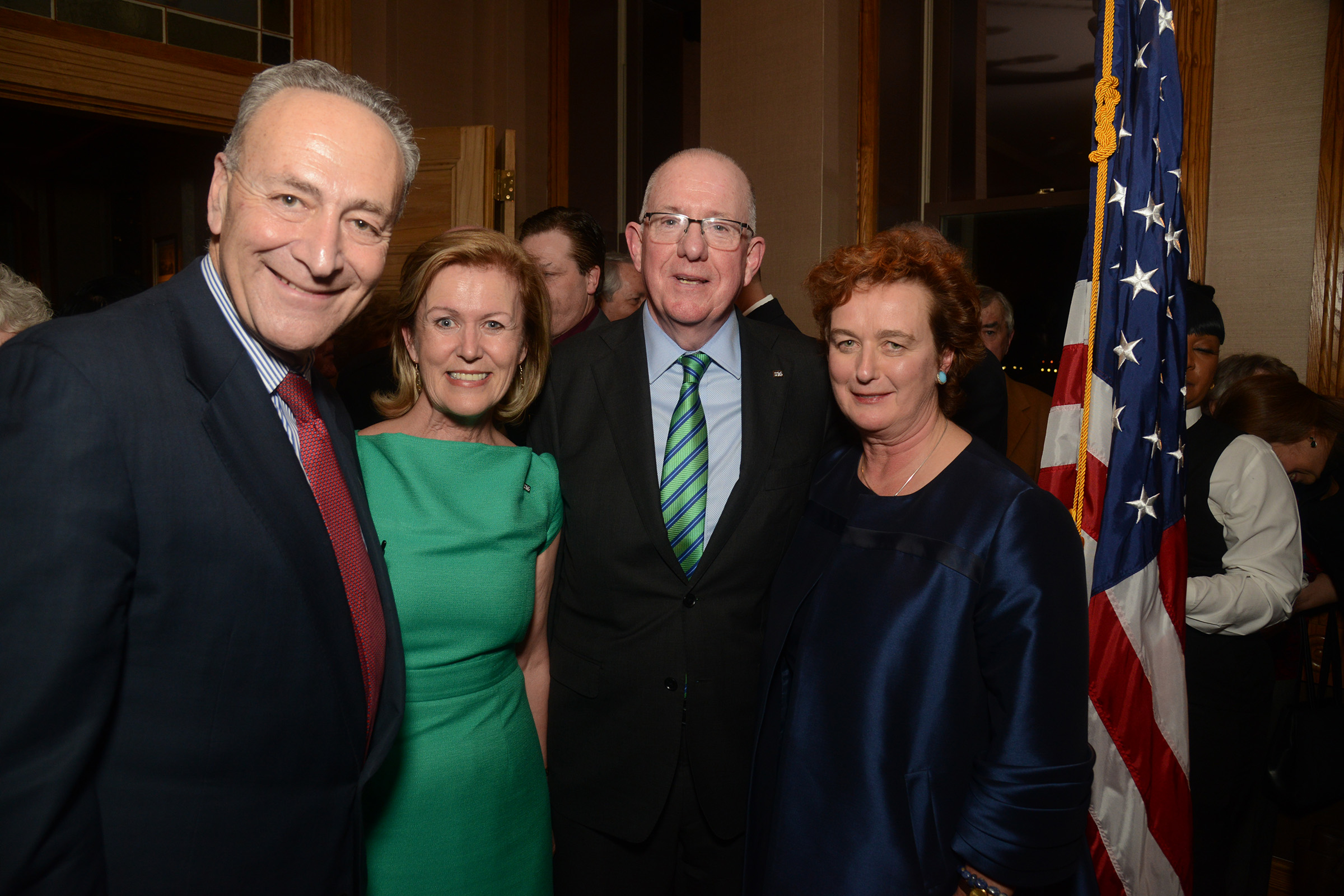 Speaking at both events, Minister Flanagan highlighted the importance of America to the Easter Rising, and the significance of marking the beginning of the U.S. commemorations in New York.

“It is highly appropriate to have this launch here in New York because no other city, and no country, played a more important role in the Easter Rising and the subsequent one hundred year journey for a lasting and just peace settlement, than the United States,” he said. 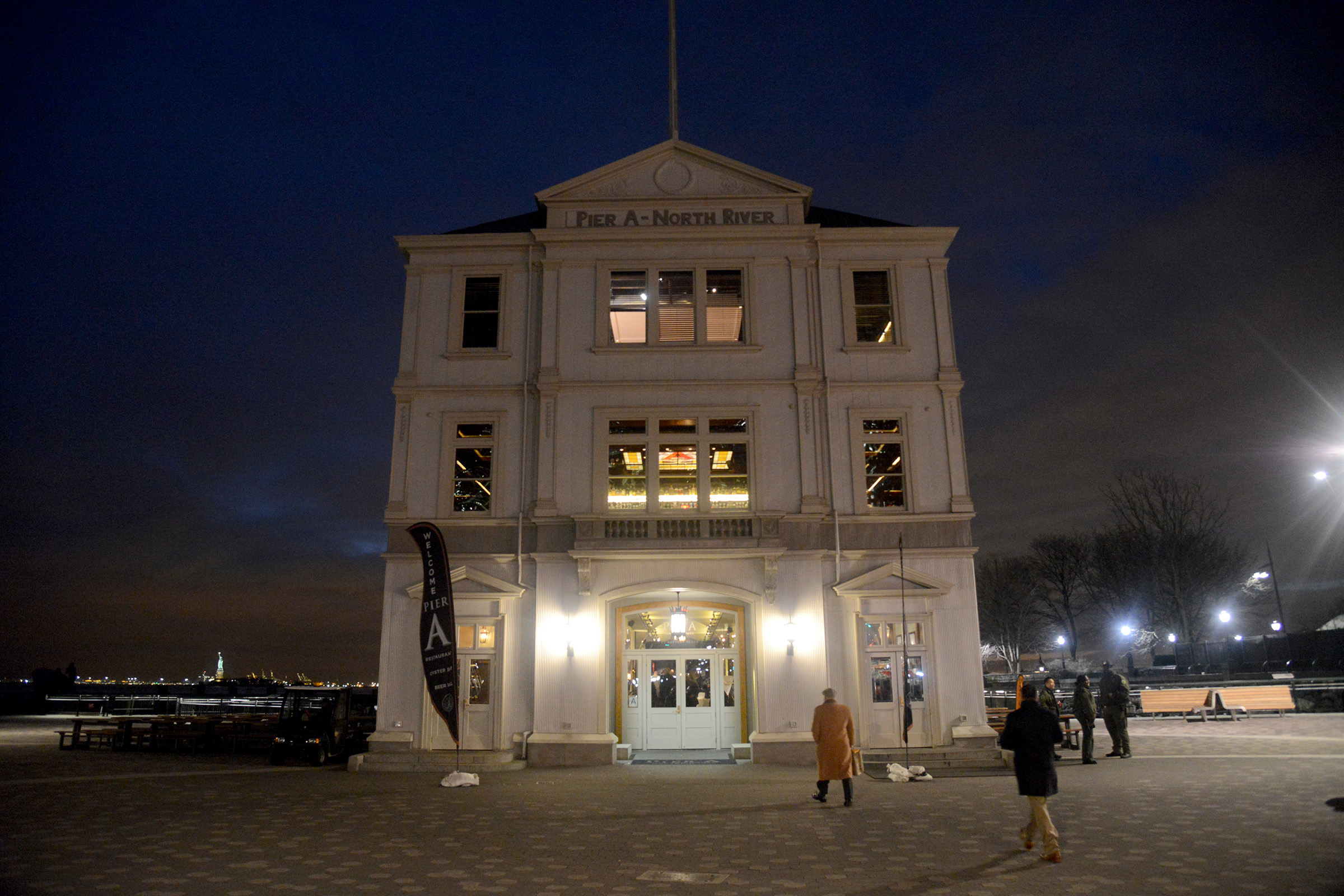 “Such was the United States’ role that ‘America’ is the only foreign country specifically mentioned in the Proclamation of the Republic, which itself has echoes of the American Declaration of Independence.

“Moreover, the significance of the Rising was immediately recognized here – news of the events in Ireland made the front page of the New York Times for 14 days straight in April and May 1916,” he said.

The centenary program in the United States, which is part of the Ireland 2016 Global & Diaspora Program, is being organized and supported by the Embassy of Ireland in Washington, D.C., Culture Ireland, and the Irish Consulate Generals in New York, Boston, Chicago, Austin, Atlanta and San Francisco, together with many Irish-American partner organizations. 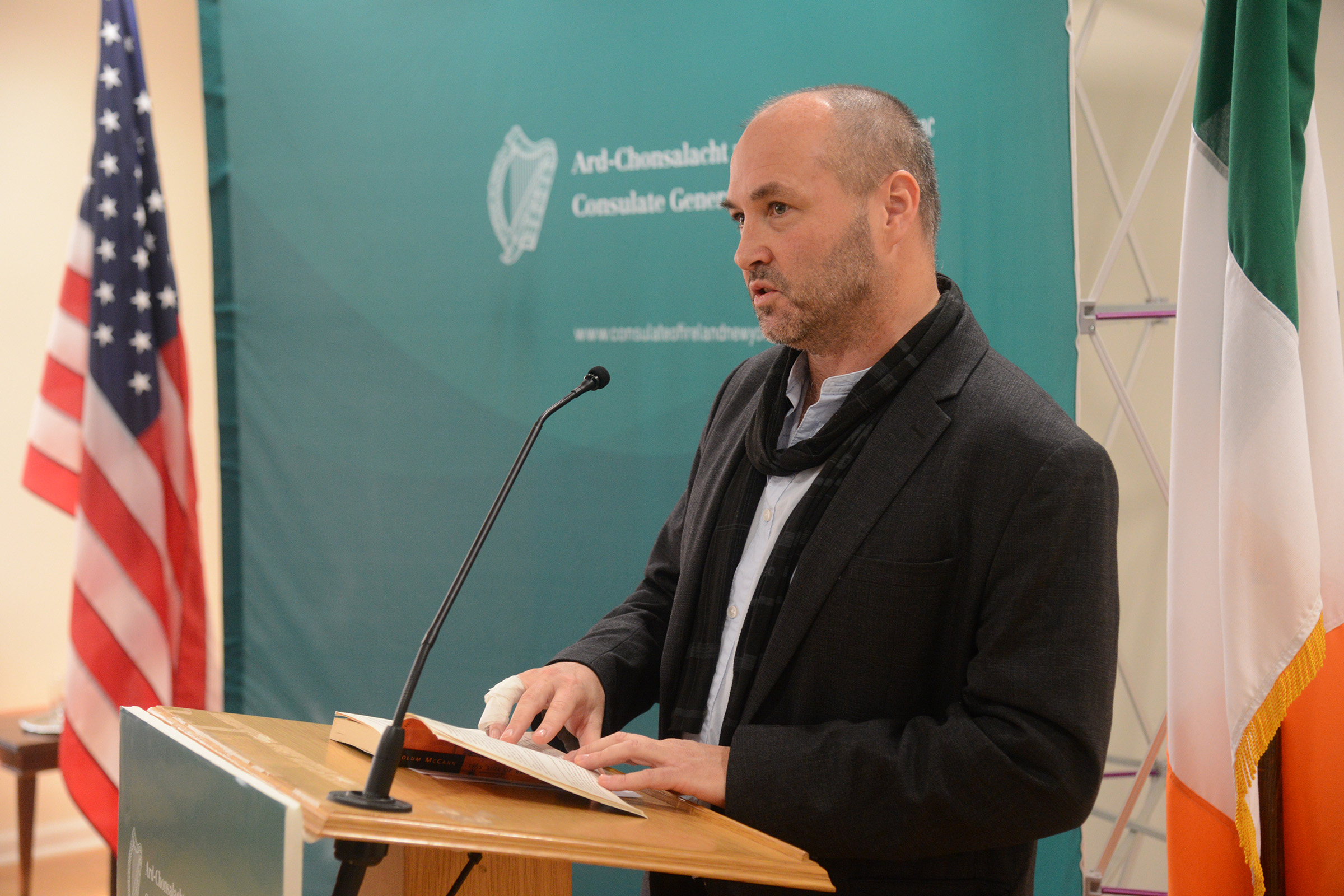 Author Colum McCann reads from one of his novels at the launch. (Photo: James Higgins)

“America has always been an important oxygenating ground for Irish artists. Indeed that relationship is a complex one and many of the artists who live here flitter between Ireland and the United States regularly,” said Mary McCarthy, chair of Culture Ireland, which is coordinating many of the cultural events throughout the US under the banner, “I Am Ireland.”

“There’s no more relevant time [than now] to allow a space for dialogue, and indeed where globally, culturally, the arts create a space for tolerance and discussion and openness,” she said.

Over 200 commemorative events will take place across the United States in the course of the year, including over 70 events in New York. The highlights will include The Bloody Irish a musical drama set in 1916 during the week of the Rising – a two-week run on Broadway (April 10-24) will be followed by an East Cost tour. And a three-week Irish Arts Festival taking place at the John F. Kennedy Center for the Performing Arts in Washington, D.C. from May 16 to June 5, that will feature contemporary Irish artists, actors, dancers, and singers, including actress Fiona Shaw, dancer Jean Butler, writers Colum McCann, Anne Enright, and Colm Toibin, as well as the contemporary trad group The Gloaming.

“I think what we have to do and I think what has been done so successfully is the opportunity to re-proclaim who we are,” Colum McCann said at the launch.

“One of the things that I feel very confident in saying is that our leaders and our diplomatic corps have done an amazing job all around the worked in making our culture into the nuanced signifier that it is. And most importantly, instead of just looking backwards, which would be the temptation for so many, we’re also going to look forwards and reclaim that territory and continue to do the work that we set out to do, which is to expand the lungs of our Irish culture,” McCann said. 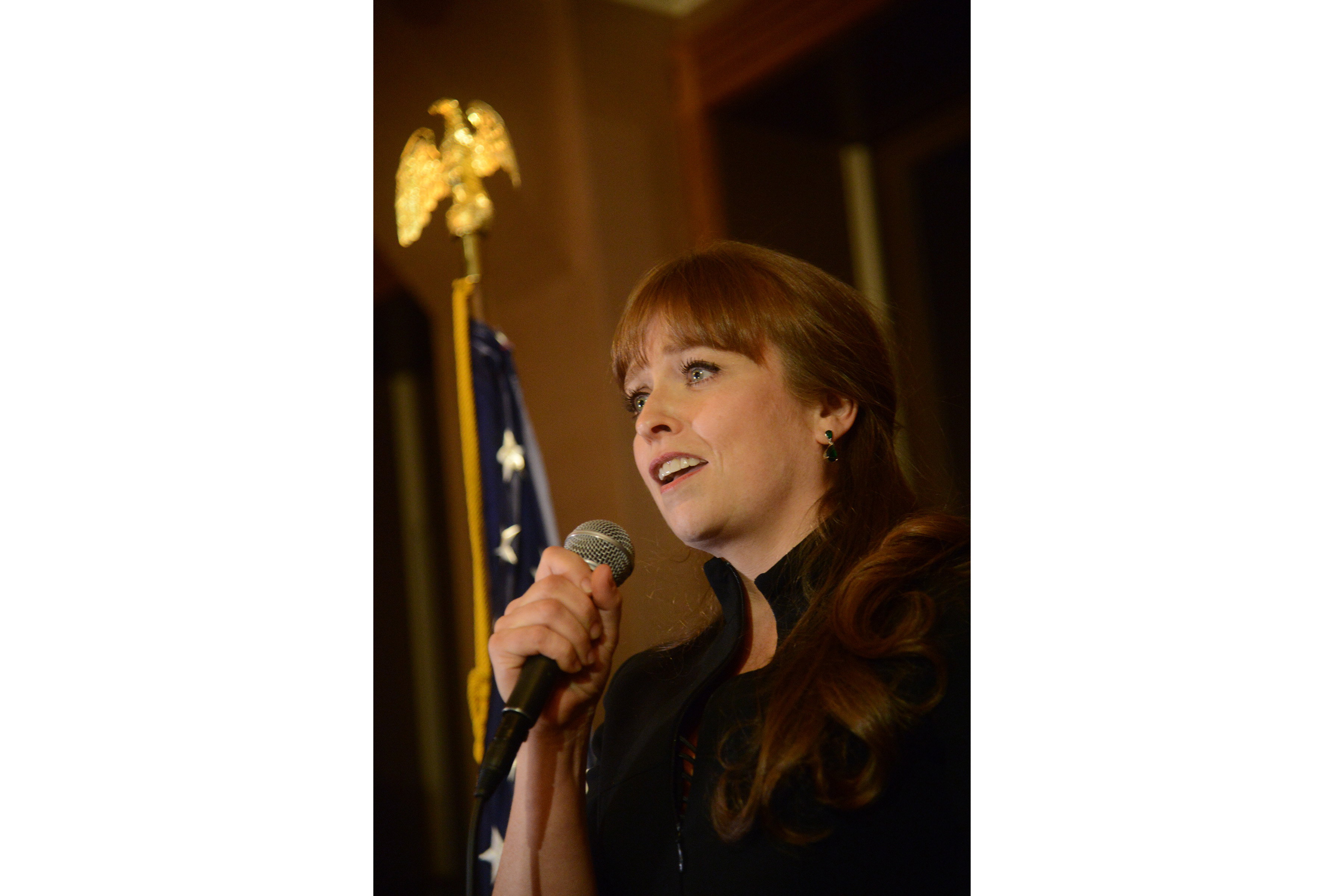 While the emphasis on contemporary Irish arts and culture and dialogue as a way of remembering the events of 1916 is seen by some to represent a de-politicization of the Rising, Minister Flanagan re-asserted the bi-partisan planning process for the celebrations to Irish America and said the range of events is to highlight all aspects of the Irish identity over the past 100 years.

“The consultation process was far and away beyond the political engagement, and I believe that’s very much reflected in our program nationally and our program internationally,” he said.

“The program is rich and varied over the entire gamut of pursuits – artistic, cultural, academic, education, economic. And while we reflect on the momentous and turbulent events of 1916 we also reflect on the 100 years since then and the real importance of the relationship between Ireland and America,” he told Irish America. 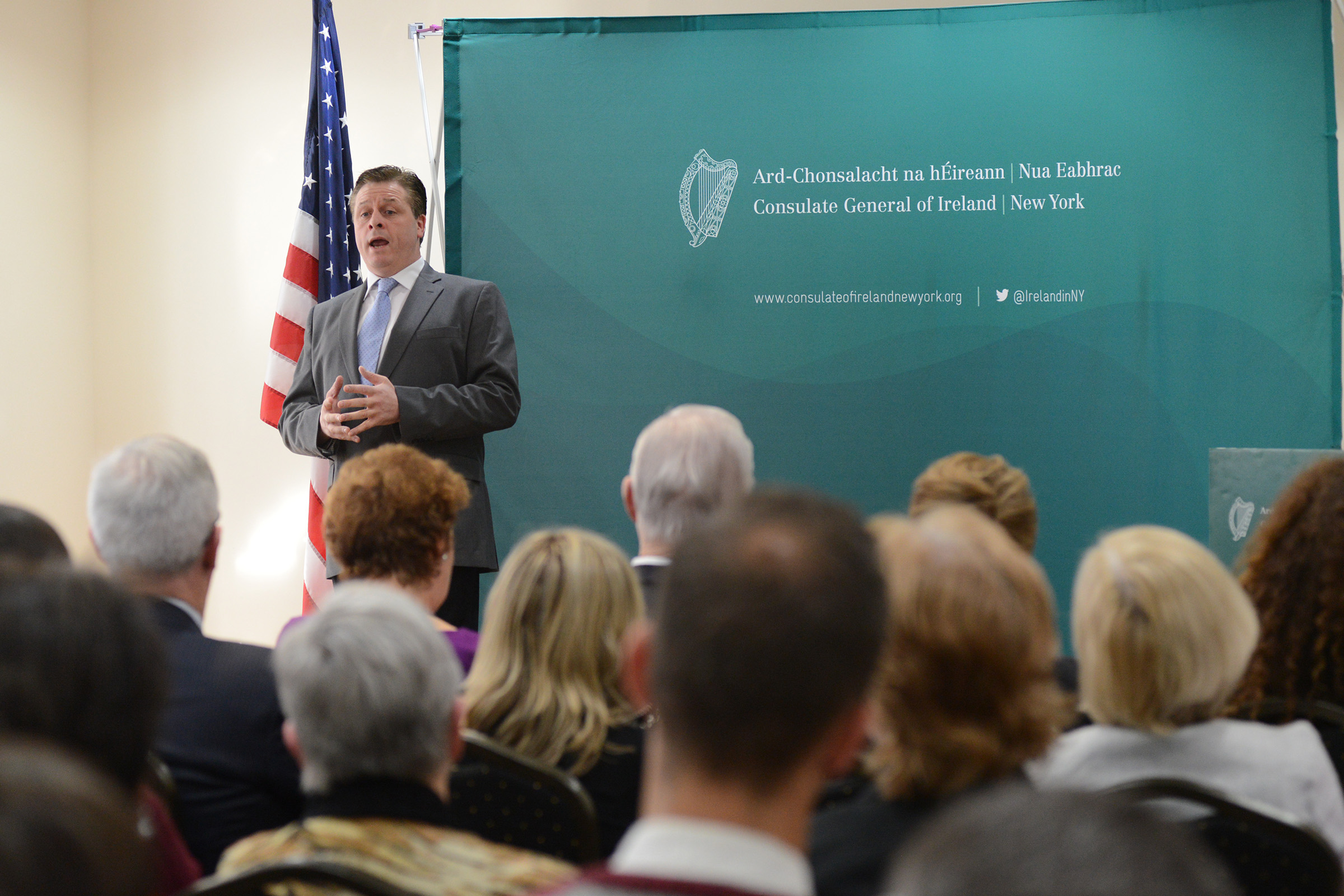 Irish Tenor Anthony Kearns sings at the event with Minister for Foreign Affairs and Trade Charlie Flanagan launching the 2016 Centenary Programme in the United States of America today in New York at the Consulate of Ireland. (Photo: James Higgins)

In addition to celebrating the legacy of the 35 million Americans of Irish descent, Flanagan told Irish America that a further aim of the U.S. commemorations is also to educate “who perhaps are not as knowledgeable” about the special relationship between the two countries and to reflect on “the contribution that Ireland has made to America across a range of pursuits, be it political, economic, cultural, artistic, literary, or in sporting,” he said.

Another highlight of the centenary year will be “1916: The Irish Rebellion,” a feature documentary on the Rising produced by the University of Notre Dame and narrated by Liam Neeson, who attended the launch party at Pier A. The documentary will be screened in various cinemas throughout the U.S. as well as air on PBS in April.

In terms of what is hoped from the year of commemorations, celebrations, and cultural events, Irish Tenor member Anthony Kearns, who sang “Isle of Hope, Isle of Tears” about the first Irish immigrant to land on the Ellis Island, in addition to other songs, said he hopes for Americans to gain a better understanding of the historical import of 1916 to Ireland.

“I know a lot of people would know some history of Ireland but I think they get a deeper understanding of the people of Ireland and what they have gone through and what they’ve experienced down through the years,” he told Irish America.

“They’re an independent people and they’re a proud nation and 1916 will highlight a lot of the ups and downs in what Ireland has gone through to become a free country and an independent country.” ♦