What Are You Like?
Michael Flatley: The Last Dance

Michael Flatley, 57, who has turned traditional Irish dancing into an international phenomenon, is retiring. It’s been his dream since he was a little boy to be on Broadway and that’s where he will be through the end of this year with his new dance show, Lord of the Dance: Dangerous Games, which opened at the Lyric Theatre on November 10th to wide acclaim.

The son of Irish immigrants, Michael grew up in Chicago. He has three sisters, Anne-Marie, Eliza, and Thomasina, and a brother, Patrick. He took his first dance lessons at age 11 – a relatively late start – but from the beginning his teachers knew he was something special. After winning all the top awards in the Irish dance world while still a teen, he went on tour with The Chieftains, the great Irish traditional group. But making a living as a dancer was hard. When he wasn’t on the road he supplemented his income working at this father’s construction company. All that changed utterly when he choreographed and performed in Riverdance, which ran as the interval show at the 1994 Eurovision Song Contest to spectacular success. He went on to create Lord of the Dance in 1996, which went on to mesmerize audiences around the world (videos sales are in excess of 12 million.) And In 1998, he exceeded his first Guinness World Record of 28 taps per second set in 1989 with a phenomenal 35 taps per second.

Over the years, while Michael’s brand has become synonymous with spectacular artistry and grand scale productions such as Feet of Flames, Celtic Tiger, and Lord of the Dance. He is also an accomplished flautist, and has produce two albums, including the two-CD collection, On a Different Note, which mixes traditional and contemporary music. And, with the end of his dancing career in sight, he has embarked on a new career as a painter, substituting paintbrushes with dance movements to capture the mystical, performance aspect of his dancing. “Firedance,” his first exhibition of paintings, took place in London in August and reported sales of over €1 million.

While Michael is leaving the stage, Lord of the Dance will go on. “I feel happy to go, happy to let some other really talented, hard-working guys take my place. [Lord of the Dance cast members] James Keegan, James Breen, Matt Smith and Lewis Childs are all great, great dancers who deserve to take over from me,” he said.

Married to Niamh O’Brien, a former lead dancer with Lord of the Dance, the couple currently live in Knightsbridge, London where their son Michael St. James Flatley, who is nine, goes to school, Michael announced in October that he was putting his 18th-century Irish mansion Castlehyde House in Cork on the market. Reports that the death of his father, Michael James Flatley last March was a factor in his decision to sell. Publicly, Michael said, “We made the decision to sell Castlehyde but that doesn’t mean that I will be leaving Ireland. I love Ireland with all my heart and I always will.” 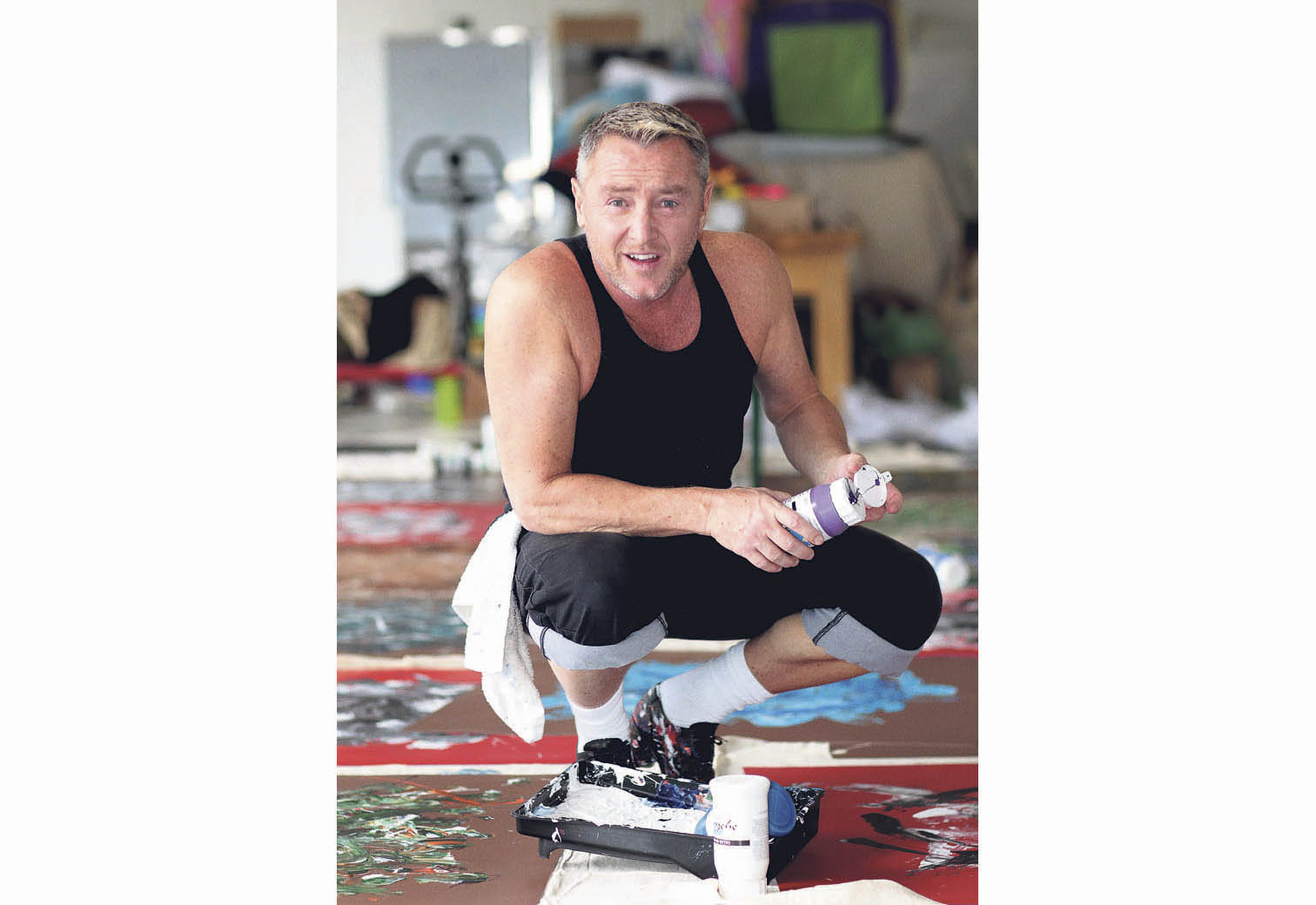 Can you talk about the farewell tour and explain why now?

In the last 20 years we’ve done every major venue in the world and in New York we’ve done Radio City Music Hall and Madison Square Garden several times, but we’ve never done Broadway and that’s the jewel in the crown.

I have given my life to my art and I want to finish while I’m still dancing at the highest level.

Was there a specific moment when you knew it was time to hang up your shoes?

I recently had an eight-hour medical and M.R.I. scan of my whole body and it was immediately apparent from the results that the time is now.

My spinal column and legs have taken a beating over the years.

I would also like to spend more time with my beautiful wife and young son.

I have also been pursuing a career in painting, and I’d like to devote more time to that in the future.

How many pairs of dance shoes do you own? And is there a pair that has a special meaning for you?

I have gone through countless pairs of dance shoes in my career. We have auctioned off most to charities over the years but I’ve kept about 20 pairs from special opening nights at Madison Square Garden, London Hyde Park and the London Palladium.

I have several special pairs and it would be impossible to name one as favorite.

Is there a sense of “I don’t know who I’m going to be without dance?” What emotionally will fill the place?

It’s impossible to replicate the feeling of being on stage with 50 dancers in front of 10,000 people but I’ve achieved that and it’s time for something brand new.

I’m looking forward to new and exiting things including my painting career.

When did you realize that you had a talent for painting, what medium do you use, and from where do you draw your inspiration?

I have been painting for years but never shown my work to anyone until recently. I mainly paint with acrylic on vinyl, which is unusual I know but I like that. I try not to take inspiration from the outside, I want my work to be clean and unique and uniquely mine, so I tend to spend long periods of time on my own inside my own head – that’s what keeps my work different from everybody else. I suppose it’s a form of abstract expressionism. 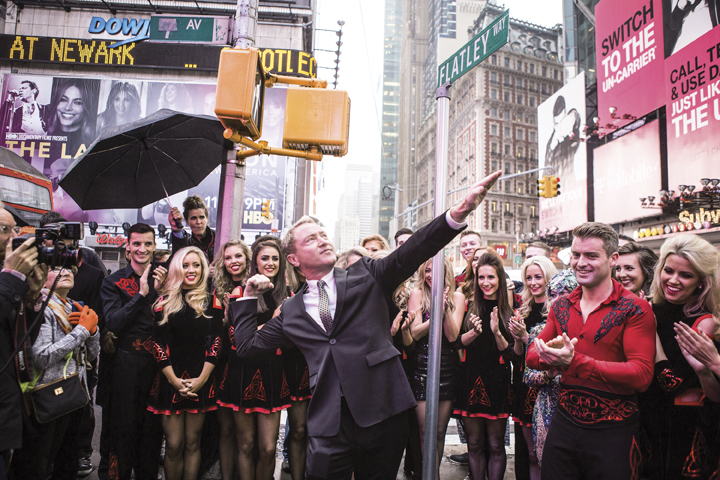 A section of 42nd Street renamed “Flatley Way” to mark the opening of Lord of the Dance: Dangerous Games.

Speaking of unique – you evolved Irish dance from the stiff arms by your side presentation to a more joyful form of expression. Did you take any slack from the traditionalists – any nasty comments for straying from the fold?

Yes, more than I would care to mention!

Change is always difficult for some people, and this new form of dance is only my personal view. I’ve always explained to them that not everybody has to dance like me or the way I see it.

I think all that has eased and dissipated over the years.

I think all purists and dance teachers have had a big increase in the number of pupils trying to get into their schools, and I think that has eased the relationship a little bit. They seem to like me now.

Back in the day, Catholic bishops used to issue statements on the evils of dancing, was that when the stiff upper body style emerged?

I have tried to research that for years and never been able to get definitive answer, so if you don’t mind I won’t pass further comment on that one.

Were you ever an altar boy and did you ever get up to mischief in that role? Michael Fassbender in the latest issue of Elle talked about how he used to sneak some of the wine.

No, I was never an altar boy, but yes I do love my wine!

You played the flute before you took dance lessons.  When, how, and why did you decide to take up dance?

In the beginning I was dragged by my two ears to dance class by my parents.

At the start I hated every minute but soon became proficient – certainly something in my genes – and if you get good at something naturally you begin to enjoy it, and I began to pursue it enthusiastically.

You made it cool for young boys to take up Irish dance. Back in your day, was there a sense that dancing was effeminate?

When I was young and growing up in Chicago, we didn’t tell many of our friends that we were dancers as we weren’t sure they would look on it very kindly.  Those that did know often passed negative remarks. Luckily my brother Pat and I were both amateur boxers [Ed. Michael won the Chicago Golden Gloves competition when he was 17] and so it didn’t bother us as much as most. Today all that has changed, it’s really cool to be a dancer in Lord of the Dance, and we’re taking New York by storm and the lads are loving every minute of it. 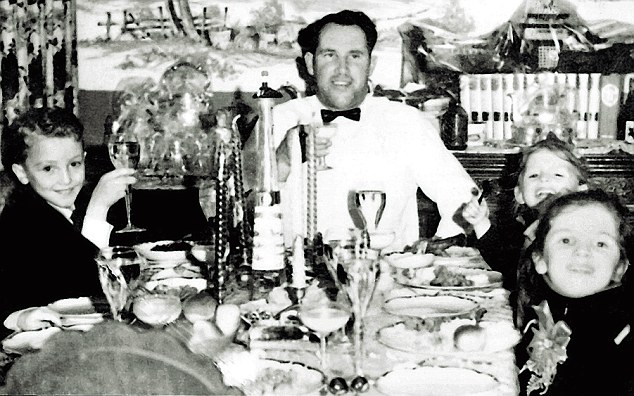 A young Michael with his father at a family Thanksgiving dinner.

In all that you do you seem to be imbued with great self-belief. Where does that come from?

I think if you work really hard at anything in life and become proficient it gives you confidence, and you have to have confidence to succeed at anything in this crazy world. The competition is fierce. You have to be willing to stick your neck out to get anywhere. Never be afraid to push hard, never be afraid to work hard. Never regret things you do in life, only the things you didn’t do.

What do you do now to physically keep in shape?

I run five miles every morning and I rehearse for an hour on stage and then dance in a two-hour show.

Offstage, you seem shy, yet onstage you are quite the showman. Is there ever an inner conflict with both these aspects of your personality?

No, never. People often mistake the man onstage for the person I am.

Is it difficult to be the choreographer, director and the principal dancer in a show?

No, it would be much more difficult to have three different people doing those roles. I think like any great painter you have to paint the whole painting yourself.

Was it difficult to make a living as a dancer in the early days?

It was terribly difficult to make a living. Nobody wanted to hire a dancer, let alone an Irish dancer. I couldn’t get a job as a tap dancer anywhere.

I realized as a young man I would have to cut my own path and create my own show as no one was going to hire me, but I held onto my dream, however impossible it seemed at the time, and I’m thankful I did.

You were 36 when Riverdance burst on the scene. Do you wish fame happened sooner?

I believe all things happen at the right time in this life.  Maybe I wouldn’t have been ready for it any earlier. Maybe I had to learn hard lessons so I can appreciate the success I have now. I take life as it comes and make the best of it. Somebody once said, “Play the cards you are dealt.” And that’s what I try to do. 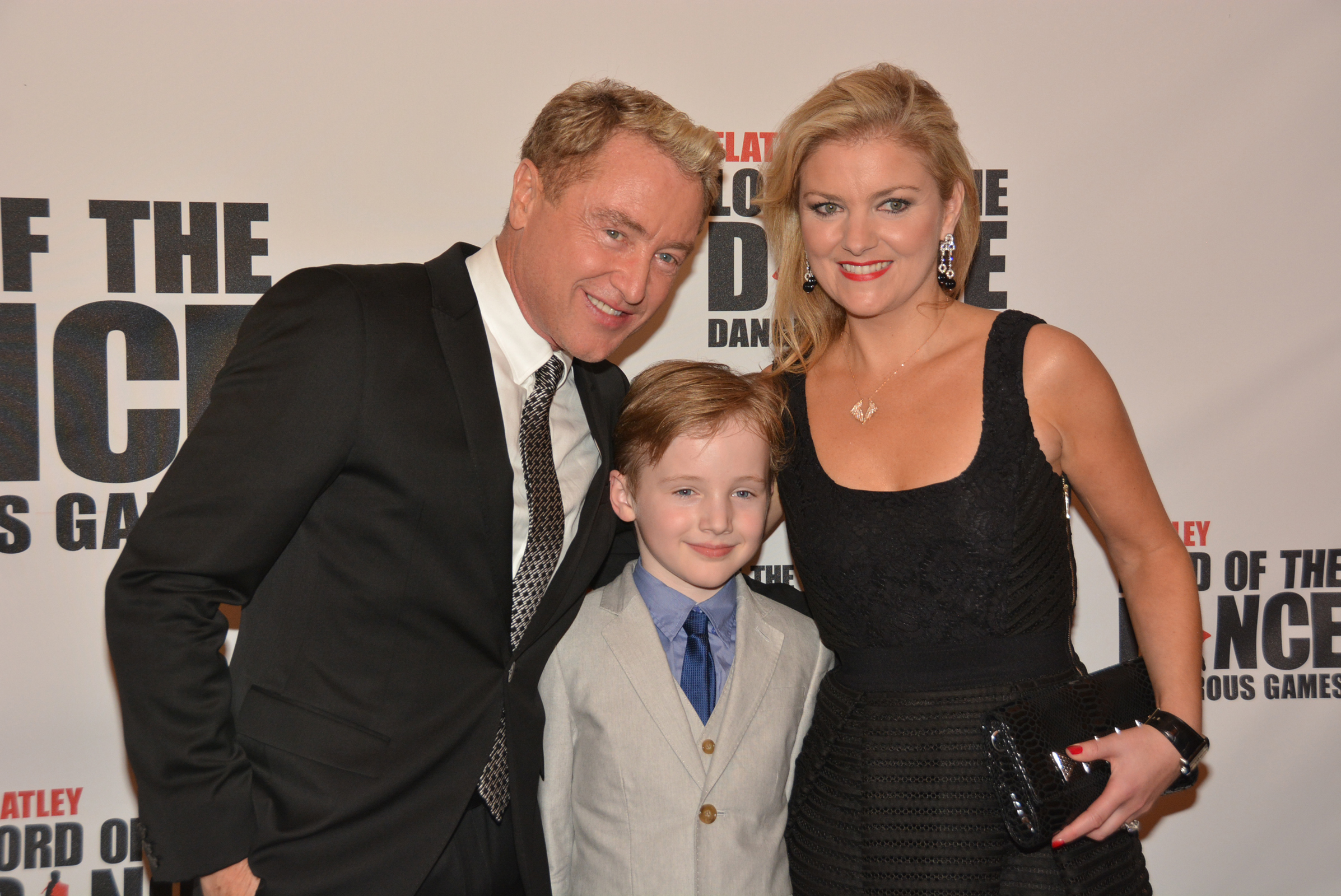 Michael with his wife Niamh and son Michael St. James.

Is there a credo that you live by?

Do you have a hero – someone who inspires you?

My father was my hero. He passed away in March and I miss him terribly.

Do you strike up conversations on long plane rides?

I read a lot and do a lot of planning and work on planes, so I rarely sleep and I rarely strike up conversations.

Favorite first line in a book or a piece of music?

Casablanca, and The Godfather.

There are many things in the pipeline. I’m looking forward to new and different things. I love new challenges and I can’t wait for the next chapter. I will take what comes, but I believe the best is yet to come. ♦