Kathy Buckley outside the White House.

Were she alive today, the odds are that Kathy Buckley would be as well-known as celebrity chefs Jamie Oliver and Nigella Lawson. Sharon Ní Chonchúir profiles the Irish woman who was head cook for three U.S. presidents.

Kathy Buckley was born in Upper William Street in Listowel, Co. Kerry. She was the eldest of seven. Her father worked as a cooper in a workshop at the rear of their house, and her mother came from a long-established family of grocers and shoemakers.

When Kathy was in her early teens she left school to take a job in the kitchen of the Butler Arms Hotel in Waterville. She showed a talent for cooking, and eventually that flair would take her all the way to the White House.

In the early 1900s, a group of wealthy Americans, including one J.P. Morgan, visited the hotel. By now Kathy was head cook, and Morgan was so impressed by her cooking that he asked her to come and work for him in Connecticut.

“Kathy told J.P. that he would have to ask her father first,” says Vincent Carmody, a relative of Kathy’s by marriage. “So J.P. wrote to Lawrence Buckley and he gave his permission, provided that J.P. promised to send Kathy home if she was unhappy or unable to settle in America.”

He needn’t have worried, for Kathy settled in quickly and started to add to her culinary skills. The lavish banquets she prepared in the Morgans’ mansion soon became legendary.

“She told me a story from that time that made her sad,” recalls Patrick Buckley, Kathy’s nephew, who still lives in the house on William Street where Kathy was born. “One day, she was preparing steaks for the Morgans’ dogs to eat and she couldn’t help feeling it was wrong. She knew there were many men in America and at home in Ireland who were starving. She felt guilty giving such good meat to dogs.”

However, Kathy’s own story was not destined to be sad, and it held one more twist in store. J.P. Morgan had Calvin Coolidge, then the U.S. Vice President, to dinner one night and he too was taken with Kathy’s cooking. He was so taken that he asked her to become head of the White House kitchens when he became President.

Kathy retained this position for the duration of his presidency and for the presidential terms of both Herbert Hoover and Franklin Delano Roosevelt. She would look back upon this time with fondness when she eventually retired in Listowel in the early 1950s.

By that stage, she had earned the nickname “Kathy White House” in the town and she often regaled her family and friends with tales of her time among the powerful and famous. The story that stands out for Patrick Buckley is the one she told him about Charles Lindbergh.

“President Coolidge hosted a private reception to honor him for becoming the first solo pilot to cross the Atlantic,” says Patrick. “After the reception, Kathy was one of the people he invited to take a trip with him on his plane. She didn’t like the idea and told him she would rather stay on terra firma. Imagine!” 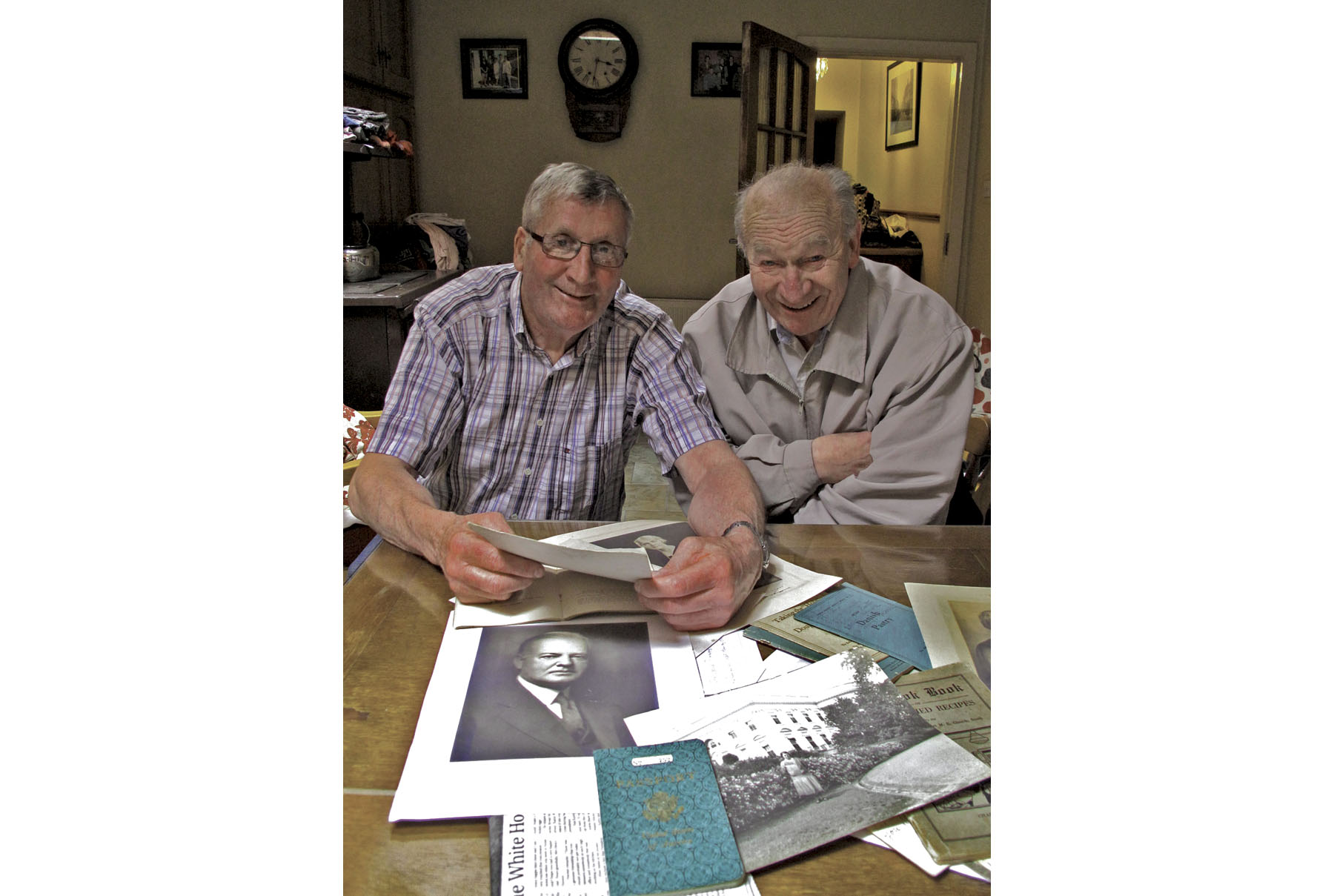 Vincent Carmody and Patrick Buckley pictured in the William Street house where Kathy was born.

The Listowel short story writer Bryan McMahon had stories about Kathy too. His mother Joanna was friends with Kathy and he would often eavesdrop on their conversations. He shared many of these stories with Carmody.

“Kathy told Joanna about a time when the White House staff were lined up to meet a new president,” says Vincent. “When Kathy was introduced as the head of the kitchen, she felt obliged to say that she had never voted for his party and never would. The President might have been taken aback but he told her that was her right as an American citizen. Doesn’t that show the type of character she was?” That president was Franklin Roosevelt.

Another tale shows that same independence of character. Once, Kathy was about to enter the lift when a senior member of the executive, who was already in the lift and didn’t like mixing with the household staff, told her to wait for its return.

“Quick as a flash, Kathy replied, ‘That’s fine, I will share with the President,’ who was coming up the corridor,” says Vincent. “She was a strong woman, never afraid to speak her mind.” 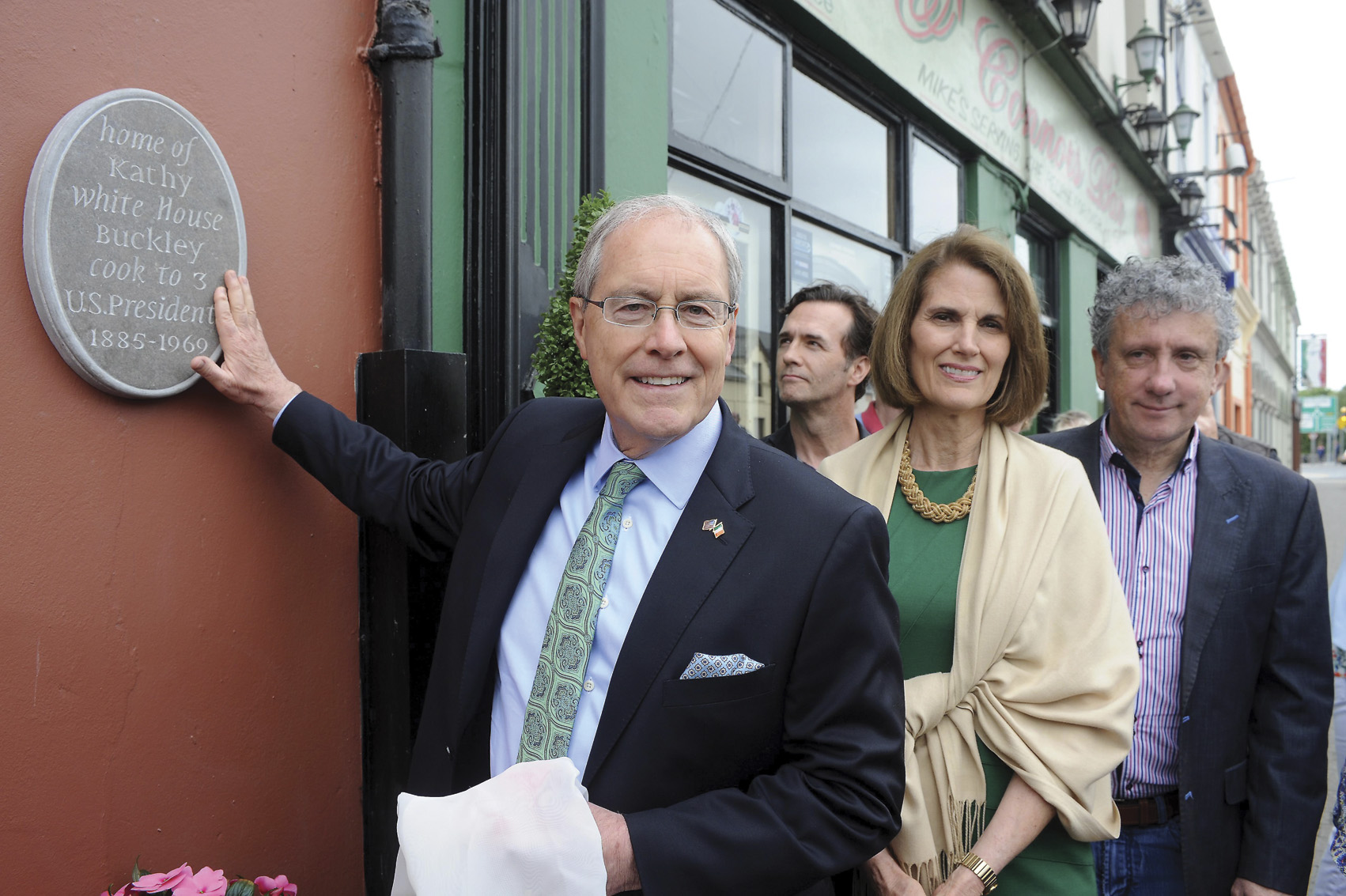 Nevertheless, she was also someone who knew her place in the White House. When Joanna asked Kathy if she ever witnessed any global crises, her response was a modest one. “If my sandwiches came back from the Oval Office uneaten, I knew there was a world crisis,” she said.

She brought mementos of her time in the White House back with her to Listowel when she retired. They remain there to this day.

One of the most prized is the Christmas present Kathy received from President Hoover in 1930. The White House was being renovated at the time and wooden beams were replaced by steel. The President used some of the beams to make pen holders for his staff. Patrick Buckley now has this penholder on his wall along with the envelope and note that came with it.

“All the way from the White House to William Street,” he laughs.

Vincent Carmody has recipe books and menu cards that Kathy collected on her travels. “She was always looking for new dishes to serve the Presidents,” he says.

There are also letters Kathy received from Herbert Hoover’s wife Lou Henry, as well as the key which President Coolidge received when he was given the freedom of Fort Worth in Texas. He gave this to Kathy as a gift when he returned from that city.

Kathy broke her hip in 1969 and spent some time in a nursing home in Listowel before she died. Both Vincent and Patrick spent many evenings with her there.

“Her mind would often travel back to earlier days as she lay in that darkened room,” remembers Vincent. “She would ask me to light a fire in the Oval Office or collect a tray from the Rose Garden. She never forgot the White House to her dying day.”

And her nephew will never forget his earliest memory of his aunt. “Kathy placed a huge bowl of homemade custard, rich with cream, in front of me. I was used to Bird’s Custard (a readymade brand) at the time and I told her I didn’t like hers. She threw me a look and said, ‘If it was good enough for three American presidents, it’s good enough for you.’”

The people of Listowel have only just begun to remember Kathy Buckley. A plaque was erected in her honor outside her home this June, celebrating the life of a cook whose culinary talent took her from humble beginnings in north Kerry to the bustling kitchens of the American White House. ♦

Sharon Ní Chonchúir lives and works in West Kerry, Ireland, and much of her writing is concerned with the changing face of modern Irish culture. She writes in this issue on Katie, a woman from Kerry who was the first Irish-born White House Chef.

By Carl Sferrazza Anthony There’s as much of the old sod in the White House as there is on its south...

Ireland’s Role in Global Climate Change. ℘℘℘ Welcome to the Emerald Isle. A country so verdant that Johnny Cash...

“Forty-five years ago, while the world watched as one, the United States of America set foot on the moon. It was a...

The White House announced in June that the long-vacant post of ambassador to Ireland has been filled by Kevin...