Last Word: The State of Play

Portmarnock Golf Club, one of the most prestigious clubs in Ireland, may soon open its doors to women.

Why women are still fighting male chauvinism on the greens of Ireland.

Ireland is now a rainbow nation. With the passing of the referendum on same-sex marriage in May, all romantic relationships gained equality in the eyes of the law.

But does this equality extend elsewhere? It may seem like a trivial question, but does it extend to golf courses? Is everyone afforded equal rights when they tee off in Ireland?

Golf clubs were once the sole preserve of a certain class of men. Membership was restricted to gentlemen only, and those gentlemen socialized and conducted informal yet influential conversations on the golf course and in the clubhouse.

Irish women have struggled to gain access to these clubs. For many years, they were only allowed to play on specified days of the week, usually weekdays when demand was low, and were often forbidden from certain areas such as the clubhouse and bar.

They’ve made more progress in recent years. Last September, the Royal and Ancient Golf Club in Saint Andrews, Scotland voted to admit women members for the first time in its 260-year history.

“This club isn’t Irish,” says Sarah Crowe, public relations officer with the Irish Ladies Golf Union (ILGU). “But as the home of golf, it has a huge impact on the progression of the game in terms of equality and recognition.”

Here in Ireland, the chief executive of the ILGU, Sinéad Heraty, recently delivered workshops to lady captains and vice-captains. She was told that equality in golf clubs was still a pressing concern. 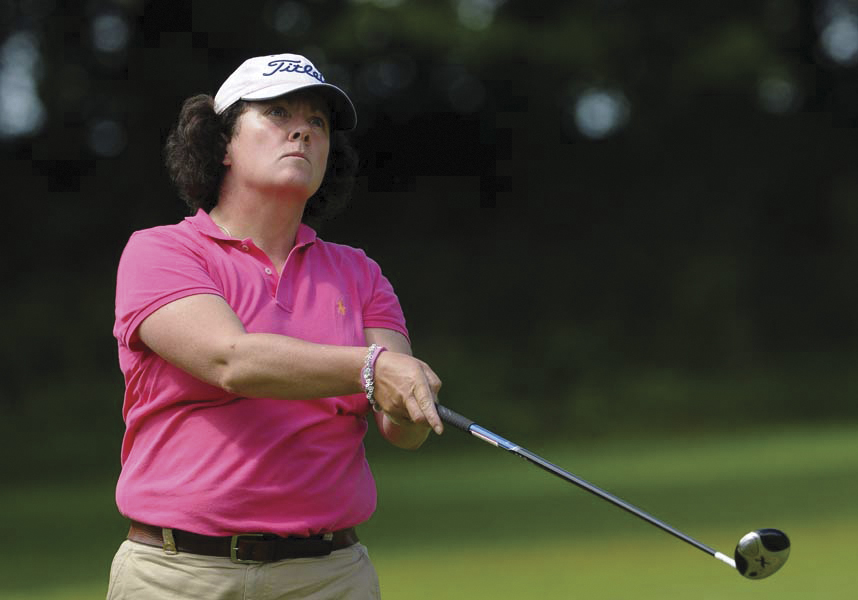 “In 2000, the Equal Status Act instigated change in the Republic,” says Sinéad. “Most clubs have since moved in the direction of equality. But some, especially in Northern Ireland where the legislation is different, have retained the traditional golf structure where men are members and women are associate members. Women pay a lower subscription for fewer playing rights and no decision making power in the club. There’s still a long way to go.”

Most of the Republic’s 430-odd golf clubs have opened access to women members since 2000. Most did so voluntarily but some had to be forced to do so. The Bray Golf Club in County Wicklow was one.

In 2002, the club was accused of putting an elaborate set of procedures in place for women who wanted to become members. They claimed the €5,000 fee for transferring membership from associated member to full member was ‘exorbitant.’ They also alleged they were allocated substantially less playing time than men and were often excluded from playing on weekends.

The situation was only resolved when legal action was threatened, but as a result, women are finally welcome as full members of the club today.

“We advertised for women members in Image magazine and Social and Personal magazine this year,” says Jean Courtney, Head of Operations and Membership at Bray Golf Club. “We are delighted to offer full membership to women golfers, with the same criteria as for men golfers.”

The club even makes extra efforts to attract women with its “Get into Golf Academy for Women.” “We run this on an annual basis and it’s resulted in a number of beginner members joining the club,” says Jean. “It’s our hope that as they progress, they will become full members with the same entitlements as the men.”

Two of Ireland’s most prestigious clubs, Portmarnock Golf Club and the Royal Dublin Golf Club, have yet to progress to the same extent. They are the only clubs in Ireland to still adhere to a male-only membership policy.

There have been legal challenges. In 2004, District Court Judge Mary Collins ruled that Portmarnock discriminated against females by not allowing them to join. She held that private golf clubs were not allowed to bar women.

This ruling was overturned in 2005. The High Court found that Portmarnock Golf Club was formed for the needs of men and should therefore be allowed to continue to cater to men only.

At the time, Niall Crowley, Chief Executive of the Equality Authority, was dismayed by the judgement. “This judgement maintains the unsatisfactory status quo that a significant institution in our society can continue to exclude women,” he said.

Currently, women can play in Portmarnock if they pay green fees as a visitor, if they are wives of members, or if they play with a member. They cannot qualify as members in their own right.

There was some controversy in 1990 when Mary Robinson became Ireland’s first female President. The assumption at that time was that Irish Presidents were automatically given honorary membership of Portmarnock Golf Club. What would happen now that Ireland had a woman President and the club didn’t allow for women members?

The club sidestepped the issue. They maintained that Patrick Hillery (the Irish President prior to Robinson) had been given honorary membership “because of his active involvement in the game and existing membership of several clubs.” If President Robinson were to be so honored, she would first have to become an ordinary member of the club, which was impossible because the rules restricted membership to “gentlemen properly elected.”

This past May, Portmarnock took a tentative step towards equality when it embarked on a consultative process to consider admitting female members. Some think they are doing this for reasons of expediency.

Since its foundation in 1894, Portmarnock has been considered the spiritual home of golf in Ireland. It hosted the inaugural Irish Open in 1927 and it’s hosted the event 19 times since then.

However, it hasn’t done so since 2003, when the National Women’s Council threatened to boycott the event because of the club’s membership policy. In 2009, the Supreme Court ruled that Portmarnock Golf Club could continue to exclude women as full members because it is exempted under equal status legislation. However, some club officials now think this policy is holding Portmarnock back.

“Our current gender policy may impair our ability to contribute to the development and promotion of golf in Ireland,” said Club Captain John Conway in a letter sent out to members in May. “This is a proud tradition which is important to us. We’re examining this issue and its implications by taking soundings from members on attitudes to admitting female members.”

This process is underway but there is no indication when a decision will be reached. “We will take as long as we need,” says Conway.

The gender divide in golfing is particularly pronounced in Leinster. The west of Ireland appears to be more emancipated in that its golf clubs allow women as full members. Even Castlerea Golf Club in Roscommon, the only constituency in Ireland to reject the same-sex marriage referendum, allows for women as equal members.

Newer clubs don’t prioritize men over women either. Clubs built in recent decades that have complied with equality legislation include prestigious names such as Mount Juliet, the K Club, and the Glasson Golf and Country Club.

Where does the old guard’s reluctance to admit women stem from? Some men see the golf course as the final frontier of male-only recreation. Some women see their exclusion as a symptom of the worst kind of outdated chauvinism.

Others see gender politics at work. We’ve heard from various enquiries into the Irish economic collapse that former Taoiseach Brian Cowen played regular games of golf with heads of Irish banking prior to the crisis. This is an example – if one were needed – of how important conversations are had by influential people on the golf course. Maintaining a men-only policy could be seen as serving men’s interests in this regard and mitigating against women’s.

Whatever the reason for women’s inferior position on some golf courses, equality does seem to be on its way. In the U.K., clubs including Royal Troon, Muirfield, and Royal Saint George’s have begun to reconsider their men-only policies since the Royal and Ancient Golf Club ended its ban on women last year. In the U.S., Augusta allowed women to join in 2012.

Now that Portmarnock may be following suit, full equality for Irish women golfers should only be a matter of time. As Sinéad Heraty says, “There are still a few clubs in Ireland that do not allow female members, but women’s golf seems to be moving in the right direction and we are working towards equality in all clubs in the future.” ♦