Becky Lynch is becoming one of the major figures in what appears to be a revolution in women’s professional sports – pro wrestling. Enthusiastic, opinionated, and, yes, mouthy, Lynch spoke with Kara Rota about her rise in the unique, theatrical, and athletically demanding combat sport.

Becky Lynch failed P.E. in school. It’s almost impossible to imagine now, watching her at the top of her game as she flies off the ropes of the ring and delivers her signature finisher, an armbar called the Dis-arm-Her. In July, she debuted on WWE Monday Night Raw, pro wrestling’s flagship show, and quickly began climbing the ranks of the roster to audience enthusiasm.

There were no professional wrestling schools in Ireland when Lynch was born Rebecca Quin in Dublin in 1987. “Me and my brother would watch it [on TV] all the time and I loved it. But if you wanted to be a wrestler, you’d have to go off to England or America to train,” she said when we spoke on the phone in July.

That changed in 2002, when current NXT superstar Finn Bálor (then wrestling as Fergal “Prince” Devitt) opened a school in Bray, County Wicklow.

“It was about an hour and a half away from me. And it didn’t even have a ring at the time. We wrestled for three months on just six blue mats on the floor in this tiny little hall at Saint Andrew’s national school,” Lynch recalls.

“We’d go down there every Sunday and that’s how we learned, on the mats. We’d go across to England and do these summer camps where you’d train eight or nine hours a day in a gym. You’d sleep on the mats in the ring or under the ring.”

Using the name Rebecca Knox, Lynch made her professional wrestling debut at the end of 2002, teaming up with her brother in mixed tag team matches. But she still wasn’t thinking of it as a career. 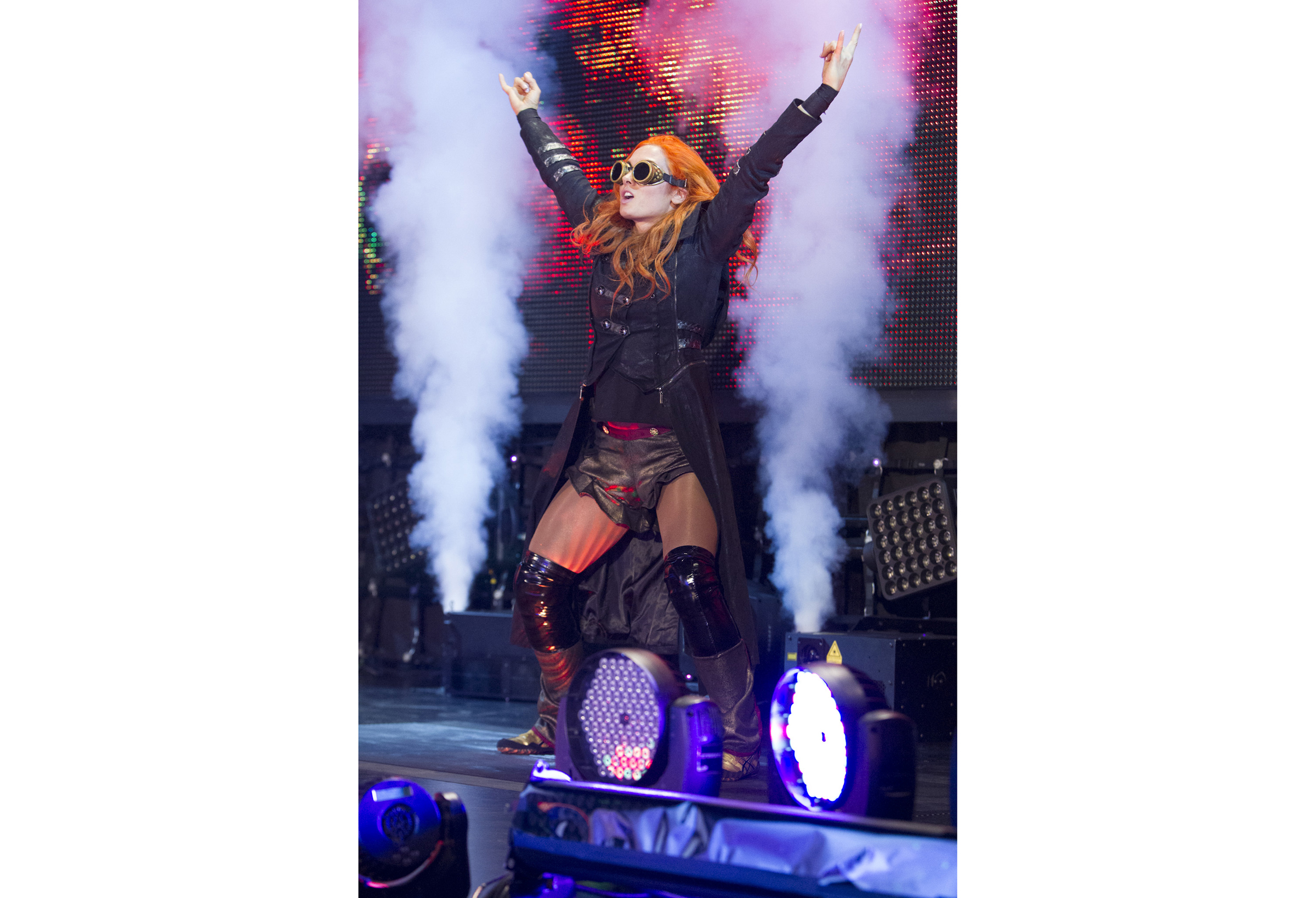 Becky Lynch entering the stage at a WWE NXT show this year.

She thought she’d try her hand at acting, then seriously considered a career as a lawyer. “That way I’d get to argue with people. I’d get to talk! I liked being in front of people and performing in any aspect, so being a lawyer seemed like a good way to go because I was a good little debater and talker and I was mouthy.”

After high school, Lynch went to University College Dublin where she studied history, politics, and philosophy, but she continued to wrestle and one day she realized she wanted to pursue wrestling as a career.

“I had a match in Kildare, and I remember coming home afterwards and just sitting down and turning to my brother (who has wrestled as Gonzo de Mondo) and saying, this is what I have to do with my life. This is all I want to do with the rest of my life.

“I told my mom that I was going to Canada just for the summer and that I’d get back to college the next year and do sports and exercise science, which maybe I kind of had as a fall-back plan, but I didn’t really want that.”

At just 18, not knowing anyone in Canada but having it in her mind that there was more wrestling going on over there and that she would have more opportunities, “I just headed over, and was really lucky.” Her second day after arriving, Lynch got in touch with Scotty Mac, a wrestler she’d met once before in Ireland, and ended up trying out for the company he was involved in, Extreme Canadian Championship Wrestling.

“I remember it being really scary, but not in a paralyzing way. It was a good fear. One that motivated me more than it held me back. It was, ‘Okay, I’m scared. I’m 18 and I don’t know anybody, but this is what’s right.’ 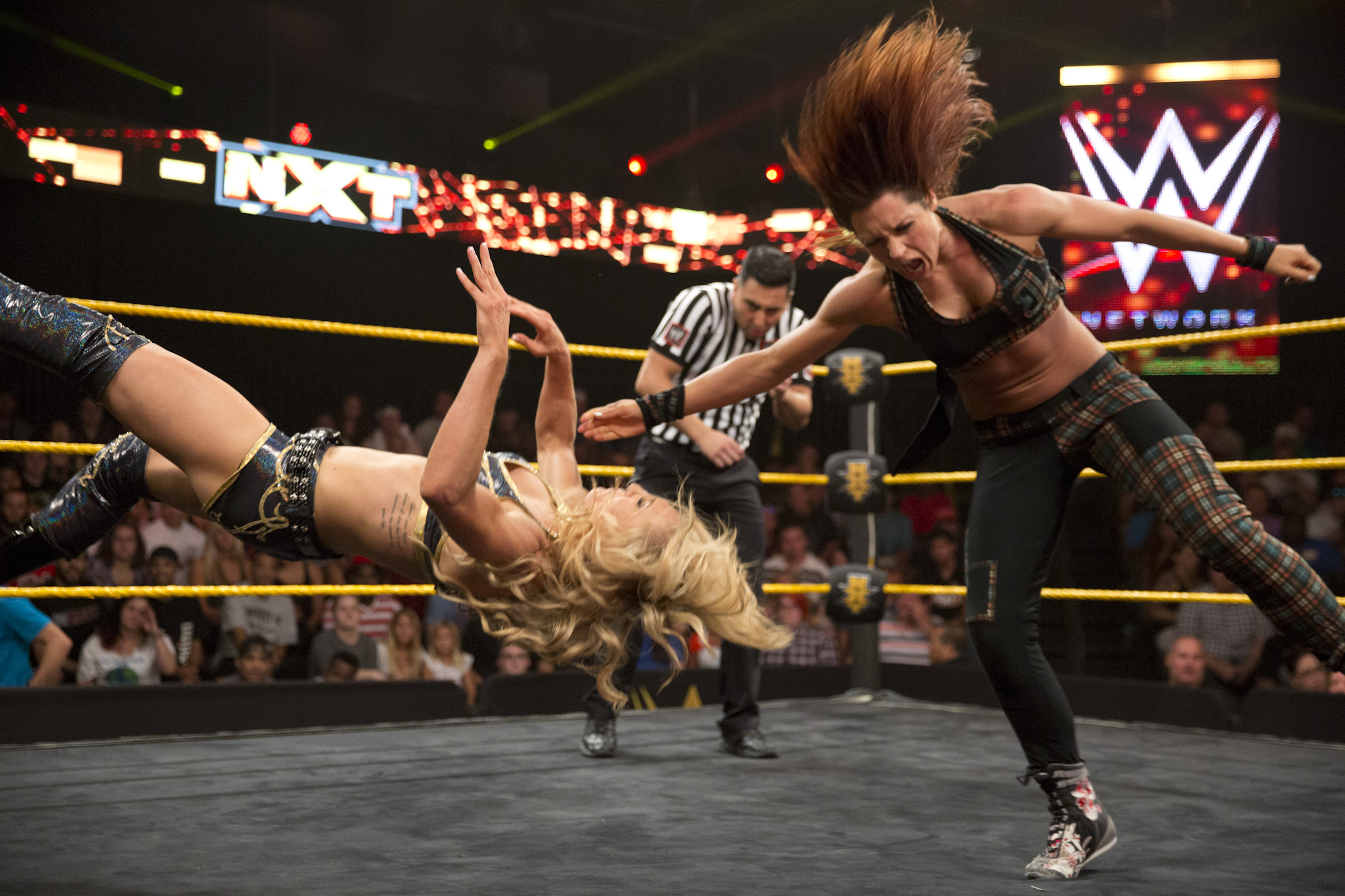 “When things are scary or there’s a struggle, I always think, ‘how is this going to sound in my biography?’ Sometimes I would just be living on protein shakes or the cheapest food that I could afford, because I didn’t have a lot of money. I would be sleeping on the floors of friends apartments, and all the time I was thinking, ‘this is what makes for a good memoir.’

“I’d read Stone Cold’s biography about how he lived on, like, raw potatoes, and I thought, this is all part of it. This is what wrestlers do and this is what I’m going to do.

“I was lucky to find a school and find a company that really took me under its wing and supported me. I was lucky. It all worked out really well in the end.”

Of course, it was more than luck that propelled Lynch’s success in Super Girls Wrestling, an offshoot of Extreme Canadian Championship Wrestling.

After making a name for herself in Canada, Lynch began to wrestle in various promotions as Rebecca Knox, traveling for matches in America and Japan.

Both in the ring and on the microphone, Lynch has always set herself apart as a performer. She puts on a show, and jumps into full-out brawls with an enthusiasm and skill that’s unique in all of wrestling, not only the Divas division.

“I think when you’ve got a passion for something, it comes out of you and people can feel it. Then your mind is so geared towards that, and how you can improve on it, and you’re so excited about performing that it comes together….

“Everybody has that thing about them that makes them special, and sometimes we try to dull it down or we don’t always want to expose it, and maybe we’ve been taught that way or whatever. It’s just a matter of letting it out and letting it go and letting people in on it.”

In 2006, Lynch sustained a head injury during a match in Germany and was diagnosed with possible damage to her eighth cranial nerve. She left the ring for years, first as a result of the injury and then to explore other possible career paths. She went back to school and worked as an actress, a stuntwoman, a flight attendant, a personal trainer, and even a wrestling manager. 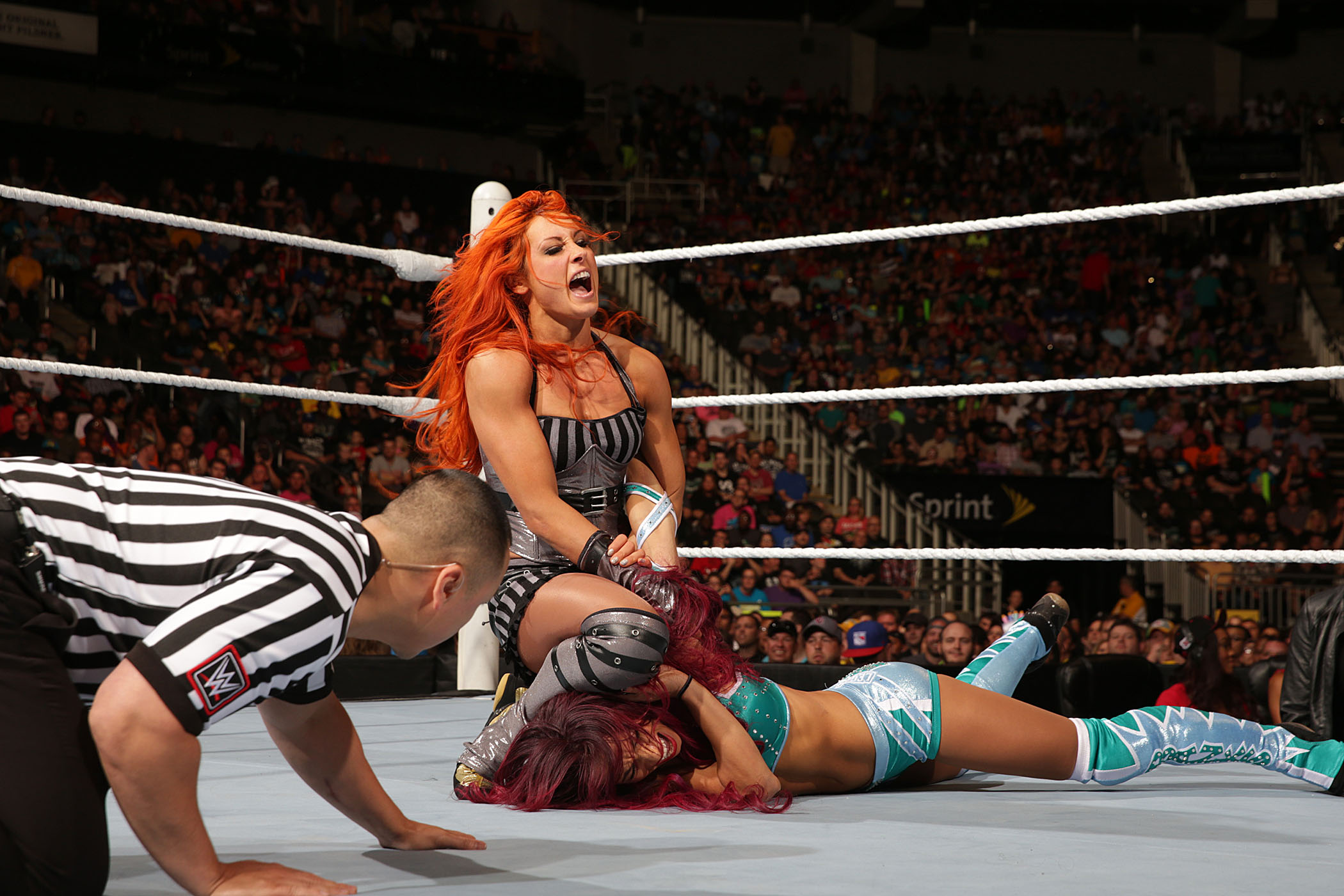 Lynch with Sasha Banks at WWE Smackdown in August.

Then in 2013, she signed with WWE. And now, she has no intention of leaving. “I want to be in this business my entire life. I stepped away from it for seven years, long enough to know that there is nothing else I want to do.”

And she’s not the only Irish fighter in the ring these days. Lynch is enthusiastic in singing the praises of her Irish cohorts. “We have that thing about us anyway that we’re the Fighting Irish, and now with all the attention that we’re getting, it’s just unbelievable.”

Lynch sounds like any other fan while listing athletes that share her Irish heritage. “First you’ve got Sheamus blazing the trail [in WWE], and then you’ve got [UFC Featherweight champion] Conor McGregor, who is just unbelievable; what he is doing for mixed martial arts is just amazing. He’s entertaining, and he backs it up with real talent, he always delivers. Pound for pound, he’s just one of the best fighters going at the moment. And then you’ve got [NXT champion] Finn Bálor, who’s just incredible. I consider him to be probably the best sports entertainer in the world right now. And then you’ve got [boxing champion] Katie Taylor. I’m so proud to be one of the people that’s in that category, doing Ireland proud, putting us more on the map. Bringing home some belts, and hopefully, winning some titles and championships.”

We shouldn’t have to hope too hard. Lynch’s skills are notable, and her physical training is relentless. She trains at the WWE Performance Center in Orlando, spending three hours daily in the ring plus plenty of hours of weight training, cardio, and yoga. “Just something to center myself and keep moving. I feel like yoga’s helped me so much just to stay injury-free and relaxed and calm.

“To be honest with you, I could not tell you the last time I took a day off from the gym, which is probably not the greatest! I just love it. It helps me keep my head in the game and know that I’m working towards something that I love more than anything.”

Professional wrestling, while too often dismissed as a “fake sport” or for kids, is actually hugely popular, and more mainstream than many believe. Over five and a half million people watched the episode of Monday Night Raw that aired the night after Wrestlemania, referred to as “the Super Bowl of wrestling.”

While female wrestlers such as The Fabulous Moolah, Mildred Burke, and Mae Young were instrumental in increasing the popularity of pro wrestling in the early and mid-20th century, more recent decades have relegated most women in wrestling to ringside sidekicks or cheerleaders, catfighting it out in pudding or mud, and hardly respected for their athletic accomplishments. Now, as women dominate in soccer, tennis, and combat sports, they’re climbing the ranks in pro wrestling as well.

“For me right now, what is going on is what I’ve always dreamed of and what I’ve always wanted, and it’s that [female wrestlers] have this credibility. Before this, I think women’s wrestling wasn’t always respected. It was more of an afterthought.” 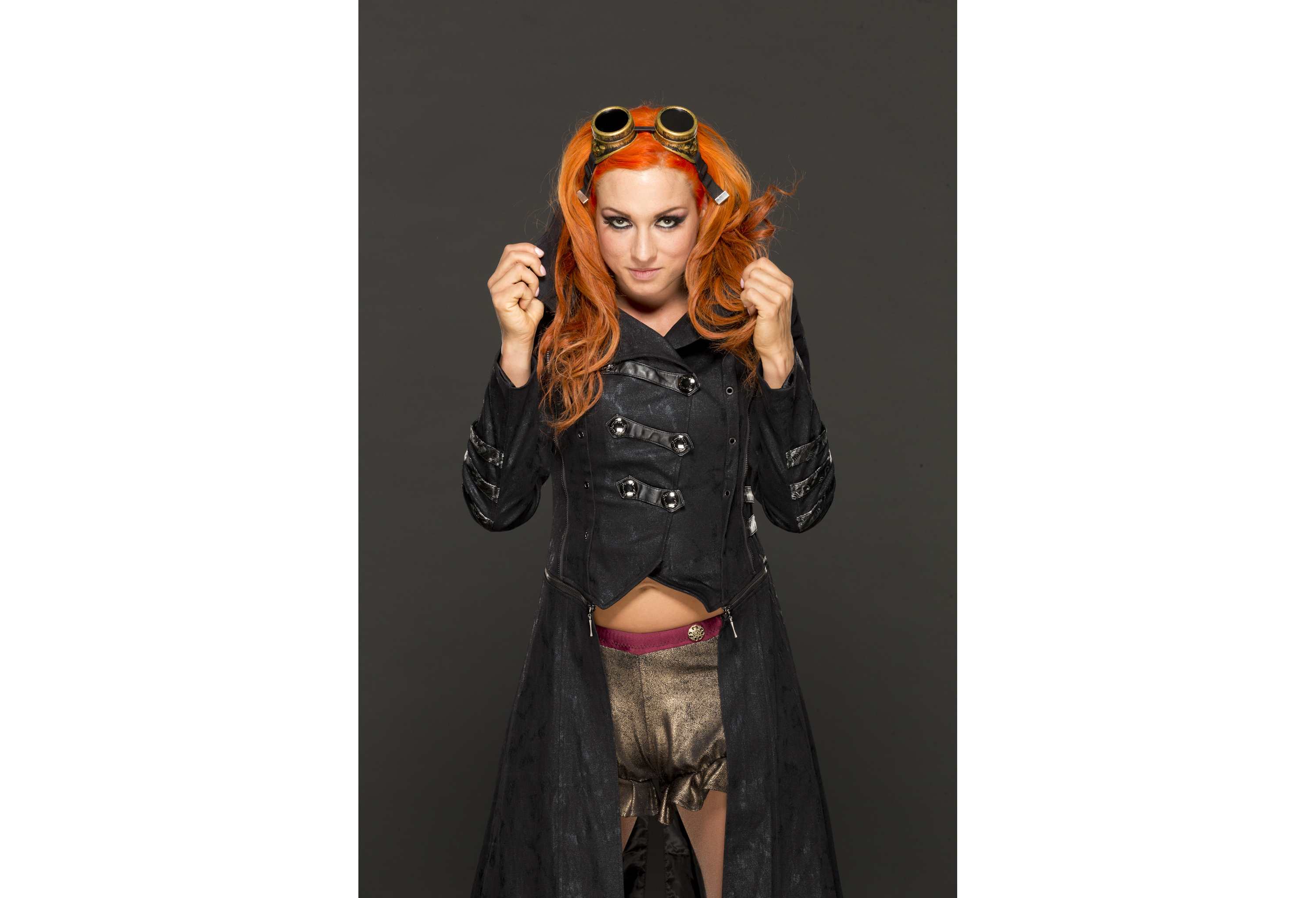 Regarded by some fans as time for a beer or a bathroom break, women’s matches now can be the highlight of a show.

“We want it where it’s not just, ‘Oh it’s a girl’s match, let me go put the kettle on and have a cup of tea,’ or whatever. It’s like, ‘Oh, no, the girls are on. I need to see this. I can’t miss it!’ We want that for women’s wrestling. For the whole state of the division. For women in general, you know what I mean? It should never be an afterthought. It should always be that we are equally as credible as the guys, if not more so.”

Lynch is not only helping to garner the respect of the fans, she’s helping to carve out a larger place for female talent in the annals of wrestling fame.

“When I walk down to the Performance Center, there’s a hallway, and there’s a display of all the pay-per-view posters. It’s all the headliners, all the moneymakers, and they’re all men. All of them. Every single one of them. I walk down and every single time I just kind of shake my head a little bit.

Because I know in five years, definitely in ten years, but no, five years, even three years, I know I’m going to be walking down and I’m going to see female wrestlers like Charlotte Flair and Sasha Banks and Bayley, and maybe myself, there on those posters. That’s what it’s going to be, because that is the future.” ♦

Kara Rota is Director of Editorial & Partnerships for Cookstr.com at Macmillan Publishers, where she also acquires and edits books. She previously wrote about feminism and professional wrestling for xoJane, and is on Twitter @karalearota.