Pictured at the presentation of the Keough-Naughton Trophy at South Bend were: Neil and Fergal Naughton with Mickie Keough, the wife of the late Don Keough. See below for full-size.

A new trophy has been added to the roster of college football trophies, only this one is different from the bowl game and rivalry cup trophies most Americans are familiar with, because this one will only be awarded in Dublin.

The Keough-Naughton trophy bears the names of two powerhouses of Irish America – Donald Keough, former head of Coca-Cola and the first inductee into the Irish America Hall of Fame in 2010, and Martin Naughton, whose support fostered Irish studies programs in the U.S. It will be the perpetual prize for the annual Aer Lingus College Football, a regular-season game played by American college teams at Dublin’s Aviva Stadium each September. The inaugural trophy, made by Waterford Crystal, was unveiled in the U.S. at both Boston College and Georgia Tech’s respective games last weekend. Boston College and Georgia Tech will compete for the inaugural Keough-Naughton Trophy in next September’s Classic.

Appropriately, the Georgia Tech unveiling took place at the University of Notre Dame, where the Yellow Jackets were the visiting team in South Bend, Indiana last Saturday. Notre Dame’s Keough-Naughton Institute for Irish Studies was the first academic institution of its kind dedicated to the scholarly study of Irish language, literature, and history in the U.S., and both the Keough and Naughton families were on-hand to give the final seal of approval for the trophy. 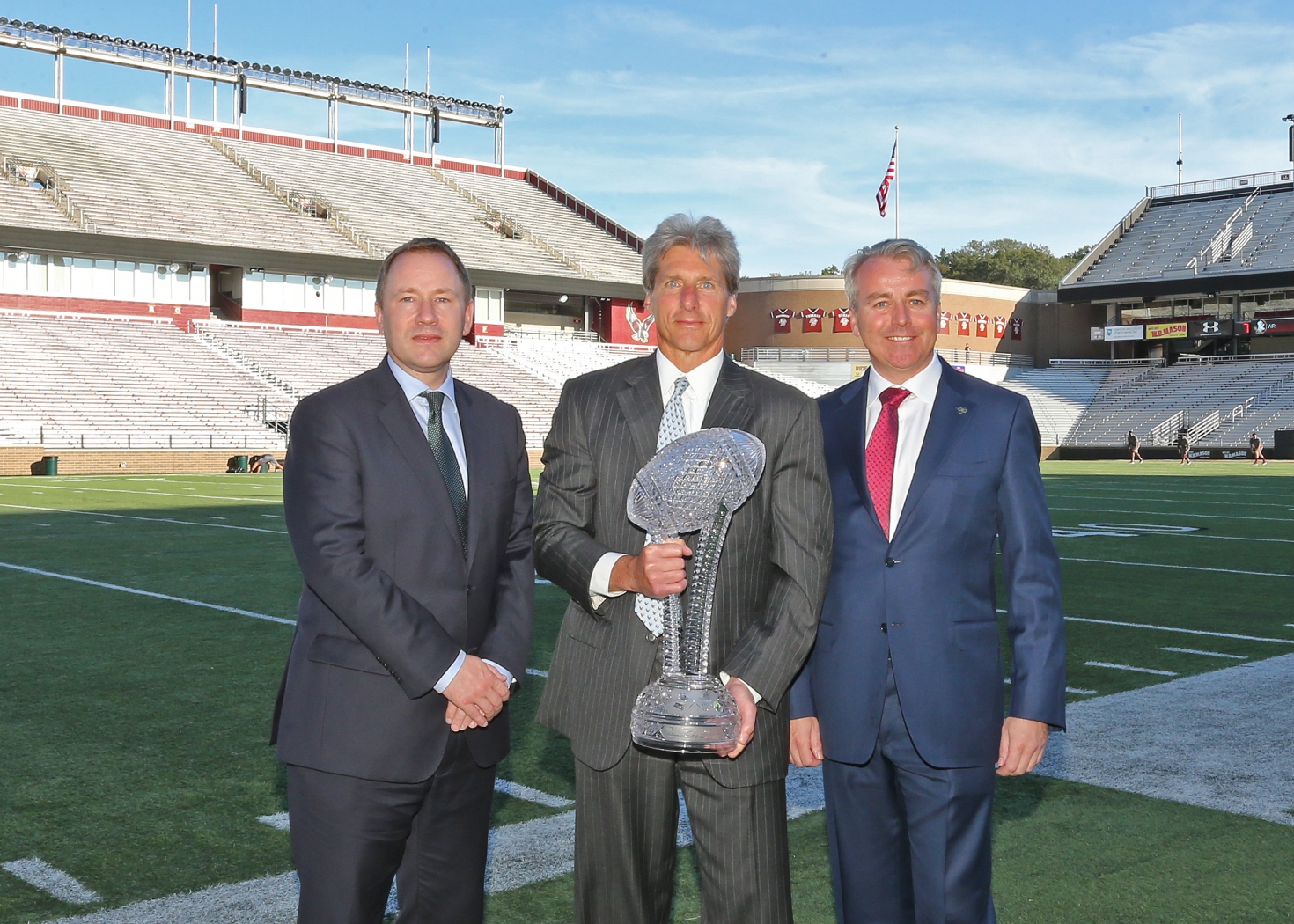 Neil Naughton, Chairman of the steering group created to maximise the business opportunity between Ireland and the United States around future College Football games in Dublin, was joined by Aer Lingus CEO Stephen Kavanagh and Boston College Athletic Director, Brad Bates at the unveiling ceremony in Boston College. Both Fergal and Neil Naughton then met with Mickie Keough, wife of the late Don Keough in South Bend after Georgia Tech had played Notre Dame.

“He was a dynamic presence in Irish-America, where he supported Irish business, education and culture in multiple ways. Don brought wise counsel, good humour, and vigour to strengthening the relationship between Ireland and America,” he said.

The Keough-Naughton trophy was designed by Matt Kehoe, head of Design at House of Waterford Crystal, where the trophy was hand-crafted at the company’s Waterford factory. Featuring a football mounted on three individual crystal pillars, Kehoe’s concept for the trophy was a ball in flight and the pillars represent the players’ arms catching the ball. 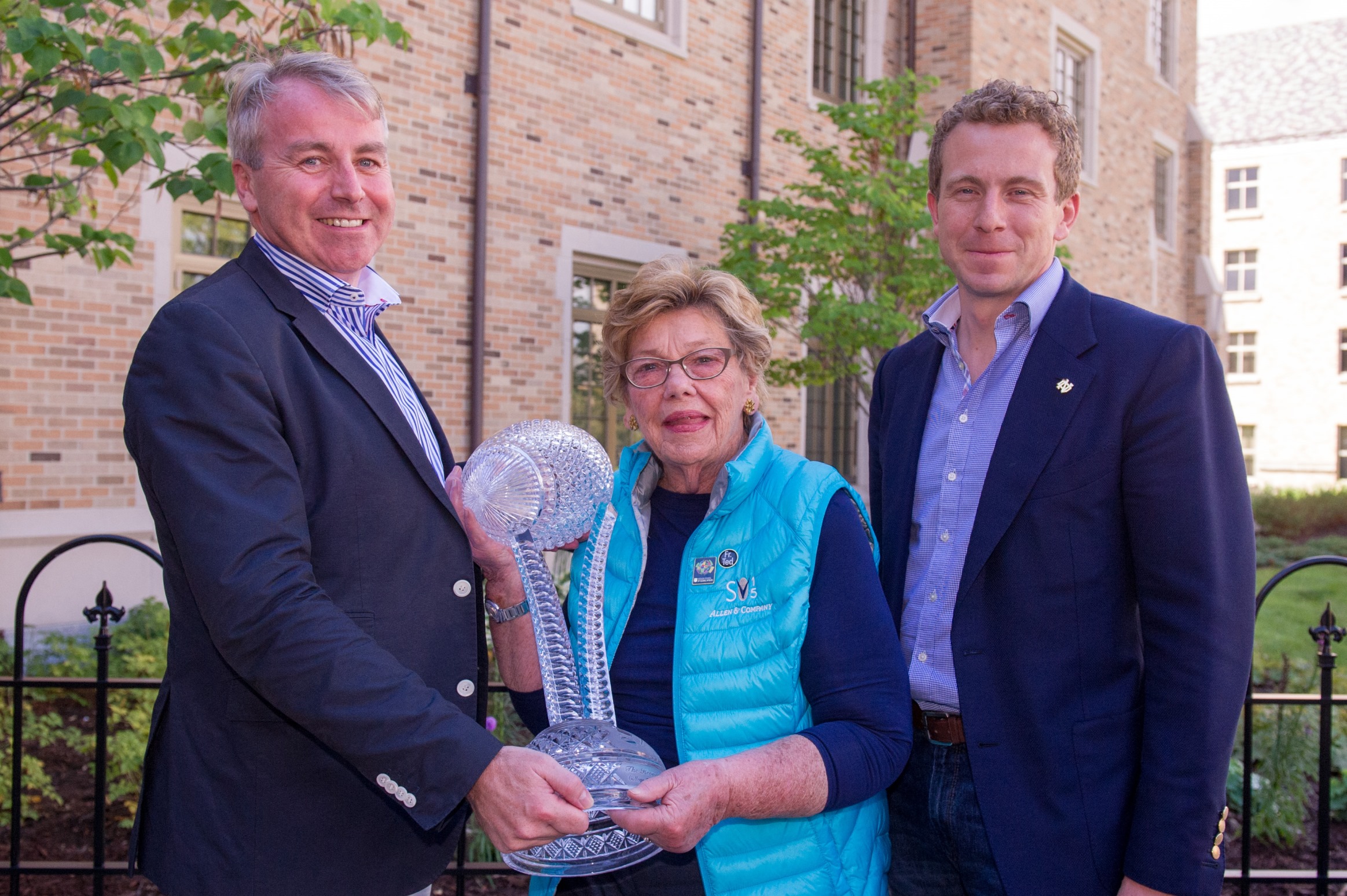 Pictured at the presentation of the Keough-Naughton Trophy at South Bend were: Neil and Fergal Naughton with Mickie Keough, the wife of the late Don Keough.

“One ambition that the families share is to bring major American College football games  to Dublin every two years, where elite universities will bring the spectacle and the drama of their sport to Irish turf. These games offer huge publicity potential, practical economic benefits, and a genuine expression of the close ties between our two countries,” Neil Naughton continued.

“We hope to add an exciting international chapter to the rich narrative of American College Football, which brings famous franchises like Boston College, Georgia Tech, Penn State, Notre Dame, and Navy to Dublin.” 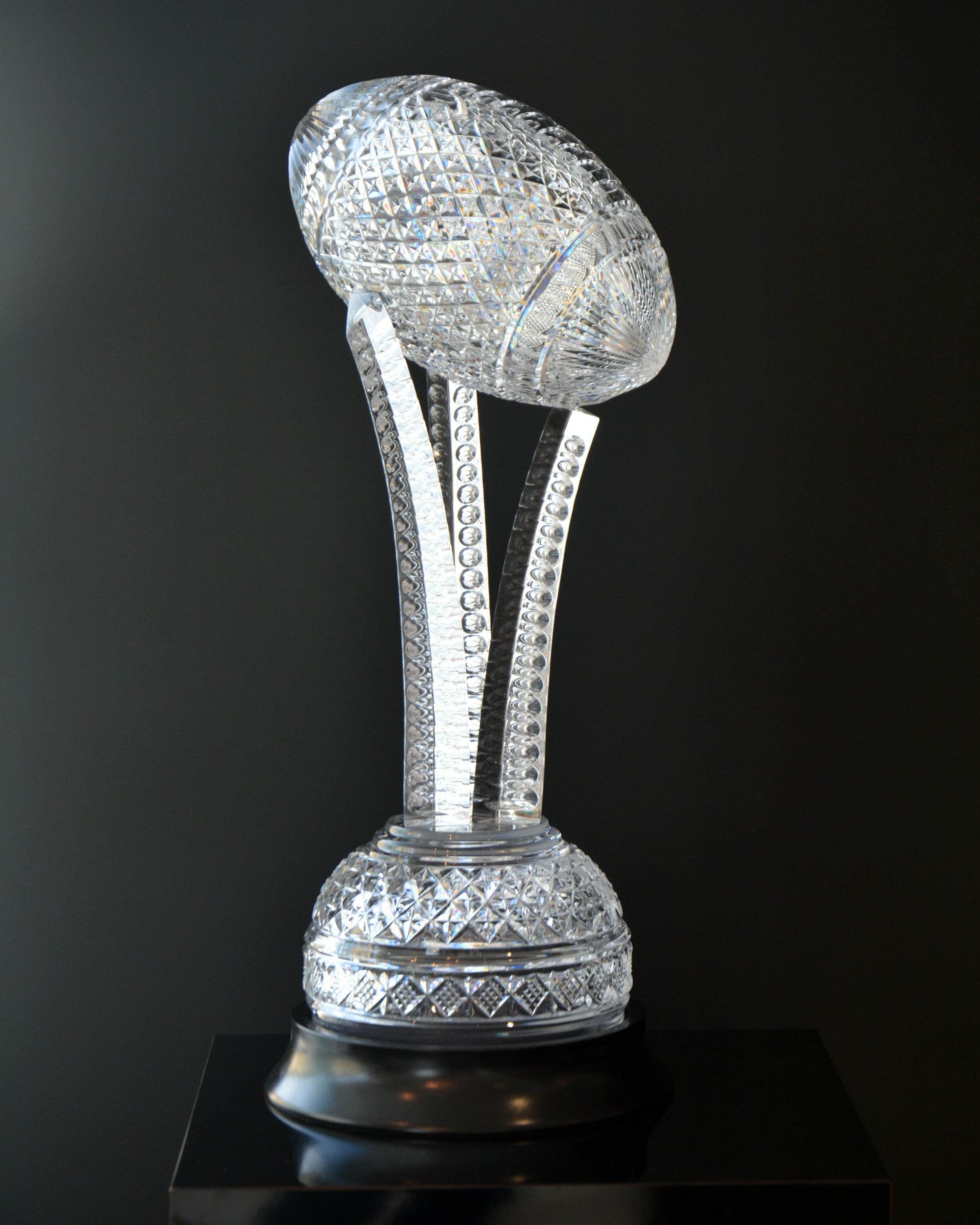 The trophy, as part of a tour of the U.S. will stay in Notre Dame until October 10th where it will be on display for Notre Dame Ireland Council Meeting before making its way to Atlanta, Georgia for a number of engagements in November, the highlight Georgia Tech v Virginia Tech on November 12th at the Bobby Dudd Stadium. ♦