The cottage featured in John Ford's "The Quiet Man" has been given protected status by the Irish State. (Photo courtesy of the author)

UPDATE: In the wake of Maureen O’Hara’s death earlier this month, a new petition has been started by fans hoping to see the Co. Galway cottage where The Quiet Man, one of her best-known films, was shot faithfully restored in her memory.

The petition was started by Patrick McCormack, founder of the White O’Morn Foundation, and has amassed more than 1,600 signatures in just a few days.

“If you think about Duke, John Ford and all the people who worked on the picture it is sad to see it in a shambles.  How can anyone say anything but wonderful things about it? – and see to it that it is fixed up for them and in their memory and for Ireland?” he says.

There was a huge sigh of relief and joy from thousands of fans when they learned that the iconic thatched cottage featured in “The Quiet Man” movie has been officially placed under state protection.

On Monday, July 20th, Galway County Council voted unanimously to add the 19th Century cottage (known as ‘White O’Morn’ in ‘The Quiet Man’ movie) to its list of protected structures. The motion was raised by Councillor Seán Ó Tuairisg and seconded by Councillor Tom Healy.  Cllr. Healy, said: “This was the final step in the process to add it to the list of protected structures and it means the cottage now has legal protection.”

The cottage, which is located in Maam Valley, Connemara, was an actual family home dating back to the pre-1820s.  The Joyce family was still living in the cottage at the time the exterior shots for the movie were being made.  Hollywood Director John Ford chose this location as the perfect Irish cottage for the home of main characters, Sean and Mary Kate Thornton (John Wayne and Maureen O’Hara in real life).  Although it was painted and landscaped for the film, the years (64 to be exact) have taken their toll and it now lies in ruin.  Everyone wanted to see a rebuilding of the iconic cottage, but realized it needed professional and historic guidance to guarantee an authentic restoration.  The integrity of its status in Cinema and Ireland itself had to be protected.  As Maureen O’Hara told the press from the Connacht Tribute when she arrived in Cong to make the film, “ As far as I am concerned, Ireland is the star of this picture.”  And so it was….and is – decades later. 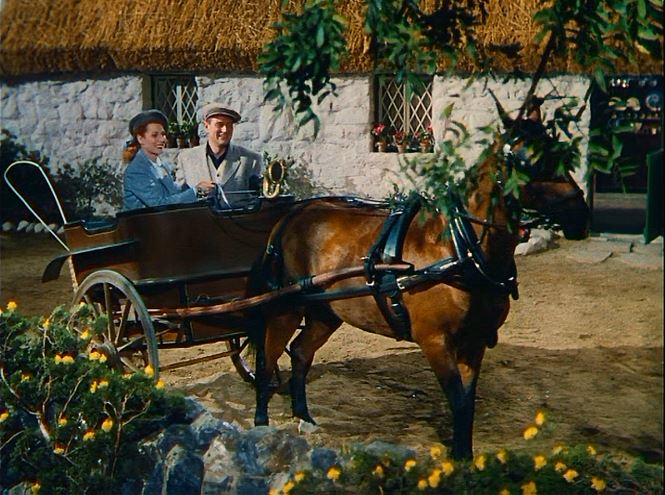 John Wayne and Maureen O’Hara in front of the cottage in “The Quiet Man.”

The campaign to secure the future of the property and restore it to its former beauty has the support of A-list celebrities including Liam Neeson, Michael Flatley, and Maureen O’Hara herself – all of whom have posted comment/statements of support over on the White O’Morn Cottage Facebook page:  www.facebook.com/quietmancottage

In a recent conversation I had with Maureen O’Hara, she stated “If you think about Duke, John Ford and all the people who worked on the picture, it is sad to see the cottage in shambles. How can anyone say anything but wonderful things about it, and see to it that it is properly restored for them and in their memory – and for Ireland.”

In a personal statement of support Liam Neeson said: “This little piece of movie architecture would then shine like a beacon for many generations to come, delighting thousands of tourists with its simple magic and standing as a monument to the great Irish grit, perseverance and welcoming charm that we are known for worldwide.”

And Michael Flatley stated: “I am delighted to see your efforts to protect White O’Morn Cottage, a unique piece of Irish film history.”

The approach to the cottage as seen in “The Quiet Man.”

Belfastman Paddy McCormick, who initiated the current campaign and who has been advocating for substantive action on the cottage for 17 years said,  “Galway County Council has given Sean and Mary Kate’s ‘wee humble cottage’ a fighting chance – and each and every one of those petition signatures has played a vital role in moving things forward”

The cottage’s current owner, California-based Greg Ebbitt, has expressed concerns about the move to protect his property from further ruin, recently saying that he feared the cottage might never be restored once it has protected structure status.  Ebbitt, who has owned the property since 1985, is currently facing the prospect of losing the house and its surrounding lands as he fights an application from a neighboring farmer and businessman for adverse possession.

White O’Morn cottage then and now.

McCormick further explained, “Our original application to Galway County Council was prepared in collaboration with a Grade 1 RIAI Conservation Architect who specializes in heritage conservation projects throughout Ireland. Being on the Record of Protected Structures will actually be a great benefit in helping achieve any future restoration of this iconic cottage and will not prove to be a hindrance, as some people contend. Supporters of this protected status have already reviewed restoration requirements with a specialist heritage architect to guarantee an emphasis on authenticity.

The magic of “The Quiet Man” has been as enduring as the footbridge that takes you across the stream to that ‘wee, humble cottage’ of Mary Kate and Sean Thornton.  Though it is currently in ruin there is always hope that like John Ford’s dream of making that film we can once again say, “It’s the Luck of the Irish! ♦

Stay updated on ‘The Quiet Man’ cottage on:

This article was originally published July 24, 2015.

Home to some of the most spectacular scenery in the world, County Galway also features and ancient city with ties...

The name O’Hara has held a distinguished place in Ireland for centuries. The current spelling is an anglicized...

Maureen O’Hara has heard a banshee, played camogie, and more from a 1957 episode of “This Is Your...