Rowing Back to Life

Participating in the flower ceremony at the International Breast Cancer Dragon Boat Festival in Sarasota, Florida.

They come out of the drizzly mist of a very early Saturday morning headed for Flushing Bay, Queens, carrying paddles and life jackets, dressed for action. The Empire Dragon Boat Team – 42 women ranging in age from their early 30s through 70s, who have battled cancer. Donna Wilson, a clinical nurse specialist and personal trainer with the Integrated Medicine Service of Memorial Sloan-Kettering, founded the team along with Jennifer Merendino in 2009 and acts as a captain. The Empire Dragons belong to the International Breast Cancer Paddle Commission, a group that represents thousands of women who have found in the ancient Chinese sport of Dragon Boat Racing a way to “survive and thrive beyond cancer.” As one woman said, “We leave behind the pain and craziness and go forward. After all, we’re in the same boat.”

Nearly 50 million people participate in Dragon Boat races annually. They paddle highly decorated boats with the dragon heads and tails that symbolize the most powerful of the Chinese deities in whose honor the first festival began over 2,500 years ago as a way to mark the summer solstice and make a ritual appeal for health and well-being.

“I love that our sport has such ancient roots,” team member Sheila Cox says as we watch the women arrive in the small park above Flushing Bay. Today’s an especially important practice. In a week the summer racing season opens with the Paddle for Pink Dragon Boat Festival at Mercer Lake in Princeton, N.J. and the team has high expectations. “We placed fourteenth out of 101 teams from all over the world in the International Breast Cancer Dragon Boat Festival in Sarasota, Florida. A good showing for our first international race,” Sheila says.

“There’s a great atmosphere at the competitions. All the teams set up tents, visit and picnic. Next week’s Festival is specifically for breast cancer survivors, but often we’re just part of the mix. The International Dragon Boat Festival in Dublin on September 12 and 13, 2015 will have a division for cancer survivors. I’ve met women on that team. One of them travels from Donegal to Dublin to practice. That’s dedication,” Sheila says.

Such a commitment is necessary because success depends on being one with your team, Sheila explains. “Even lining up with the other boats on the starting line is a challenge. As soon as we get in alignment with the other teams, the horn sounds and we paddle like crazy for two and a half minutes. It’s thrilling!” 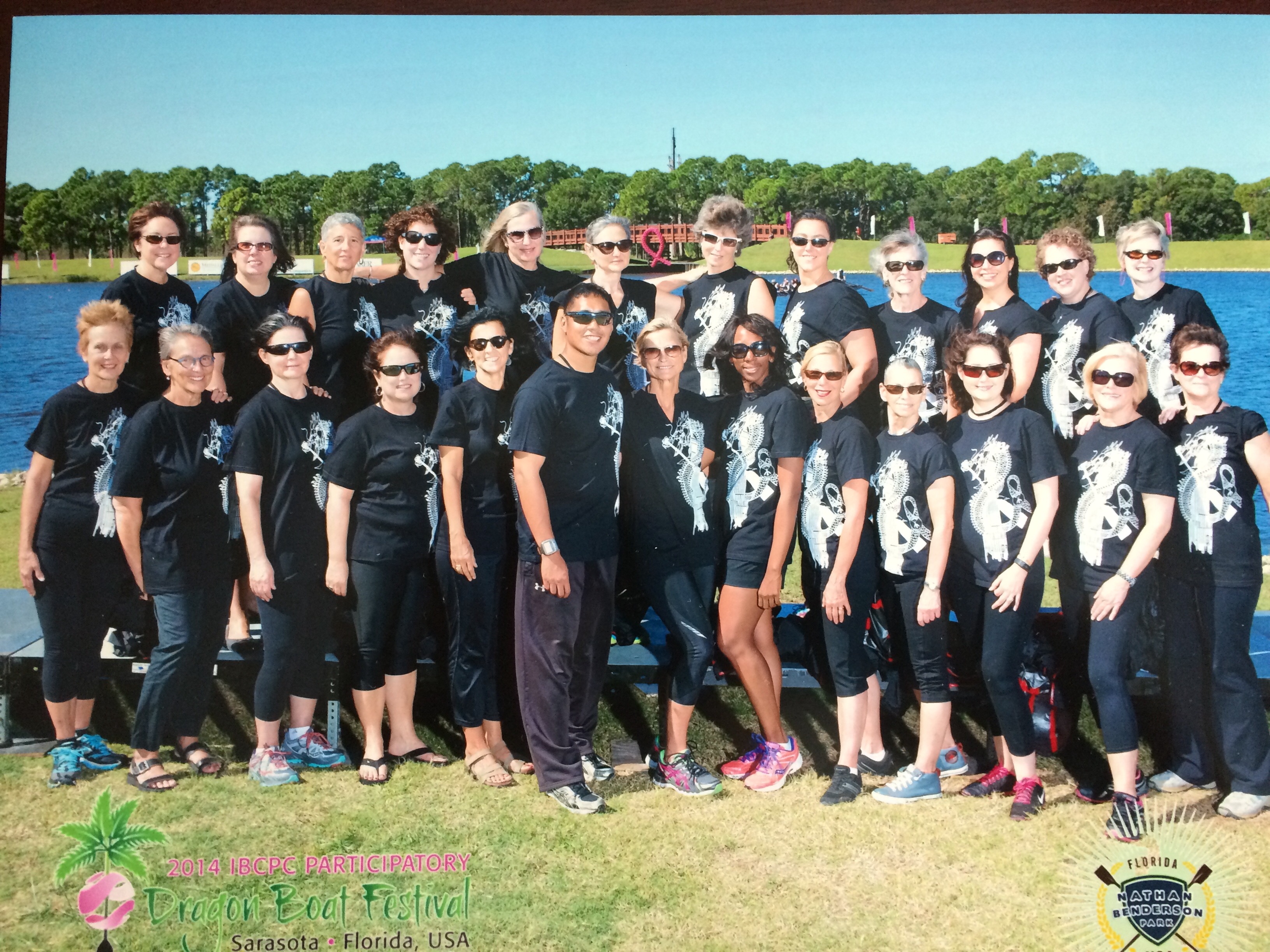 For Sheila being a member of the Dragon Boat team is an essential part of her recovery. “After my surgery, I wondered if I’d ever be able to exercise again. Then I did a work-out session with Donna. She’s a medical professional and knew what I could and couldn’t do. She made me feel I would come back, get strong. I could be myself again.”

Now Donna Wilson herself arrives. She moves with the confidence of a woman who takes joy in being fit. I watch her greet the team members, touching one on the shoulder, laughing with another.

Donna and I move a few steps away from the group as she tells me how her experience as a nurse and personal trainer led her to co-found the Dragon Boat team.

“As a nurse,” she says, “I saw that cancer can take a patient to a bad place. It’s not only the physical disease, but the emotional suffering, the depression and poor self image. Their bodies have changed and women are afraid that they will never be able to do what they’ve done before. There’s a loss of confidence. But I have come to believe exercise and working out offers a path to physical and mental recovery. I am convinced that women who battle cancer can become strong and fit.”

All around us women are running or walking warm-up miles. “There’s no judgment, each moves at her own pace,” Donna says.

“I had been teaching exercise and running workout boot camps at the Integrative Medicine Service at Memorial Sloan-Kettering when a fellow staff member, James Lozado, introduced me to Dragon Boat racing. What a great way to combine getting strong with a sport that could empower women, I thought. I wanted them to feel the rewards of being an athlete. Camaraderie. Achievement. Winning.”

“I was never good at sports in school,” Eileen tells me, “but when I got involved with the boat, I realized for the first time that I am competitive and I can be an athlete. I can do it. The first race I was very nervous but by the second I was exhilarated. Working out became a way to get stronger so I could hold up my teammates.”

Eileen remembers how difficult trying out for the team was for her. “I drove to Flushing Bay but I couldn’t get out of the car. I was undergoing chemo and I had lost my hair and my eyebrows. Somehow having the eyebrows go was the worst. I thought ‘I really look like a cancer patient now!’ I would have turned the car around and gone home, except Akila Simon, our coach, had sent me all these warm emails. I got out of the car and walked over to where the women stood in a row. The welcome they gave me was overwhelming. The bond was immediate.” 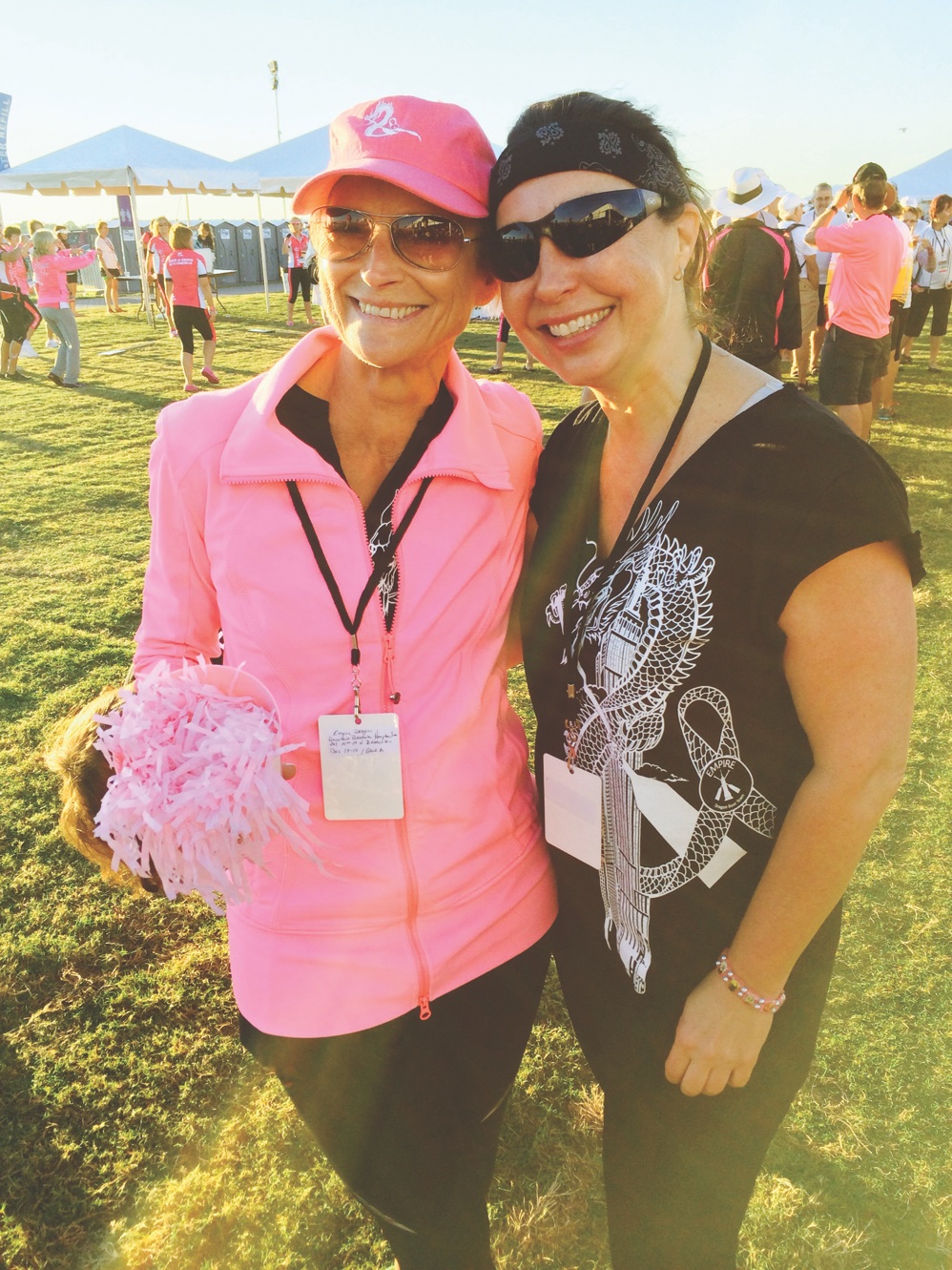 Now practice is beginning. Sheila tells me that both Akila Simon and James Lozado are certified to coach competitive and community Dragon Boat teams and have Level I and II Competitive Certifications recognized by The International Dragon Boat Federation. The coaches practice with the team every Saturday morning and Wednesday night on the water, with indoor sessions in the winter. Both coaches have demanding careers. James Lozado is a cancer research project coordinator at Memorial Sloan-Kettering and Akila Simon is an experienced accountant.

James is already in the boat teaching a new team member to paddle, showing her how to strike the water with strength. They go over the motion again and again, working quietly, but with great concentration.

Meanwhile, on the shore I expect to see Akila, a proficient athlete, lead the calisthenics. Instead the women themselves form a circle and take turns calling out the exercises. “Forty jumping jacks,” one says. Power radiates from these woman who are getting stronger for themselves, each other, and the boat.

Then I meet Deirdre Cosman, whose Roache and Cooney ancestors come from Clare and Longford. So many Irish women in the group, I think. Accessing some Celtic/Viking rowing gene? Channeling Queen Maeve? Deirdre does both, I’d say. For her, cancer meant losing an athleticism she had enjoyed her whole life.

“As a kid I played everything and excelled. I brought home trophies in basketball, volleyball and swimming. I continued to swim as an adult and was an avid yoga practitioner. I was 42 when I had a bilateral mastectomy. Four weeks after my surgery I went to a yoga class designed for breast cancer survivors, but the class seemed to offer only a crutch, not a chance to get strong again. A friend took me to Donna’s class. It was a real workout by a medical professional who understood my limitations but still challenged me. To be able to get back into shape, to be myself again physically has helped me psychologically. In the boat there is no coddling. Everyone is there because they want to be. And it is hard. Plus Flushing Bay itself is disgusting. The water is beyond polluted. Sometimes the bacteria level is so high that we can’t even practice. One splash can give you an infection.”

Faced with this dire ecological challenge, the Empire Dragons didn’t retreat. They mobilized to clean up the bay. Alex Herzan and Carmel Fromson spearhead The Green Team of Empire Dragons. For four years they have charted the live bacteria in Flushing Bay and worked to establish an oyster garden because one oyster can clean up to 50 gallons of water per day. The annual bay cleanup begun by co-founder Jennifer Merendino is named in her memory. Recently they joined with other Dragon Boat teams in a new group called the Guardians of the Bay.

Eileen Murphy at the Dragon Boat festival in Sarasota.

All the women are well aware of what they face.

“Even at the beginning I had this fear of a recurrence,” Eileen says. “It was paralyzing, but our Dragon Boat has been a light at the end of the tunnel. And guess what? My eyebrows grew back and so did my hair. In fact it came in curly and I always wanted curly hair!”

“Our motto sums it up,” Sheila adds. “Strength. Spirit. Success.”

Now Akila is calling for the women to line up and get in the boat.

“She’s got such a great voice,” Sheila says. “During the race Akila keeps a steady beat on the drum so we’ll stroke in time and together. But she also encourages us. ‘Lengthen. Deepen,’ she’ll say. ‘Power Ten,’ which means give her some Olympic worthy strokes, or ‘From the engine room’ calling for effort in the middle rows. And just when we feel we have no more to give, we hear Akila’s powerful voice. ‘You’ve got this,’ she tells us – and we do.”

I watch the women power their way across the bay. They’ve got it, no question. ♦

Author Mary Pat Kelly launched her latest his  torical fiction novel, Irish Above All, with a gathering at the Irish...