Mariann Williams and Michael Kelly on their wedding day at St. Patrick’s Cathedral’s Lady Chapel on June 5, 1943. (Photo courtesy of the author)

Mary Pat Kelly writes about her 94-year-old mother whose secret to youthful aging is keeping busy and staying interested in life.

“If at first you don’t succeed, do it the way your mother told you to,” said the plaque hanging from a wire shamrock on the wall of Paddy’s On The Square in Long Grove, IL. I bought it. Who could disagree? Not me.

At 94, my mom has a special kind of wisdom – a combination of her own particular insights, the mother-wit gained from nurturing six children, 12 grandchildren, plus four great-grandchildren, along with the lessons learned from living through one of history’s most tumultuous periods.

Born Mariann Williams on December 23, 1920, Mom came into the world four months after women won the right to vote. “I waited,” she says. “And now I look forward to voting for Hillary.”

The youngest of ten children, eight of them boys, she grew up on Chicago’s West Side. Her mother, Mary, was born in Germany; her father, Ralph, had a Welsh father and an Irish mother.

Mom’s childhood was happy. Her parents built a prosperous business buying apartment buildings, hotels and even greenhouses, and moved the family to Florida. Then the Depression hit.

“Their real estate holdings went. We came back to Chicago,” Mom says. “Soon after, my mother was advised that the goiter on her neck should be removed. She didn’t want to go to the hospital. She thought them unsafe and had chosen to have all her children at home. But she was encouraged, against her better judgment, to have an operation she probably didn’t need. An infection set in and she died two months later.”

Mom, who was 11 at the time, credits her dad and her best friend, Nancy, with helping her through her grief.

“Nancy came from a family of girls. Her father had died so she called my father ‘Pa,’ and her mother mothered me.” 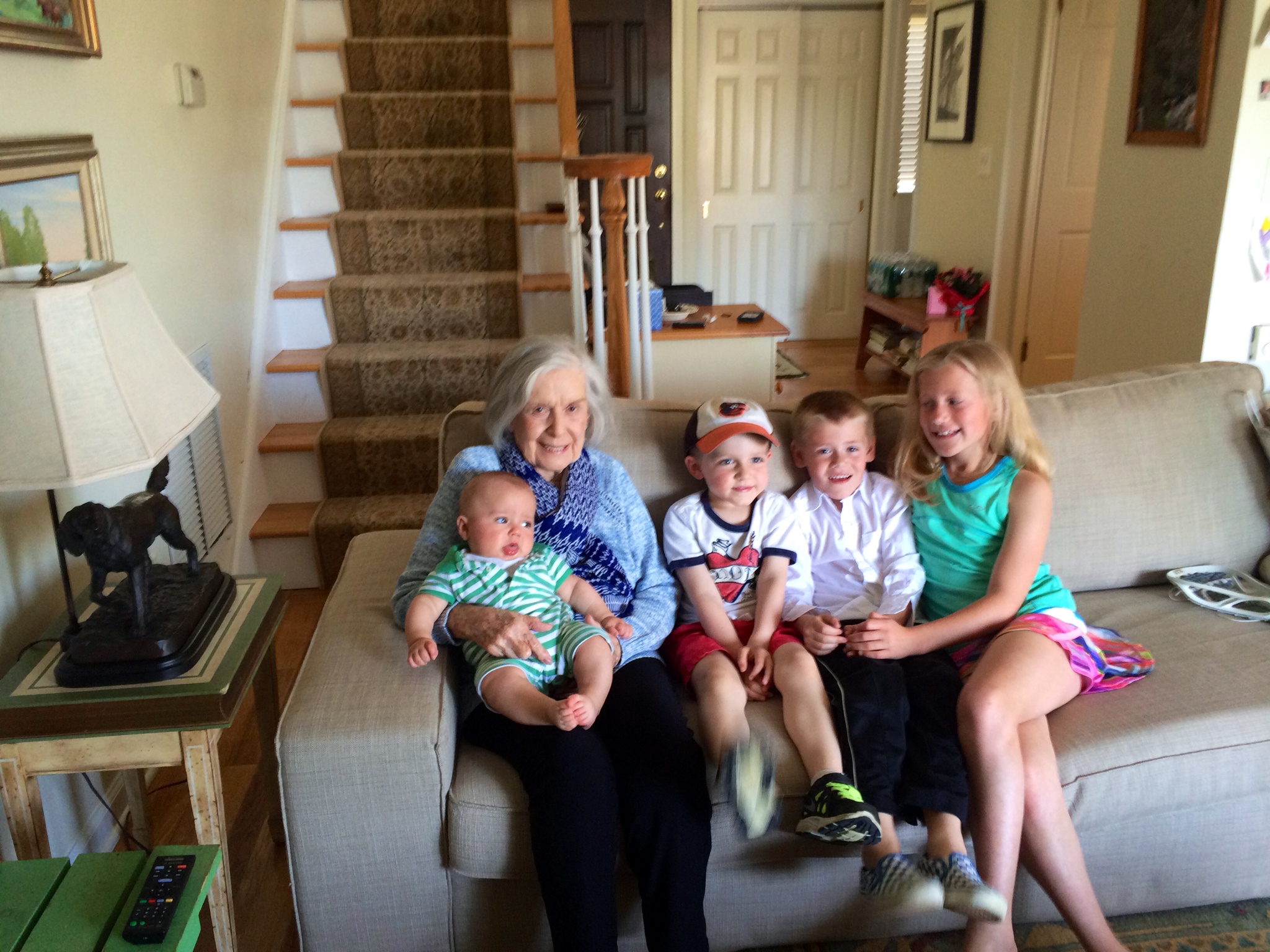 The two friends loved to go dancing to the music of the Tommy and Jimmy Dorsey band, and that skinny boy singer Frank Sinatra. And they still dance when they get together to reminisce about those times.

“I was a freshman at DePaul University in 1938 when I met Mike Kelly, your father. He was a few years older and from the South Side of Chicago. He wore a fedora and said he wanted to be a writer,” she remembers.

But then the Japanese attacked Pearl Harbor. Mike immediately enlisted in the Navy and was chosen for pilot training. He proposed to Mariann the weekend he got his wings.

“After we got engaged, your father’s Aunt Rose would introduce me to her friends by saying, ‘Mariann’s not one hundred percent Irish, but she does have two brothers who are priests.’ And having two priests in the family seemed to balance things a bit.”

Mike was stationed at Floyd Bennett Field, flying escort duty over the Atlantic and then learning how to catapult off aircraft carriers in preparation for an assignment in the Pacific. Both were very high risk.

After the war, Mike and Mariann returned to Chicago, to a community on the South Side where most of the fathers had fought in WWII.

“Did the men talk about their experiences?” I ask my mom.

“Not really,” she says. “They preferred to trade funny stories about their service period. Your dad would tell about how he and a friend flew their planes low to buzz the bus I was travelling in from the base in Cherry Point, North Carolina back to Chicago when I was pregnant with you. Very exciting for me, but their commander wasn’t pleased.”

My mom moved house seven times, because of my dad’s career in advertising. And she took it all in her stride. In fact, moving to her own beat might just be Mom’s secret to a long, productive life.

“Most mothers did not have jobs outside the home, though we certainly all worked. A big family was the norm. Our six, five girls and one boy, was just average. Some of my friends had eight or nine children. Our energy went into family activities, often parish related. St. Patrick’s Day dances, the annual bazaar.”

Every year the mothers turned Queen of all Saints gym into an “Aladdin’s Cave,” complete with roulette wheels, carnival games, cotton candy, etc. Magic! I now realize all those events my mother and her friends created required a level of coordination and invention that easily equaled the rollout of new Apple products.

I took it for granted that every milestone in the lives of my siblings and myself, as well as our dozens of cousins – first communions, confirmations, graduations – would be marked-often at a backyard barbecue with the whole family attending.

There were similar gatherings at Thanksgiving, Easter, Christmas, and many Sundays. We children and the dads helped, but really, it was my mom and my aunts who did all the work. In addition, my parents often entertained and were entertained by friends. I remember luaus and Halloween costume extravaganzas.

“Why all this socializing?” I ask my mom.

“Well, we had a lot to celebrate! Our husbands had survived the war and gotten good jobs. The harsh times were behind us. Like the song says, we learned to accentuate the positive,” my mom says. “Keep involved. Stay active.”

This philosophy helped her through a mastectomy in 1975. “I went under anesthesia for a biopsy. The surgeon identified cancer and decided to go ahead and remove my breast, which I only discovered when I woke up. A shock, of course, but that was the treatment then, and, 40 years later, here I am.”

She is glad that today women have more say in their medical treatment. “And it is great there are so many women doctors now. My doctors are all women and they have kept me going,” she said.

A positive attitude also enabled Mom to care for my dad from the time a stroke immobilized him at age 64 until he died nine years later, and to endure the loss of her sister and brothers, most of whom died too young, though her brother, my uncle Ralph, will be 100 this October.

She attributes her own long, healthy life to all this interaction with family and friends.

“Keep busy. Be cheerful. Care for your family and friends,” she advises.

In May, Mom celebrated Mother’s Day with her great-grandchildren. They call her “GG” and see her as someone who reads them stories and plays endless games of cards. She’s still involved, still caring, and still in great shape at 94. Blessed and grateful are we her family.

“You’re right,” I said, “I won’t. Especially since I know your go-to-gift for your friends is a subscription to the magazine.”

Author Mary Pat Kelly launched her latest his  torical fiction novel, Irish Above All, with a gathering at the Irish...