Last Saturday, May 30th, former Maryland governor and Baltimore mayor Martin O’Malley announced his bid for the Democratic nomination in the 2016 presidential race. O’Malley was inducted into the Irish America Hall of Fame in 2014 and knows his Irish history and the legacy his parents and extended family birthed him into, and he is known to quote from St. Patrick’s breastplate: “I arise today through a mighty strength.” That is what makes this announcement such a watershed for Irish Democrats – he’s a devout, Irish Catholic, sympathetic to Pope Francis, educated by the Jesuits, running for president of the United States. This is an exciting moment.

In this 2007 interview with Patricia Harty, O’Malley referenced his Irish-American heritage as key in connecting with the largely African-American population of Baltimore during his time as mayor of the city. He has always been able to use his background to empathize. “Whenever you read a people’s history long enough,” he said, “you become aware of the triumph of the human spirit, and the sort of universal eternal truths that are the core of the human experience.”

On Saturday, he mentioned the hard work of his own parents, members of the “Greatest Generation,” who did not think of themselves as in any way special, but believed that any generation has the power to become great. These comments hearkened back to his 2014 Hall of Fame induction speech, which he concluded in Irish and in English, exhorting the audience to “remember the people from whom you came.”

For O’Malley, that’s one of Barbara and Thomas O’Malley’s six children. Thomas was a former air force pilot, ward leader in Pittsburg during the tenure of FDR, and a civil rights lawyer, and his mother worked for Senator Barbara Mikulski; together, they spurred him into public service and gave him a deep interest in his Irish heritage. While growing up in Washington, D.C., he would check out Irish history books from the library, and still keeps in touch with his Connemara cousins.

Even his band, O’Malley’s March, champions Irish song and music, which he prides himself in.

“I do think that playing music is a bit of an international language, understood inherently by all people, and it helped me bridge racial divides as mayor of a majority African-American city. Whenever I would visit schools, kids would come up to me and say, ‘Hey, Mayor, I play the clarinet,’ or ‘Hey, Mayor, I play the drums.’ There was that sort of commonality,” he told Irish America. 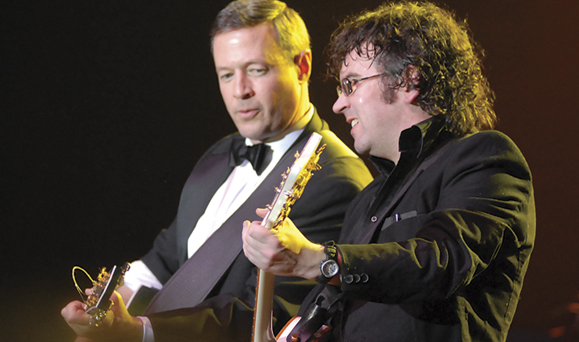 Governor Martin O’Malley joins Leo Moran of The Sawdoctors on stage at his inauguration party.

As Matthew Skwiat, writing for this magazine, commented, O’Malley has always stayed true to his Maryland and Washington roots and has sought to improve the communities he calls home. Recalling O’Malley’s rise to prominence in Baltimore and Maryland, Skwiat notes, “In 1999, at the age of 37, O’Malley became the mayor of Baltimore. After two terms the city’s crime rate was the lowest it had been in over three decades, and investment at an all time high. In 2005, Business Week featured O’Malley as one of the “new stars” in the Democratic party. In 2006, he ran against a Republican incumbent governor and won, and was re-elected in 2010.”

“As governor, O’Malley has championed education (MD has the #1 ranking for best public schools in America), and has made Maryland one of the top two states for science and technology,” he said. “He has also seen the creation of thousands of green energy sector jobs, and has cut state spending more than any previous governor in Maryland’s history. He has also expanded healthcare to 400,000 previously uninsured, been vocal on immigration reform and raising the minimum wage, and signed legislation for same-sex marriage.”

During his announcement speech, O’Malley touched on these accomplishments, while making frequent reference to the American Dream, decrying how not a single Wall Street C.E.O. was convicted of any crimes related to the 2008 economic crisis. He went on to claim that the C.E.O. of Goldman Sachs had told his employees that he was “just fine with either Bush or Clinton,” and followed with a direct challenge to Wall Street, saying, “the presidency is not a crown to be passed back and forth by you between two royal families.” (Though Business Insider mentioned that the first claim was “mostly false,” as Goldman Sachs C.E.O. Lloyd Blankfein has publicly supported Hillary Clinton, but not Jeb Bush).

He mentioned reinstating the 1933 Glass-Steagall Act, which would hold banks accountable for any law-breaking. The American Dream, he claimed, cannot be rebuilt by “catering to the voices of the privileged and the powerful,” but by rebuilding and strengthening the middle class.

He also noted that two of the biggest problems we face today – unemployment and climate change – could find their solutions in one another: “We must create an American jobs agenda for America’s renewable energy future.” The rare spinning of climate change as a “business opportunity” gave listeners a hint about O’Malley’s problem-solving acumen, which he likely picked up in his executive positions as mayor and governor.

A recent Quinnipiac University poll put O’Malley at 1%, trailing behind Clinton at 57%, Vermont senator Bernie Sanders at 15%, and Vice President Joe Biden at 9%. Despite such dismal numbers, O’Malley appears unconcerned, as early primary polls have not always predicted the outcome of an election: he recently reminded The Atlantic that both Carter and Clinton were considered long shots for the presidency, and that he himself went from “single digits to victory” in his 1999 election as mayor of Baltimore. Clinton welcomed him to the race, saying she was “looking forward to discussing strong families and communities.” CNN (and other news sources) have noted that O’Malley would have to outflank Clinton on immigration, especially after her recent announcement to take immigration reform further than the Obama administration has. It is likely that his inclusion in the race, along with the desire to win over supporters of Sen. Elizabeth Warren, might help move Clinton further to the left.

As the polls stand, O’Malley must first overcome Sanders before taking on Clinton, and in this instance, his being relatively unknown may help his cause. “I think the more people see O’Malley, the more they’ll like him,” said Tom Henderson, chairman of the Polk County Democrats. “He’s still an emerging candidate, while Sanders is better known as a firebrand.” ♦