James Joyce and Sylvia Beach at Shakespeare and Company in Paris, Paris 1922.

Literary fireworks are once again set to go off all over the world as nations celebrate Bloomsday on June 16. Celebrated in honor of Leopold Bloom, the quixotic wanderer in James Joyce’s classic novel Ulysses, a smorgasbord of literary revivals and readings will take place in Ireland and across the globe. Bloom, who may have been prophetically alerted to his impending “day” said “as you now are, so once were we.” These words echo across history as reenactments and plays of Ulysses are put on and as people don Edwardian costume in the guise of Joyce’s famous characters. 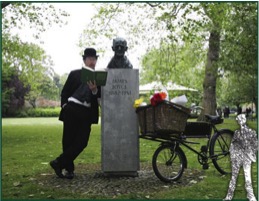 The heart and soul of Bloomsday is in Dublin which Joyce had brought to life in all of its fractured wretchedness throughout his epic and day-long tale. For most of us, Ulysses is the impenetrable novel that sits confined on a dusty bookshelf, nodding its impassive head to passerby, as its owner quivers with trepidation since they “haven’t gotten to it yet.” With Bloomsday however, the gilded difficulty of Ulysses is stripped away as Joyce’s novel is not only celebrated, but made sense of in raucous and spirited fashion. For those lucky enough to get to Ireland, Dublin this year offers something for even the mildest Joycean; from readings to full scale re-enactments.

Even though Joyce referred to Dublin as the “city of paralysis,” an energetic vibe permeates the celebration of their cantankerous artist. “Bloomsday” tours are widespread where you can visit the classic scenes of the novel like Sandycove where Stephen Dedalus had gone to in the early chapters and contemplated life. Marvel at the Martello Towers or stoically gaze as Daedalus had done, and be sure to stop in at the James Joyce Museum. For those less seafaring you can head to Davy Byrnes pub where Bloom had a Gorgonzola sandwich with its “fresh clean bread, with relish of disgust, pungent mustard” and “feety savour of green cheese.” Your pub tour should commence with a visit to Barney Kiernan’s pub which was the scene of “The Sirens” chapter. Before you leave Dublin, be sure to check out the James Joyce Centre (which gives you helpful tips about what’s happening in Dublin and interesting tidbits on Joyce himself.

Elsewhere around the world, Australia will be celebrating Joyce with film and food at Bloomsday in Melbourne. This year they are hosting the world premiere of a play “The Reel James Joyce” which looks at Joyce’s relationship with cinema, a seminar with Steve Carey and Philip Harvey will follow with dinner. Parisians can flock to Shakespeare and Company, the bookstore which was originally headed by Sylvia Beach who was one of the first publishers of Ulysses in 1922.

A bit closer to home, our nation’s capital is celebrating Joyce with events befitting royalty. The Embassy of Ireland is celebrating Bloomsday & Yeatsday on Washington DC’s DuPont Circle Park from 12.30pm to 1.30pm on Tuesday 16 June. Bring a picnic and enjoy music and readings from the works of two of Ireland’s greatest writers, and help recreate the atmosphere of 1900s Dublin by dressing in the style of the day.

You can also join in for a marathon reading of Ulysses – the entire book, from start to finish. It will run for approximately 30 hours from June 15 at 5pm through the evening of June 16, at the classy Petworth Citizen bar on Upshur Street NW. There will be coffee, Irish whiskey, and food aplenty, including specialty cocktails, two breakfasts, and – during opening hours – Petworth Citizen’s usual delicious menu. 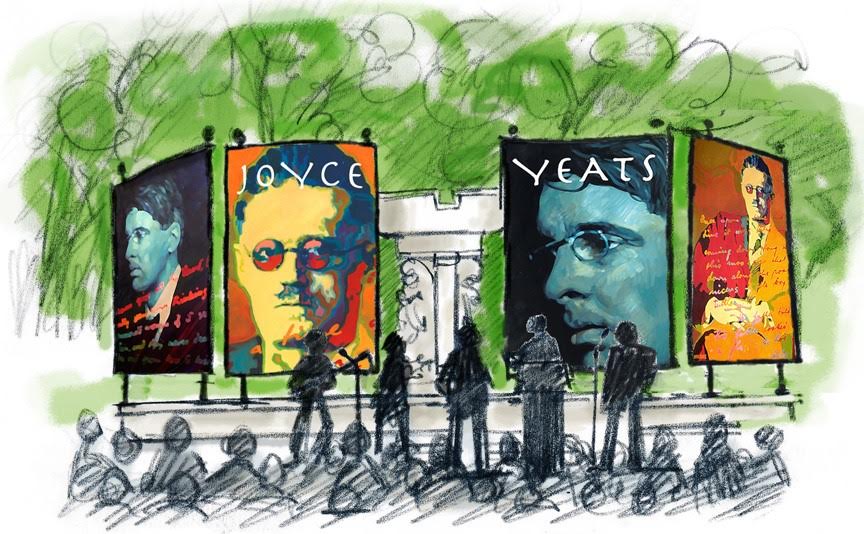 A public celebration of Yeats and Joyce aat Dupont Circle. This image was used for the program and chosen through a design competition at the Irish Embassy in Washington, D.C. (Photo courtesy Department of Foreign Affairs, Ireland)

Not to be outdone, NYC is going all out with tributes and celebrations of Joyce. Breakfast at Bloom’s Tavern on East 48th Street begins at 7.30 a.m. where The Origin Theatre Company will be featuring such actors and Broadway stars as Patrick Fitzgerald, Malachy McCourt, Charlotte Moore, and Fiona Walsh. Music by Irish folk singer Alan Gogarty, bespeckled Joyce imitators, and a classic Irish breakfast where you can relish, like Bloom, “the inner organs of beasts and fowls.” Meanwhile at Glucksman Ireland House, the Irish Studies Center at NYU, the Irish American Bar Association of New York will host its 6th Bloomsday Celebration. It will feature prominent New York lawyers as well as a reenactment of the court case trial brought against the Little Review, which freed Ulysses from censorship in the United States.

No matter where you find yourself on June 16, the spirit of Joyce will surround you, whether it be eating gizzards for breakfast, enjoying a pint in your local pub, or finally cracking open Ulysses during your lunch break. ♦