The long days of summer are upon us, and gardens everywhere are in bloom. Admiring the pretty flowers will satisfy some, but Sláinte columnist, Edythe Preet, likes to eat her plants.

Freshly picked salads from one’s own garden, even if only from a few container plantings, are one of the great gourmet pleasures. And nothing pretties a bowl of mixed greens like a confetti of colorful petals. Nor is anything so show-stopping as a floral bedecked dessert.

Luscious chocolate mousse crested with candied violets, squares of shortbread shot through with tiny lavender buds, or a lattice of scented geranium leaves baked into a pound cake will have your guests oooing and aaahing over your kitchen expertise.

Modern chefs would like to take credit for adding floral flourishes to our dining delight, but they have merely revived a culinary custom as old as civilization itself. Flowers have been used in cooking since the days of the Egyptian dynasties, the Greek philosophers, and the emperors of Rome.

In ancient Ireland what to eat was more a matter of survival than a matter of presenting pretty plates, but it is not a stretch to imagine Neolithic Celts gathering flowering plants as food. Chief among those harvested would have been the ubiquitous dandelion. With its fluffy seed pompoms so easily carried by the wind, dandelions flourish all over the world and have a 30-million-year botanical pedigree. Every part of the plant is edible. The leaves taste like chicory; the flowers can be used for tea or made into wine; when the roots are roasted and boiled, the resulting beverage is similar to coffee. Nutritionally, dandelions are rich in vitamins A, C, and K, plus calcium, iron, potassium and manganese. And if the leaves are plucked but the root left in the ground, the plant will re-grow as if by magic!

Three other blossoms – elderflowers, gorse, and the wild rose – also have long Irish culinary histories. The shrub-like elder tree (Gaelic: trom) has flourished in Ireland for more than six thousand years. As its spindly wood was better for burning than construction, the Brehon Laws categorized the elder as a ‘third class’ tree, but its flowers and berries were prized culinary delicacies. Like its cousin the honeysuckle, which many a child has sipped for its nectar, elderflowers have a heady sweet scent, and folklore tells of unwary sniffers who have fallen into a deep sleep and been carried away to live with the fairies. Merely dipping a bunch of elderflowers into a light apple jelly will infuse it with a subtle floral taste. Pancakes made with fresh elderflowers stirred into the batter are an annual Irish springtime treat. The blossoms can also be dried and brewed to make tea or flavor fruit tarts and vinegar, but their most exotic use is when they are made into elderflower wine, cordials, syrup, and liqueur. Nutritionally, elderflowers have a high vitamin C content.

Gorse (Gaelic: aiteann) is a large shrub that grows as hedgerows all over Ireland. It was categorized in Brehon Law as one of the Losa Fedo (Bushes of the Woods), and because the branches are very thorny, Druids believed the gorse had protective power. The thorns were also a good reason for planting the densely branched bushes as a living fence to thwart intruders and deter herds from straying outside their pastures. In early spring, gorse is covered in bright yellow blossoms, earning it association with Lugh, the Celtic god of light and genius. Unlike most plants, the bushes flower much of the year, giving rise to the proverb: “Only when gorse is out of bloom is kissing out of fashion.” While gorse foliage was used mainly as animal fodder, the coconut-vanilla scented flowers have long been the primary ingredient in refreshing cordials as well as a flavoring and coloring agent in whiskey. Presently, wild food advocates champion even more creative uses for the blossoms, including ice cream!

Roses grow throughout the world and 60-million-year-old fossils have been discovered in North America, but Ireland’s own native variety is the wild dog-rose (Gaelic: feirdhris). The fragrant pale pink five-petaled flowers can be found on sprawling bushes all over the island. As the blossoms fade they are replaced by small round seedpods known as ‘rosehips’ that ripen to dark red through the summer. Since the 16th century, rosehips have been an autumn culinary delight. Simmered slowly with water and sugar, they reduce to a thick jam that is delicious on toast, stirred into muffins, filling tarts, or served as a condiment with roast meats. Packed with twenty times more vitamin C than oranges, tea brewed from dried rosehips is a good winter cold preventive; they have also long been used to prevent and treat scurvy. While visiting Ireland in the early 20th century, the dog-rose inspired Irish American stage actor, songwriter, and singer Chauncey Olcott, whose hit tunes include “When Irish Eyes Are Smiling,” to compose the famous romantic song “My Wild Irish Rose.” When it comes to promoting culinary uses for Ireland’s edible flowers, Myrtle and Darina Allen, of County Cork’s Ballymaloe Cookery School, deserve bouquets of gratitude. Lavender, nasturtiums, pansies, violets, chrysanthemums, daylilies, roses, scented geraniums, and more grow in the school’s kitchen garden among a wide variety of vegetables and herbs. The flowers regularly appear in the Ballymaloe restaurant as garnishes on salads and soups, flavor enhancements in drinks, and embellishments on desserts.

Chives and herbs such as basil, sage, and borage produce blossoms that are often more potently flavored than their leaves. Pansies and johnny-jump-ups are members of the violaceae family that includes spring violets, and all can be candied whole or made into sweet syrups. Marigolds pack a triple bonus: they are beautiful border plants, their scent deters many insects, and the petals are lovely accents on salads and vegetables.

One easy floral recipe involves carnations, which were brought to England by the Normans and arrived in Ireland with the Anglo aristocracy. The tiniest members of this family are called dianthus or pinks. Nursery plants are rarely scented, but pinks grown from seed frequently smell like cloves. In Medieval times when spices were prohibitively expensive, pinks flavored wine that had begun to sour. While modern vintages are sublime on their own, one must admit that adding pinks petals to a light Chardonnay would be a fine way to toast a summer day. Sláinte!

GATHER SAFELY: Before adding flowers to your culinary repertoire, a few cautions are imperative. Never eat a flower, its leaves, roots, or bulbs unless you have researched whether it is indeed edible. Some plants, and in some cases parts of plants, are so poisonous that they will kill. A few of the deadliest are all members of the Narcissus family (including daffodils).

One must also take care not to ingest any flower or plant part that has been treated with an insecticide. This is especially true of commercially grown plants. Never eat blooms that are on a plant when you buy it. Always pinch these off and wait until a new series appears.

Lastly, some advice how to prepare flowers for culinary use. Carefully trim away each petal’s white base, which is almost always bitter. The same rule applies to most flowers’ calyx, stamen, and pistil. 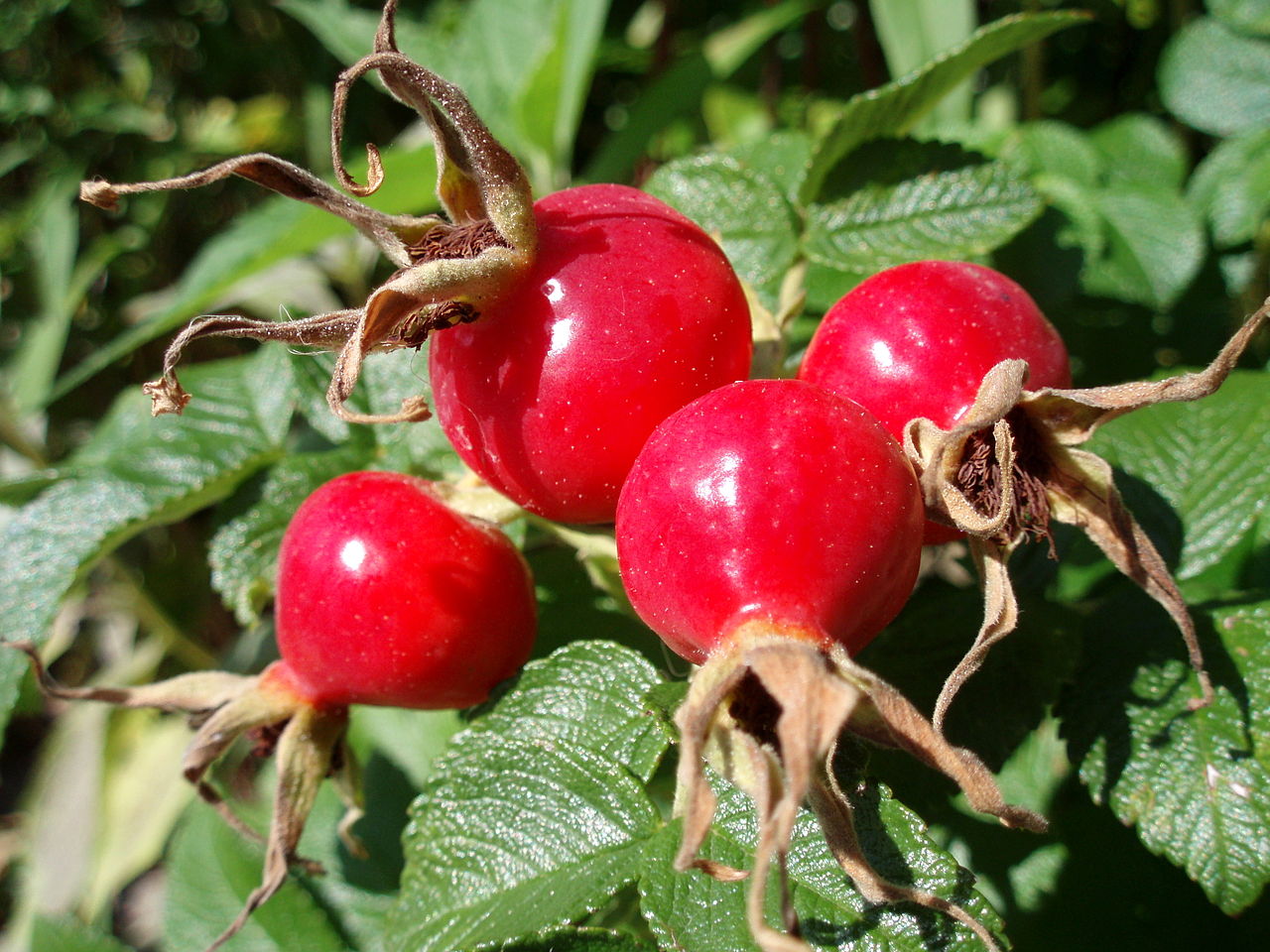 (To prepare rosehips, cut off stem and flower ends, then cut each rosehip in half and remove seeds.)

Put the prepared rose hips, 3/4 cup water, and lemon juice in a blender; blend until smooth, about 15 seconds. Small bits of rose hips skin are okay. Gradually add the sugar while blender is running. Blend until sugar is dissolved, about 30 seconds or so. Stir the pectin into the second 3/4 cup water in a stainless steel or enamel saucepan. Bring to a boil; boil hard for about 1 minute. Slowly pour into the rose hip mixture; blend for about 30 seconds. Pour into small containers with lids. Store some in the refrigerator and use within a few weeks. Store the rest in the freezer where it will keep for up to a year. Makes approximately 4 cups. 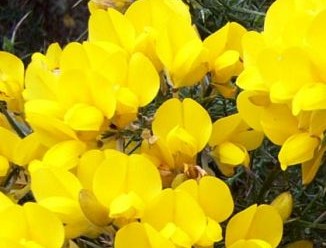 Bring the milk and cream gently to the boil in a heavy-bottomed saucepan. Add gorse flowers and leave to infuse for 30 mintes.  Whisk the egg yolks with a little of the infused liquid and add to the saucepan. Heat gently till mixture barely thickens. Add the honey. Strain through sieve. When mixture is cold put it into an ice cream maker. Makes 1 litre.

In a stainless steel or enamel pot, bring the water to a boil. Add the sugar and stir until it has dissolved. Grate in lemon zest and juice. When water has cooled add blossoms. Leave to infuse for at least 24 hours, covered. Strain through muslin or double cheesecloth. Cool and refrigerate. You can also freeze some for use at a later time. Serve chilled or add to sparkling water for a refreshing drink. Garnish with a sprig of mint.