Christina Noble, center with baby, surrounded by children she has rescued from abandonment. She is now the subject of a new movie called "Noble" starring Deirdre O'Kane.

The story of Christina Noble, whose memories of her poverty-ridden childhood in Dublin inspired her to help thousands of children in Vietnam, is now the subject of a major movie.

Christina Noble isn’t quite what I expected. I had anticipated someone akin to Mother Teresa dressed in a simple cotton sari, but the woman who greets me in the foyer of Dublin’s Shelbourne Hotel is wearing a fluorescent pink fluffy jacket, and her peroxide blonde hair is pulled back off her face into a messy bun. If she doesn’t look like she belongs in one of the grandest buildings on St. Stephen’s Green, it’s because she doesn’t. Noble belongs on the streets of Vietnam where she has worked with street children for the past 25 years.

Mama Tina, as she is known to the children, may not be as polished as the people who surround her in the Shelbourne Hotel, but she has a far more interesting story to tell. It’s a story that is told in a new film called Noble.

Directed, written and co-produced by Stephen Bradley, this biopic is the brainchild of his wife Deirdre O’Kane, one of Ireland’s best known stand-up comedians, who stars in the film.

O’Kane was struck by Christina’s story many years ago. “I read her books 20-odd years ago and thought to myself that I was definitely going to meet her one day,” she remembers. “Then, after I started my career as a stand-up comic, an email arrived asking if I’d emcee an event for the Christina Noble Foundation. I ended up doing it every year for five years and got to know Christina as a result.”

The idea to make a film about Noble wasn’t an immediate one. “Steve had always wanted us to work on a project together but I never had any ideas to suggest,” says Deirdre. “He brought me out for lunch for my 40th birthday and asked me again. I was exasperated at this stage and almost without thinking about it, I said I wanted to make a film about Christina. The idea must have been in my head all along. I just didn’t realize it.” 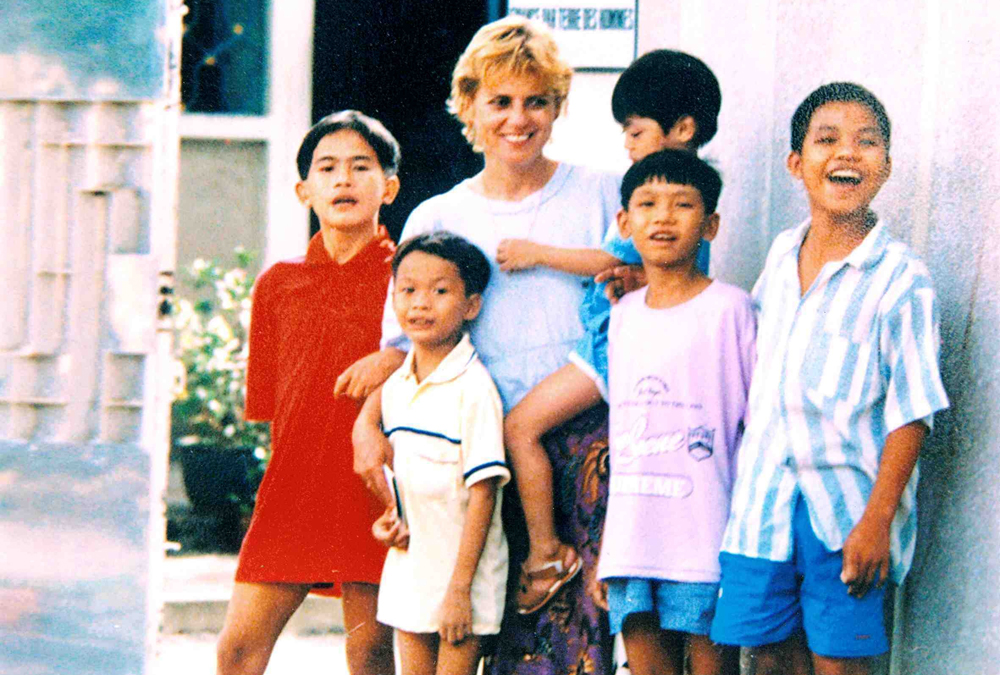 Christina Noble in Vietnam with some of the children in her care in an undated photograph.

It was the combination of Christina’s story and the strength and warmth of her character that intrigued Deirdre. “Her story can be grim and relentless but Christina herself is a fun-loving person,” she says. “She bursts into song anywhere and everywhere. She’s a fighter whose spirit has not been broken.”

I see these aspects of Christina’s personality for myself when we meet up in early February. She tells me of growing up in the Dublin tenements of the 1940s. Her mother suffered from ill health and her father spent what little money there was to be had on drink.

“He was injured in a boxing match and was left with permanent ringing of the ears. He started to drink as a result,” she says of her father. Her parents were from different backgrounds. “My mother was from the country and was very particular. She’d put my hair in rags to make it curly,” she recalled wistfully.

When she was ten, her mother died and Christina and her siblings were sent to different orphanages. She spent four years in an industrial school run by nuns in the west of Ireland, eventually escaping to Dublin, where she slept rough in a hole in the ground she dug for herself in Phoenix Park. There, she was gang raped, resulting in a pregnancy she carried to term. Christina was sent back to the nuns, who forced her to give up her baby.

When her story gets too much for her to recount, Christina starts singing instead. As a child, she used to busk to make money for her family. Now she appears to find consolation in singing.

“I love singing,” she says. “Everywhere I go, I get people to join me in a song.”

The young Christina also found solace in her faith. “I used to cry and cry at the thought of Jesus being crucified,” she says. “I loved God and Jesus so much. I still do.”

At the age of 18, she went to England and soon got married. She had three children, but her marriage proved to be difficult and unhappy.

Misery appeared to be all that life had in store for Christina, but this changed following a strange dream she had in 1971.

At that time, Christina wouldn’t have been able to find Vietnam on a map but 18 years later, in 1989 after her marriage ended, she decided to visit the country. She had very little money, but her first sight of the street children of Ho Chi Minh City made her realize why she was there. “The children needed me,” she says. “Everything I have done since then, I have done for the children.”

The film portrays exactly what Christina has done. It shows us how she set up the Christina Noble Children’s Foundation and how it runs various shelters, medical centers, educational scholarships, and other schemes that have transformed the lives of approximately one million children in Vietnam and, since 1997, in Ulaanbaatar, Mongolia, too. 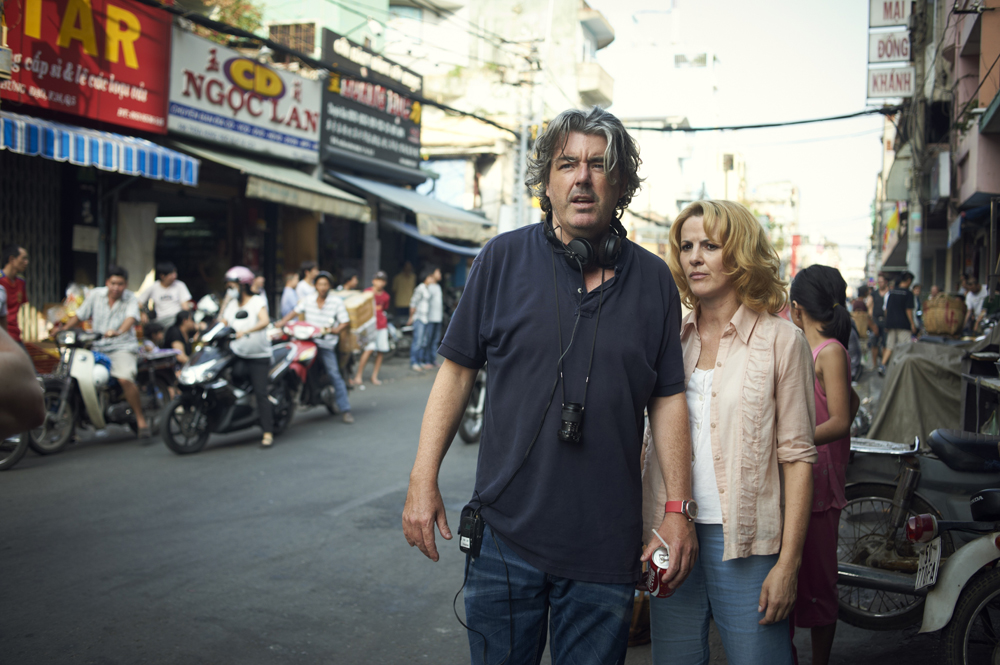 Deirdre O’Kane and husband Stephen Bradley on the set for Noble.

The film cuts between Christina’s life in Vietnam, her early life in the tenements and the industrial school, and her life as a teenager and young married woman in England.

Deirdre portrays Christina as she embarks on her new life in Vietnam, and it’s a role she clearly loved playing.

“It’s so special to me; I may never have another job like it,” she says. “I want everyone to know there are people like Christina out there doing miraculous things. She has achieved amazing things and she shows us that we can, too.”

Although she relished the role, the moviemaking process was not easy for Deirdre and her husband. Their first challenge was convincing Christina to give them permission to make the film.

“It took us two years to get her to sign over the rights,” says Deirdre. “Christina has had her trust in people shaken a lot, but I knew we were the right people to make the film. I felt it was divined.”

Getting permission was merely the beginning of the process. Whittling Christina’s eventful life down to a manageable screenplay was the colossal task facing Deirdre’s husband Stephen. “I took a back seat while they got to know each other,” says Deirdre. “They spent a lot of time together and she took him to different places, including Phoenix Park where she had lived in a hole in the ground.”

Capturing the essence of Christina’s personality was Deirdre’s challenge. “She’s so multifaceted and there’s too much of her to show in 100 minutes,” laughs Deirdre. “I’d been observing and watching her for years, but I decided it was best to just focus on the actual screenplay. I read it every day for four months and listened to recordings of her voice using my headphones so I could get her accent.”

Gathering a cast came after that. Deirdre plays the older Christina, and Sarah Greene, the Cork-born actress best known for her recurring role as Sarah in the television series Vikings, plays her as a young woman. Noble also stars Brendan Boyle (who plays John Bates, the valet in Downton Abbey) as Gerry Shaw, the businessman who helps Christina fund her project, and Liam Cunningham (best known as Ser Davos Seaworth, the former smuggler in Game of Thrones) as Christina’s father. 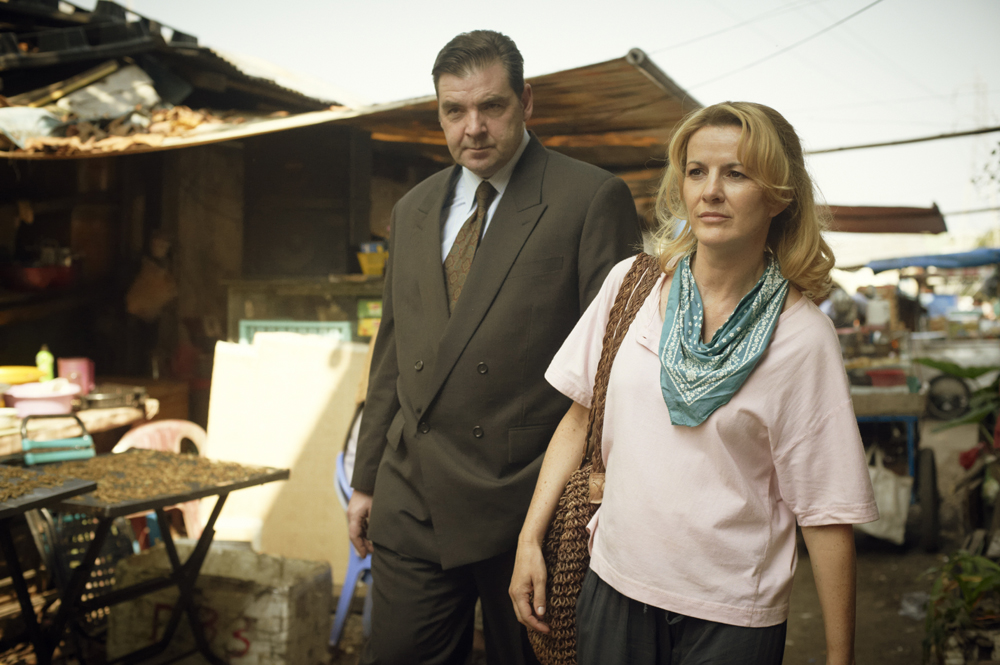 Deirdre O’Kane and Brendan Boyle in a scene from Noble.

Finally, there was the crucial test of ten weeks filming in Vietnam. “It was chaotic and constantly felt as though the wheels were going to come off the entire film because there is no infrastructure there,” says Deirdre. “People usually film in Thailand instead, but we wanted to be true to Christina’s story and we wanted to use kids from her foundation in the film.”

Their efforts were ultimately worthwhile. “Vietnam is an incredibly special place and there was good karma for us everywhere,” says Deirdre. “There’s a scene in the film where I sing a song in a bar and afterwards the barman told me Christina used to sing in that same bar 20 years ago. I didn’t know that. We’d just picked the bar at random. That sort of thing kept happening throughout filming – there were so many people who had stories about Christina and what she’d done.”

Noble, which opened across the U.S. on May 8 to good reviews, won the Panavision Spirit Award at the Santa Barbara International Film Festival, and prizes at Dallas, Nashville, San Diego and Newport Beach. “The story keeps the kettle boiling throughout the ever-engaging 100 minutes, which might be down to the funny scene/angry scene/uplifting scene/touching scene (and repeat) narrative style, or the performances [Stephen Bradley] wrangles out of his three leads,” Gavin Burke wrote in a review for entertainment.ie.

Justin Lowe, praised the acting in the Hollywood Reporter, writing, “O’Kane nicely captures Noble’s signature mix of compassion and defiance as a survivor for whom defeat just isn’t an option. The young actors playing the childhood and teenage versions of Noble capably lay the groundwork for O’Kane to build upon. The Vietnamese casting is similarly strong, particularly Nguyen as the suspicious and protective caregiver who lets down her guard just enough to give Noble the fighting chance she needs.”

“Our American distributor is Aspiration Films and their name is a good match for our film,” says O’Kane. “You can’t help but have more love for humanity and a bigger and more open heart after you hear Christina’s story. I think her story is also important for those who are down on their luck. Christina was 44 when she changed her life. A lot of people think their road is carved out for them by the time they arrive at that age, but for her, it was only beginning.”

From what I saw when I met Christina in Dublin, her story is far from over. She had just returned from New York where she had been given the Albert Schweitzer Leadership for Life Award. And although she was recovering from a recent medical procedure, she was already planning to return to Vietnam as soon as possible.

2 Responses to “Mama Tina:
The Story of Christina Noble”