All Too Human: An Interview
with Author Rob Doyle

Breakout novelist Rob Doyle discusses the existential strands of isolation that run through his debut, as well as the processes of writing, his relationship with Ireland, his views on Irish and American literature, and finally what he’s working on next.

The publication of Dublin native Rob Doyle’s debut novel, Here Are the Young Men ushered in the arrival of a new literary talent whose darkly tragicomic story became one of the best reviewed books in Ireland last year and was shortlisted for the Irish Book Awards Newcomer of the Year Prize. It appeared on The Irish Times Books of the Year lists of Colm Tóibín and Tara Flynn, with Tóibín noting its “sheer style” and “integrity of vision.”

Doyle, who holds a first class honors degree in Philosophy and an M.Phil. from Trinity College, has been writing fiction for years with publications in the Dublin Review, Irish Times, and Gorse.

Speaking to Irish America from Ireland last year, he noted his passion for writing, saying, “I’ve always needed some creative form or outlet. When I don’t have some form of expression, I’m just not happy or satisfied.” He found his initial passion in music, playing for a band in his youth, writing songs and unleashing his inner voice.

Here Are the Young Men reiterates that passion – the title comes from a Joy Division lyric, and the book itself brims with its own soundtrack of adolescent angst with music from The Pixies, The Ramones, and The Clash. Those references were important, not only in conveying the biographical underpinnings of the story, but by placing the novel in its own time and place, circa 2003 Dublin at the tail end of the Celtic Tiger (“things that I experienced or noticed growing up”). “In the novel, that milieu which is the Dublin days of a certain era, are set amongst these young guys.”

It is this gritty underbelly of Dublin that Doyle brings to life so effortlessly. He captures the boredom, fears, and anxieties of boys on the edge of manhood in an Ireland about to bust. This bold and direct effectiveness has drawn many comparisons to other controversial counterculture works of literature like A Clockwork Orange and Trainspotting. For Doyle, those characterizations are sound.

“I would definitely think [those works] make sense as markers which give readers the sense of which kind of lineage this novel is in,” he said. But he also notes that Here Are the Young Men “is its own novel and stakes out its own territory.”

That is a territory in which few novels have gone before. What makes Doyle stand out from the rest is his innate sense of dialect where he is able to capture the tonal musicality of an Irish brogue. “I found it wonderfully liberating when I realized I was writing a novel set in Dublin and set among Dublin characters. It was just ready to be reaped,” he said. “I could just take chunks out of this grand voice, this dialect that was waiting in my unconscious or my memories, waiting to be exploited.” 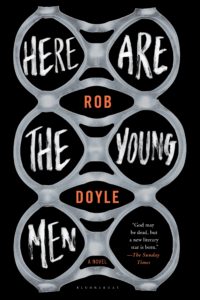 You wrote Here Are the Young Men in London, America, and around the world. Did you find that distance to be important?

Yeah, absolutely. It was kind of a surprise to me. After studying, I spent a number of years wandering around the world. I assumed I would end up writing about all of that stuff. The first book I had in mind would be about somewhere exotic or far flung, but then when I came to London and started to write, it was a revelation to me that I wanted to write about Dublin, or that was what came naturally.

And yet having that distance was crucial. Its temporal distance and spatial distance. I completely understand that Joycean idea of completely leaving the place and reconstructing it in fiction like he did in Ulysses. It’s wonderful because when you’re not there, that’s when fiction can happen at its best. Where you have to reinvent or reimagine the city so it comes from a more intense place. You are using your memories and emotions and imagination. Plus, when you’re away, the writing, the energy, is fueled by a kind of longing and nostalgia. It was written with a kind of longing and yearning for Dublin where I grew up. It’s very beautiful, despite its drawbacks.

Speaking of Joyce, one of your characters mentions Dubliners and Ulysses, and there is reference to Wilde’s “Ballad of Reading Gaol.” Do you read any classic Irish authors?

I do – I love Wilde. I loved Wilde since I was a teenager, but I haven’t read him in a while. Joyce is an ongoing interest. I prefer Ulysses to the rest of it. And Beckett, of course. I have a strange relationship with the Irish literary tradition. Not all of it really excites me, but the major ones are all of interest.

American culture seems to have a strong impact on the characters in the novel. They are listening to American music, TV, video games. Was that deliberate?

These are guys who are growing up in Ireland more on American culture than Irish culture. Living in Ireland, it feels almost more exotic to hear traditional Irish music than it would be to hear American blues music or something like that – that’s how convoluted things have become.

It’s funny that a lot of the novelists and authors I read growing up and who influenced the novel and me in general would be American authors who explore those themes. Themes of media saturation or technological inundation of daily life, people like Don Delillo, Bret Easton Ellis. David Foster Wallace is really the master of all of this.

The novel takes place 10 years ago at the end of the Celtic Tiger. In your opinion, has Irish society gotten better or worse since then?

It’s very hard, when I think about that question, to separate my own subjective experience of things from any objective sense of how things are. In the intervening years since I left Ireland, I think that in Ireland things did change. There are lots of problems; the economy has collapsed and is very slowly coming back into shape. It’s a far more tolerable and tolerant place to live. Kind of gentler. There is more of an open-mindedness, less of a crassly materialistic outlook which really did predominate for a while.

How do you write?

The weird thing about my writing process is I feel it’s something nebulous or something that hasn’t become particularly hardened into one definitive thing. It depends. When I was writing that book, it was very straightforward. When I was living in London writing the early draft, I would come home from work in the early afternoon and bring my laptop to the library. I had a particular project to work on. Sometimes I’ll write on a train with pen and paper. There has been no absolute hardened process that has taken place yet. I’m weary of the puritanical tradition of getting up every morning and starting up at nine o’clock. I’d be wary of that because I don’t want to take away that joyful or gleeful side of writing. I’m kind of attracted to the idea of hovering around a desk and only writing when the mood takes you.

The character Jen always seems to be in the background. She appeared to be the one light or the glue that kept all these characters together. Is that something you wanted to do?

I’m really happy with the character of Jen because [the novel] is such an intense exploration of masculinity and young masculinity and the contemporary male psyche. That’s what it tries to be and that is what it is. She really is the only major female character in it. I didn’t really plan the novel, I just followed my intuition and let it come out whichever way it came out – trust in the unconscious. She kind of offers a certain amount of hope to Matthew, who is more or less the protagonist throughout. She offers him a kind of sense of hope or a groundedness, but then he can’t seem to accept it. He can’t seem to reach out to the sources of life or goodness or nourishment.

Throughout the novel, the characters wrestle with reality vs. artifice. There is a very thin layer between reality and artifice. Care to explain that?

Kearney and Rez, in a way, are the flip sides of the same coin. They are both struggling under an inundation of simple reality, and they are both struggling in their own way from separating reality from unreality. For me, it’s the media landscape and the kind of hallucinatory holographic reality that we all live with these days. [Kearney] is going to play his video games and is not interested in separating the real from the spectacle of the video game, whereas Rez is smoking too much weed and worrying that he can’t tell the difference between the simulation and the real. They are not really new ideas, but very rich material to explore in fiction because they are very prominent, prevalent worries and experiences that people have.

I’m putting finishing touches on a new book of short fiction due out next year. It’s very different, it’s not in the lineage of the traditional Irish short story. There are more influences like Borges, Bolaño, and Thomas Bernhard.

After that, I will take a break from short fiction. I certainly intend to be in it for the long haul, not necessarily novels. A lot of my favorite books these days are working on the margins of the novel, somewhere between fiction and nonfiction, but I do certainly want to be writing books for the rest of my life. ♦

Here Are the Young Men was published in Ireland and the U.K. by the Lilliput Press last June and is due out in the U.S. this June from Bloomsbury. His forthcoming novel, This Is the Ritual, will be published by Lilliput and Bloomsbury in January 2016.

One Response to “All Too Human: An Interview
with Author Rob Doyle”