A Challenging Response:
Concern in Nepal

A man stands in the rubble of what were offices and shops in Gongabu, Kathmandu one week after a 7.8-magnitude earthquake rattled the capital on April 25th. (All photos: Crystal Wells / Concern Worldwide)

By Kieran McConville, Contributor
May 8, 2015

Concern Worldwide has been responding to emergencies around the world since it was born amid the chaos of the Biafran war in Nigeria 47 years ago. Floods, famines, wars, and earthquakes all provide different challenges and test the skills and ingenuity of those who respond. The latest disaster, a 7.8-magnitude earthquake here in the south Asian nation of Nepal, will present its own unique set of challenges.

Concern’s emergency response team was preparing to deploy within hours of the quake, with team members converging from all over the world – Ireland, Canada, the U.S., the UK, India, and Germany. And straight off it became clear that the biggest obstacles to overcome would be logistical.

Our flight from New York brought us to Abu Dhabi and then onward to the Nepali capital, Kathmandu. Or at least to the skies over Kathmandu, where we circled for an hour before redirecting south to Lucknow in India and a long wait for air traffic congestion to clear. It wasn’t to be, and our flight returned to Abu Dhabi, to try again the following day. For us, frustration at a delay in getting to work, while for others onboard, heartbreak at missing the funerals of loved ones who perished in the earthquake. 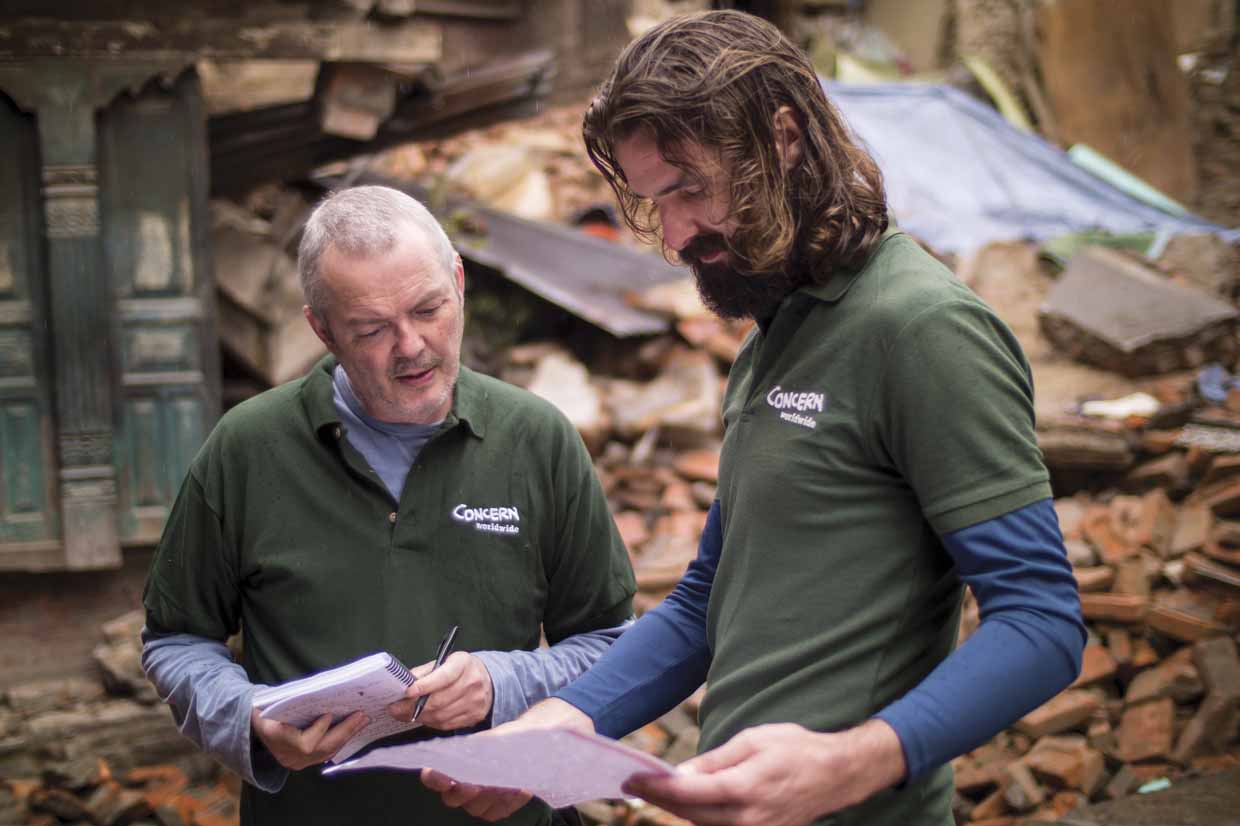 Key to any emergency response are logisticians, or “loggies” as they’re known in this world. These are the men and women who make things happen, organizing everything from in-country communications to accommodation and enormous cargo planes of relief supplies. In the days after this disaster, their job would be frustrated by a lack of capacity at Kathmandu airport, a bottleneck in the supply chain of much-needed aid. Road convoys of pre-positioned supplies began to make their way from the Indian cities of Delhi and Mumbai, with traffic and border delays to overcome.

But in the midst of this great logistical web, it’s often easy to lose sight of what is most important – or more to the point, who is most important. Heartbreaking images of people desperately searching through the collapsed rubble of homes and ancient temples in Kathmandu served to remind us of the human cost. Over 7,000 people lost their lives on April 25th and hundreds of thousands of people were left homeless. The response from around the world was amazing, and the international search-and-rescue crews who joined local teams in those first few first days did an incredible job. 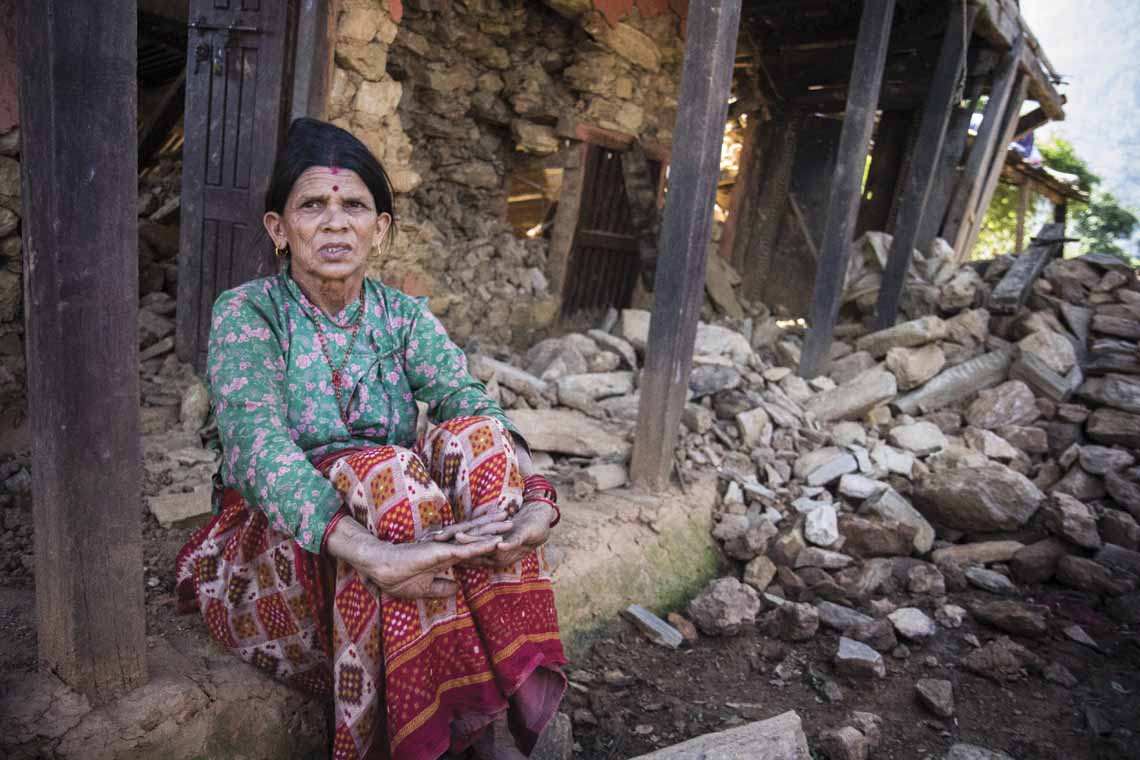 Tulasa Aryal, 58, sits on the porch of her earthquake-ravaged home in Bakrang, a village near the epicenter of the earthquake. Roughly an hour’s drive from Gorkha, Bakrang is among the hardest hit villages in the 7.8-magnitude earthquake that hit Nepal on April 25. Out of 793 houses homes in Bakrang, 515 were completely destroyed.

But the scale and complexity of this disaster would soon become really clear. We bump and crash our way up a steep hillside, within view of the snowcapped Himalayas. This is the district of Gorkha, close to the epicenter of the earthquake. Here in the hills it’s strictly four-wheel-drive territory, and eventually even off-road vehicles are no use. Nepal has the lowest road density in southern Asia and nearly 90 percent of the population is rural. The communities here are among the poorest in Nepal, eking out a living by terracing the mountainsides and growing maize, rice, and potatoes.

The village of Bakrang gives us a good idea of what has happened here, far from the glare of international publicity. It has literally been flattened. People sift through the piles of timber and brick that were once their modest homes, hoping to salvage whatever they can. 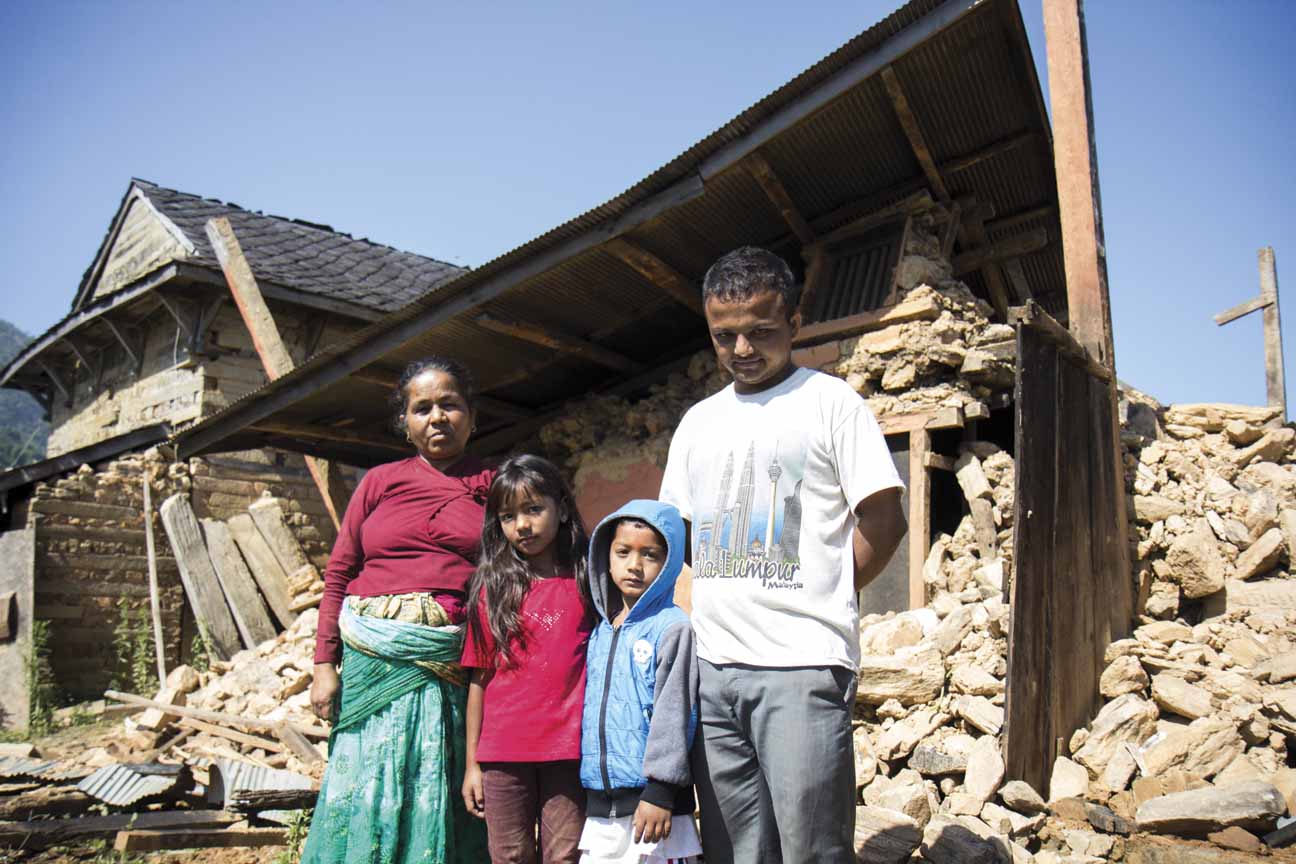 Kamala Neupane, 54, Ayushma Singh, eight, Ayush Singh, five, and Pratap Neupane, 23. Kamala Neupane lived in the home and was in Bakrang when the earthquake hit. Her husband passed away years ago and her children all live outside of Bakrang, so she spent the hours after the earthquake trying to reach her children. her son, Pratap, is student in Kathmandu and came back to Bakrang to help his mother recover what they can from the rubble.

“Most of my things are buried under there,” says Chandra Kumari, gesturing to a pile behind her. “I can’t get at them – they’re buried.”

Of the 793 houses in this village, 515 have been destroyed. And virtually no house is undamaged. People are finding what shelter they can amid the ruins and under tarpaulins. Many are elderly and frightened.

“When the earthquake came… it was shaking us all around,” Kamala Neupane tells us, tears falling from her eyes as she sits in front of her shattered home. “Everybody was screaming.” Kamala is 54 years old and lives alone.

At the other end of the village, Tulasa Aryal takes a dented cooking pot from the makeshift tent that is now her home, and begins to prepare some rice. For now, food is not the priority problem. “How can we stay in that?” she says, pointing to the tent. “The monsoons are coming. We need shelter and we need clothes – then we will need food.” 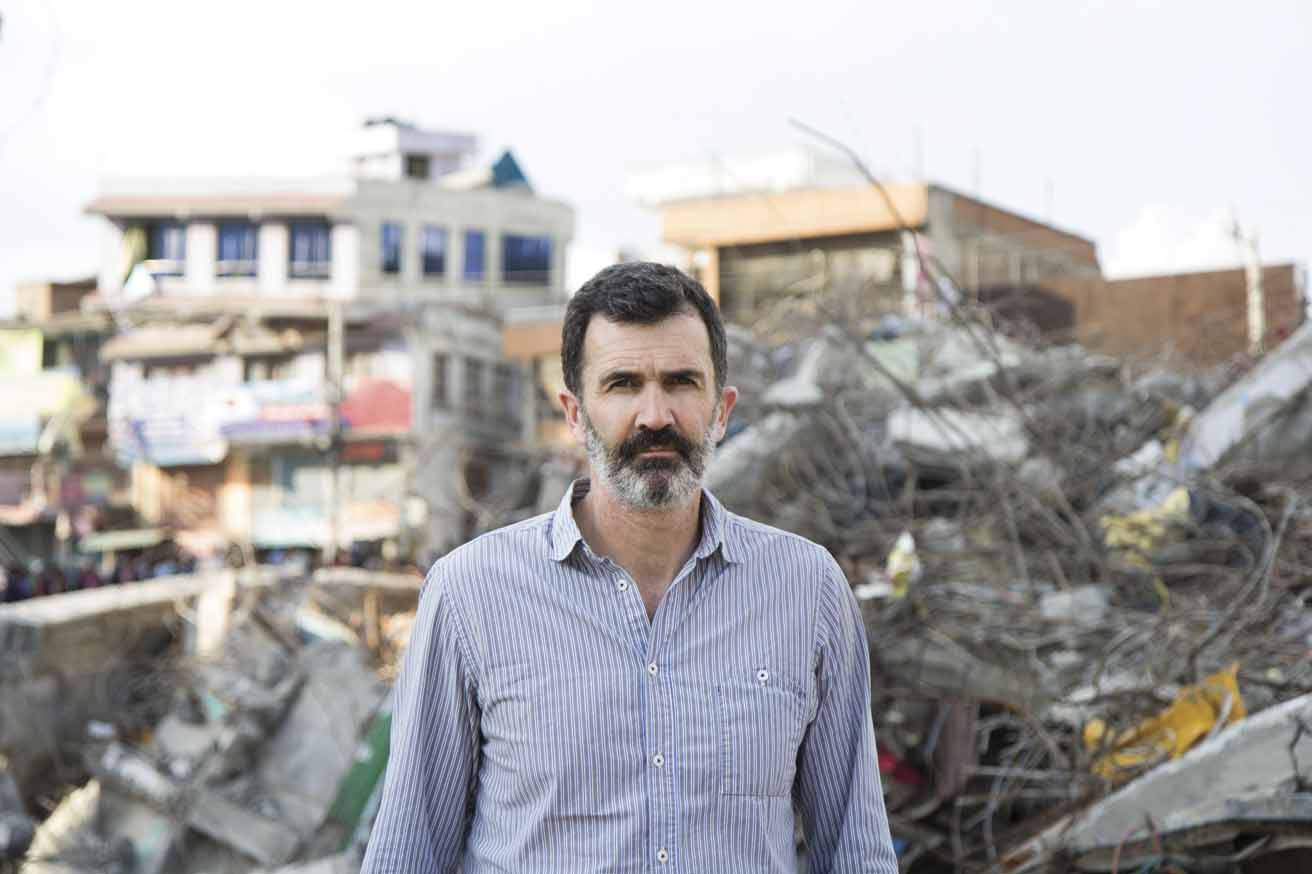 Kieran McConville standing in front of a collapsed building in Kathmandu. Kieran works in the Communications Unit of Concern Worldwide and travels extensively to document the organization’s emergency response and development work around the world. He is originally from Limerick, Ireland and lives in New York City.

This scene is replicated in hundreds of villages across rural Nepal, and in many cases the situation is much worse, with landslides blocking access to already remote communities. Concern worked here for five years up to 2010, and it is the local partnerships formed during that time that are now key to getting help for the people who need it most.

In some of the hardest hit districts emergency team members have embedded with local organizations and are working with them to figure ways of overcoming the obstacles this awe-inspiring terrain presents. Tarpaulins, blankets, hygiene kits, and water purification tablets are among the supplies that will be delivered in the initial response, reaching around 14,000 families.

Beyond all of that there will be other needs, and already plans are under way to see how the team can best put the generosity of Concern’s supporters to longer-term use for the people of Nepal’s mountain villages. Throughout this organization’s 47 years, it has formed a reputation for not just responding to emergencies, but for staying on to help communities rebuild, recover, and develop. It’s never straightforward, and in this case it’s logistically very challenging, but it’s also a humanitarian imperative. ♦

UPDATE: A second earthquake hit eastern Nepal midday Tuesday, May 12, two weeks after a major 7.8 magnitude quake killed more than 8,000 people in the country. Kieran McConville, who wrote this article, was there with Concern and shared this video:

EDITOR: This article originally appeared in the June / July 2015 issue of Irish America.

One Response to “A Challenging Response:
Concern in Nepal”

Born and bred in Dublin, Ireland, Paul Gallen is the general manager of Pier Sixty LLC at Chelsea Piers, a collection...

With a bill soon to be introduced by the Dáil, Ireland is set to be the first country in the European Union to ban the...

Ireland’s Role in Global Climate Change. ℘℘℘ Welcome to the Emerald Isle. A country so verdant that Johnny Cash...