On the anniversary of W.B. Yeats’s birth (June 13, 1865), we look at some of the places in Sligo that inspired his best-loved poems. 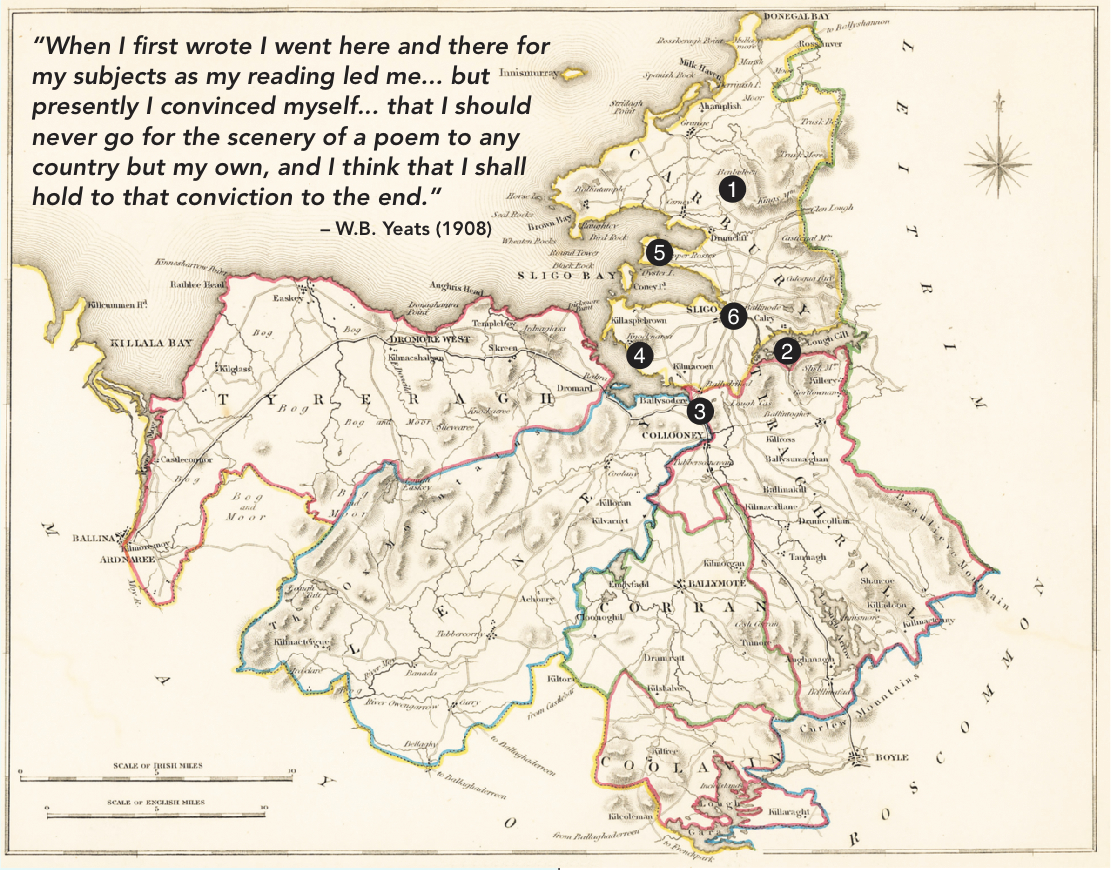 1. BENBULBEN and DRUMCLIFFE CHURCHYARD: At his request, Yeats’s body was laid to rest in France and later removed to the churchyard in Drumcliffe, under Ben Bulben mountain, where his great-grand- father had served as rector. St. Columba founded a monastery here in the sixth century. Today, a magnificent 11th century high cross and remnants of a round tower still stand. The epitaph on Yeats’s gravestone derives from the last lines of “Under Ben Bulben.”

2. LOUGH GILL and INNISFREE: Named for the Irish goddess Gile, this beautiful freshwater lake and the rocky highland of Sleuth Wood that dips into it are the backdrop for Yeats’s poem “The Stolen Child.” As a teenager, Yeats had wished to imitate Thoreau by living on Innisfree. Later, while living in London, he longed for the seclusion of a pastoral setting, and he credited the sound of water from a fountain in a shop window as the inspiration for “The Lake Isle of Innisfree,” whose subject represented for him a life of simplicity surrounded by beauty. 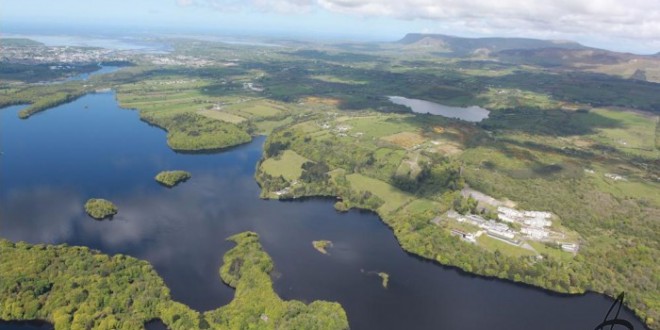 3. KNOCKNAREA: Dominating the landscape of Sligo town is this monolithic limestone hill. Scholars believe the unexcavated cairn conceals a Neolithic passage grave dating to 3000 B.C.E. In Irish lore, it is the grave of Queen Maeve. Yeats’s poem “Red Hanrahan’s Song of Ireland” describes the impact of the changeable weather on this landscape: “The wind has bundled up the clouds high over Knocknarea, / And thrown the thunder on the stones for all that Maeve can say.” 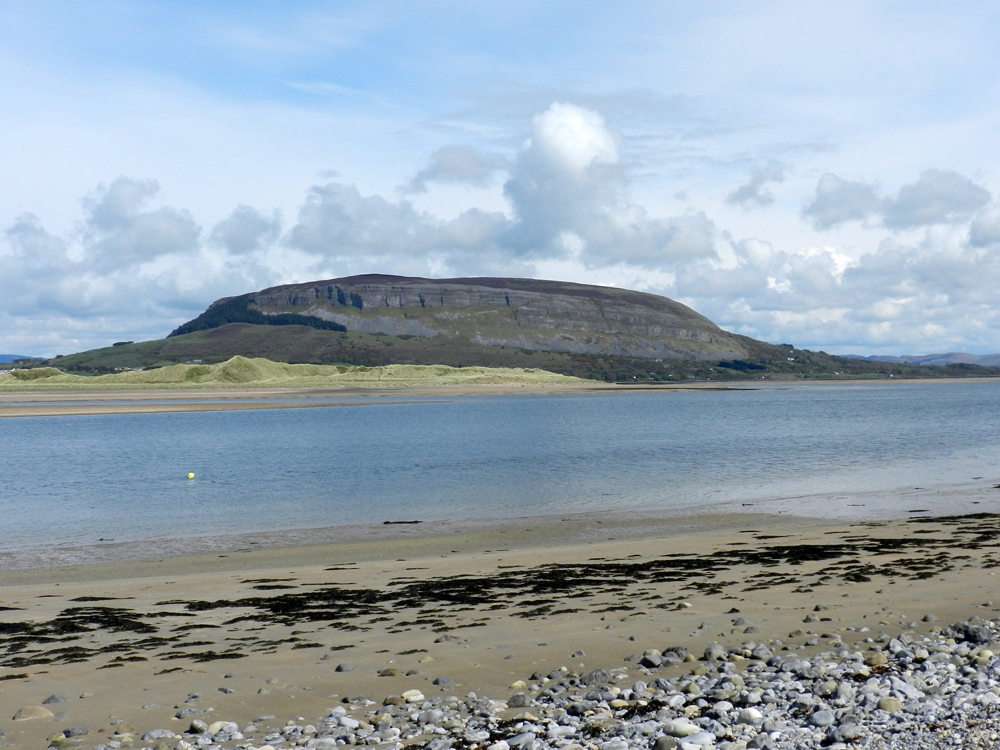 4. BALLYSADARE: Yeats often stayed at Avena House, his cousins’ home in Ballysadare. While there, he heard an old peasant woman singing a song; he would later reconstruct the song from three lines “imperfectly remembered.” The result was the well-loved poem of unrequited love “Down by the Salley Gardens.” “Weeping salley” was another name for weeping willows, which grew in thickets, or “salley gardens” – a favorite meeting point for lovers. In 1909 the poem was set famously to the Irish love song “The Moorlough Shore” by composer Herbert Hughes.

Built in the 1840s the house is set on slightly elevated site in mature grounds behind high stone boundary wall with tennis court, formal garden and gravel paths. (Sligo Today)

5. ROSSES POINT: Yeats and his brother Jack spent many happy summer holidays with their cousins, the Middletons, in this village, whose name also refers to the surrounding peninsula. Now in ruins, their home, Elsinor Lodge, was built by the smuggler Black Jack, whose ghost, the family claimed, would tap on the window panes at night. Yeats’s grandfather Pollexfen owned a shipping company there, and the seas, fishermen, and water lore were part of every visit. Yeats claimed that his poem “The Meditation of the Old Fisherman” was based on a conversation he had with a Sligo fisherman. 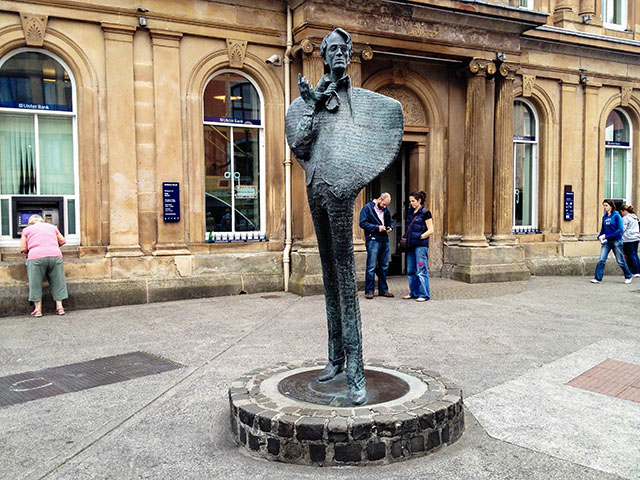 6. SLIGO TOWN: In Sligo Town is the great black and white ancestral mansion overlooking the quays to which Yeats’s family moved soon after his birth. On the Douglas Hyde Bridge, the Yeats Society’s headquarters house the Yeats International Summer School, the Hyde Bridge Gallery (including a photographic exhibition on the Yeats family and Sligo), and Lily’s and Lolly’s Cafe. Just over the bridge, outside the Ulster Bank on Stephen Street, is artist Rowan Gillespie’s bronze statue of Yeats, engraved with excerpts of his most famous works.

Swear by what the Sages spoke
Round the Mareotic Lake
That the Witch of Atlas knew,
Spoke and set the cocks a-crow.

Swear by those horsemen, by those women,
Complexion and form prove superhuman,
That pale, long visaged company
That airs an immortality
Completeness of their passions won;
Now they ride the wintry dawn
Where Ben Bulben sets the scene.

Here’s the gist of what they mean.

Many times man lives and dies
Between his two eternities,
That of race and that of soul,
And ancient Ireland knew it all.
Whether man dies in his bed
Or the rifle knocks him dead,
A brief parting from those dear
Is the worst man has to fear.
Though grave-diggers’ toil is long,
Sharp their spades, their muscle strong,
They but thrust their buried men
Back in the human mind again.

You that Mitchel’s prayer have heard
`Send war in our time, O Lord!’
Know that when all words are said
And a man is fighting mad,
Something drops from eyes long blind
He completes his partial mind,
For an instant stands at ease,
Laughs aloud, his heart at peace,
Even the wisest man grows tense
With some sort of violence
Before he can accomplish fate
Know his work or choose his mate.

Poet and sculptor do the work
Nor let the modish painter shirk
What his great forefathers did,
Bring the soul of man to God,
Make him fill the cradles right.

Michael Angelo left a proof
On the Sistine Chapel roof,
Where but half-awakened Adam
Can disturb globe-trotting Madam
Till her bowels are in heat,
Proof that there’s a purpose set
Before the secret working mind:
Profane perfection of mankind.

Quattrocento put in paint,
On backgrounds for a God or Saint,
Gardens where a soul’s at ease;
Where everything that meets the eye
Flowers and grass and cloudless sky
Resemble forms that are, or seem
When sleepers wake and yet still dream,
And when it’s vanished still declare,
With only bed and bedstead there,
That Heavens had opened.
Gyres run on;
When that greater dream had gone
Calvert and Wilson, Blake and Claude
Prepared a rest for the people of God,
Palmer’s phrase, but after that
Confusion fell upon our thought.

Irish poets learn your trade
Sing whatever is well made,
Scorn the sort now growing up
All out of shape from toe to top,
Their unremembering hearts and heads
Base-born products of base beds.
Sing the peasantry, and then
Hard-riding country gentlemen,
The holiness of monks, and after
Porter-drinkers’ randy laughter;
Sing the lords and ladies gay
That were beaten into the clay
Through seven heroic centuries;
Cast your mind on other days
That we in coming days may be
Still the indomitable Irishry.

Under bare Ben Bulben’s head
In Drumcliff churchyard Yeats is laid,
An ancestor was rector there
Long years ago; a church stands near,
By the road an ancient Cross.
No marble, no conventional phrase,
On limestone quarried near the spot
By his command these words are cut:

Cast a cold eye
On life, on death.
Horseman, pass by!♦