Thompson in Rome to cover the abdication of Pope Benedict and the election of Pope Francis in February 2013 for the “Today Show.” (Photo: Clare Duffy / Twitter)

As a television correspondent, Anne Thompson has covered events as far ranging as Tonya Harding in Portland, Oregon to Ground Zero on 9/11. It’s a job some might find enviable, even glamorous for its range, travel, and publicity.

“I was in Rome for 38 straight days covering the resignation of Pope Benedict and election of Pope Francis,” she said in an interview with Bill Carter, a fellow Notre Dame alumnus and current reporter for The New York Times.

But, she added that she lived on a houseboat in Venice, Louisiana for five months while covering the BP oil spill in 2010. It was for this work that she became the correspondent with the most airtime on television, according to the Tyndall Report that year.

In addition to geographical difficulties, there’s also the sometimes-hostile politics of reporting environmental news, as she has done since 2007. “[We] know the climate is changing,” she told Carter. “I think some people are afraid of change, especially economic change that would affect their livelihoods. I’ve covered politics and religion and never gotten this kind of nasty response.”

Still, reporting the news is her livlihood. In March 2007, one year after she was diagnosed with cancer, she wrote on NBC’s The Daily Nightly blog that work was part of her cure, “It gave me purpose. It made me feel normal. 30 Rock became my cancer-free zone.”

Though a little embarrassed by it, her family didn’t speak much about its Irish heritage. “I once asked my father about our ancestors. He laughed saying we came from ‘a long line of bricklayers and bootleggers,’” she says. Regardless, Thompson is a member of the Board of Trustees for Notre Dame (she was among the first graduating classes that allowed women to attend the university) and received the Leadership in Education Award for her hard-hitting, global environmental reporting from the Kelly Cares Foundation in 2014.

Thompson is the type of person who will jokingly refer to her Catholic education as “a great wine,” by which she means that it will “only get better with age,” as she said in a 2011 interview ahead of Notre Dame’s Pink Zone basketball game for breast cancer awareness.

“There is one thing that you are guaranteed to cover in journalism coming from Notre Dame – the Vatican. I am the token Catholic journalist,” she told Rebecca Rogalski of Her Campus, an online newspaper for and by college women, this past December. But it’s also covering the Vatican and Pope Francis that has given Thompson her greatest professional memories. Here, she talks about those, covering the BP oil spill, surviving breast cancer, Nelson Mandela, and more. 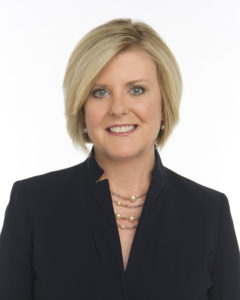 I am focused on spring. It was a brutal winter: too cold, too snowy, too many things to put on to go outside. I want tulips and daffodils and lots of sunshine. I can’t wait to fill my outdoor planters with annuals and herbs. This year, I am filling one planter full of milkweed to give the monarch butterflies a place to land on their journey north.

If I don’t have a live shot for the “Today Show,” I get up about 6:30 a.m. I read hard copies of The New York Times and The Wall Street Journal. I cruise Twitter, the online versions of The Washington Post and USA Today while listening to all news radio and the “Today Show.” It is a cacophony of news. We have conference calls at 9 and 9:30 and then I go in. I spend my day either working on a story for “NBC Nightly News” or “Today.” If I don’t have a story, I am researching stories.

My perfect day is any day I can spend by the ocean. The sound of the surf is the most soothing sound I know. It calms me right down. Add my family, dear friends, great conversation, food and wine and that is heaven on earth for me.

I’m still trying to find a talent that’s not hidden! I love to bake. And I love watching people enjoy the cookies or cobblers or cakes I create. I spent five months in Venice, Louisiana covering the BP oil spill in 2010. With only two restaurants to choose from, our team decided we would cook for each other. The core group was five guys and me. We worked like dogs to cover the story, always in a boat or a chopper. At the end of the day, as I wrote my “Today” spot, the guys would cook the meal. I would bring dessert. They still joke that all my recipes begin with “take a pound of butter.”

Usually, on a long, demanding assignment like that you lose weight. Instead, we all gained weight!

On long plane rides, do you strike up conversations?

Almost never. I always say “hello” but I relish plane rides for the fact there is no phone. I can catch up on my reading (almost always for work) and sleep. It’s also a great opportunity to see movies. I can’t tell you the last time I saw a movie in a theater.

Who is your hero?

Nelson Mandela. He is also the person who I really wish I had had the opportunity to interview. I will be forever fascinated by his ability to forgive when he came out of Robben Island. By choosing forgiveness instead of vengeance, he moved his country forward. I wish we were more forgiving as a society. There is no justice without forgiveness.

It is not easy to do, but people who forgive are happier, free of the yoke of anger. I would love to do a documentary on forgiveness.

My proudest moment is surviving stage 3 breast cancer. I never expected to get it. I have no family history. When I was diagnosed, I wasn’t sure I would get through it. Like everything else in my life, I succeeded because I was supported by a tremendous team: my doctors, my friends, a very understanding company, and my remarkable family.

I just finished Nora Webster by Colm Tóibín and All the Light We Cannot See by Anthony Doerr. Next up, The Art of War by Sun Tzu and The Sense of an Ending by Julian Barnes.

Who is your favorite author?

“Report what you know,” from Tom Brokaw.

“Never hold a grudge. It is letting someone rent space in your mind for free,” from the late Rev. Theodore Hesburgh, president emeritus of the University of Notre Dame.

And “Always leave the door open to a second conversation,” from Fr. John Jenkins, the current president of the University of Notre Dame.

Your favorite quality in friends?

The most deplorable quality?

What is a movie you will watch again and again?

The Sound of Music.

What is your favorite sound?

The voices of my nephews and niece.

Favorite country you have visited?

It’s impossible to choose. I love France, Italy and Australia.

Do you have a favorite place in

The Cliffs of Moher.

What do you consider to be your greatest extravagance?

The rosaries I received after a private audience with Pope Francis and twice flying on his papal plane. I also treasure the Notre Dame medal Fr. Jenkins gave me when I joined the Board of Trustees.

What would you be doing if you weren’t an NBC correspondent?

I would love to be an architect. I love design and I am fascinated with the way design impacts how we work and live.

Anything you would do over?

No. I look forward, not back. I can’t change the past. I can affect the future.

What are you working on now?

There are two big stories I hope to cover this year. The first is Pope Francis’s visit to the United States in September. The other is the U.N. climate change talks that will take place in Paris at the end of the year. ♦