Glanbeigh, the fictional Everytown of Mayo native Colin Barrett’s Young Skins, is “nowhere you have been, but you know its ilk,” asserts the narrator of the collection’s opening short story. Barrett borrows from the techniques of William Faulkner and Gabriel García Márquez, immediately setting his debut book in the tradition of literary giants – the small-town story tropes of stagnation, loneliness, and longing abound. But in Barrett’s hands, they don’t feel tired or overdone. The specter of violence hangs over the tales; sometimes it is the threat of violence to come, and sometimes the ghost of violence past, as in “Stand Your Skin,” where a random act of rage perpetrated against Eamon “Bat” Battigan several years before the story’s action continues to haunt his life. Despite the pervasive violence and anger, many of Barrett’s stories end with a hopeful or redemptive turn, giving the collection a feeling of freshness.

In a recent interview with the Paris Review, Barrett said, “Give the characters the good lines, give them the best.” Young Skins, Barrett’s debut, masters dialogue, the damning and the humorous. In “The Moon,” a young woman accuses a local bouncer of liking the town almost too much. She follows the accusation by dividing Glanbeigh into two sets: those who leave and those who stay, claiming that to those who stay, a city like Galway (barely two hours from most of Mayo) “might as well be the moon.”

Though some of the characters who leave do come back, it is often not by choice, like the unnamed alcoholic narrator of “Diamonds” who returns to Glanbeigh only as an alternative to suicide. He attempts to find a different sort of oblivion in the routine he establishes there, but finds he can’t escape the ghost of the outside world when he goes home with a fellow AA member – the framed photo next to her bed isn’t of her family, but the Siberian mine where her son’s father works.

Barrett’s prose is clean, lyrical, funny, and heartbreaking as he tackles material that could easily be depressing or hackneyed. His skill has not gone uncelebrated; in 2014 Young Skins received the Frank O’Connor International Short Story Award, the Guardian First Book Award, and the Rooney Prize for Irish Literature. The accolades are well deserved.

Máirtín Ó Cadhain’s Cré na Cille is one of the, if not the, most important books written in the Irish language in the 20th century. Published serially in 1949, Cré na Cille, traditionally rendered as “churchyard clay,” now receives its long overdue first complete translation into English in Alan Titley’s (much more sonorous, if not necessarily steadfast, rendering) The Dirty Dust.

Anyone who has participated in the cacophony of personal and professional grievances aired at the corporate holiday party gone late into a work night will find a kinship in the book. Talk is cheap, the business cliché goes, but in The Dirty Dust, it is, quite literally, all there is. The book is set in a graveyard (the “churchyard clay”) and the characters are dead. The time, as the table of contents informs, is “For Ever.” And the narrative, such as it is, is written exclusively in dialogue – sometimes as coherent conversations (though “conversation” is a generous term for the captiousness found in Ó Cadhain’s graveyard), and sometimes as overheard bits of carping. Here, tombstone material, French lessons, inheritances, debt, Hitler, writer’s block, crop yields, and times tables are all of equal import for complaint.

In Titley’s hands, Ó Cadhain’s stamina, verve, and crudities are preserved. Titley’s translation isn’t always the most “accurate,” but for the English introduction to a groundbreaking Irish language novel, he maintains Ó Cadhain’s treatment of modernism while brandishing a 21st century brashness, achieving something of the effect Ó Cadhain would have had on his original Irish language readers. And, unlike the holiday party, the one thing the dialogue never does is stagnate.

Ellie O’Neill’s debut novel, Reluctantly Charmed, is a modern-day fairy tale filled with love spells and embarrassing parents, inept bosses and David Hasselhoff. Our heroine, Kate McDaid, is scraping by as an advertising copywriter with a bad crush on an undeserving lead guitarist when she learns that she is – or could be – the recipient of a mysterious inheritance. As the first female in the bloodline for many generations, Kate is bequeathed on her twenty-sixth birthday an unknown estate from her great-great-great-grandfather’s sister, who shared her name. To claim her birthright, Kate has one simple task: to publish seven poems, or “steps,” delivered straight from her ancestor’s communication with the fairies. Skeptical, but game, Kate dives headfirst into a world of blogs and St. John’s Wort, magic and danger. Along the way she makes some very powerful enemies, and is faced with a choice that could have devastating consequences. The streets of Dublin and the town of Knocknamee make a gorgeous backdrop for Kate’s adventures.

O’Neill’s writing is sharp, funny, and authentic, and she brings us a believable – and truly likable – protagonist in the most unlikely of circumstances. Reluctantly Charmed is a first effort that will bring O’Neill plenty of fans, while reminding her readers to keep an eye out for magic in surprising places.

When Lions Roar: The Churchills and the Kennedys 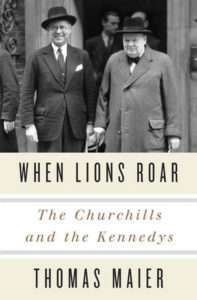 When Lions Roar: The Churchills and the Kennedys, by Thomas Maier. (Crown)

The two dynastic pillars of the 20th century were arguably the Kennedy and Churchill families, and now in Thomas Maier’s When Lions Roar: The Churchills and the Kennedys, their lives and deaths are engrossingly brought together. Maier has a keen eye for detail and offers up salacious anecdotes about the background dramas that colored their lives, the tragedies that beset them, and the curious ways the families’ lives intersected.

The story of the Churchill and Kennedy families is grounded in the patriarchs, Winston and Joe. Maier’s story is at once about the incredible bonds between fathers and sons and the double-edged sword of fame. The best parts of the book are those that center on the families in the 1930s. As Joe ascended politically, Churchill was relegated to his “wilderness years.” Maier does not hold back on the braided love lives

of both the men and women of the two families. Many times it seems the strongest ties that bound Kennedy and Churchill were through paramours like Clare Boothe Luce, the wife of the founder of Time magazine, who had affairs with both Joe Kennedy and Randolph Churchill.

The major drama however, centered on Joe Kennedy’s time as ambassador to England, when his vitriolic statements of Nazi appeasement angered FDR, the British public, and especially Churchill. During his tenure, Kennedy was embroiled in a Nazi spy crisis and was shunned by Churchill’s government, which left him floundering in his own wilderness.

The book does lose its way towards the end. Maier faithfully captures the tragedy of both families – the deaths of Joe Jr. and Kick Kennedy, the divorce of Randolph and Pamela Churchill, the suicide of Churchill’s daughter Diana – but the rest of the family members appear as extras, not a supporting cast. The ties that unite the two families by the 1950s are tenuous. JFK is dutifully brought to life, including his fascination with Ireland (he interviewed Éamon de Valera and visited with his sister in 1947) and his admiration for the works of Churchill. Maier seems at strides to connect Churchill and JFK, mentioning many times how “alike” Kennedy and Chur-chill’s prose sound, but offering no critical insight. Still, in the end we are left with a thoroughly told and fascinatingly detailed account of the Churchill and Kennedy families that brims with revelation and showcases the dynamic relationship between these roaring dynasties. 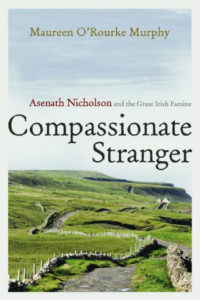 Ireland’s Great Hunger still haunts the historical memory of many Irish and Irish-Americans, but the name Asenath Nicholson (though not entirely forgotten by historians) should be remembered by all who contemplate the Great Famine, as Maureen O’Rourke Murphy’s new book, Compassionate Stranger: Asenath Nicholson and the Great Irish Famine, makes clear.

Nicholson is sometimes remembered for her role in detailing the conditions of the rural Irish poor before the famine. But when the combined effects of dependency on a single crop, the arrival of the potato blight, and the detached and intransigent policies of laissez-faire London brought on the most desperate years in Ireland, Nicholson was also there to record it all as she redoubled her calls for financial assistance while tirelessly administering whatever aid she could.

Compassionate Stranger is the culmination of fifty years of punctilious research written as an accessible biographical-narrative, which recalls Nicholson’s fascinating life and her role in both American and Irish history. Utilizing Nicholson’s writings and archival material from the United States, Ireland, and Britain, Murphy was able to overcome the challenges of writing a comprehensive life of a lesser-known woman of the 19th century.

Murphy’s research also reveals Nicholson as an outspoken American woman politically and socially committed. She was a vehemently anti-Masonic temperance reformer and an active journalist who later ran a boarding house populated by her colleagues in the abolitionist movement. Some of the most rewarding aspects of Compassionate Stranger come with Murphy’s astute analysis of how Nicholson’s early involvement in U.S. politics and her quest for reform later influenced her activity in Ireland.

Compassionate Stranger is not only a notable academic achievement but is also a readable and tantalizing story of one powerful woman’s drive to bring justice to the marginalized. The book itself does this job as well, as it does justice, at least in the case of one woman, to the role of women all too often left on the margins of historiography.

One Response to “Review of Books”

MILKMAN Anna Burns I didn’t know much about Northern Ireland before I left home in 1972.  There was one shopping...