A variety of historical garden styles occupy the cemetery.

One Million Dubliners, directed by Aoife Kelleher, shines a light on the past and present of Glasnevin Cemetery and offers remarkable insights into the lives of the people of Dublin and Ireland, today and in times gone by.

The film was shown on RTÉ before Christmas and as soon as I saw it, I immediately wanted to learn more. I made my way to Dublin where I took a guided tour of the cemetery and met Aoife to discuss how and why she made the film.

Having started as a nine-acre site in the 1830s, Glasnevin now covers 124 acres and includes a museum, genealogy office, and café. I enter the museum on a cold winter’s day and as I wait for the tour to start, I eavesdrop on an old American man who is asking the genealogist for help locating an Eileen Kennedy from Terenure. She is his only link to Ireland and he wants to visit her grave – the one place he can make tangible his connection to the country.

I never discover if he finds her as Glasnevin’s current historian Conor Dodd shows up to start the tour before I can hear more. Conor starts as he means to go on: full of banter and brimming over with information.

He immediately points out his favourite piece in the exhibition about Irish involvement in WWI – the uniform of a soldier called William Gibson. A bullet has torn through its breast pocket and through the lid of a metal cigarette case he used to carry inside it. However, the base of the cigarette case is merely dented, having stopped the bullet from ent-ering his body and penetrating his heart.

“Surely this is the only time smoking cigarettes saved someone’s life,” jokes Conor.

Every tour of Glasnevin is different, depending on the personality of the tour guide. Tours can be tailored for different groups. If you’re interested in the history of 1916, Irish literary figures, or prominent women in Irish history, a tour can be custom designed for you. 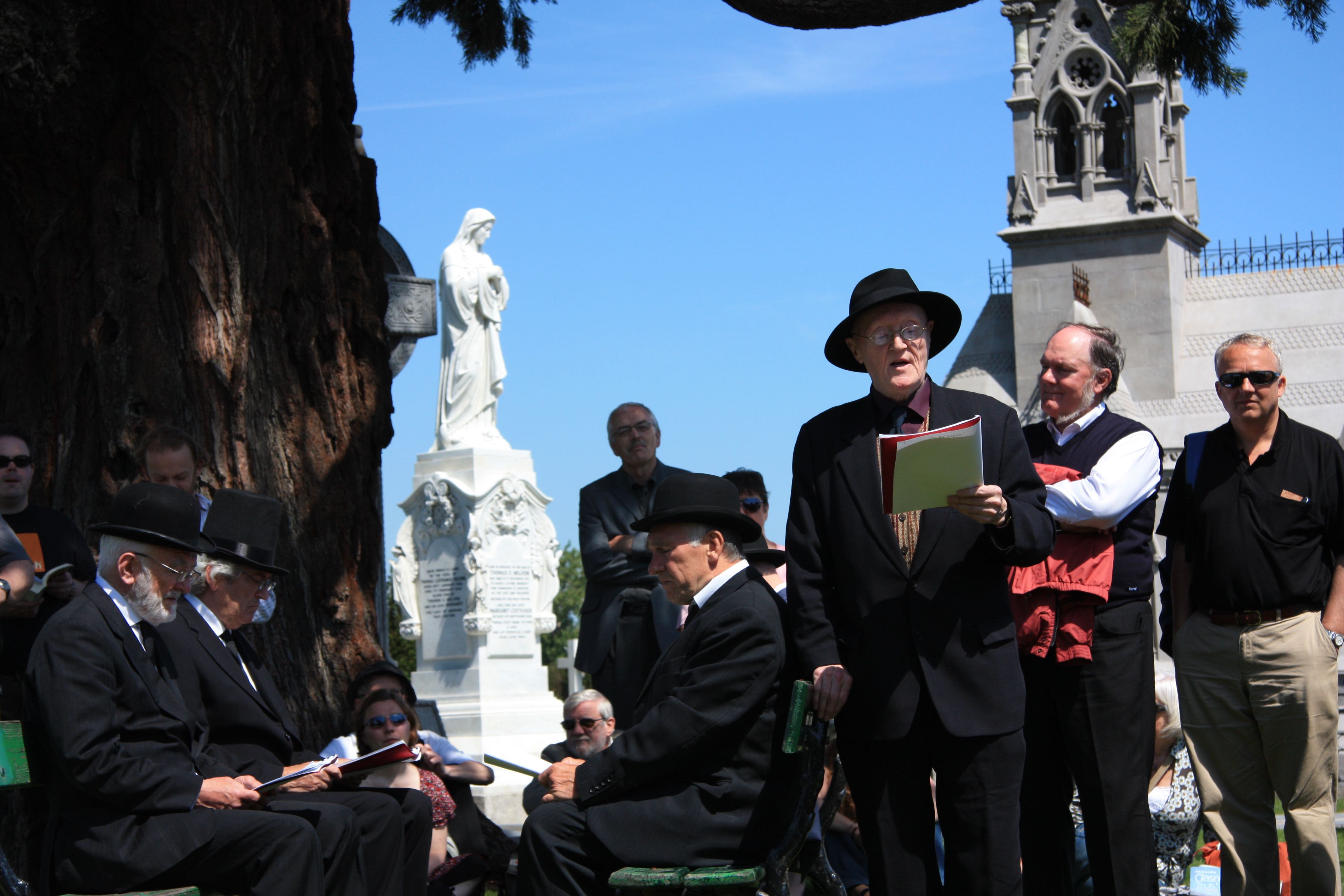 Reading Ulysses at Glasnevin on the James Joyce Bloomsday tour.

Mine was a general tour and began at the grave of the Forgotten Ten – ten rebels, the most famous of whom was Kevin Barry, who were executed in Mountjoy Prison during the War of Independence. They were buried in the prison until they were exhumed and re-interred in Glasnevin in 2001.

Theirs weren’t the only remains to have been exhumed. Roger Casement is buried beside them. He was executed for treason in England following his part in gun-running prior to the 1916 Rising, and his body was brought back from England in 1965 by Eamon de Valera, whose body is also buried here.

Our next stop brings us to the grave of the man who founded the cemetery. Daniel O’Connell was one of Ireland’s greatest statesmen and he opened the Victorian walled garden cemetery of Glasnevin in 1832. He wanted it to be a place where people of all denominations could bury their dead without restriction or fear.

Eleven-year-old Michael Carey was the first to be buried here, but it took some time for Glasnevin to become Dublin’s main cemetery. It was too far from the city for many people, and only paupers were buried here at first. Fifteen thousand people were buried in pits here during the cholera outbreaks of the 1830s and 1840s. And because the cemetery was nondenominational, babies who died before being baptised and people who died through suicide were buried here too.

Things changed once O’Connell himself was buried here. His coffin lies in a family vault under the O’Connell Tower, a round tower that rises 168 feet above the cemetery. We visit his crypt on our tour. His coffin is in a central chamber whose walls are decorated with Celtic murals. We’re told it’s good luck to touch his coffin, so we all make sure to do so before we leave.

We explore the side rooms too. One is piled high with lead-lined coffins containing members of O’Connell’s family, and another leads into the tower itself. 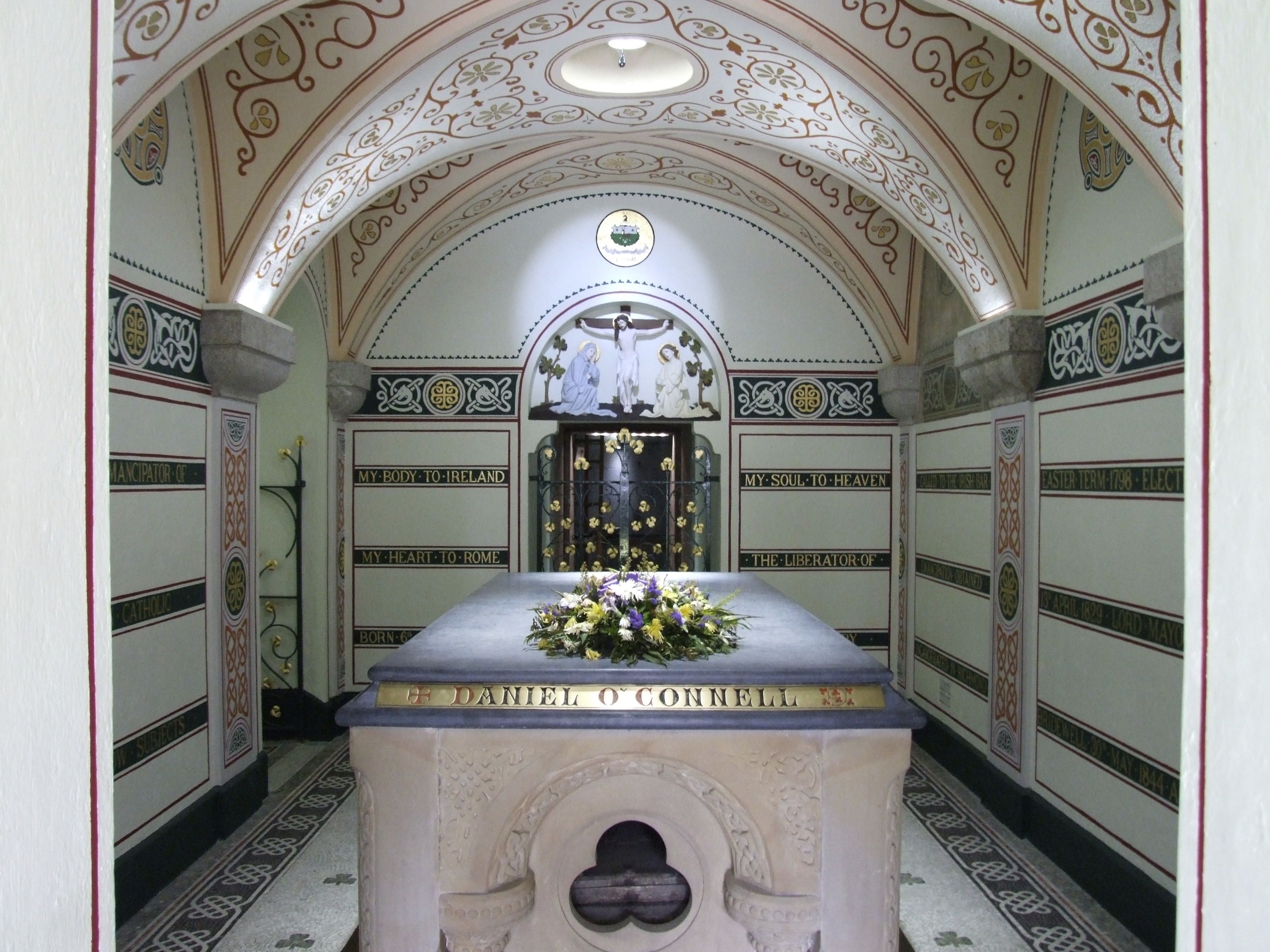 Next we visit the Commonwealth War Graves Commission. This cross was erected last July to commemorate the Irish who fought with the British Army in the First and Second World Wars.

“Irish history is not clear cut and nor is our relationship with Britain,” says Conor. “We have two Neilan brothers buried here. One fought in 1916 and was a hero. The other was a British soldier in WWI and he was looked down upon. They are buried together.”

The grave of Charles Stewart Parnell is right beside the cross for the soldiers. His funeral was another memorable day at Glasnevin.

“One hundred and twenty thousand people lined the streets that day, so many that his cortege didn’t reach the cemetery until nightfall,” says Conor. “Everyone wanted something green for their lapels when he was being buried and many took ivy from the cemetery walls. That’s how ivy came to be associated with Parnell.”

We can see watchtowers from the Parnell monument, which strikes us as odd. “It wasn’t odd in the 1800s,” explains Conor. “People paid good money for dead bodies in those days. There was a set price for adults, and children were priced by the inch. The watchtowers were manned to keep out grave robbers.”

He tells the tale of Dan Donnelly, a boxer with a famously long arm. His body was stolen and a surgeon paid handsomely for it. But he was caught by police before he could dissect it. Somehow, he persuaded them to let him keep the arm, which still exists as a travelling exhibit today. “Dan Donnelly and his long arm: it sounds like a tall tale but it’s true,” says Conor. 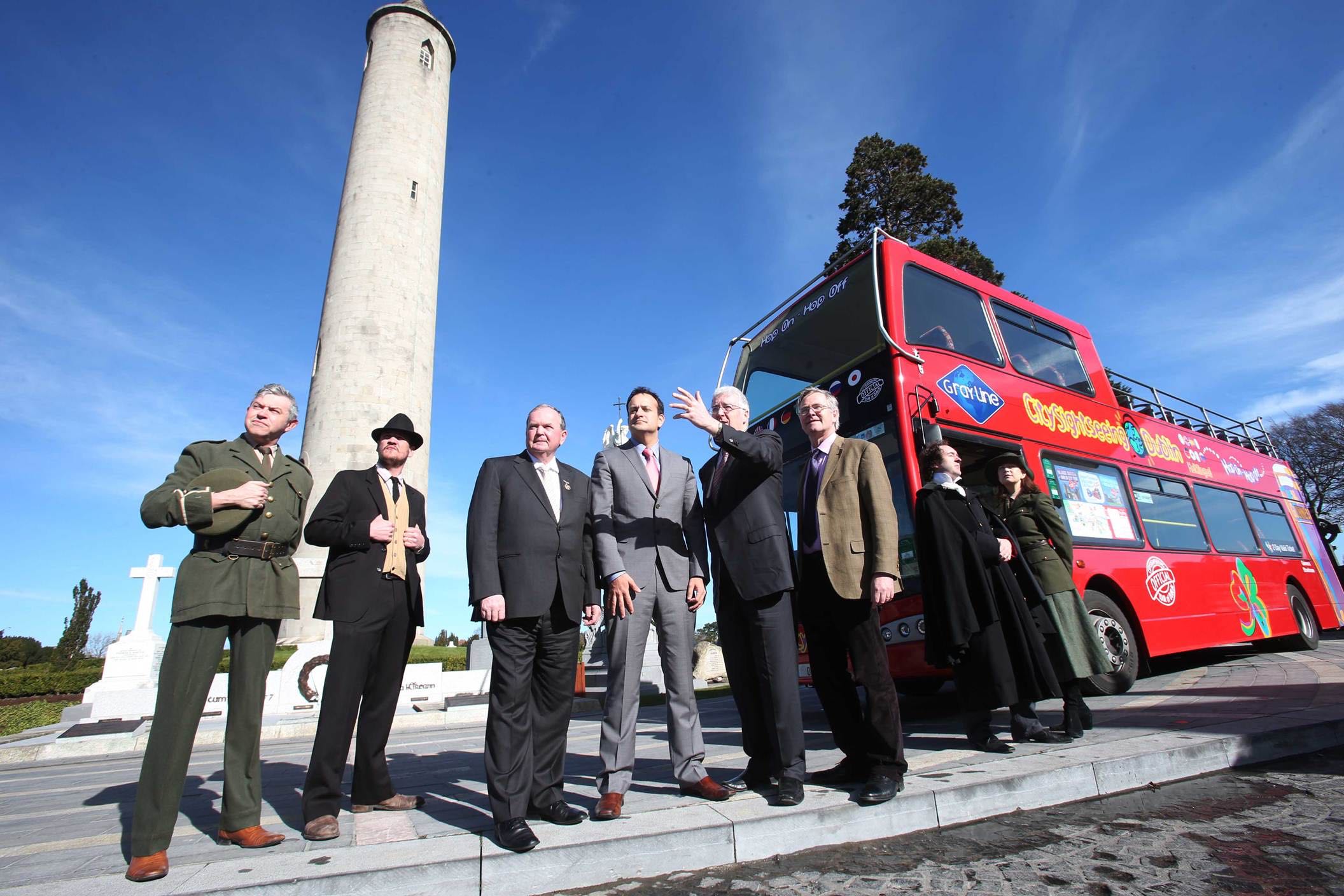 The launch of CitySightseeing’s Dublin Bus Tour at Glasnevin.

Our next stop is the Republican plot and the grave of O’Donovan Rossa, who was brought back from America and buried in 1915. It was by his graveside that Pádraig Pearse gave his infamous oration: “The fools, the fools, the fools: they have left us our Fenian dead. While Ireland holds these graves, Ireland unfree shall never be at peace.” These rousing words inspired a revolution the following year.

There are many more buried in the Republican plot. Jim Larkin is there and so is his arch nemesis William Martin Murphy. Maud Gonne is with her Nobel Prize-winning son Seán McBride. Harry Boland, Countess Markievicz, and Arthur Griffith are there too. So is the man who wrote the Irish national anthem, Peadar Ó Cearnaigh.

There’s also Eamon de Valera, whose grave is marked with a few faded flowers. “Most people ask if this is it when I bring them here,” laughs Conor. “It’s a very modest grave.”

It’s certainly in marked contrast to Michael Collins’s grave, which is overflowing with flowers. Conor says it’s the most popular in the cemetery. 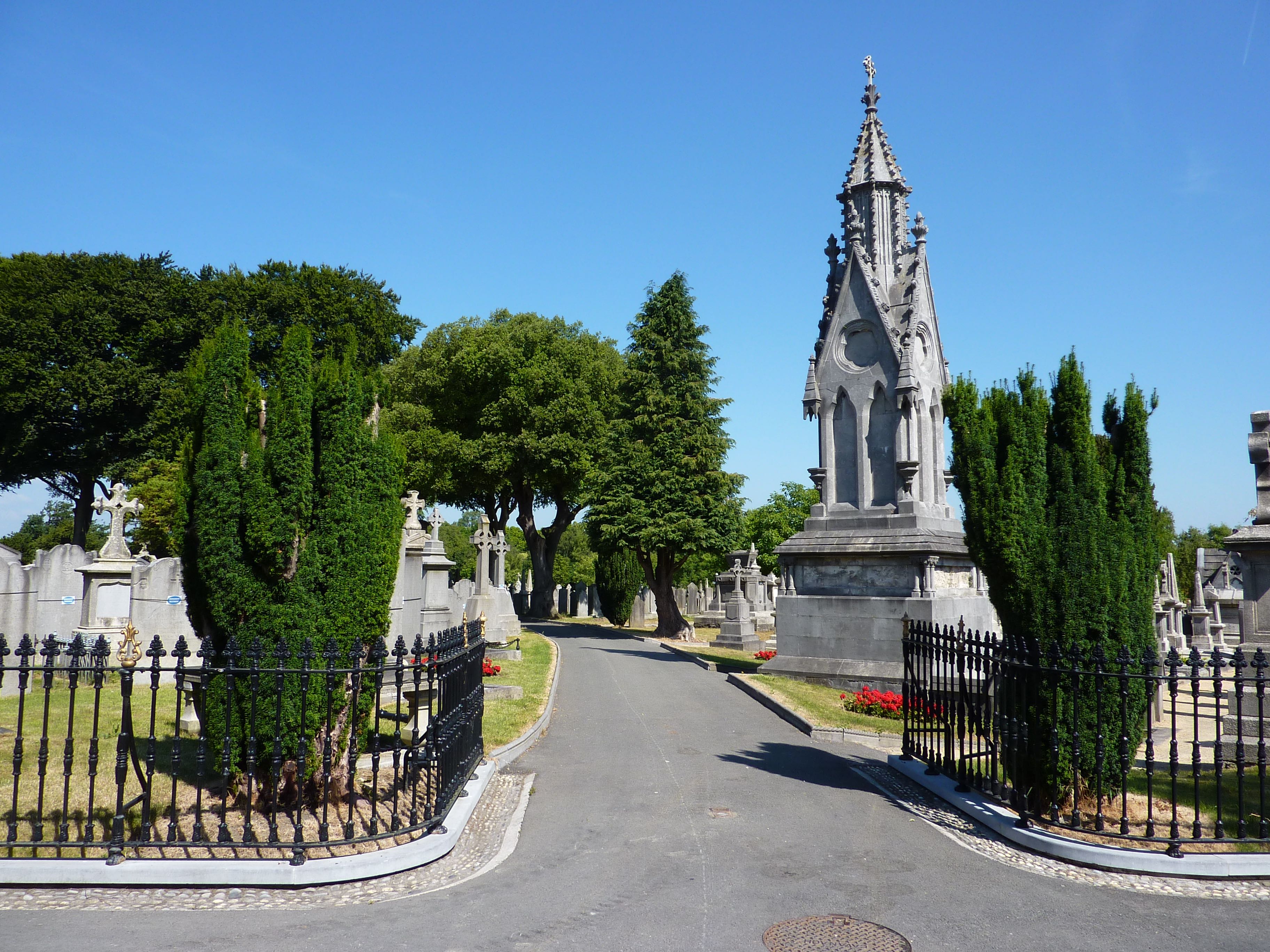 The entrance to Glasnevin after the cemetery underwent a re-landscaping and improvement project.

“Collins died young and lives on as a hero in many people’s minds,” he says. “The fact that Hollywood made a film about him definitely has a part to play in his popularity too.” 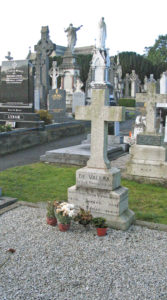 Taking this tour is a pure pleasure. It’s a journey through the political, social, and artistic history of Ireland through the stories of those who are buried here. And it’s not just famous people. There are the civilian dead of 1916. There are people whose only marker of their lives is their entry in the ledgers of Glasnevin. Every plot has its story: it’s just that some are better remembered than others.

If you are unable to pay a real-life visit to Glasnevin, the next best thing you can do is watch Aoife Kelleher’s documentary – One Million Dubliners. It’s an elegy of sorts, to the people who are buried here and to the history of Ireland that shaped them and continues to shape us to this day. It’s also a reflection on the cemetery as it is today, on those who work and visit here and what the lives and deaths of the people buried here mean to them.

“I’m a Northsider so I’ve been aware of Glasnevin all my life,” says Aoife. “It’s so iconic and there are so many stories to be told here. I was thrilled to get the opportunity to tell some of them.”

The very first thing Aoife did when researching this film was to take the same tour I took, but with another historian called Shane Mac Tomáis. She was so taken by what she calls Shane’s “blend of reverence and irreverence” that she made him the central character in her film. 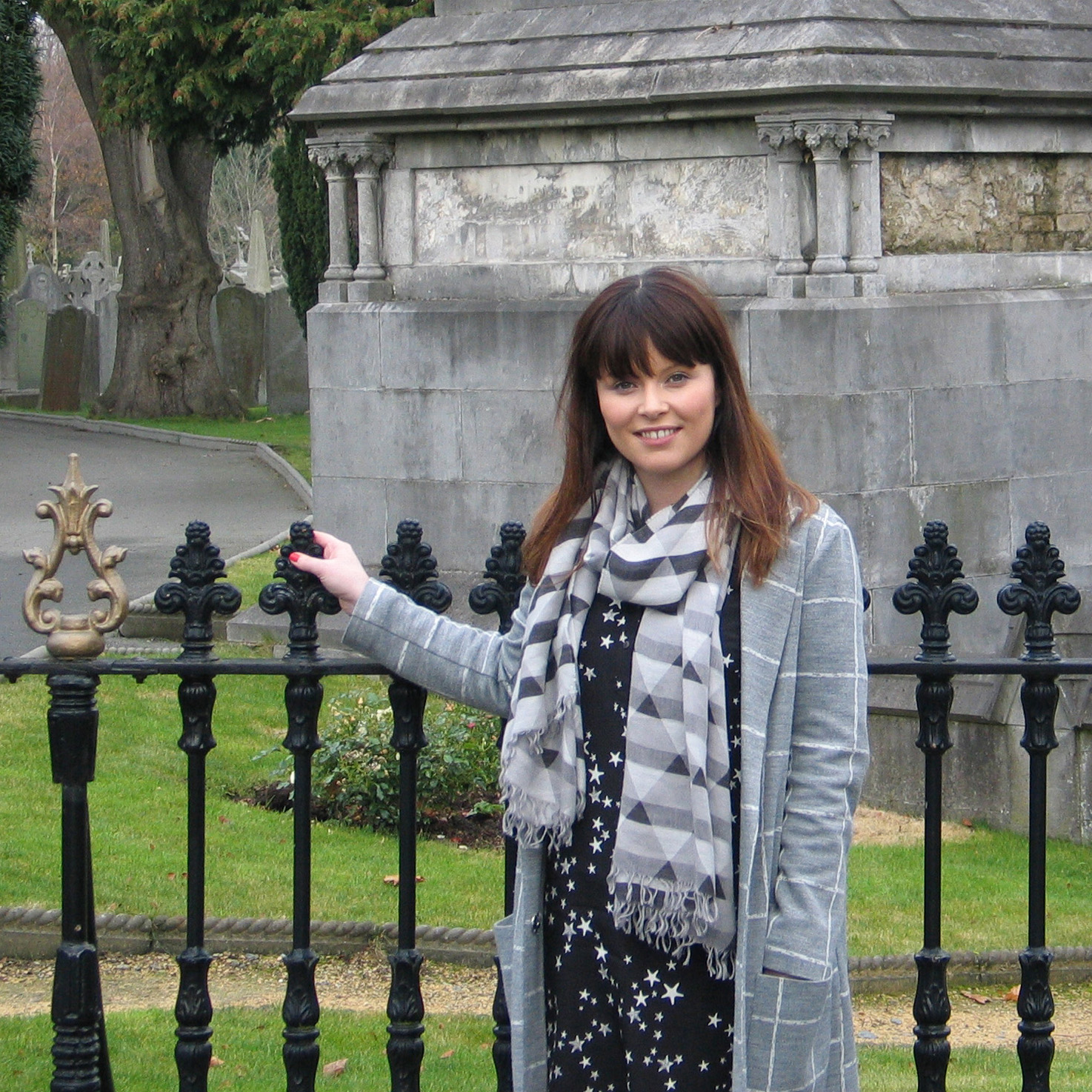 As a result, viewers see Glasnevin through Shane’s eyes. He tells us stories about the historical figures buried here and he guides us through the cemetery’s ledgers. Meticulous records have been kept since the cemetery opened, noting the name, address, age, and occupation of the person who died as well as who brought them to the cemetery and their cause of death. Shane lists some of these and gives us a taste of what life must have been like for people back then.

Shane isn’t the only character in the film. There’s a young man who regularly sings at Luke Kelly’s graveside. There’s a French woman who visits Michael Collins’s grave six or seven times a year. And there’s a woman who tells of her stillborn child being buried in the Angels’ Plot.

Aoife interviews staff members too. Grave diggers joke about their jobs. The man in charge of the crematorium talks about how attitudes to cremation have changed in Ireland. And inevitably, everyone she talks to ends up reflecting on the meaning of life and death.

“It was extraordinary to get a chance to hear what people really think about death,” says Aoife. “It was always surprising and revelatory, and it was often funny and heart-warming too.”

Making the film has left her with an abiding love for Glasnevin. “I have so many favorite places here,” she says. “I love Maud Gonne’s grave. I didn’t know she was here and I find her fascinating. Everyone who was educated in Ireland can’t help but be half in love with her because of Yeats’s poetry, and then there’s her life as a revolutionary, her disastrous marriage and her Nobel-Prize-winning son. I love the oldest part of the cemetery too, the part where Michael Carey is buried.” 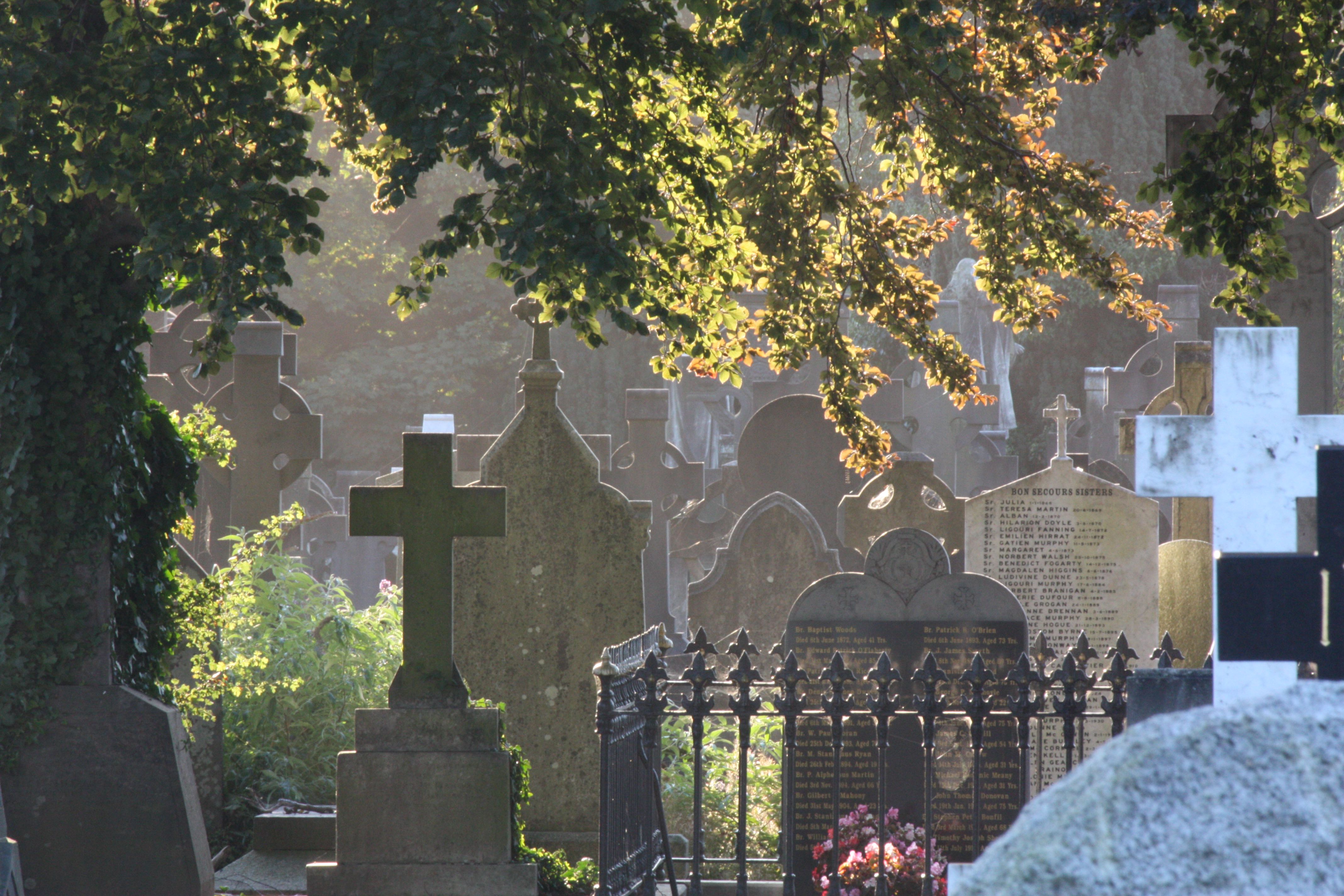 In fact, there were so many stories that struck Aoife while she was making the film that she could have made a whole series about Glasnevin. “Our film is just a tiny insight into what’s here,” she says. “I could make a new film every year because this cemetery has artists, historical figures, politicians, cultural figures. It has everything.”

Glasnevin is special. Spend a morning here and you’ll hear stories of Irish lives past and present, high born and low. You’ll emerge with a deeper and richer appreciation of Irish history.

One Million Dubliners brings this cemetery and its stories to many more people than those who are lucky enough to visit Dublin. “It was such an honour for me to hear the stories of Glasnevin and it’s even more of an honour to bring them to a wider audience,” says Aoife. “This is such an Irish story but I think it touches on universal themes.” ♦