Marshall Field’s, Chicago 1910, where Nora, the heroine of Irish Blood worked before fleeing to Paris.

The early 20th century finds Nora Kelly fleeing her native Chicago from a love affair gone wrong. Landing in Paris, she meets up with Irish revolutionaries – Peter, the librarian at the College des Irlandais who instructs her in ancient Irish history, and Fr. Kevin who introduces her to Maud Gonne. Meanwhile, through her job sketching designs for dressmaker Madame Simone, she also meets some of the great artists of the day including the writer Gertrude Stein.

That night I settle in with my books and Beaujolais and a decent enough fire in my cozy room overlooking the place des Vosges. No reason why a scholar can’t have a bit of comfort is there? Maybe I’ll bring a bottle of wine to share with Peter tomorrow. Now to the reading.

I start with Winifred Faraday’s translation of the Táin. Except the stories are hard to follow. Not as exciting as when Peter was striding around chanting and expostulating. Surprising the fire in the fellow.

Guided by Winifred, I follow Maeve and her army as they cross into Ulster going after a bull. And then, here come the men of Ulster. Except these armies don’t go at each other in pitched battle. Each selects a warrior to fight in single combat. Civilized. Though this one fellow, Cuchulainn, becomes possessed by a “battle rage” and demolishes every opponent.

I turn to the last pages to see how the tale ends. In the final combat Cuchulainn fights his foster brother, Ferdia. Winifred provides a note explaining that noble families in Ireland sent their children to be raised by other high-ranking families to create alliances.

They battle to the death – Ferdia’s. And then comes the verse after the verse where Cuchulainn laments the death of his foster brother. Sad.

I close the book. I wonder would Tim McShane have been sorry and crying over my body after his rage had passed. This story’s from how many thousands of years ago? And now? The King of England, the Kaiser of Germany, and the Czar of Russia are all cousins. Will they be at each other’s throats soon like Cuchulainn and Ferdia?

At our next session Peter has the Kelly fragment out again.

Peter is good-looking, no question. I can watch him without him noticing, so intent is he on the manuscript page. I move my hand closer to his.

The humpbacked letters in the manuscript stand so companionably together. For a moment I’m back in Sister Mary Matthew’s first-grade class trying to write a row of “A”s – capital and small – followed by “B”s and “C”s down through the alphabet. But they are people to me – alive. The tall “A” is the father, the round “B” is the mother, and the little “a”s and “b”s their children, and so I put them all together and then invite the “C” and “D” cousins, the “E” and “F” neighbors over until my paper’s a real hodgepodge.

Sister Mary Matthew’s annoyed. How can a girl as bright as I am be so disorganized? By third grade I see that the letters have to give up their personalities for the sake of the word, obey the rules, fit in, and the words must serve the story.

But here the letters are free and alive – not uniform at all. I imagine a scribe drawing them, making each unique.

I say as much to Peter and point to the serpent curled around a capital “P.” “Good observation,” he says. “Each scribe had an individual style. Some wrote notes in the margins, comments on the weather. There are verses even.”

He tells me he visited an abbey in Austria and examined an ancient Latin manuscript that contained a poem in old Irish. Some ninth century monk wrote about his cat Pangur Bán.

“The cat catches mice the way the monk catches words,” Peter says. He lifts his hand, grabs an imaginary mouse, then closes his fist. The moves are so quick and unexpected that I actually cry out.

“I’m fine,” I say, and I swear he looks down at my hand in a way that makes me want to keep my fingers there. I lift my hand. Muscles in that arm.

“Another monk drew a dog,” he says.

“What?” I think of how strong he must be, slender as he is.

“In your Kelly manuscript there’s a very realistic sketch of a dog with a long tail.”

“Where,” I say, bending so close to the piece of vellum my shoulder touches his.

“Not here,” Peter says. “The Book of Uí-Máine, The Book of the O’Kellys is in the Royal Irish Academy in Dublin. I was allowed to examine it once.”

“Once! Jesus. I’d think you’d want to pore over the thing.”

“Costs too much and they don’t welcome Catholics.”

“The administration. Headed by Lord Somebody-or-other.”

“It’s the same with all the ancient manuscripts. The Book of Kells is astounding, one of the world’s great masterpieces – I’ve only ever been able to see one page.”

“But Peter, wasn’t it Catholic monks wrote the damn things?” Now I’ve offended him with my language.

But he only shakes his head and then nods. “They did indeed.” 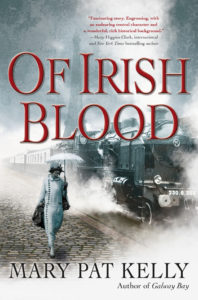 Of Irish Blood, by Mary Pat Kelly, out this month on Forge Books.

“Most of the great books of Ireland were destroyed. Cromwell’s soldiers cleaned their boots with the pages. The monks and families like yours risked their lives to save some. Others were stolen, but at least the thieves were intelligent enough to sell them to places like the British Museum or the Royal Irish Academy, but they’re still kept from the people.”

“I wonder why nobody railed on about this at the Clan na Gael picnics. I never heard my Uncle Patrick talk about stolen manuscripts and he had chapter and verse on the English atrocities,” I say.

“If you consider that Cromwell slaughtered all but three hundred thousand of the Irish population and a million starved to death during the Great Starvation, stealing a manuscript doesn’t count for much,” Peter says.

He takes a breath. “I don’t. They tried to erase our very identity, to stamp out who we really are.” And he pounds his fist on the table. “But they failed and these very manuscripts might help defeat them,” he says.

“Right,” I say. “Change our notion of who we Irish are. Why, just meeting Maeve makes me think of myself differently. And . . .”

But Peter cuts me off. “A more direct role for this page. The cause needs money. The new Home Rule Bill is being moved through Parliament right now. And this time we have the votes to pass it. But the Protestant unionists in Belfast are pressuring the British government to stop the bill. An MP called Edward Carson got five hundred thousand unionists to sign a covenant saying they’ll resist Home Rule by any means necessary. He’s that organized. The Ulster Volunteers say they’ll take up arms to stop Home Rule. And they have the money to buy weapons.”

What James McCarthy said that first day at the Panthéon.

“Dear God,” I say. “The men of Ireland against the men of Ulster.”

“And Carson’s not even from the North. Born and raised in Dublin. Held the Trinity University seat in Parliament. Worse, his mother’s family are from Galway,” says Peter. “Carson spent his summers there. Funny about these big-house families. Some get to know the country people and become nationalists. Carson’s cousin from down the road, Edward Martyn, works for the Cause. But others . . .”

Now, this is when I start to see the web of connecting families woven through Ireland. In many ways so like Bridgeport, where every conversation starts with whose cousin married whom, what childhood friends have wed.

“Now if the British think that we have a counterforce that’s armed too, that’ll make them think twice,” he explains. “The Ulster Volunteers are buying guns from Germany, where the best weapons are produced,” Peter says. “And there are German universities eager to buy Celtic manuscripts.” He explains that professors from Germany had been coming to Ireland for years to study the Irish language and translate the manuscripts, more or less shaming the British into valuing this heritage. “So, do I have your permission?” he asks.

“Providential, really, that a member of the Kelly clan appears just as I discover this fragment that can become a real weapon. But . . .”

And here comes Father Kevin through the door and talking as he walks over to us. Waiting to make his entrance, I guess.

“We have this wonderful concept in religious life called ‘interpreting permission’—acting first and telling the superior later,” he says.

“Pages of Irish manuscripts like your Kelly book are scattered all over the world,” Father Kevin says. “We’ll never know where most of them are, let alone ever get them back. And if any do turn up, the British will claim them in the name of the United Kingdoms of Britain and Ireland. What do you say, Nora?”

“I say yes. You have my permission on behalf of, well, the Kellys.”

Peter stands up. So do I. Father Kevin shakes my hand then and Peter does the same. Do I imagine he holds on for a few extra seconds? We smile. Comrades. Conspirators.

“Now, Nora,” Father Kevin says, “you won’t mention the Kelly fragment to anyone, will you?”

“Why? Are there British agents around?” And I laugh. But they don’t.

Father Kevin lowers his voice. “Not a joke, Nora,” he says. “We are watched. The British know Paris has been a refuge for Irish patriots for centuries. The government would just confiscate the page, and if they found out what we planned, well . . .”

“But surely you are safe enough in Paris.”

Father Kevin shakes his head. “Last year a young Irish student was arrested by the French police. He was accused of spying for Germany be- cause he’d traveled back and forth to Berlin studying with a professor of Celtic languages there. Deported and we knew the Special Branch would be waiting for him in Dublin,” Father Kevin says.

“Gosh, poor kid. What happened to him?”

“We managed to get him on a ship to America. Of course, he is in exile now and can never return to Ireland.”

“But if he becomes an American citizen, he can come and go as he pleases,” I say.

“The British don’t recognize naturalized American citizens. If you’re born in Ireland, you are their subject forever,” Peter says.

I must admit I do look behind me a time or two as I walk home and even cross the street so as not to pass the Palais de Justice. Though a part of me hears Sister Veronica’s reprimand, “You exaggerate to make yourself important, Nora Kelly,” after I explained that I couldn’t help being late because a horse cart had collided with a delivery wagon on Archer Avenue.

In Chicago maybe we didn’t have the grandeur of Paris but at least there we Irish are the police.

And then it’s Christmas Eve. ♦