Smyth, honored for his life-long commitment to building Irish and American business relationships, received the Lewis L. Glucksman Leadership award. The award is named for the late financier who, along with his wife, Loretta, founded GIH as a center for Irish Studies at NYU.

Quinn, the Bronx-born author of the Fintan Dunne trilogy, Looking for Jimmy, and Banished Children of Eve, was awarded the Seamus Heaney Award for Arts and Letters.

It was an evening of words and music. Joanie Madden (see page 84) and other accomplished musicians gave a lively note to the evening. Author and journalist Terry Golway served as a marvelous M.C., and all the speakers touched on common aspects of Irish identity, storytelling, and the importance of the diaspora, as the following excerpts show.

Irishness isn’t about religion, and it’s not about blood, and it’s certainly not about the twisted fantasy of race. We share the same DNA as every other member of our species.

What’s true of the Irish is true of every tribe, every family, every country, every religion. At their center what gives them a claim on their identity, and what serves as their inner compass, are stories. Yet stories have a special importance for the Irish. When everything else was taken from us – the kingdom, the power, and the land – all that remained and couldn’t be taken away were the stories. The essence of being Irish is in our stories. In a ceaseless flow of words first heard in the echo chamber of the womb, stories sung and danced and rhymed, words strung together in poems and prayers and curses.

Many years ago, at a bar on East Tremont Avenue, the wizened toothless Irishman on the stool next to me leaned over and whispered in my ear, “There’s no greater sin than being boring.”

I never heard a truer word spoken in my life. And for that scrap of unforgettable wisdom, I remain eternally grateful. My father was the son of a Tipperary- born, empire-hating, union-organizing, roving Irish rebel. A frustrated actor and songwriter, my father turned those skills to public speaking at politics. At his knee we learned the Holy Trinity – in the name of God, Roosevelt, and Kennedy.

The daughter of a maid from Blarney and a mechanic from Macroom, my mother, a woman of great grace and great faith, told us wherever we go, come back with a story. My parents set me footloose and free to make my own way, richer than any king or queen, my soul, and my brain, and my mouth, filled with stories.

I feel I’m one of the lucky ones to have been born to a loving family in rural Ireland, and educated at Trinity College Dublin, enjoyed three fulfilling careers around the world, including one dining for Ireland.

The adventure began in 1976. I had three assigned goals… build American support for equal rights for Catholic nationalists and Protestant loyalists; use American pressure to change British policy in Northern Ireland; and encourage American businessmen and women to invest in Ireland to create badly needed jobs. We were a small band of Irish representatives in New York City… but we had thousands of generous allies amongst the Irish diaspora. 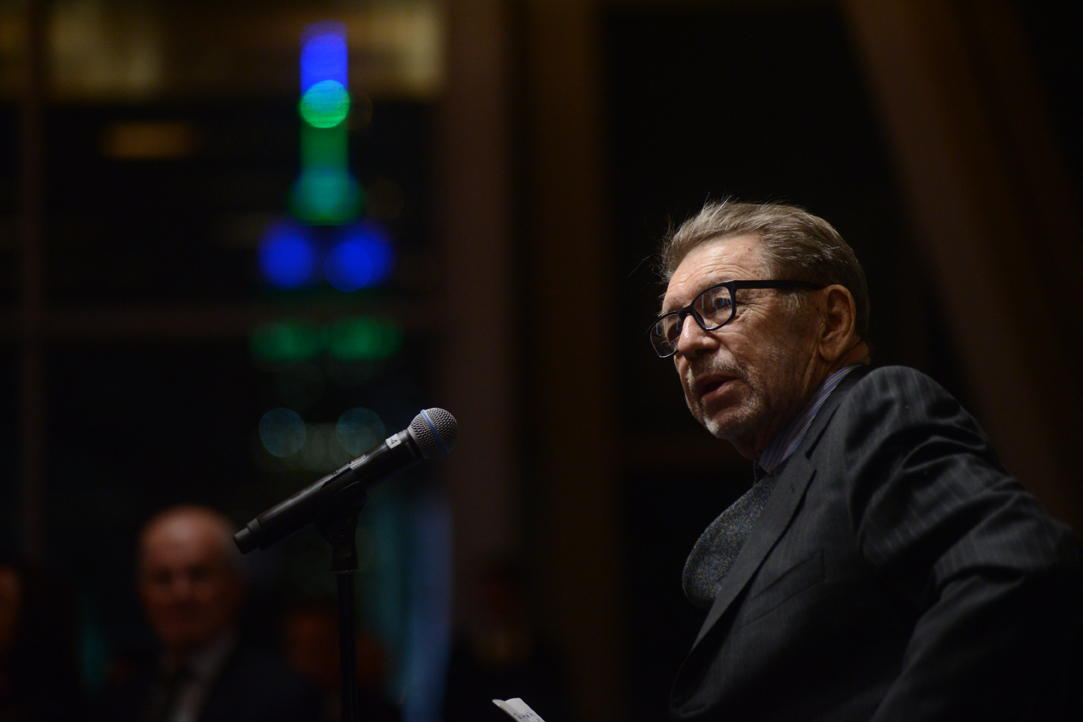 We’re here because of the people who carried us in here. And in my case, as in the case of so many people here tonight, we were carried by tough, smallish people who came and stayed, who didn’t find streets paved with gold but found that they could vote for their leaders on Election Day, that they could live in a city that respected them. That made them members of unions and members able to get educated in ways nobody before had done.

I’m one of that whole tribe that had the good fortune to be young right after WWII, and when I finally went into the Navy and came out later, I had… the GI Bill of Rights. And it gave us life. It said, Shakespeare is yours too, kid; the great artists are yours, too; the great music is yours, too; let us move into the world, and make our own mistakes, but live. ♦