Until now, the many genealogists who have researched Hillary Clinton’s ancestry have attached her Welsh grandmother, Hannah Jones, to the wrong parents. Roots detective Megan Smolenyak homes in on Clinton’s Welsh heritage and sets the record straight.

When it was announced that Hillary Rodham Clinton would be inducted into the Irish America Hall of Fame for her work on the Irish peace process, it was inevitable that I would explore the branches of her family tree, but it wasn’t the first time. Having delved into her roots in years past, I was familiar with the basics:

• Compared to other American politicians, especially Presidential candidates, her ancestry is more recently “off the boat” than most. Though some harbor a misperception of blue blood heritage, seven of her eight great-grandparents were immigrants, and none of them arrived wealthy. Some, for instance, labored in coal mines both before and after settling in the United States.

• Illinois and Pennsylvania claim most of her American family history, with other states such as Michigan, New York, and California playing supporting roles. Among her ancestral countries of origin, England and Wales are the most pronounced, followed by Scotland, France, and the Netherlands, with several branches weaving in and out of Canada over the generations.

• The deepest branches of her North American ancestry are mostly French-Canadian, so with French-Canadian family trees being among the most intensively intertwined in the world, it’s not surprising that she is distant cousins with other formidable women known primarily by their first names – Madonna, Celine, Angelina, and Alanis among them.

I took another look wondering if it might be possible to ferret out a previously undetected bit of Irish, and came up empty, so given that her three-eighths Welsh heritage makes her a Celtic cousin of sorts, I decided to take a deeper dive into this portion of her heritage and discovered that it’s rather surprising that Hillary Rodham Clinton exists at all. 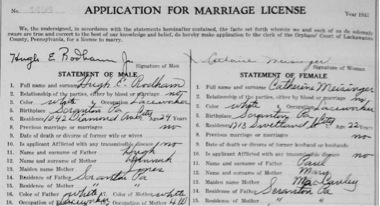 First there’s the matter of her father’s near-miss marriage of 1937. In July of that year, Hugh Ellsworth Rodham applied for a license declaring his intention to wed Catherine Meisinger, a fellow resident of Scranton, Pennsylvania. Had he married her, his offspring would have been part-Irish since his fiancée had Irish heritage, but Hillary only entered into the picture because he instead chose to marry Dorothy Emma Howell several years later. Curious what became of Catherine, his almost-wife, I learned that she married a Welsh immigrant and lived to the age of 96. 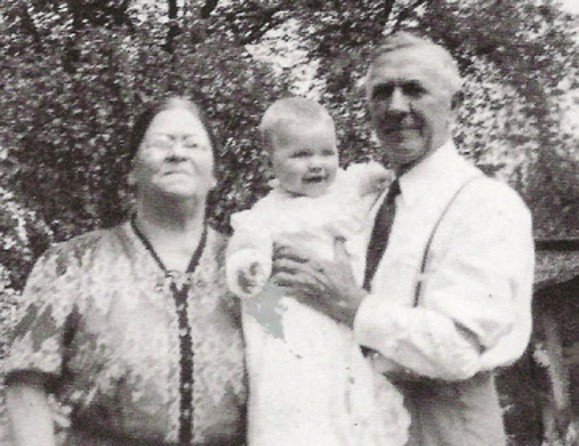 Meandering back another generation, I came to realize that other genealogists who had researched Hillary Clinton’s ancestry had attached her Welsh grandmother, Hannah Jones, to the wrong parents (two girls named Hannah Jones were born in Scranton, PA circa 1882-1883 and they latched on to the wrong one). I also discovered that Hugh E. Rodham’s parents had eloped. This revelation emerged gradually beginning with an oddly worded wedding announcement in a local paper. When I couldn’t find a marriage record in Scranton as anticipated, I scoured newspapers instead and found a snippet in an August 1902 issue stating that the couple had wed in Binghamton, New York a couple of months earlier on Memorial Day. Now I understood why I hadn’t found the record, but the choice of Binghamton revealed even more.

Announcement of Hugh Rodham’s marriage to Anna Jones in the Scranton Tribune Times.

Having roots next door to Scranton in the neighboring city of Wilkes-Barre, I knew that Binghamton was once a Gretna Green for those living in Northeast Pennsylvania. A Gretna Green (named after a southern Scottish village long known for “runaway marriages”) is a nearby place that couples go to marry because there are fewer restrictions, making it easier to do so there. Less than a decade after the Rodham-Jones nuptials, a 1910 article bemoaned the loss of income for Binghamton clergymen after local laws were modified, removing incentives for cross-border marriages.

Hugh S. Rodham and Hannah “Anna” Jones had gone out of state to marry, neglected to inform anyone for a couple of months, and opted to live with the bride’s parents. Could it be that the groom’s parents didn’t approve? A little digging strongly supported this notion.

On the surface, the English Rodham and Welsh Jones families were quite similar. Both had emigrated to Scranton in the early 1880s – the Joneses arriving about two years earlier than the Rodhams – and in both cases, the husbands had come first and the wives and children later. Thirty-one-year-old Isabelle “Bella” Rodham impressively made the cross-Atlantic journey with eight children between the ages of one and 11 in tow.

But once they settled in Scranton, their lives took radically different trajectories. In the Jones family, everyone worked in the coal mines, but in the Rodhams, all but one found less taxing employment. In fact, by the time of the 1900 census, the eldest son was already a physician. That same year, the Rodhams owned their own home, while the Jones family – headed by Mary, married but with her husband nowhere in sight – still rented.

Perhaps most telling of all, though, are the statistics regarding children. The census shows that the two families were roughly the same in size with Isabelle Rodham having given birth to 13 and Mary Jones to 14, but 11 Rodhams made it to adulthood while only four Joneses did, and that difference speaks volumes. Though many elements contribute to infant mortality, the less than 30 percent survival rate in the Jones family hints of the kind of grinding poverty that was so frequently a factor in sending children to early graves. It seems quite clear that the Jones family had struggled far more than the Rodhams.

All of this taken together suggests that when Hugh Rodham found himself smitten with Hannah Jones, he had fallen for a girl who was regarded as being from “the wrong side of the tracks.” If he hadn’t been bold enough to wander across the state line to marry his sweetheart, Hillary’s father wouldn’t have born, once again erasing her from the scene. And if Rodham Clinton recalls her grandmother Hannah as a strong-willed woman who “ruled everyone within her reach,” it may have been a reflection of her determination to escape the circumstances that left her the sole survivor of her birth family of 16 by her early forties.

What of Hannah’s mother, mentioned previously raising her family with an absent husband in the 1900 census? Peeking into her past makes it easy to see why she came to America.

Born around 1850 in Merthyr Tydfil – at that time, the largest town in Wales – she can be found in the 1851 census living with her widowed mother and three older siblings. Fatherless by the age of one, Mary Griffiths had already been dealt a tough hand. Her mother was an oiling woman while her sister Elizabeth and older brother Rees worked in the coal industry. Rees, toiling as a coal doorkeeper, was all of nine years of age. The next census would find Mary having joined the workforce as a 12-year-old servant.

Rees made his escape to Scranton in the early 1870s, so it’s little wonder that Mary would opt to follow him, but as this backward-in-time journey has shown, life wasn’t much kinder to her in America. Still, she had 14 children, and four of them survived childhood, and one of them – Hannah – lived long enough to know her children’s children, including a granddaughter named Hillary. 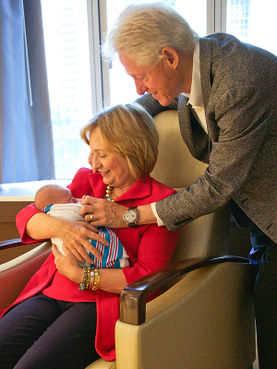 The next generation. Bill and Hillary Clinton with their granddaughter Charlotte Clinton Mezvinsky. (Photo: @HillaryClinton/Twitter)

Survival of the Fittest