Members from the Montserrat Emerald United Club joined in the fun. Montserrat's Irish heritage dates back to the 17th Century, when it became a haven for Irish Catholics who were persecuted on other Caribbean islands. St Patrick's Day is a national holiday there. (Image: BBC)

In addition to national landmarks, fountains, and even rivers (looking at you, Chicago) turning green in honor of Ireland’s patron saint, here’s your guide to the most exciting, least expected, and farthest flung St. Patrick’s Day traditions.

(UPDATE: Plus one in the comments!) 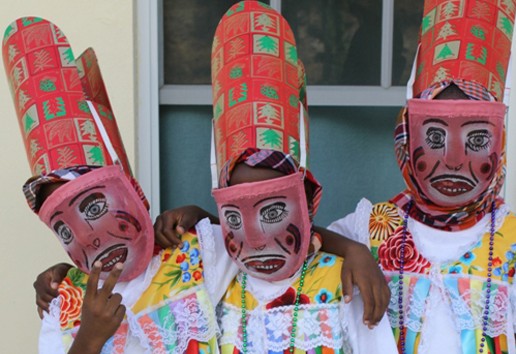 This tiny Caribbean volcanic island is the only other country than Ireland in the world for which St. Patrick’s Day is a public holiday, but not for the reason you might think. This March 17th marks the 247th anniversary of an unsuccessful slave revolt against the European whites who colonized it in the 17th century, seven out of ten of whom were Irish. Today, St. Patrick’s Day is celebrated by a week long festival of independence. 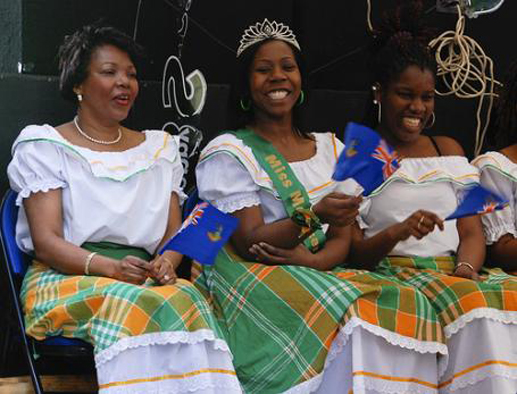 The central celebration is the Masquerade, where Montserratians dress in colorful hats resembling bishops miters, dance Irish jigs, and crack whips in mocking defiance of their one-time Irish masters. Montserratian historian Howard Fergus puts it this way: “We are celebrating the rise of the slave freedom fighters, but also the rash Catholic element in our history. They both have a place in our legacy, which is celebrated on the anniversary of the Saint’s death.” (Source: Janelle Oswald | The Voice) 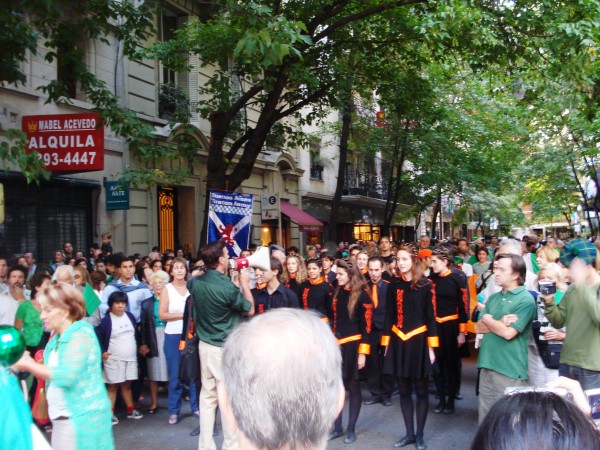 Though it’s often called “The Paris of South America,” the Argentinian capitol looks more like Dublin every March 17th. The largest St. Patrick’s Day celebration in South America, Buenos Aires foregoes a parade in lieu of an annual street party in the city center, featuring music, dancing (including Celtic Argentina, the dance troupe profiled in in this magazine last year) and plenty of craic at Breoghans Brew pub on the corner of Bolivar and Estados Unidos. (Source: Wander Argentina) 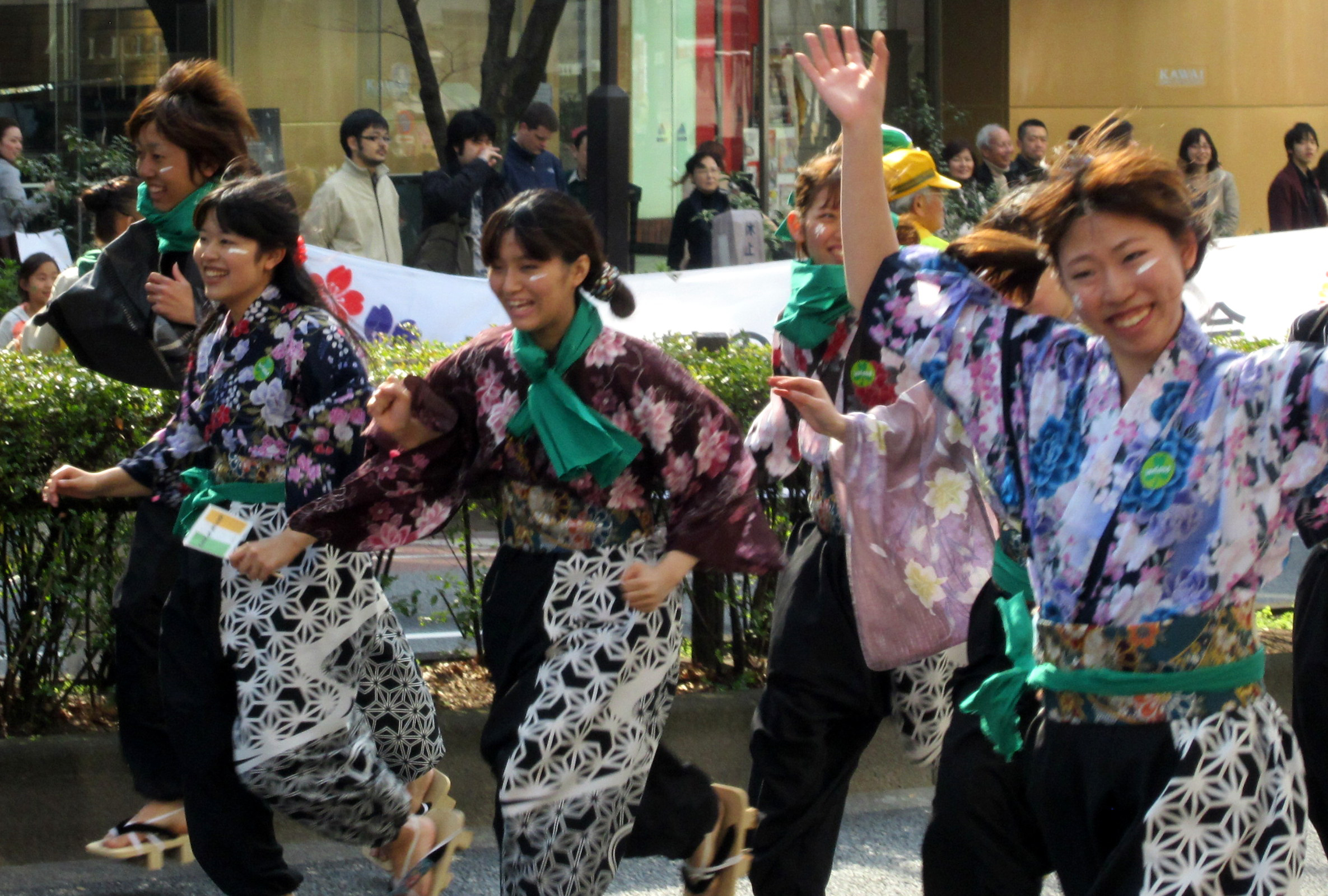 Started in 1992, the parade is the largest of several parades around Japan. It was began by Irish network Japan for the purpose of introducing Ireland to Japanese people and has evolved into a glorious mix of traditional Japanese stylized dress with Irish costumes (above). (Source: Irish Network Japan) 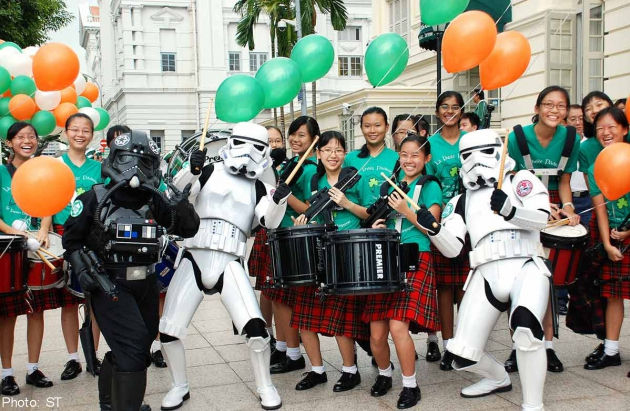 The Singapore River is died green, costumes are dawned, and a Harley-Davidson convoy leads the pack at the Singapore St. Patrick’s Day Parade, the largest celebration in Southeast Asia. The St. Patrick’s Society of Singapore (comprised mostly of ex pats) also hosts an annual ball at the Shangri-la Hotel with free-flowing wine and beer, live music, prize drawings, and Irish dancing. (Source: Asia One) 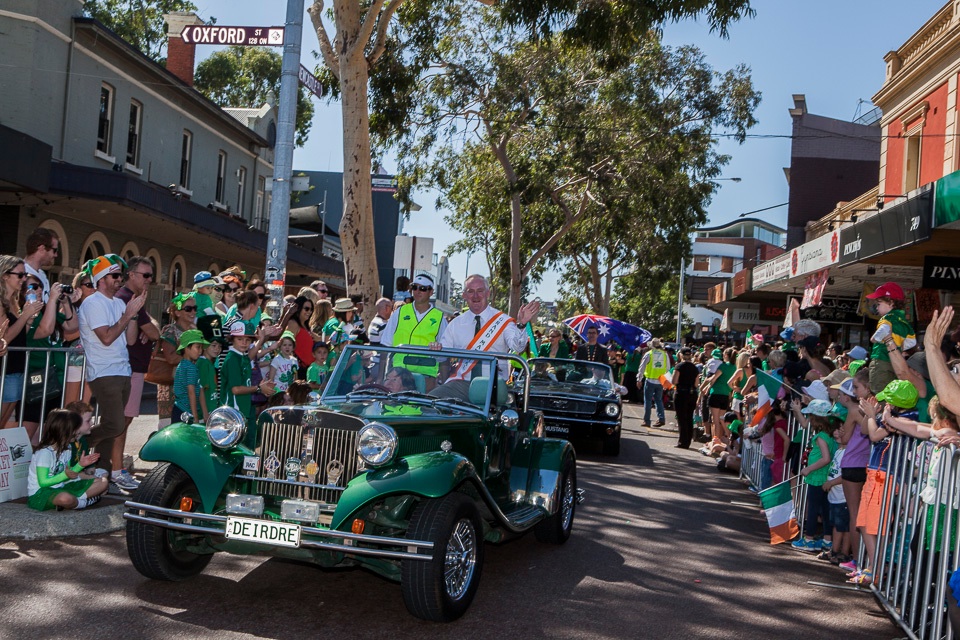 More than 80,000 people show up for the St. Patrick’s Day Parade and Family Day in Sydney, making it the largest such event in the southern hemisphere, and the only event in the world outside of Ireland to be organized and funded with support from the Irish government. But though Sydney goes big for a day, on the other side of the country continent Perth commits for the whole week with a host of races, competitions, children’s activities, and a massive parade as the finale. (Source: Sydney St. Patrick’s Day Parade / St. Patrick’s Day Festival WA)

Begun in the 1840s, Aukland now holds the distinction of the first St. Patrick’s Day party, since midnight on March 17 reaches New Zealand’s largest city before anywhere else. It is also the farthest celebration away from Ireland, almost exactly the opposite end of the world at a massive 11,290 miles away from Dublin. Naturally, Auckland’s 1,076-foot Sky Tower is lit with the irish tricolor all day. (Source: St. Patrick’s Festival Auckland) 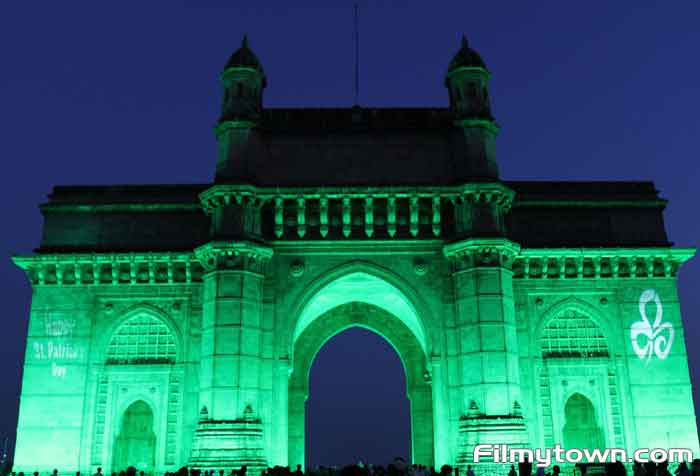 The Gateway of India in Mumbai. (Image: Filmy Town)

The Gateway of India in Mumbai goes green for St. Patrick’s Day, and the Irish pubs around the country’s major cities stock up on Murphy’s (Source: Times of India) 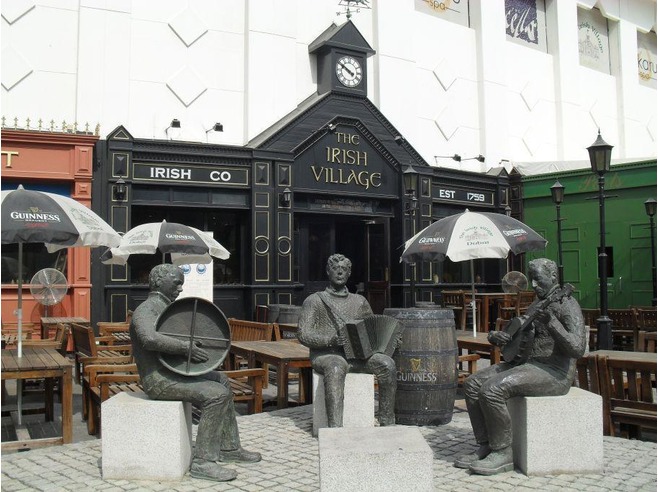 For the past decade, Boomtown Rats front man Bob Geldof has played a St. Patrick’s Day gig in Dubai’s Irish Village and this year is no different. “Last year, although the rain was ‘persistent’, we still managed to jam into the early hours courtesy of a makeshift stage and plenty of Irish spirit. So whatever the weather, this year is going to be a great craic as well,” Geldof said. (Source: Time Out Dubai) 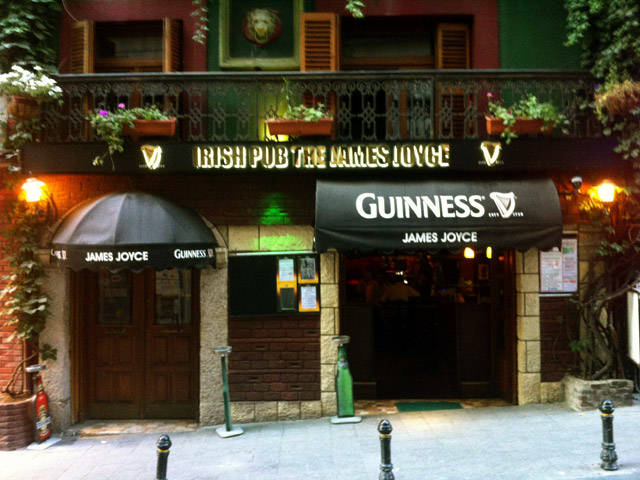 Head to Zagreb’s Tvornica Kulture (Culture Factory) where the Orthodox Celts, one of the most popular Croatian trad bands, will be celebrating their 22-year anniversary for St. Patrick’s Day. Left: The Orthodox Celts in an undated (but still dated) photograph. (Source: Croatia Week) 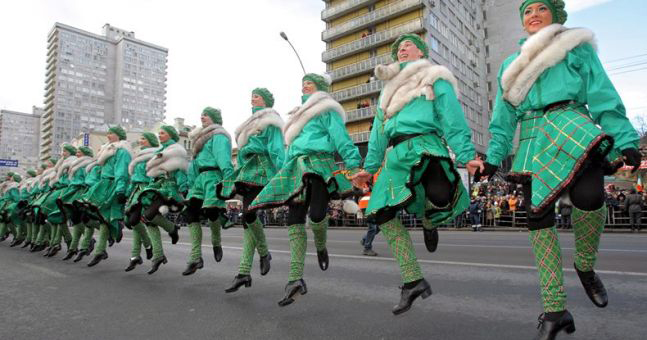 The parade started in 1992 and has kept on growing. Even in years when it was canceled or moved, Muscovites still congregated on Novy Arbat, the Moscow main drag where it all began on the 17th. Marching bands, Cossack horsemen, and green beer are found in abundance. (Source: The Russia Store) 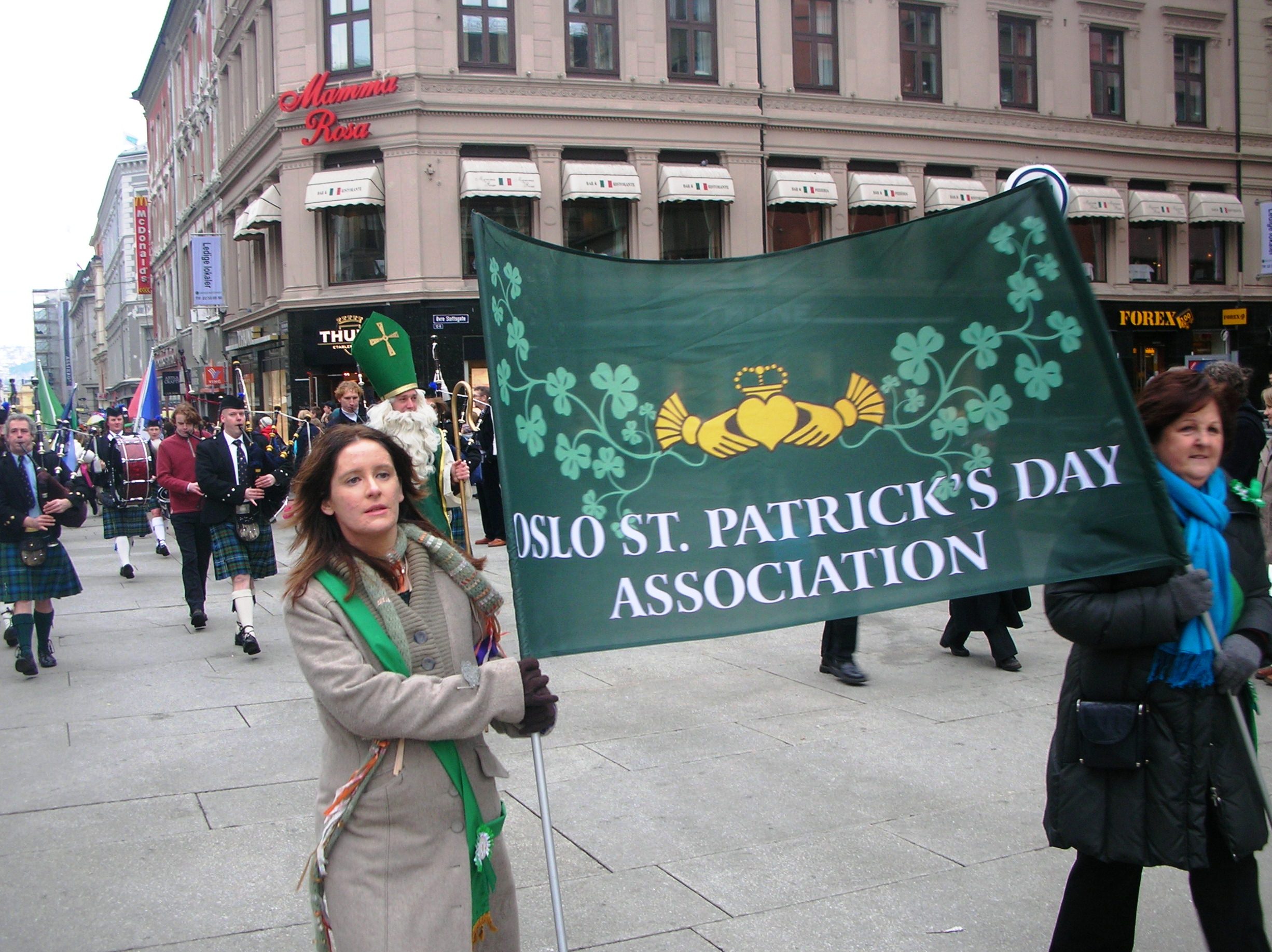 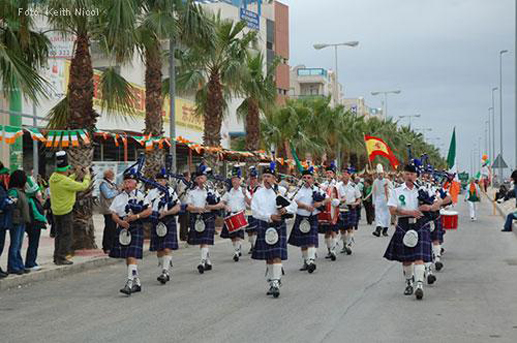 On the southern Costa Blanca in eastern Spain, this picturesque Spanish outpost plays host to the largest parade in Spain (Madrid is the close second). A favored destination of Irish vacationers, the fiesta lasts well into the night and spills onto the white sand beaches, long after the parade has ended. (Source: National Geographic) 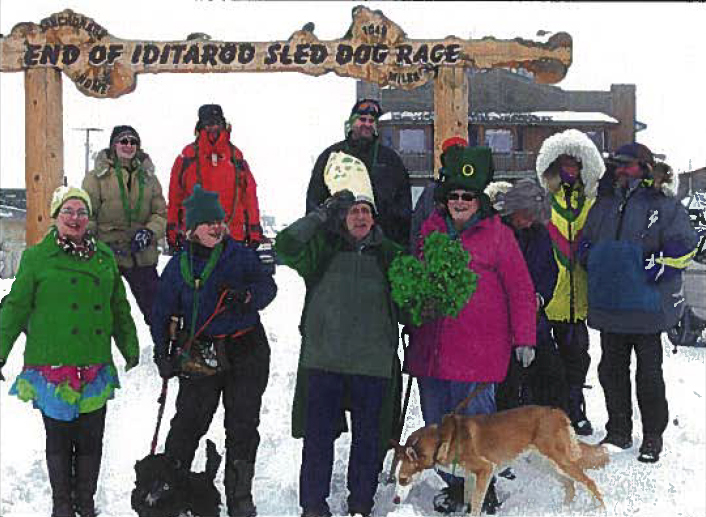 2014 St. Patrick’s Day in Nome at the end of the Iditarod Trail. Irish jigs are played through the city hall speakers and the paraders march to a police escort. (Image: Nils Hahn | Nome Nugget)

Usually corresponding with the mid-March timing of the Iditarod Trail Sled Dog Race, St. Patrick’s Day in Nome is celebrated with a parade down Front Street in what is probably the northernmost St. Patrick’s Day celebration in the Americas. This year though, the first finishers of the Iditarod are expected mid-afternoon on the 17th, after the scheduled parade. But if the first finishers decide to come in early this year, naturally, the parade gets bumped. (Source: The Nome Nugget) 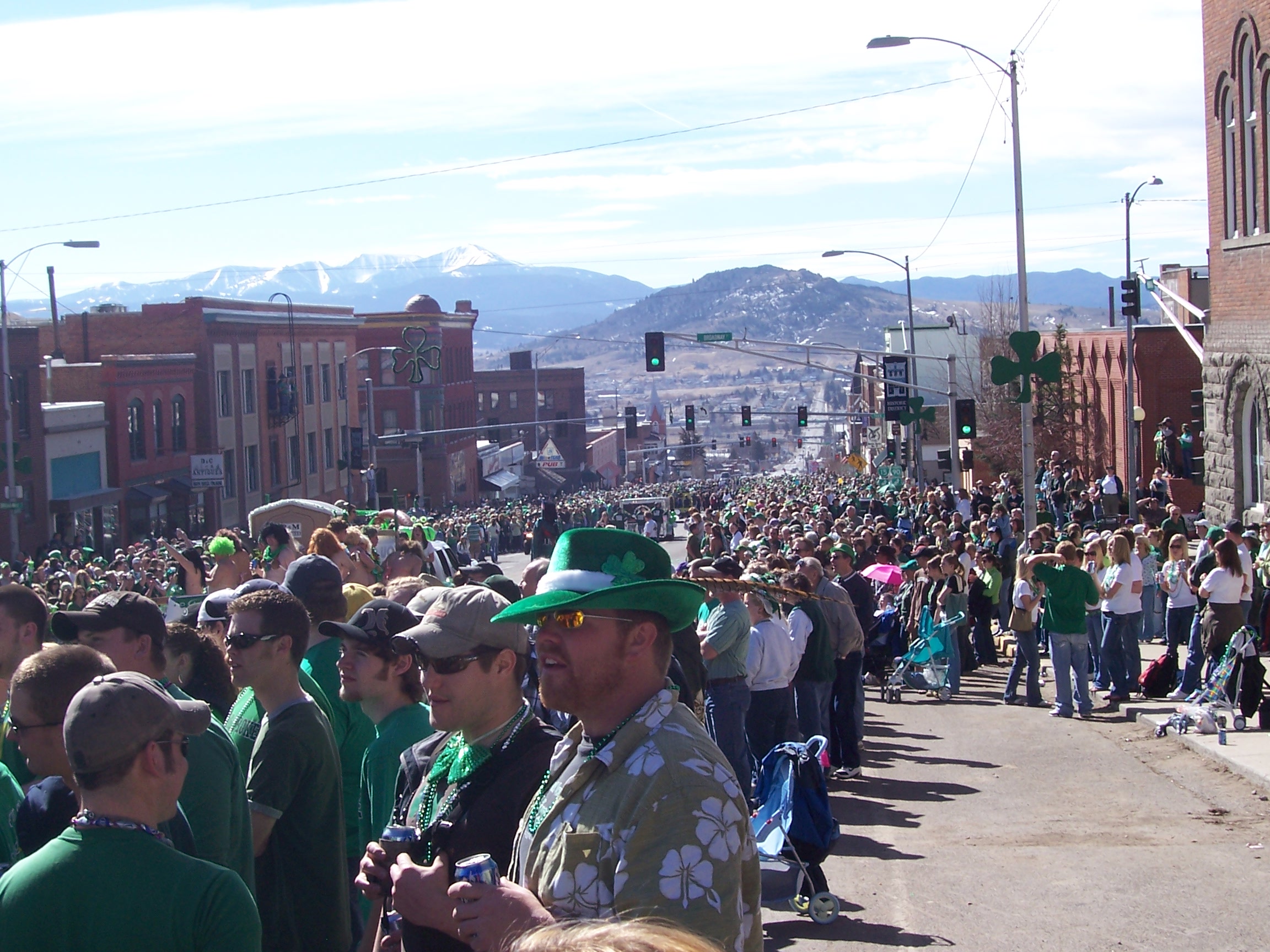 There was a time when Irish was commonly heard in the mines beneath and around Butte, Montana. Built largely by Famine emigrants, Butte had a higher percentage of Irish than any other city in the U.S. at the dawn of the 20th century. As the mines became less profitable, the Irish came in fewer numbers, but most who were there stayed and the city is steeped in Irish pride. Naturally, St. Patrick’s Day is a huge affair, and with no open container laws until 2013, arguably one of the country’s rowdiest. (Source: butteamerica.com) 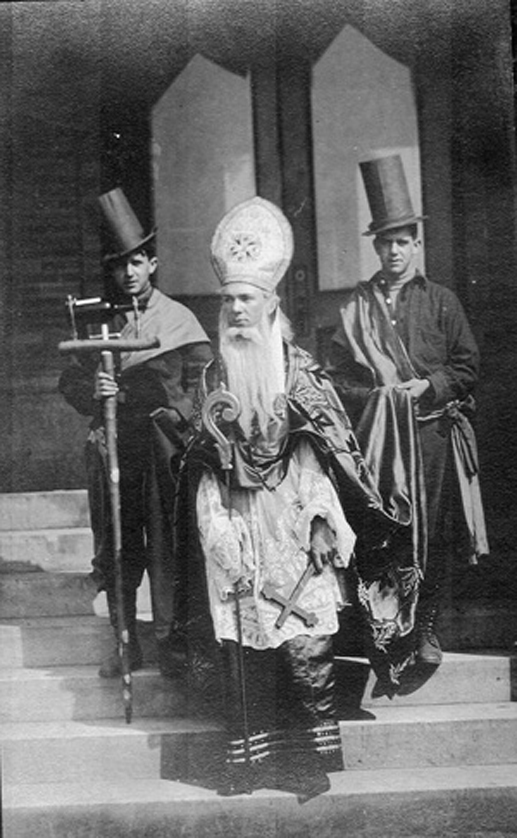 Though St. Patrick, Missouri has the patron saint for a namesake and it’s own shamrock postal cancel, Rolla to the south paints the streets green, elects an honorary “St. Patrick,” and crowns (do they know how ironic this is?) a royal court. The tradition began in 1908 at the Missouri University of Science and Technology, who recognized St. Patrick is also the patron saint of Engineers. (Source: St. Patrick’s Board at MST) 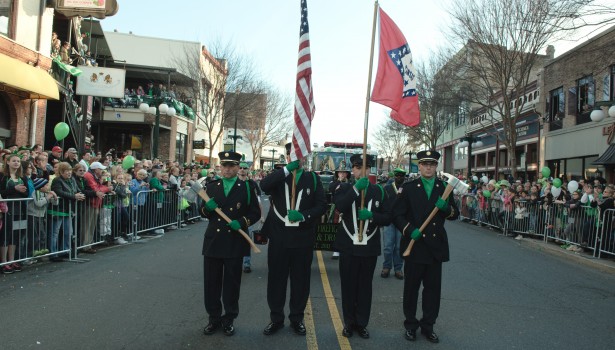 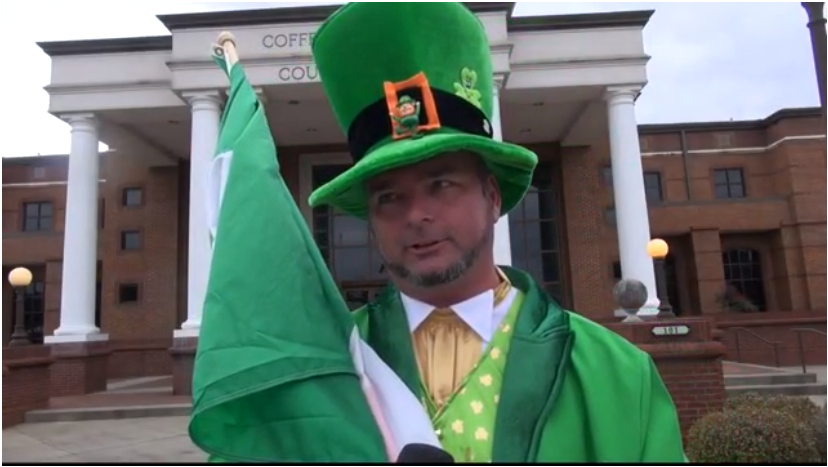 Dubbed the world’s smallest St. Patrick’s Day parade, for 20 years, a lone Irish person makes the parade route from Enterprise’s Boll Weevil monument, down Main Street to the courthouse, and back. This year’s “Grand Marshal” is the popularly elected Maggie Haas, ready to get her green on. (Source: WTVY CBS)

Actually one of the oldest St. Patrick’s Day parades in the U.S. Savannah’s dates to 1824 and traces a route through downtown Savannah, around the city’s verdant parks and fountains artificially dyed green. 750,000 people in a city whose population is only 136,286 ain’t bad. (Source: Savannah St. Patrick’s Day Parade Committee) ♦