In a fitting public tribute to Lady Gregory’s call for the Abbey Theatre “to bring upon the stage the deeper thoughts and emotions of Ireland,” the theater spent all of 2014 collecting memories from its own archives and audience members alike. The Abbey Theatre officially celebrated its 110th anniversary December 27th, the same date that 110 years prior saw the first performance on Ireland’s national stage.

“Our anniversary was a perfect opportunity to explore the Abbey Theatre Archive and revisit key moments in our history,” Abbey archivist Mairéad Delaney said.

“In setting out on the 110 Moments campaign, we sought to capture the spirit and energy of theatre as an art-form. We also invited our audiences to share their experiences and we were overwhelmed by their warm response.”

In addition to the 110 moments curated by the Abbey and displayed on a timeline inside the theater over 150 moments have been collected online and in person by the public on hand-written cards. The curated timeline can also be seen online at abbeytheatre.ie. 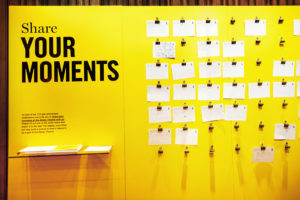 There are still spots left to share your own Abbey moments on the public board in the theater. Click for full resolution.