With Valentine’s Day just around the corner, Edythe Preet gives us the story of Áine, the goddess of love, and star-crossed lovers – the warrior Diarmuid Ua and Gráinne, daughter of the High King Cormac mac Airt.

Love. It makes the world go round, conquers all and warps the mind. We are star-crossed by it, swept away by it, fall into it, and become fools for it. It can’t be bought, but some have paid dearly for it. All’s fair in it. Wars have been fought for it, and kingdoms renounced for it. It’s better than wine, sweeter than candy and more glorious than a summer’s day. And anyone will tell you it’s better to have known it and lost than never to have known it at all.

Like hunger and thirst, love is a basic human need. It must be satisfied. We are consumed by our longing for it, and search unceasingly until we find the one true bond that fills the void. So basic is love to existence that even the earliest civilizations recognized its link with mating and procreation. Since time immemorial, supplicants have prayed to the divinities of love for the blessing of fertility.

Our ancestors’ lives followed the revolving seasonal wheel. The agricultural cycle of planting and harvest lies at the heart of all the earliest religions. And since it was the female who gave birth to the young, so too was the magic of sprouting grain ascribed to a divine feminine principle. Even in the midst of our technological age, She survives. We know her as Mother Nature and think of her as a nurturing woman in her prime years. But when humanity was young, the Goddess had a very different personality.

In Ireland, the goddess of love is Áine, a passionate beauty whose fiery hair is crowned with a circlet of silver stars. The daughter of Egobail, a member of the Tuatha Dé Danaan, her titles include Lady of the Lake, Queen of the Faeries, Goddess of Luck, and the Patroness of Crops and Cattle who gave the people of Ireland the Gift of Grain. Her name is found in the family trees of multiple Irish clans, and she is closely associated with County Limerick where, on the hill of Knockainy (Cnoc Áine), fire rituals held in her honor blessed the land. Her worshippers prayed that she would shower them with prosperity, fertility, sexuality and abundance. 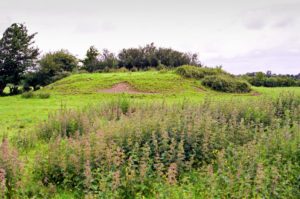 The Rathanny Ring Fort (Fairy Fort) in County Limerick, a couple miles away from Knock Áine, may be connected to the mythical deity Áine.

Even though Áine was also a goddess of healing, making her angry could have dire consequences. A few hapless mortal men who lusted for her suffered full measures of her wrath. In one early narrative Áine was taken against her will by the King of Munster, Ailil Aulum. In retaliation the goddess bit off one of Ailil’s ears, depriving him of his kingdom since only a “perfect” man could rule and leaving him to be forever known as “Aulum,” which means “one-eared.” In another tale, Áine was ravished by Gearoid Iarla, Gerald, Earl of Desmond. For his crime, Áine turned Gearoid into a goose, then killed and ate him.

One of Ireland’s great fables concerns the star-crossed lovers Diarmuid Ua Duibhne (Diarmid O’Dyna), an adept swordsman who saved Fionn mac Cumhaill and his Fianna warriors by single-handedly slaying 3,400 enemies, and Gráinne, daughter of the High King Cormac mac Airt. Though pledged to marry Fionn, when Gráinne met Diarmuid it was love at first sight. On realizing Fionn was an old man, she drugged his guards and eloped with Diarmuid. With Fionn and his men in hot pursuit, the lovers ran and hid across the length and breadth of the island, until Gráinne became pregnant and their pace slowed. One day they encountered a wild boar. To protect Gráinne and their unborn child, Diarmuid slew the boar but was gored by its tusks, and when Fionn found them Diarmuid was dying. Gráinne begged Fionn to save her beloved with water from his magic hands. Sadly, before she could convince the Fianna leader to do so, Diarmuid died in Gráinne’s arms. Scattered across all of Ireland, huge slabs of stone known as Gráinne’s Beds are said to mark the places where the tragic lovers lay together.

Another famous Irish love story has a happier ending. It is no coincidence that James Joyce chose June 16, 1904 as the day for Leopold Bloom’s pensive perambulation through Dublin in his masterwork Ulysses. For that was the very date of Joyce’s first romantic liaison with Nora Barnacle, his lifelong love and inspiration. Nora and James had vastly different personalities and interests, but they loved each other passionately. Though Nora often complained that James’ writings lacked sense and she wished he had been a musician, their love never wavered. When Ulysses was denounced as vulgar for its sexual content and banned from distribution, Nora stood steadfastly by her man and fled to Europe with him. Exiled for decades, Nora and James married in 1931 and stayed together until James’ death in 1941. Now Ulysses is hailed as the seminal modernist novel and one of the greatest contributions to world literature.

Ulysses records the events of an average day in the lives of three Dubliners: Leopold Bloom, a frustrated advertisement canvasser; his wife Molly, a lusty amateur opera singer; and Stephen Daedalus, a moody poet and part-time teacher. It is the saga of a man exiled by loneliness whose search for social, political and ethical fulfillment is thwarted by the situations of his very environment. In the novel’s final pages, Molly Bloom’s famous soliloquy, one long uninterrupted sentence recounting her answer when Leopold asked her to marry him, ends with the word “Yes” – Joyce’s affirmation of life and the power of love.

One of Ireland’s most famous icons is the Claddagh Ring. Its design, which originated in the County Galway fishing village of Claddagh, shows two hands joined in friendship around a heart of love surmounted by a crown of loyalty. For more than 300 years, the Claddagh Ring has signified the sentiment “This is my heart that I give to you crowned with my love” or the wish “Let love and friendship reign.”

As paramount symbols of unwavering love, Claddagh Rings will be found on the fingers of many couples who flock to the annual Blessing of the Rings ceremony on February 14th at Dublin’s Whitefriar Street Carmelite Church. For that is where the holy relics of Saint Valentine were relocated in 1836 by Pope Gregory XVI as a gesture of gratitude for Irish Carmelite John Sprat’s dedicated work with the destitute of Dublin. Amazing but true. Sláinte!

Many couples celebrate Valentine’s Day with a romantic dinner, some hoping the meal will also stoke the flames of passion. If that’s the intention, at least one dish should feature oysters. Not only are they an Irish culinary delight, they’re also a bona fide aphrodisiac as well!

Live oysters are best as fresh as possible and should be purchased from a store with good turnover. Reject those that do not have tightly closed shells or that don’t snap shut when tapped. The smaller the oyster is (for its species), the younger and more tender it will be. Fresh shucked oysters are also available and should be plump, uniform in size, have good color, smell fresh and be packaged in clear, not cloudy, oyster liquor. Live oysters should be covered with a damp towel and refrigerated with the larger shell down for a maximum of three days. The sooner they’re used, the better they’ll taste. When serving oysters on the half-shell, accompany with fresh lemon wedges. Twelve oysters will serve two people.

Place the oysters in a pot of boiling water and cook for three minutes.  Remove, drain and dry the oysters. Beat the egg with the milk and season with salt and pepper. Dip each oyster into the egg mixture and roll in the bread crumbs. Heat fat in a skillet. Fry each oyster for a few minutes on each side, or until golden brown. Drain on absorbent paper. Serve on split and toasted crusty rolls. 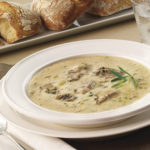 Warm milk in a medium saucepan until it begins to sizzle – DON’T BOIL. Slip the oysters with their nectar into the milk and heat them until their edges curl. Ladle oysters and milk into warmed bowls. Top each serving with a hefty tablespoon of  soft butter. Serve when golden droplets of melted butter cover the surface.

This article was published in the February / March 2015 edition of Irish America.

One Response to “Sláinte! Love Mór”