This issue’s Roots column is slightly different from the traditional format. Instead of looking at a single surname, or different but etymologically related surnames, I examine three unique but phonetically and geographically related family names. This is in part practical – the names are relatively uncommon compared to our usual surnames, so information on them is scarcer – but it is also to demonstrate just how many names are lost in this generation through marriage and the continuation of the patrilineal name.

For those who read Megan Smolenyak’s excellent genealogical research into the family history of Stephen Colbert (b. 1964) in this issue, the three names will be familiar. The one other thing they all have in common is the mac prefix, “son of.” This also shows just how removed today’s generalized anglicized surnames are from their lexical roots, since, at least in Colbert’s case, each of these masculine family names was eventually borne by a woman, and lost. (The “daughter of” prefix is ní, now almost exclusively used only in the Irish language.)

In addition to the issue of privileging the masculine prefix as the default mode of anglicization, the first name I will address, and the least common of the three, shows just how far removed a transliterated surname can morph from its origin, especially given regional Irish dialects. 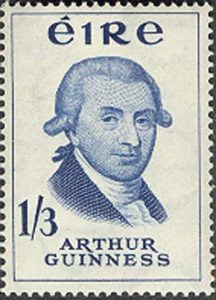 According to The Irish Times, there were exactly four land-owning McCreash households in 19th century Ireland, three in Co.Tyrone and one in Co. Armagh. The Times does show 37 instances of “McCreesh,” mostly in Armagh, but this is still a comparatively small number, perhaps because the name is more commonly found in a different anglicized form: McGuinness (for which 8,291 land-owning households were surveyed in the 19th century). Naturally, this figure ignores the non-land-owning population, which was largely Catholic, but it still gives an idea of how common these respective anglicizations were and their phonetic variations. The name derives from Mac Raois, which is itself an Ulster Irish corruption of Mac Aonghusa or Mac Aonghuis, “son of Angus.” It has also been anglicized variably as: Guinness, MacGuinnessy, MacNeice, Minnis, and maybe most strangely, Kennish.

The original Irish Mac Aonghusa dates back to the time of St. Patrick. By the 12th century, the family became the principal territorial lords of Iveagh, Co. Down under the leadership of Eochaidh Cobha, a descendant of whom is indeed the same Arthur Guinness (1725 – 1803) who took out a 9,000-year lease of the little brewery at St. James Gate in Dublin.

Interestingly, Eochaidh Cobha also leads to the McCrorys. Eoichaidh Cobha and his descendants were members of a branch of the Clann Rudhraighe, anglicized as Rory, and whose descendants, when they used the surname (which was, according to Edward MacLysaght’s Irish Surnames, surprisingly rare), became Mac Rudhraighe, McRory, or more commonly in Tyrone (where the sept was based) and Derry,  McCrory. And this is how Stephen Tyrone Colbert attained his middle name.

Colbert himself: “The McCrorys were O’Neills way back, and the story was that one of the O’Neills had been the Earl of Tyrone, and so they named me Tyrone after him.”

In the south, the name traditionally became Rogers.

Of these three names, McMahon is arguably the best known, and not least because of Johnny Carson’s singular sidekick, Ed McMahon (1923 – 2009) – though he probably did more for the name’s contemporary notoriety than any of the distinguished medieval lords, Armagh bishops, and military commanders who also bore the name. The name derives from two geographically distinct septs, one in Clare and one in Monaghan, but both originating from the Irish Mac Mathghamhna, which in turn is said to be derived from the early Irish word for “bear.” As with the other two names, there are geographic variations in its anglicization. The Ulster clan generally retains McMahon, while the Connacht clan, which is in fact related to the famed Brian Boru through Mahon, son of Murtagh Mór O’Brien, king of Ireland (d. 1119), varies between MacMahon and Mohan. Farther south in Musnter, the clan became Vaughan. 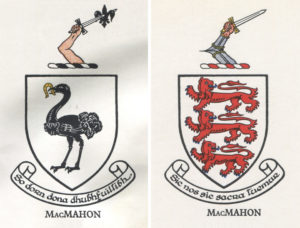 The coat of arms of the Ulster McMahons (left) and the Clare McMahons (right). Irish Families, by Edward MacLysaght (Hogges Figgis: 1957).

As may be expected given the Ulster tendency of this list, the northernmost McMahons were the most historically powerful. From the 13th century through the Cromwellian years in the 17th, they ruled much of the Oriel region in Monaghan, until the last chief of the family, Hugh McMahon (d. 1644), was betrayed by an O’Connelly in a 1641 attempt to seize Dublin Castle and was eventually beheaded. The Clare McMahons have fared better in recent times though, with the most famous, Patrice de MacMahon, Duke of Magenta (1808 – 1893), serving as President and Marshal of the Third Republic of France from 1873–1875. ♦

3 Responses to “Roots: The Macs”