The Mine of Allihies, Beara, Co. Cork, a drawing by Lady Chatterton published in 1838, just a decade before the Harringtons emigrated. 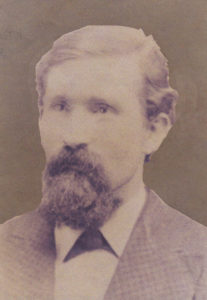 My great-great-grandfather John Harrington’s family had probably been in the Beara peninsula of southwest Ireland for many generations before he emigrated in 1848, during the Great Hunger. In Irish, the ancestral name was probably Ó hIongardail (anglicized to Harrington for ease of entry into tenant logs after the land seizures of the 17th century), a name associated with an ancient Cork tribe.

John and his wife Julia (a Sullivan who also had deep Beara roots) lived in Ballydonegan, a community of copper miners described in an 1841 Parliamentary report on mine conditions in the British kingdom as being in such a state of poverty that the people “barely exist[ed].”

Most likely evicted just a few years after that, when there was a mine closure caused by the inability of the laborers to work due to hunger, John and Julia took their two surviving children to Boston, where the family worked in the glass industry in East Cambridge. The picture at right was probably taken shortly after his arrival in America.

By the late 1860s, they had saved enough money to buy a house in the Brooklyn neighborhood of East New York, and the family remained in that neighborhood for nearly a century, wholly existing as businesspeople, municipal employees, lawyers and teachers. The last Harrington to be raised there before the family scattered throughout the United States was my father, Joseph, who will celebrate his 93rd birthday this coming May. ♦

You can also e-mail the picture to submit@irishamerica.com.