As a work-a-day archival historian, I am generally allergic to historical fiction. But occasionally I discover a novel that reaches into the minds of contemporaries in a way that historians themselves cannot match because they are usually tied to written evidence. Sometimes there is a psychological dimension to historical insight that comes across in the art of the novel, for example in Paul Scott’s Raj Quartet. I am proud to have played a minor part in the mid-1970s in helping to make the historical significance of his work more widely known, though I did not go as far as Max Beloff in saying that one could learn more about the British of India simply by reading Paul Scott than by bothering to read the historians of the Raj. 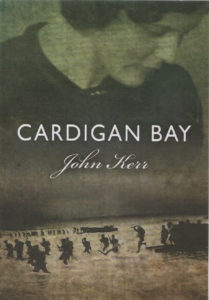 More recently I have read with great enjoyment and intellectual benefit Shirley Hazzard on Hiroshima and Dan Jacobsen on the family of Leopold II, King of the Belgians…both works of historical fiction have made an immense contribution to our understanding of historical events and personalities.

John Kerr’s “Cardigan Bay” (new edition now available) depicts similar epic themes. It is about a love affair of a British officer and an American woman living in Ireland during the Second World War. At the beginning of the war the British conducted secret talks in Dublin that would have created a united Ireland in return for Irish support for the Allied cause and the use of Irish ports. But the Irish Prime Minister Eamon de Valera refused to enter the war. Mutual mistrust endured, as did the mixed views of the Irish themselves toward Nazi gunrunning to the IRA. Such is the background to Cardigan Bay’s intricate plot. At the risk of revealing too much, let me merely say that one of the key figures is an anti-IRA, anti-Nazi German, a man of ethical principle, who participates in the abortive attempt to assassinate Hitler in July 1944.

The theme of courage mingled with ambivalent attitudes toward the war is unforgettable. Through the triangulation of two parts of the war with a distant third, Kerr gives the reader a new understanding of Irish neutrality, the thuggery of the IRA, the run up to the Normandy landings, and the moral resistance of a few officers of the Wehrmacht to the Nazi regime. Kerr is a writer of great scope, whose published novels range from the social mores of Victorian England, the horrors of trench warfare in Flanders in the First World War, and espionage in the Bahamas in the Second. But he is at his best in bringing to life the complex history of World War II in Cardigan Bay.

William Roger Louis, CBE is a Fellow of St. Antony College at Oxford University and the Editor-in-Chief of The Oxford History of the British Empire. Professor Louis was awarded the 2013 Benson Medal by the Royal Society of Literature in recognition of his enormous contribution to English literature. He is also the past President of the American Historical Association and Chair of British Studies at the University of Texas.