Growing up, Cathal Armstrong learned that a man’s place was in the kitchen.

From an early age, Cathal Armstrong understood the importance of time spent together at the dinner table, as well as the effort required to get food on the plate.

A professional tour operator, Cathal’s father traveled and brought unusual foods from places like Spain, Greece, and Algeria back home to Dublin, where he integrated the ingredients into his enthusiastic cooking.

“In addition to cooking, Dad also was a hobby gardener,” recalls Cathal, now an acclaimed chef and restaurateur at Restaurant Eve in Alexandria, Virginia, as well as the author of My Irish Table: Recipes from the Homeland and Restaurant.

Armstrong is eager to continue to introduce America to the potential of Irish cuisine. But it took time to get Restaurant Eve to where it is today. 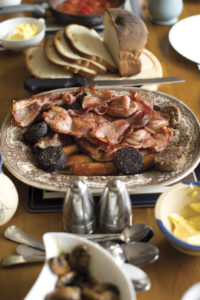 One of the various meat platters at Restaurant Eve. Most of which comes from either Virginia or Ireland.

“It really wasn’t until six or eight months after we opened the restaurant that I started to gradually add in some of these Irish ingredients and Irish things from home,” he says.

“We had already established a reputation for quality at that point, and Irish cuisine and quality weren’t necessarily synonymous. You wouldn’t think of fine dining when you’d say ‘Irish.’

“Still, to this day, I talk to people about it and they say, ‘What’s good Irish food?’ You know, other than what we jokingly say, ‘boil the bejayzus out of it’ – the Irish cooking technique,” he jokes.

“But Ireland is a small island and it has a moderate, temperate climate, it has green grass so we can graze cattle and sheep outdoors year-round and we can grow crops year-round,” he explains. 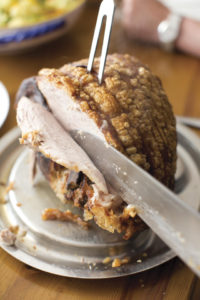 Leg of pork, for now. The menu changes seasonally, and sometimes more.

“They’ve always had the raw materials to have an elegant cuisine, but just because of the history of hundreds of years under British rule, they never really had the opportunity for a cuisine to develop. With the Celtic Tiger and the changing economic climate in Ireland, in the ’90s chefs started returning to Ireland and using the indigenous ingredients there to create a cuisine that was much more elegant and representative of what Ireland can be.”

Along with creating food that draws from Irish and international inspirations, Armstrong is also passionate about helping to impact food policy in the U.S.

He participated in a push for the USDA to approve Irish beef for import into the U.S., and is passionate about campaigns that seek to get people eating more healthfully.

“The problems in the food chain are so many at the moment that very often I meet people who say, ‘it’s just so big and so bad, there’s no way that we can fix it.’ But we have to take steps and take responsibility to make change,” he says.

“I’ve always said that we have to have a positive attitude about it and not a bury-your-head-in-the-sand attitude. I’ve lobbied on Capitol Hill for GMO [genetically modified organism] labeling on food, with Food Network and a bunch of other chefs from around the country.”

He  is also a founder of Chefs as Parents, a nonprofit organization partnered with the Obama administration focused on improving school lunch systems.

“A small group of chefs in D.C. were asked by the White House early in the Obama administration to look at school lunch and give our opinion on it. We went to a couple of elementary schools in Washington, D.C., and were appalled by what we saw there,” he says.

Another campaign called Chefs Move!, which asks chefs across the country to get involved in their local schools, was launched soon afterwards. 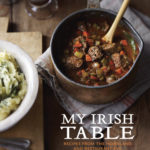 “It’s such a big issue and such an important issue to me. I’m a parent, and I’ve seen what children are being fed in schools, and it’s horrifying…[Chefs] are in a position where we can participate in a conversation about how we can improve our food system, not just in school lunch, but in many areas where there are issues. Farm subsidies need to be changed and GMO labeling. We’re innovators in our communities, we’re business owners and leaders with a loud voice, so I’m happy to use it wherever I can.”

After undergoing a more personal transformation in which he lost about 70 pounds, Armstrong is now working on a health and fitness-focused cookbook. He says it will be characterized by “the kind of food I’ve become renowned for, natural, healthy, local, in-season eating, and how to stay fit and eat well at the same time.”

Kara Rota is director of Editorial and Partnerships at Cookstr.com, the top resource for cookbook recipes online. She is also host of the Clever Cookstr podcast on quickanddirtytips.com. She studied writing, technoethics, and food politics at Sarah Lawrence College. Kara has been a featured speaker on food and technology at numerous venues including Food Book Fair, the Roger Smith Food Conference, and the Brooklyn Food Conference.

One Response to “His Irish Table”

Global sales of Kerrygold butter and dairy products have exceeded €1 billion in revenue per year, a first for an...

An old-time bar in Brooklyn, Farrell’s has served as a community center since the 1930s, and is the last marker of...

Alcohol can be served for the first time since 1927 on Good Friday in Ireland this year. ℘℘℘ Finding a pint of...