Follow the Music:
Advice from a November
Holiday in Ireland

From left: Jano Cabrera, Clare Gannon, Liz Cunningham-Purchia, and Tim Gannon at Croke Park in Dublin for the U.S./Ireland Men’s soccer friendly. Despite their World Cup performance, the U.S. lost.
All photos courtesy of the authors.

Liz Cunningham-Purchia, her boyfriend Tim Gannon, his sister Clare, and her husband Jano Cabrera, all Washington, D.C. transplants, planned a November escape to trace their roots and follow the music. This is their account of six nights in Ireland.

We’ve never heard any of our relatives say “You have to visit Ireland in November.” Nor would our practice of booking evening accommodations in a foreign country just a day in advance win us any gold stars for planning. But on our recent trip, it was exactly the way to do Ireland. We felt we had the country to ourselves, and ultimate flexibility. Asking hotel employees, shop keepers, waitresses, and the odd bartender along our route “What should we do between here and there?” got us better driving routes, superior accommodations, well known and hidden-gem restaurants, and the location(s) most likely to have an evening session of traditional music in each town.

The trip had first been proposed as a chance to see a favorite band play a few shows on an Ireland tour – which ultimately did not come to pass. But we ran with the idea (thanks anyway, Reckless Kelly!) and had a grand time, from touching down in Dublin all the way through a drive out to the West Coast. Ancestral roots were discussed. Futures were cemented. And while the sights, sounds, tastes, and history of the places we stopped all remain with us (thank you, Instagram!), the people are the unforgettable experience.

We arrived in Dublin on the Tuesday the U.S. Men’s National Team played Ireland in a soccer friendly. While the final score left us disappointed, we thoroughly enjoyed seeing the Book of Kells at Trinity College, stopping by the General Post Office, and touring the Old Jameson Distillery. But it was on our first stop after checking in to the hotel where we discovered the secret to maneuvering Ireland during the low season – ask the locals. We stayed at the Brooks Hotel, just down the street from Ragland (part café, part clothing store) where the barista gave us a short list of restaurants for our next stop: Galway.

We arrived in the early afternoon, dropped our bags at the charming House Hotel, and immediately went to Ard Bia for lunch. The barista at Ragland steered us well. Two servings of beef stew, a smoked salmon salad, a squash soup, and one slice of carrot cake too large for the four of us to eat later, and we were already looking forward to eating at her next recommendation – Kai Café, which uses all local produce. 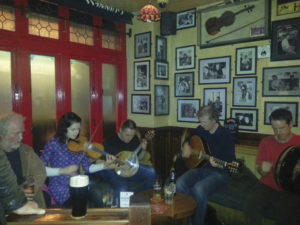 The trad session at Tig Cóilí in Galway, where the music continues long after midnight.

The House Hotel, located on Merchants Road Lower, afforded easy walking to shopping and the Cathedral of Our Lady Assumed into Heaven and St. Nicholas. We saw the JFK mosaic in the Cathedral and did some shopping at Designs of Ireland, where many sweaters were tried on. Several were purchased. It left us hungry to try Kai, but here we ran into the one and only time where we needed to plan ahead. Not having a reservation, we landed at Oscar’s Bistro, where the food was delicious, Siobhan took great care of us and sent us off to several pubs likely to have a trad session.

We settled on Tig Cóilí, situated on Mainguard Street at the end of Shop Street. This cozy pub was filled with locals of all ages enjoying the music with people jumping in to dance if the mood struck them. It really felt like the whole community gathered around to hear friends play. This is a family run pub, whose members, musicians in their own right, join in the session when they are not needed behind the bar. We left around midnight, but the music kept going.

The next morning, Thursday, we departed Galway in a dense fog headed for the Cliffs of Moher. We stopped for a cup of coffee at the Roadside Tavern in Lisdoonvarna where the owner, Peter Curtin, got us sorted. Not only on the Cliffs of Moher, which he assured us would be clear of the fog, but also on our route to Tralee where we would stay overnight. He sent us across the River Shannon on the ferry, avoiding Limerick, saying, “the only thing to see there are four lane highways, and you’ve probably seen enough of those in the States.”

When we got to the cliffs the fog had indeed lifted, the parking lot was nearly empty, and only a handful of other people climbed around in the sun with us.

That night in Tralee we had dinner with Tim and Clare’s cousins Maureen Scannell, Jim Gannon, and his wife Bernie. Maureen had attended a Gannon reunion in Iowa in the 1980s and her home has since been a stopping point for family traveling through the Old Sod. Despite a difference in age, and the fact that neither Tim nor Clare had had any contact with Maureen in nearly 20 years, stories about relatives were swapped, family trees were sketched out, and Jim and Maureen provided a few clues on where in County Kilkenny the Gannons began their journey to the United States.

Friday saw an easy drive from Tralee to Dingle allowing for several stops to photograph breathtaking hillside fields full of sheep and the waves at Inch Beach. We checked in to the Greenmount House, where Gary Curran, the manager/son of owners, made up a list of restaurants, pubs, and shops, and promised a list of hikes for Saturday after breakfast. 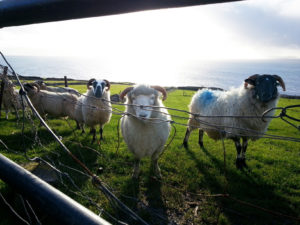 Sheep at Inch Beach in Co. Kerry. While many were encountered on the road, these were safely behind a fence.

Some shops and restaurants were closed in November, but we had no problem getting a table for four at Doyle’s Seafood Restaurant. Claire McDonnell expertly talked us through the menu, and her suggestions of the seafood chowder, mussels, and the braised lamb shank all hit the spot. She then sent us around the corner to O’Sullivan’s Court House Pub for some Friday night trad music.

After a delicious breakfast Saturday morning at the Greenmount, Gary outlined several places where we could “go out walking,” which in American would be called hiking up a mountain.

We drove out of Dingle on the Slea Head Loop stopping to gasp at the rough beauty, and at several places where the sheep were out on the road, and then finally where Gary suggested we stop to “walk.” He said, “You drive over to where you see the radio tower and park there. Then you’ll have to climb over the fence and from there you can walk to the top of the mountain. When you get to the top, you’ll be able to see all around the peninsula.” 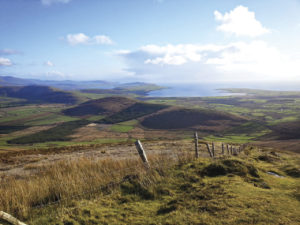 A view of the Dingle Peninsula from the top of Cruach Mhárthain.

Cruach Mhárthain is the name of the mountain, and the views are breathtaking. And while the trip had been planned in order to see a favorite band play a few shows, it was not the only reason Tim had in mind. Walking single file, and breathing hard, Jano, Clare, Liz, and then Tim reached the peak of Cruach Mhárthain about 11:00 a.m. local time. No sooner had Tim reached the top than he pulled out a diamond ring and asked Liz to marry him. She said yes, sparing everyone an awkward hike down the mountain, and allowing for a stunning backdrop for Clare and Jano to use while snapping photos of the happy couple.

While it could be said that everything was downhill from that point, our last two days in Ireland flew by with stops in Killarney and Kilkenny. In both towns we were upgraded to larger hotel rooms (thanks again, low tourist season!) and again the locals steered us toward superior spots for live music – the Killarney Grand Hotel – and food – Zuni Restaurant in Kilkenny. 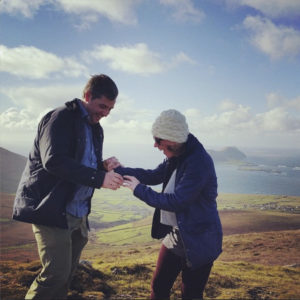 Tim and Liz after the proposal on the top of Cruach Mhárthain on the Dingle Peninsula.

Sunday night before turning in for the last time in Ireland, we went for one last pint at Bridie’s Bar and General Store, and because the bartender, Hughie Morris was such a delight to talk to about our trip, his years in the States, and whether Pat Gannon of Pat Gannon Auctioneers would be in the office before we had to drive to the airport the next day. Then one turned into two.

In today’s Ireland, free Wifi is about as ubiquitous as rain and sheep in green pastures. From-out-of-the way pubs to a hotspot in our rental car, unplugging completely wasn’t in the cards. But whether it was the pace of the off-season, the scenery that confirmed the Ireland in our minds, or the easy grace of the many locals who helped us, four people who live and work in Washington forgot the world for a while.

If that’s not proof of the magic on that island, then you’ve never been to Washington, D.C.

And if you still hold any doubt in your heart, if you don’t believe a country roughly the size of Indiana could possibly hold so many treasures, well, then you’ve never been to Ireland.

3 Responses to “Follow the Music:
Advice from a November
Holiday in Ireland”

Tourism Ireland hosted a stellar event at The Lotte New York Palace Hotel in New York City on January 28 to launch its...

Ireland: There’s Never Been a Better Time to Visit