Songs for the Ancestors

Judy on stage for her “Live in Ireland” concert, which was filmed in Dromoland Castle.

Judy Collins on finding inspiration in the experience of her antecedents. 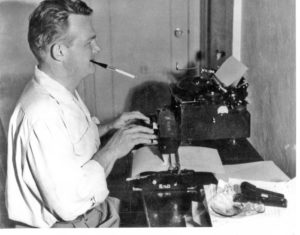 She learned “Danny Boy” and “Kerry Dances” from him. Judy Collins planned to sing the songs in her upcoming PBS Special to be recorded in Ireland. Well, now the special is airing across the country to excellent reviews, high ratings and delighted audiences. And one piece that gets a great response from the crowd is a song Collins herself wrote called “New Moon Over the Hudson,” her antehm to immigrants inspired by the stories of her own ancestors. 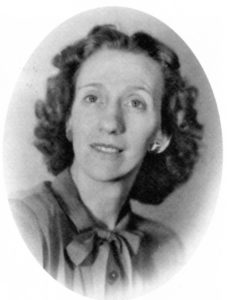 We talked about the genesis of the song over tea at the St. Regis Hotel under the painted ceiling of the dining room while a harp played and Christmas lights punctuated the late afternoon darkness. We were both aware that it was the hardships endured by our ancestors that made such moments of grace possible. That is the theme of “New Moon Over the Hudson.”

While Judy’s father had a great passion for Ireland, he had little specific information about the Collins family to pass on to his daughter. That changed. Judy recalled the circumstances.

Through this magazine, Judy was introduced to genealogist Megan Smolenyak. “All I really wanted to know was where my family came from in Ireland and when they had arrived in America. Megan began by examining Civil War records and discovered that two of my ancestors had died in the Civil War fighting for the Union. I hadn’t had a clue about that. She also found a very touching letter to the Pension Administrator from the mother and sister of Rufus Collins. He had been their only support but now he was dead. And then Megan found out that an even earlier relative of mine had been a drummer boy in the Revolutionary War. Megan made this marvelous book of my family history. I read it over and over.”

The information on her Irish ancestors especially resonated after the birth of her great-grandson added a brand new branch to the family tree during the time Judy was preparing for her “Live From Ireland” PBS Special.

“I was thinking about my father’s family as I was getting ready to go to Ireland. The first two lines of the song, ‘There’s a new moon over the Hudson and the stars are shining bright,’ had been in my songbook for years and then I realized that the next line should be ‘and I think about my true love in Ireland tonight.’ I also had the line ‘Central Park at midnight in a carriage in the snow’ in my book and now I heard ‘I find I think of Innisfree where the emerald shamrocks grow.’ When the words start coming it’s kind of like taking dictation. You just have to be ready. I got the words and the melody came along. Then I was doing a concert in Lexington and I realized probably my ancestor could have played his drum here.

My father’s father’s fathers
they sailed from Irish shores
they played the drums at Lexington
they fought the Civil War.
They died to save the Union
they lived to see me born
and in their dreams they saw
the Irish Morn.

“I knew that they had suffered. That they had left against their will because of trouble and oppression and I heard the line ‘sailing in ships made of tears and smoke.’ 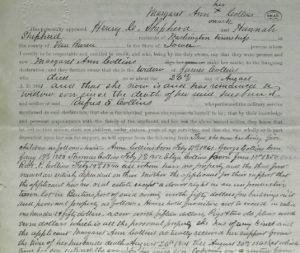 (Click to expand.) This is an affidavit from the Civil War pension file of Rufus Collins where his mother, Margaret Ann, is testifying about the fact that her husband has died, she’s got a bunch of kids, and that Rufus was the main means of support for the family. You can see Margaret Ann’s mark in the upper right.
This was 1865. Sadly, within two years, their house would burn down and Margaret Ann would die. As Megan Smolenyak, who discovered the affidavit, said about Thomas (Judy’s great-grandfather), “Between the ages of eight and 14, then, young Thomas had endured the loss of his father, his brother, his family’s main means of support, his family home and all their possessions, and his mother.”

“Megan thought my ancestors came from Northern Ireland. And interestingly on my first trip to Ireland in 1964 I was invited to the home of the McPeake family in Belfast and met their grandfather who had written ‘Wild Mountain Thyme’ and brought the Irish harp back into vogue. They were devoted to the Irish tradition. I didn’t know then that my own family had probably come from not far away.

“And now I have returned to Ireland and I am ‘singing the old sweet songs, singing and dancing in the purple heather.’”

“New Moon Over the Hudson” speaks to the history of many Irish Americans and already sounds like a classic as do the two songs Judy Collins wrote for her parents. “In the Twilight,” released in 2012, evokes her mother: “Marjorie my mother / Sweet Marjorie of the garden / That blooms now in my heart.”

The emotions expressed are so real your heart stops. Now find her 1974 performance of “My Father” (also on YouTube), which, as she says in the introduction, is not quite biographical. But the spirit of Charles Collins is there. How glad he would be to see his daughter living out her dreams.

Her songs speak to and for us, saying the unsayable through music. But there’s a challenge in Judy Collins’ songs too. As we headed out into the cold, past the decorated windows of Fifth Avenue, her Christmas song came to mind.

“Come Rejoice” recounts the Nativity story but also reminds us that there are “children who go to sleep on frozen ground’” who must be brought into the gladness of Christmas.

Judy Collins looks at life from both sides and her insights enrich us all.

“New Moon Over The Hudson” is widely available. For more information, go to judycollins.com.

2 Responses to “Songs for the Ancestors”