Slainte! A Stitch in Time

Tommy Makem and the Clancy Brothers.

Every year December swoops in with a blizzard of holiday parties. There are office parties, cookie trading parties, trim the tree parties, cocktail parties, secret Santa parties, and more. But the best I’ve heard of yet is the Ugly Christmas Sweater Party.

Christmas sweaters are actually quite creative and we’ve all probably owned at least one. The problem with them is that they’re only wearable for a week or two and then they get packed away for a year.

Sweaters are the handiest items in a winter wardrobe. They’re warm and snuggly, easy to layer, and compliment just about any fashion statement. Thus they make great holiday gifts. And the best are hand-knit.

When it comes to hand-knitting, sweaters from Ireland’s Aran Islands are the cream of the crop. Not only are they exquisite examples of knitted art, they are also extremely warm, a necessary quality when winter winds blow.

Located off the west Irish coast at the mouth Galway Bay, the Aran Islands group includes Inishmor, the largest and westernmost; Inishmaan, the second largest middle island; and Inisherr, the smallest and easternmost.

Three-hundred-sixty million years ago, a tropical sea covered the Aran Islands and the Burren in Co. Clare, which were connected by a landbridge. As the waters retreated, shells and skeletons of marine creatures were compressed into the limestone that is the geologic makeup of both regions. Retreating glaciers at the ends of successive ice ages left behind a mostly flat terrain except for random huge boulders, some measuring up to 80 feet high, and scoured the rock of precious topsoil.

When people first arrived on the islands some 4,000 years ago, the harsh landscape must have been a daunting sight. But two of the oldest archaeological sites in Ireland, the Iron Age fortifications of Dun Aonghasa on Inishmor and Dun Choncuir on Inishmaan, prove that our ancestors were not only resourceful survivalists but master builders of their day as well.

The larger of the two, Dun Aonghasa, has been called ‘the most magnificent barbaric monument in Europe’ and is a registered World Heritage Site. Perched at the edge of a 300-foot cliff with a sheer drop to the wild North Atlantic, four concentric rings of mortarless stone walls (some measuring 12 feet thick at the base) surround an area encompassing 14 acres. Artifacts found at the site indicate it was a settlement, but the exact purpose of a massive stone slab positioned at the cliff edge is unknown. Some theorize it was used for seasonal Druidic rites such as the Samhain and Beltane bonfires, which would have been visible on the mainland.

Despite being located at the same latitude as icy Quebec, Canada, the Aran Islands have a mostly temperate climate, a blessing bestowed by the warm Gulf Stream that sweeps the coastline. As a result arctic, Mediterranean and alpine plants grow alongside each other, and when the limestone surface has a covering of soil even orchids thrive.

Through the early Christian Era the island austerity appealed to those seeking spiritual enlightenment, and more than a dozen monasteries were built on Inishmor alone. When Cromwell invaded Ireland and gave Catholics the choice of going “to hell or Connacht,” some stalwart souls fled to the Arans and devised ways to survive in the harsh environment.

By mixing seaweed with sand and a bit of precious dirt, the refugees created enough arable soil to cover small plots of land. Enclosed in stone walls that protected precious plants from ocean winds and eventually crisscrossed the islands like lacework, and blessed by the mild climate and abundant rainfall, the walled gardens, plus a few grazing cattle and goats, provided the new residents with food. But the primary Aran Islands dietary staple has long been the bountiful harvest provided by the surrounding seas.

It is here that the Aran Sweater enters our tale. Fishermen who rely on their catch for existence must venture out on the ocean rain or shine. Fortunately, the Aran Islands women became expert knitters. The sweaters they crafted from wool still saturated with water-resistant sheep’s lanolin kept their men comparatively warm and dry.

A romantic, if grim, legend holds that the women knit patterns unique to each island family into their sweaters so that, should a man perish at sea, his body could be identified when it washed ashore. The belief more likely stems from Riders to the Sea, a 1904 play by Ireland’s illustrious author J.M. Synge, who wrote frequently about the Aran Islands. In it, a drowned fisherman is identified by the pattern on his stocking.

Special sweaters were frequently made in the 1920s as garments for a child’s First Holy Communion. Some stitches that have acquired meanings include: Cable (fishermen’s ropes and safety), Honeycomb (luck and abundance), Diamond (wealth and success), Double Zigzags (the trials and tribulations of marriage), and the Tree of Life (hope that the wearer will have long and fruitful life).

Aran Sweaters were not made to sell until the mid-1930s when Dr. Muriel Gahan, founder of the Irish Homespun Society, opened The Country Shop in Dublin, which specialized in Irish crafts. Some of the earliest commercial sweaters are now in Dublin’s National Museum.

The first Aran knitting pattern was published in the 1940s by Patons of England, then by Vogue magazine in 1956. Demand grew, companies began supplying needles and wool, and island women earned some needed income.

A serendipitous connection between Ireland’s music and its knitwear set the Aran Sweater squarely on the world stage. In the winter of 1960 when Tommy Makem and the Clancy Brothers were scheduled to play at Manhattan’s Blue Angel nightclub, Mrs. Clancy sent the boys sweaters to keep them warm. With a stroke of genius, the band’s manager insisted they wear the sweaters for their debut television appearance on the Ed Sullivan Show. Forty million viewers fell in love with the music and the sweaters, and Aran Island knitters were immediately deluged with orders.

While Aran Sweaters did not originally display patterns specific to particular families, The Aran Sweater Market has filled the gap. A search of their website (www.aransweatermarket.com) will reveal if a design has been created for your surname. That would be a Christmas sweater one could wear all year! Slainte! 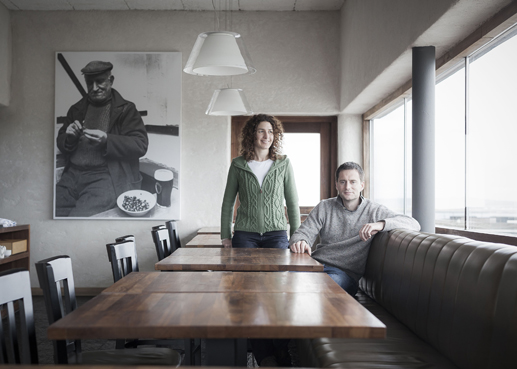 On Inishmaan, Ruiari and Marie-Therese de Blacam have created Inis Meain, which is both a modern boutique hotel/restaurant and an homage to the history and culture of their beloved island. On first sight the stone construction of the purpose built accommodation is immediately evocative of Dun Aonghasa, the Iron Age fortification on Inishmor, but one step inside whisks guests into the 21st century. Each of the five suites features custom made furnishings with cashmere Aran-styled pillows, super king size beds, luxurious bedding, state-of-the-art bathrooms, and a 30-45 foot continuous window providing uninterrupted views of the island and Galway Bay. After a hearty in-room breakfast, bicycles, fishing rods, hiking staves, a guide-map and backpack lunch (including a flask of hot soup!) encourage guests to explore the island. At twilight a 4-course dinner that changes daily is served in the adjoining restaurant that, like the suites, has an expansive wrap-around view window. Island native Chef Ruairí de Blacam’s credo of Elemental Eating insures that each course is an experience of simplicity, beauty, purity and flavor with every ingredient having been fresh caught, raised or grown either on site or by local providers. Called ‘Ireland’s ultimate destination restaurant’ by The Irish Times and recipient of the Overall Best Boutique Hotel in Ireland Award, whatever else you may have planned for your visit to Ireland, Inis Meain Restaurant & Suites is truly worth a detour. For information visit inismeain.com. 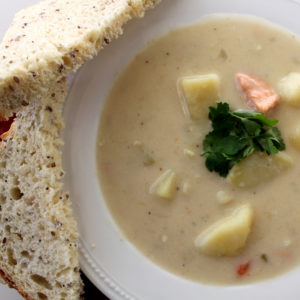 In a large pot, bring 5 cups of water to boil, add potatoes, and simmer until potatoes are cooked but firm (10-12 minutes). Drain potatoes over a large bowl, and save cooking liquid. (DO AHEAD: Let potatoes cool, then refrigerate.)

Next, in a 5-quart pot, melt butter over medium heat. Add bacon, stirring, until bacon browns (5 minutes). Add celery, leeks, and garlic, and cook until vegetables are translucent (6 minutes). Add potato liquid, 1/2 teaspoon salt, and thyme. Bring to a boil over medium-high heat. Reduce heat, cover, and simmer until liquid is tasty (30 minutes). (DO AHEAD: Make stew base and refrigerate up to 1 day.)

When ready to serve, bring stew base to a boil over medium-high heat. Add cooked potatoes, reduce heat to medium, and simmer until potatoes are heated through, then gently add fish and clams. Cover and simmer until clams open and fish is opaque and cooked through (7-9 minutes). Add cream and pepper and reheat to a simmer (do NOT boil!). Season with salt and pepper. Garnish with parsley. Serve with crusty bread. Makes 6-8 servings.

2 Responses to “Slainte! A Stitch in Time”

Leave a Reply to Aine