Kylemore Abbey on the shore of Pollacapall Lough in County Gallway.

Kylemore Abbey was founded in 1920 by Irish Benedictine nuns on the grounds of Kylemore Castle in Connemara after the nuns fled Belgium where they found refuge during penal times in Ireland during World War I. The nuns ran an international boarding school and established a day school for local girls, until they were forced to close the school in June 2010. In 2012, the Benedictine community launched a development plan to preserve the beauty and tranquillity of the place, and to welcome visitors for recreation, education, and renewal.

We Benedictines have been providing places of peace and serenity since our founding almost 1,500 years ago,” Sister Maire Hickey, O.S.B., Abbess of Kylemore Abbey, says as we stand in the center of the expansive restored Victorian gardens below the castle-like abbey. The spectacular Connemara Mountains rise around us. The sun bounces off the deep dark lake. It’s a place out of time.

“The natural world is God’s great gift to us,” Sister Maire continues. “As humans we have a visceral need to connect to nature. Many visitors have told me spending time at Kylemore satisfies a hunger they didn’t even realize they had. Distractions fall away and they experience the joy of creation itself.”

She smiles at Sister Magdalena. “That was Sister Magdalena’s dream when as Abbess she began the restoration of the gardens many years ago.” A daunting task, I think, as Sister Magdalena describes the years of fundraising and the intense work with horticulturists that made a once dead patch of earth bloom again. 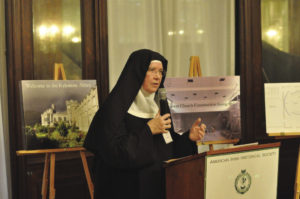 Rescuing Mother Earth. Serving Mother Nature. No wonder women, nuns especially, are among the most committed environmentalists, determined to care for our abused planet so it can nurture us in mind, body and spirit. Sister Maire says that bringing the gardens of Kylemore Abbey back to life was an act of reverence, a way of honoring an ancient Celtic spirituality. “We wish to provide a place of peace and serenity for all,” she says. Where better than in Connemara, which has managed to evade the modern world in so many ways. How many untouched places exist anymore?

I’d awakened that morning as the sun turned nearby Lough Inagh, a few miles from the abbey into a mirror reflecting the sky, trees and mountains of a landscape Frank McCourt called “both beautiful and bleak.” Heart stopping for anyone, but when you are an Irish American with Connemara roots, well, ecstasy is the only word. Here was the same scene my ancestors had looked at for generations. I felt great gratitude to my hosts at Lough Inagh Lodge, Maire O’Connor and her brother, Dominic O’Mhairain, for providing us Yanks with a way to touch the past so gloriously – while offering great accommodations in a beautiful historic house.

Now I felt the same impulse of thankfulness for these Benedictine nuns. Preservation, in a time when bulldozing the old is presented as an economic necessity, is not for the faint of heart. But then, the Benedictine nuns of Kylemore Abbey have a history of toughness.

The original order was established in Ypres, Belgium in 1665 when religious fraternities were outlawed in Ireland. There is a movie called Les Dames Irlandaises which details these Irish exiles who for 250 years served as an emblem of Irish identity and resistance. They educated Irish girls, a subversive act forbidden by the laws of Ireland’s colonial rulers. (The Taliban are only the latest oppressors who fear intelligent women.) The abbey school flourished and young Irish women smuggled themselves into Belgium to study with the nuns. Some stayed on, joining the Order themselves. The abbesses came from Ireland’s great families – O’Briens, Butlers, Lynches, Ryans. Their fathers, brothers, and nephews were among the Wild Geese who served in the armies of Europe. When the famed Clare’s Dragoons captured a British regiment’s flag in the Battle of Ramillies during the War of Spanish Succession, the Irish soldiers brought their prize to the abbey. Thomas Davis wrote a song about the incident to inspire 19th-century Irish patriots. The song, “Clare’s Dragoons,” is now the regimental march of the 27th Battalion of the Irish Defense Forces and popular with traditional musicians. The lyrics go “The flags we conquered in that fray / looked lone in Ypres choir they say / we’ll win them company today or bravely die like Clare’s Dragoons.” 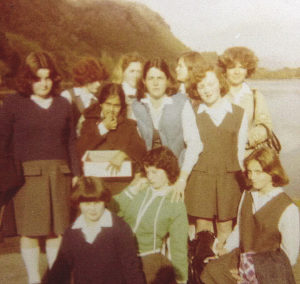 Students at Kylemore Abbey in 1977. Photo courtesy of Mary Reed.

The nuns brought that flag to Kylemore after fighting their own battle when the Germans invaded Belgium in September 1914, bombing their abbey into rubble. Sister Mary Columban wrote an account describing what she and the other nuns did to survive. Imagine these women, enclosed nuns who had not been outside the abbey walls for decades, suddenly on the front lines of a world war. Sister Columban writes about nuns who had done at most five or six turns around the garden walking miles in the thick mud that would make Flanders such a killing field, opening the abbey to refugees, feeding starving children, and tending wounded soldiers. They also sewed hundreds of Sacred Heart Badges that both soldiers and civilians came to see as powerful defensive weapons. The nuns became the “Sisters of the Little Heart,” and members of Irish regiments in the British Army insisted that the nuns themselves pin the badges on their uniforms. Sister Columban says that at crucial times as they moved across the battlefield, Irish soldiers would appear to carry their bundles, commandeer a vehicle for them, or in one case cheer them on with a rousing “It’s a Long Way to Tipperary.”

It was Father Flynn, a chaplain with the British forces, who arranged for them to sail to England where they stayed at a Benedictine convent until they were able to purchase Kylemore Castle – a house with its own dramatic history. Mitchell Henry, an English doctor whose father made a fortune in the cotton trade, built Kylemore Castle between 1863 and 1868. He became an MP from Galway, elected as a supporter of Home Rule. He and his Irish-born wife Margaret made Kylemore a showplace with its 33 bedrooms, grand ballroom, and billiard room, set in acres of formal gardens. They lived there with their nine children, but Margaret caught a fever during a trip to Egypt and died at the age of 50.

After her death and in mourning, Henry built the small gothic church on the grounds but could live at Kylemore no more. The Duke of Manchester bought the castle with his wife’s money and proceeded to gamble away her fortune. Kylemore was to be sold, but no buyers were available and the property was deserted for years. 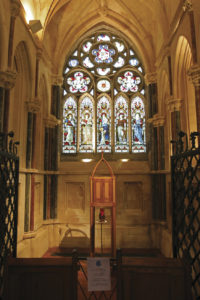 The interior of the small gothic church that Mitchell Henry built on the grounds at Kylemore Castle after the death of his wife Margaret.

Then in 1920 the Benedictines managed to gather the funds to buy Kylemore, which they turned into a boarding and day school. Many of their students came to Ireland from other countries throughout the world. Never before had educating girls seemed more important than at the birth of the new Irish state.

Women had played such a central role in Ireland’s liberation that surely they had earned the right to take a prominent place in the Irish government and society. After all, Countess Constance Markievicz was the first woman elected to the British Parliament and the first Minister of State in Europe. Educated women would be needed. Girls’ schools run by nuns sprang up all over Ireland. Even after the government reneged on the promise of equal rights for women, the commitment to educating girls continued – a mission which Kylemore School carried on until June 2010. The nuns are now looking for a way to continue this work anew. “Education comes from the Latin meaning to lead, we want Kylemore to continue to be a place to help people make their own journey into the light,” Sister Maire says.

This June, past pupils of the school gathered at Kylemore Abbey to share memories and to help with the transition of Kylemore from a school to the Center for Retreats and Educational Programs. The stories they shared were light-hearted. Sharon Molloy, a 1990 graduate, who now runs a pub in Barcelona, remembers the fun of a pea fight in the school dining room. “I stretched the rules to the limit and loved every minute of it.”

Lydia O’Farrell Little, class of ’89, who writes a fictional series called K-Girls based on her experiences at the school, recalled the kindness of the operator at the post office who put through the Abbey’s calls. One night, after a homesick Lydia cried her goodbyes to her parents, the operator Betty, came on the line and consoled the young girl. Lydia remembered that when she didn’t like the food she photographed some of the dishes to show her father. But her father says that he would have been happy to have half of the food when he was a boy. Patricia Martinez of Madrid, Spain, ’86, remembers putting on plays in the hall. While Aileen Morgan, ’85, a New York singer and songwriter, says as an 11-year-old, she was startled by “the majestic and magnificent castle in the fog with the mossy brown green and gray craggy mountains behind and the reverent dark still lake in front. I was not sure if I were in a movie or in reality.” It’s an image she has never forgotten. For Claire Corcoran Stephling, ’76, one of three sisters who came to Kylemore from New York, says the school experience meant the kindness of the Benedictine nuns, the bond with students from all over the world, the spiritual enrichment, and the natural beauty.

And then in a wonderful closing-of-the-circle way, Daniele de Ponthiere, ’65, recalled her journey from Belgium to Kylemore. No bombs exploded on her way but it was a long cold trip to a place where she did not speak the language. But she did understand Sister Jarlath’s welcome and the boiled eggs with brown bread she offered.

At the end of our time together the Sisters take me through the rooms of the castle. “As you can see,” says Sister Magdalena, “much work needs to be done. We want Kylemore to be a warm, welcoming, comfortable place. Hospitality is a central Benedicting virtue,” she says.

For more information, go to www.friendsofKylemoreAbbey.com.

Leave a Reply to Kathleen

℘℘℘ A journey through the native Irish-speaking areas of Ireland These are the words of welcome that Irish...

Thomas “Tom” Keaney is the chief strategy officer for Rubenstein, a strategic communications and reputation...