Hollywood actor Jonathan Rhys Meyers was among those honored at this year’s Irish Post Awards on October 24 in London.

Hosted by broadcaster Eamonn Holmes, the black tie event at the Hilton, Park Lane, which was attended by 700 guests, honored a number of exceptional people including Rhys Meyers, who received this year’s Legend award for his contribution to the film and entertainment industry.

The Golden Globe winner was presented with his Legend Award by Lord of the Dance creator Michael Flatley. 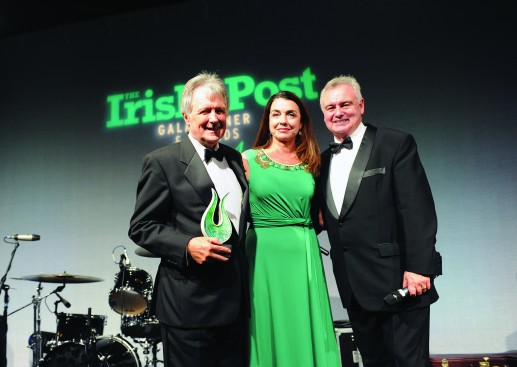 “What a star you are,” Flatley said.

“You don’t get to the top of the world in anything without lots of talent, I suppose a little bit of luck, but mostly a mountain of hard work. And of course the most handsome guy in Hollywood is from Ireland.”

Accepting his award Jonathan said: “I’ve had so much rejection. I went to Hollywood and was told no, no, no, then some people said yes, then some people said no. I’ve had ups and downs, I’ve fallen down as much as I’ve gotten up. I think you do that in life. But I’ve always remembered at the core of it that being Irish is special.”

The band The Script, actor James Nesbitt, and music legend Chris de Burgh were among the stars honored at the...

Jonathan Rhys Meyers is going “hardcore.” Which means the Dublin star of TV shows like The Tudors and movies such...

Two accomplished Irish artists – a musician and a dancer – are trying to cross over into movies. World-renowned...