Two children of the Irish diaspora may well come together to tell the story of a recently deceased American icon.

Oscar winning director Danny Boyle (Trainspotting, Slumdog Millionaire) is currently planning to shoot a biopic of legendary Apple designer and executive Steve Jobs. Boyle grew up in England, where his parents settled after emigrating from Galway. Christian Bale had been rumored to play the role, but the temperamental Dark Knight actor dropped out, leaving a giant hole to fill.

“Sony has moved quickly to find the man to portray the late Apple founder Steve Jobs,” Variety recently reported, adding, “Michael Fassbender is in early talks to play Jobs in the Sony biopic… based on Walter Isaacson’s biography.” Rumors are also swirling that Seth Rogen will play Apple co-founder Steve Wozniak, with Aaron Sorkin (A Few Good Men, Newsroom) on board to write the screenplay.

“It’s a little like writing about the Beatles,” Sorkin has said. “There are so many people out there that know him and revere him.”

Irish-born actress Roma Downey and her husband Mark Burnett are producing a new TV show that profiles people whose prayers have been answered. The show, not yet titled, is being shot for the TLC network. “Mark and I feel passionate about providing projects that show people’s lives in positive and uplifting ways,” said Downey, who is also executive-producing the project with Burnett. “This is a wonderful opportunity to work with TLC and host a series that will inspire and encourage viewers to remember that even in the worst circumstances prayer can lead to divine intervention.” Network officials say the series will follow people who claim to have been blessed by “modern-day miracles, incredible twists of fate, and phenomena that logic and science cannot explain.”

It’s not surprising that Downey and Burnett would continue to explore extraordinary themes of faith after their TV blockbuster “The Bible.” That was followed up by “Son of God.” They are also working on an NBC miniseries called A.D. and a new version on the biblical epic Ben-Hur.

Downey, of course, played a heavenly character on CBS’s “Touched by an Angel.”

“TLC is always looking for remarkable, heart-warming, and eye-opening stories,” said TLC general manager Nancy Daniels. “This project, and our fantastic partnership with Roma and Mark, will deliver a television experience that connects with the hearts, minds, and faith of our viewers.” Have you been blessed by a miracle? A website has been set up for you to tell Downey and Burnett your story for the show, slated to air in 2015. 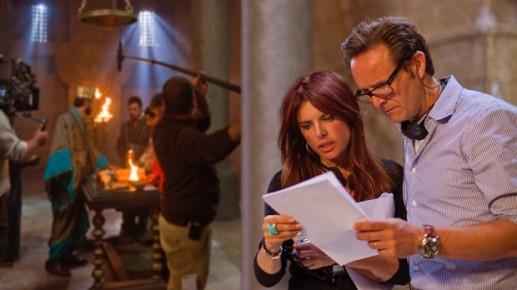 Burnett and Downey on the set of “The Bible” miniseries.

Downey and Burnett have also launched an initiative along with Johnnie Moore and Chris Seiple to raise 25 million to help Christians in Iraq and Syria. In late October, Downey said in an email to Irish America, “We must hurry to raise this money  as next weeks rain will soon be snow and winter is coming. As you know the clock is ticking and we must act now. Evil thrives when good men do nothing. We can and must help.”

Their “Cradle of Christianity Fund” is being administered by the Institute for Global Engagement (IGE), a leader on international religious freedom issues which primarily works in east Asia.

The new year brings with it another sequel to Taken, Liam Neeson’s action-packed franchise. What goes wrong this time for poor, beleaguered Bryan Mills, with his “particular set of skills”? His daughter and wife have already been kidnapped (Taken 1 and 2).  Well, it seems this time around, Mills is being framed for a murder that (shockingly) he did not commit. Neeson clearly enjoys the fun and box office receipts that come with these violent, popcorn thrillers, but it would be nice if one of the five or six movies he will also be appearing in in 2015 (Ted 2, Entourage, Run All Night) were a little more quiet and introspective.

February 2015 is going to be an Irish month at the movies, starting with Stephen Rea’s latest film Out of the Dark.  Rea – who was nominated for an Academy Award for his stunning turn in The Crying Game – stars alongside Julia Stiles and Scott Speedman in this thriller/ghost story set in South America, where a young family is trying to start a new Things get complicated, then downright terrifying, when ghosts force them to confront more earthly family secrets.

Perhaps the most anticipated forthcoming Irish movie is ‘71 starring Irish actress Valene Kane and English-born Irishman Jack O’Connell. ’71 is a gritty look at the darkest days of the Troubles in Northern Ireland. O’Connell – whose father was born in Kerry – stars as a British soldier separated from his troops in hostile Catholic territory. The film features a wide range of Irish talent, including Newry-born Kane, who has already turned heads in Irish director Ivan Kavanagh’s The Fading Light. Kane also stars in the BBC series “The Fall” and will also be seen in the forthcoming big-budget adaptation of Frankenstein, to be directed by Scotsman Paul McGuigan and starring James McAvoy and Daniel Radcliffe. 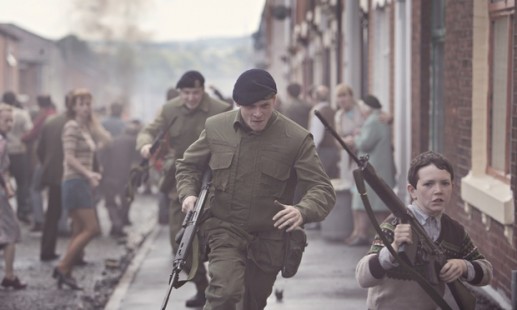 Jack O’Connell in a scene from the upcoming film ’71.

As for O’Connell, you can see him on Christmas Day in the Angelina Jolie – directed film Unbroken, in which he stars as Louis Zamperini, an Olympian who was later stranded at sea and imprisoned with an Irish-American partner during World War II. Domhnal Gleeson will also be seen in Unbroken.

Also in February, there’s the frontier drama Jane Got a Gun starring Natalie Portman and Ewan McGregor and directed by Gavin O’Connor, best known for the boxing epic Warrior and the Irish American cops drama (featuring Colin Farrell) Pride and Glory. Jane Got a Gone features Portman and Joel Edgarton (The Great Gatsby) as a couple trying to live a peaceful life but unable to avoid the violence of a brutal Wild West gang led by McGregor.

Violent in a very different way – and timed for Valentine’s Day – is the much-hyped 50 Shades of Grey adaptation, starring Down native Jamie Dornan.

Kenneth Branagh continues his evolution from Shakespearean thespian to blockbuster maestro. The Belfast-born Branagh – whose excellent work directing the comic book epic Thor surprised some critics while also making tons of money – will direct a new version of Cinderella slated to hit theaters in March.  English actress Lily James will take on the title role, joined in the all-star cast by such luminaries as Cate Blanchett, Stellan Skarsgård, and Helena Bonham Carter. Look for Cinderella in theaters March 15.

That same week, Cillian Murphy and Brendan Gleeson star in the seafaring epic In the Heart of the Sea, directed by Ron Howard and based on the best-selling book of the same title by Nathaniel Philbrick. The film tells the harrowing story of a ship attacked by a whale in 1820 and the crew’s desperate efforts to stay alive.

Another harrowing tale of survival based on a bestselling book is Room, currently being directed by Irishman Lenny Abrahamson whose recent rock-n-roll comedy Frank featured Michael Fassbender, mostly in an oversized fake head, which left more than a few critics and fans scratching their own heads. Room should be a different kind of movie entirely.  The book, by Irish writer Emma Donoghue (who is also writing the screenplay) is about a mother and son who have been abducted and their efforts to stay alive long enough so that they can seize an opportunity to escape. Room has already begun shooting and should be in theaters in late 2015 or early 2016.

Finally, Antrim native James Nesbitt will be having a busy winter. Nesbitt stars alongside Aussie-Irish actress Frances O’Connor in the Starz network drama “The Missing.” The show revolves around the devastation a husband and wife face when their son goes missing while on a trip to France. The eight-part series will run to the end of 2014. Nesbitt – who has appeared in Match Point and The Way as well as Irish movies such as Hear My Song and Bloody Sunday – will also be reprising his role in the latest entry in The Hobbit series of films come Christmas time.  Nesbitt portrays middle earth dwarf Bofur in the upcoming film The Hobbit: Battle of the Five Armies, which sports a massive cast including Ian McKellan, Cate Blanchett, Orlando Bloom and Irish actor Aidan Turner. Look for Battle of the Five Armies film to hit U.S. theaters on December 17.