“Recognition from Ireland for the Irish abroad is always very special. I feel I am in very distinguished company,” O’Dowd, who was honored for his work on the Northern Ireland peace process, said upon receiving the news.

The awards, presented in October, included a diverse array of talented men and women from places as far away as Australia and Russia to the U.S. and England. 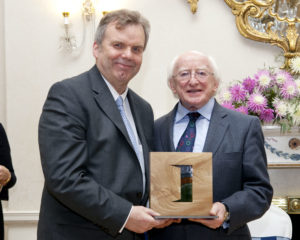 Among the honorees are Australian-born author and playwright Thomas Keneally whose work, both fiction and nonfiction, touches on the Famine and emigration. This year also featured the first ever Russian awardee, Avril Conroy. She is an important figure in the Russian business world as director of regional sales for Rosneft, one of Russia’s biggest oil companies. Speaking of the 10 awardees, Charles Flanagan, minister of Foreign Affairs and Trade said, “We owe a huge debt of gratitude to these remarkable people for what they individually contributed to Ireland, to the Irish abroad and our international reputation.”

The Distinguished Service Awards have been given since 2011 and have been influential in shining a light on the Irish diaspora around the world. Jimmy Deenihan, minister for Diaspora Affairs, summed it up nicely saying, “Taken together, this group shows diverse talents: cultural awareness, business acumen, humanity, far sightedness and, in different ways, a concern to make the world a better place.”