The village of Carna, Co. Galway.

A village in County Galway uses DNA testing to connect with people whose ancestors immigrated to Portland, Maine and other places in the U.S.

Maybe I am so excited about the partnership between the Carna Emigrants Centre and the Maine Irish Gaeltacht Project because I spent almost 40 years searching for my Irish ancestors. I spooled through miles of microfilm, asked vague questions at the doors of parish houses throughout Ireland and then was completely overwhelmed with the floods of information that hit the Internet. So much and so impersonal. But now I only have to walk into the old Carna National Schoolhouse with its glorious views of the sea, settle myself in a room modeled on an Irish country kitchen, share the results of the analysis I did on Family Tree DNA with a real person, then sit by the fire as I not only learn about the past generations of my own family but very likely meet present day cousins.

If you have Connemara connections, as I learned I did, and as so many Irish Americans do, this experience can be yours. Though the physical Centre is still in the early stages of development, the data that allows family matches to be made is up and running now. The impetus of this project came from the Irish community in Portland, Maine where, as Maureen Coyne Norris, one of the directors of the project told me, “Ninety percent of us come from Connemara and until not so many years ago the Irish language was spoken here.”

The community has always been proud of native son John Ford, whose real name was Feeney. A relative of his, Margaret Feeney, has for many years helped members do genealogical research and create their family trees. Using traditional methods she developed a database of 130,000 names, most connected with the Connemara Gaeltacht, which stretches from Bearna/Spiddal along the west coast of Galway Bay to the area around Carna, Kilkeerin and the Lettermore Islands. Then in 1997 the threatened destruction of St. Dominic’s, for 175 years “the Irish church” in Portland, galvanized the community. They campaigned to save St. Doms, taking their case all the way to the Vatican. But the parish was closed. So they lobbied the city council to buy the complex and allow the church building to become the Maine Irish Heritage Center. They won. The center, which opened in March 2002, now has an extensive library that in-cludes genealogical works and schedules events such as lectures, ceilis, book clubs, Irish Masses, weddings, music sessions as well as holding the annual Claddagh Awards Dinner. Now Margaret Feeney’s genealogical project had a home. Then Maureen and other Center members became fascinated with the possibilities of DNA testing. Three hundred of them used Family Tree DNA to assemble profiles that showed how Irish clans in Portland intersected. Then Maureen thought, why not extend the testing to people in Connemara, where most Portland families had originated?

“She swabbed a whole lot of us,” Mairtin O’Cathain, journalist, radio presenter and Chairman of the Carna Immigrants Centre Committee, says.

“I was skeptical at first,” says Joe Cooke, fellow Committee member and a television presenter. After all Joe knew his relations and was a genealogist himself who had helped many visiting Irish Americans find theirs. What could saliva add to his knowledge? “Then Maureen called me with my results. She cross indexed me with the database and told me about cousins right here in this area that I didn’t know were related to me.”

I am sitting with Joe, Mairtin and Susan O’Cathain and another Committee member Josie Curran in the Carna Bay Hotel, looking across at the schoolhouse that will one day be the Centre.

“We will also have an Emigrant Remembrance Garden too and a monument. Perhaps an elevated lantern as a symbolic call to the Diaspora wherever they be,” Mairtin says. “But the Centre will also be a Community Hall, a gathering place for the parishioners here.”

Neighbors and strangers will be united in that most enduring of human experiences – telling stories by the fire.

“Growing up, every evening one or two people would appear in our kitchen,” Mairtin remembers.

“No knock. They would just take a place by the hearth and start to talk – hours and hours of it. And now I realize that as well as commenting on the events of the day and speculating on the future, they were passing on the old tales, family histories, who married who going back generations, weaving our very identity, giving me a sense of who I was. All of this in the Irish language, of course, with singing and dancing in the Seán-nós style to round out the evening.” 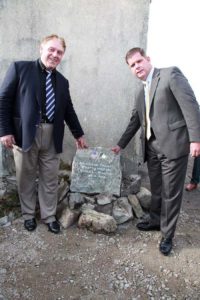 And though Mairtin and Joe checked e-mails on their cell phones, and the young people passing the hotel would have fit in on any city street in the U.S., in this part of Connemara where 96 percent of the people still speak Irish and are connected to their heritage, a sense of the eternal Ireland is so strong that I felt I was now part of the circle Mairtin had described. This is the kind of connection the Centre will provide, one that Carna is uniquely suited to offer.

As Breandán Ó Caollaí, Consul General of Ireland in Boston, who himself studied and taught in the Connemara Gaeltacht, says “the area around Carna is reputed to offer the most authentic experience of traditional culture to be found not only in Ireland but in all 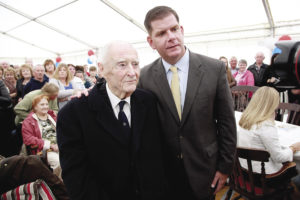 of Western Europe. Here the singers, storytellers and dancers have a deep-down knowledge of the Gaelic tradition that they are passing on to the next generation. It’s living. It’s real.”

Carna native Joe Heaney, the renowned Seán-nós singer, is said to have known more than 500 songs – 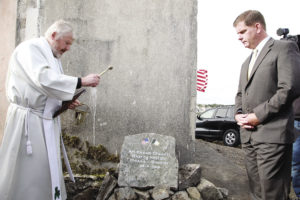 TOP: Martin J. Walsh, Mayor of Boston unveils the Foundation Stone for the Emigrants Commemorative Center in Carna in Connemara in September. Project chairperson, Máirtin Ó Catháin (left) with the mayor. Mayor Walsh’s late father, John Walsh was a native of Carna and his mother Mary is a native of the neighboring parish of Ros Muc. Both parishes are in the Gaeltacht – the Irish speaking area of Ireland. CENTER: Local parish priest, Fr. Padraig Standún blesses the Foundation Stone as Mayor Walsh of Boston looks on. BOTTOM: Former Taoiseach Liam Cosgrave greets Mayor Walsh of Boston at the Emigrants Commemorative Center Foundation ceremony. Mr. Cosgrave went to primary school for a term in the old school building on the site in 1930. Now 94, Mr. Cosgrave travelled from Dublin for the occasion.

most learned while he was growing up in Carna. Though he died in 1984, a yearly festival in his honor features local singers such as Johnny Mairtin Larry McDonough who carrys the tradition forward. I saw teenage brothers John and Brendan Joyce, All-Ireland champion Seán-nós dancers perform in a friend’s living room. The music is a part of life as it was for all of our Irish ancestors. So even if you don’t have Connemara roots, you will be connecting with your own past by visiting here. And you may find yourself guided by your ancestors.

It can happen to you too. Listen to this. An author friend in Chicago, Mary Terese Kanak, knew her Irish grandmother was from Rosmuc, only a few miles from where I was sipping tea with the Carna Committee. Her name was Ann Nee. Two summers ago Mary, her husband and two daughters went to Ireland for the first time to look for the place where her grandmother had been born. She was directed to the home of Sean Nee who might have some information about her family. But he was out in the fields. His wife, though pleasant, was a little hesitant at finding these strangers at her door. Then Mary said she was from Chicago. Mrs. Nee said her sister lives there. Did Mary by any chance know Ann French? Mary was astounded. While she was waiting for her plane in O’Hare Airport she had been chatting to the woman next to her. You guessed it. Ann French, who was expected there tomorrow. “When Sean came in,” Mary had told me, “we were already part of the family. He took me across the field and over a rock wall so I could stand in the rooms of what was my grandmother’s childhood home.”

Now I’ve always loved the story but couldn’t remember all the details so I texted Mary. She responded immediately with the exact location of the house, which I relayed to the group. “Ahh, she’s my cousin,” Joe Cooke says. “My mother’s people were Nees from Rosmuc.” He traces out the connections which leads Mairtin to say, “I’m related to her too.”

And so the conversation went as the day drew in and we wove a transatlantic tapestry of who we were and who we are.

Did I know White House Chief of Staff, Denis McDonough, has Carna roots? And so does former Maine Governor John Brennan who helped start George Mitchell’s career by appointing him to the Senate? Portland’s present mayor is also a Brennan, Michael. And was I aware that both parents of Boston Mayor Marty Walsh were born in the area – his father John in Callowfeenish and his mother Mary O’Malley in Rosmuc. I did know Mayor Walsh’s story having read about it in Irish America. The group then describes the emotional moment when Marty Walsh dedicated the foundation stone of the Carna Emigrant Centre in September 2014.

“Bonfires lit up the hills and the whole place was covered in American flags and signs that said ‘Fáilte Abhaile, Mayor Marty Walsh’ and ‘Welcome Home!’” Mairtin remembers. Over 500 people came to the dedication of the Emigrants Centre cornerstone and another 1000 to the reception in Screebe House, a sizeable portion of the population of the area. Marty Walsh had his mother by his side and was surrounded by cousins as he greeted the crowds in Irish.

Reporting on the visit, The Boston Globe found that the most affecting moment came when, during an Irish language Mass, schoolchildren dramatized an emigrant’s journey. “Walsh’s mother, who left Rosmuc at age 17, sat in the front pew and wiped tears from her eyes,” the newspaper said.

During his official tour of Ireland Mayor Walsh concentrated on economic development and efforts “to build upon a historic bond and build new dynamic partnerships with 21st century Ireland.” He traveled to Donegal, Derry, Belfast and Dublin and attended the All-Ireland Hurling Final seated between An Taoiseach, Enda Kenny and President Michael D. Higgins. But my friends in Carna are sure the highlight for Walsh was bringing his mother home again to share his hero’s welcome. “You know she never lost her Irish,” Mairtin says.

“I see the Mayor’s mother at many functions in Boston,” said Consul General Ó Caollaí. “It just wouldn’t be courteous to greet her in English.”

The visit has had an effect in Maine too. “When we started the project,” Maureen Coyne Norris says, “everyone hoped they were connected to John Ford. Now they want to be related to Marty Walsh.”

For more information on the Gaeltacht Project go to www.maineirish.com.

For the Centre go to www.carnaimmigrantscentre.com.

Leave a Reply to Colleen Zinck