Walter Crane (1845-1915) illustrations for the popular nursery rhyme “Sing a Song of Sixpence.” Crane was born in Liverpool.

In one of my favorite movies – Michael, a tale of Michael the Archangel visiting earth to help a few folk find their way in life – a particularly sweet scene shows the central characters all enjoying slices of pie in a small-town eatery. When Scots-Irish Andie MacDowell’s character is revealed to love pie, Michael (John Travolta) insists she sing her “pie” song.

It goes like this: “Pie, pie, me oh my! Nothing tastes sweet, wet, salty and dry, all at once, so well as pie. Apple! Pumpkin! Minced an’ wet bottom! I’ll come to your place every day if you’ve got ’em! Pie, me oh my, I love pie!”

I couldn’t agree more. Give me a slice of pie, savory or sweet, any time, any day, and I am one happy gal.

Mom gets the credit for my appreciation – okay, love – of all foods Italian, but pie as we know its myriad versions simply isn’t an Italian specialty, and my love of pie is yet another blessing from my Irish dad. In fact, making an apple pie was the first non-Italian culinary skill my mother learned.

Dad’s favorite dessert was apple pie. It was only a few years ago that I realized his penchant for the dish could be traced back to the foods prepared by his Irish mother.

We’ve all heard the phrase “as American as Apple Pie.” Turns out, neither apples nor pie are American in origin. Both are English to the core. And as both the United States and Ireland have long histories of English settlement, both countries adopted numerous English foodways.

The Brits win the prize for creating what we know as “pie.” They even came up with the word. But I’m getting ahead of the story.

Culinary historians theorize that enclosing food inside dough has been going on since the Egyptian New Stone Age around 9500 BC when humans began to gather and grind seeds into a flour-like substance. It took a few millennia to get the method down pat. Drawings of nuts, fruit and honey wrapped in bread dough were found on the tomb walls of King Ramses II who ruled Egypt from 1304-1237 BC.

The Greeks get the credit for inventing pastry by adding fat to a flour-water paste. In his plays, Aristophanes (5thc. BC) mentions sweetmeat pastries filled with fruit. They must have been very popular, as records differentiate a pastry cook from a baker.

As with many other things adopted from their neighbors across the Aegean Sea, the Romans improved on Greek pastry. In his 1st century cookbook, Apicius includes recipes that required wrapping ‘pastry’ around meat to seal in the juices during cooking. The practice of cooking food in pastry spread through Western Europe with the expansion of the Roman Empire.

By the Middle Ages, no feast was complete without a course featuring pastry, some of which boggle the imagination. Called a soteltie (subtlety), these masterpieces were created to surprise and delight. Remember the nursery rhyme containing the line ‘four and twenty black birds baked in a pie’? That the birds in this beloved kiddies’ jingle flew forth and began to sing once the pastry was opened may seem a contrived bit of fiction, but it’s not. How this trick was engineered is quite simple: a cooked blackbird (or magpie) pastry was placed inside a much larger pre-baked pastry shell. Just before serving, live birds were placed in between the two pastry walls and a pre-baked lid was set on top.

In a Medieval noble’s home, the main meal was the principal event. This was especially true when royalty came to call. With little more amusement than perhaps a morning spent hunting, dining was the chief entertainment. Strolling lute players and singers, meat carvers wielding knives as deftly as jugglers, and elaborate edible fantasies – like live birds springing at first cut from a humongous pastry – marked a household’s sophistication and wealth.

Curiously, it is the nursery rhyme bird that gave us the very word “pie.” At one time a Magpie Pastry was as ubiquitous as a modern chicken pot pie. It appeared at meals so frequently that the dish was simply referred to as “pie” since everyone already knew what bird the pastry contained. Eventually all crust-encased dishes were called ‘pie’ as well, regardless of their contents,

The Oxford English Dictionary records the first use of the word pie in 1303AD and gives this additional explanation: “The origin for the word pie is uncertain and no other related word is known outside English.” It suggests that the word is identical in form to the same word meaning “magpie.” The connection is that a pie containing mixed fruit, vegetables and/or meat is similar to the colorful odds and ends that a Magpie picks to adorn its nest.

When the English invaded Ireland, the Anglo landlords brought their love of pie with them. Not a population to let a good thing go uneaten, the Irish embraced pies wholeheartedly, adding their own favorite ingredients to the mix. From spring through fall, rhubarb is baked into so many pies that it is called “the pie plant.” Blackberries found abundantly on the hedgerows lining most country roads make a fabulous late summer pie filling. When autumn arrives and ancient apple orchards that date from the days of the Druids are bowed down with fruit, the aroma of freshly baked apple pies wafts from kitchens throughout the island. Lemons are not native to Ireland, but there is scarcely a pub in the land that doesn’t offer a tangy lemon meringue pie on its menu. And in the savory department, Ireland’s ubiquitous Cottage Pie or Shepherd’s Pie has used mashed potatoes instead of pastry to cover a mix of minced roast meat, gravy and veggies since the mid-eighteenth century.

Similarly, when English emigrants settled the early American colonies, they added New World foods to the long list of items that could be baked in a pastry. Tart cranberries could be mixed with maple syrup and baked alone or added to a traditional apple pie. But one particular indigenous plant – pumpkin – was eaten so often that it spawned a witty ditty: “We have pumpkin at breakfast and pumpkin at noon; we eat so much pumpkin we shall be undone.”

On the great plantations of the Old South, many owned by industrious Irish Americans like the O’Haras in the epic novel Gone With The Wind, another native plant found its way into a pastry crust – sweet potatoes. Mixed up with eggs, spices and a bit of rum, it made a fine finish to a celebration dinner.

Without doubt pie will be the grand finale to the Thanksgiving feast in every home come November, and whether the choice is ‘apple, pumpkin, minced or wet bottom’ it’s a fair bet that everyone at the table will be saying “I love pie!” Sláinte!

NOTE: What makes a pie is the pastry, which is basically just flour and water bound together by a fat, and every cook has a favorite. Some bakers swear that lard produces the flakiest crust. Others will only use a solid vegetable shortening, and still others insist on butter. Recently, I began using olive oil. The resulting pastry is more crisp than flaky. Plus it’s much healthier than the other options, and is vegan to boot.

Mix the dry ingredients together in a large bowl, then set aside. Stir the olive oil and water together in a small bowl, then pour into the flour mixture. Using a fork combine the wet and dry ingredients. Divide into two equal portions, wrap each in waxed paper and refrigerate for one hour. While the pastry is chilling, prepare the pie filling. When the filling is ready, remove the dough from the refrigerator and roll as you would any other pastry. Makes a top and bottom full crust. Alternatively, you can cut the second pastry into strips for a decorative lattice top crust. 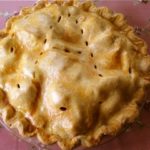 Peel, core and slice the apples (I prefer chunks rather than thin slices). Mix sugar and spices, and combine with the apples in a large bowl. Drizzle with lemon juice and toss together. Set aside while you roll out the pastry. Preheat oven to 450F.

Make two pastry circles, each approximately 2-inches larger than the diameter of your 8-inch pie pan. Place one circle in the pie pan and dust with a bit of flour (this will absorb some of the fruit juices and prevent the bottom crust from becoming soggy). Pour the apples into the pastry shell, dot with bits of butter and place the second circle on top. Tuck the overhanging top crust under the edge of the bottom crust and pinch all around to seal. Make a few slits in the top crust to let some of the steam escape. Mix egg yolk with cream and ‘paint’ the crust all over. Sprinkle lightly with sugar.

Place pie on a rimmed cookie sheet (to keep any overflowing juice from dripping on the oven floor) and bake at 450ºF for 10 minutes. Reduce heat to 350ºF and continue baking for approximately 30 minutes until the crust is golden and the apples can be easily pierced with a testing wire or knife. Remove pie from oven and cool for several hours before serving. Makes one 8-inch pie. 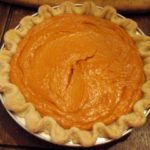 Line an 8-inch pie pan with one 10-inch circle of pastry, turn under excess and crimp edges. Fill with dry rice and ‘blind bake’ at 350ºF for 15 minutes. Remove from oven, pour out rice, place on a wire rack and cool completely. Glaze cooled pie shell with orange marmalade. Set aside while you prepare the filling.

Mix all the remaining ingredients thoroughly adding light brown sugar and spices to taste. Pour into pre-baked pastry shell. Place on a rimmed cookie sheet and bake 30-40 minutes in a pre-heated 375ºF oven on the top shelf (pastry browns slower). Test w/ a knife to see if filling is done (when knife is removed, it should not have any filling bits clinging to the blade). Remove pie from oven, place on a wire rack until completely cool before serving. Makes one 8-inch pie.

With the New Year in mind, Edythe Preet writes about Robert Burns: Scotland’s Immortal Bard. ℘℘℘ In case any...

The therapeutic benefits of seawater and seaweed baths, as well as seaweed as an important food source, is explored by...

Sláinte!
Music: The Food of Love

With Father’s Day in mind, our columnist writes about her own dad, “a true Irish bard.” ℘℘℘ I live with a...