A project eight-years in the making makes its U.S. premier tonight. Northern Irish filmmaker and artist Marcus Robinson’s award winning, mixed media documentary “Rebuilding the World Trade Center” debuts on the History Channel at 6:00 pm Eastern and Pacific. The documentary, which chronicles the construction of One World Trade Center from laying the foundation to the topping of the spire, was screened on Channel 4 in the U.K. in 2013 to critical and public acclaim.

On September 3rd at a screening event on the 68th floor of 4 World Trade Center, Robinson was presented with a BAFTA Television Craft Award for Photography – Factual by the British Academy of Film and Television Arts New York. Remarkably though, the project isn’t actually complete, and the two-hour History Channel special is just one part of a far greater artistic endeavor that mixes painting, sketches, film and digital imagery into a complete installation designed to open in conjunction with the completion of the entire World Trade Center site.

As with any work of this scale, Robinson is supported by numerous organizations, including Tourism Ireland, History Channel, BAFTA, Invest Northern Ireland, NI Bureau, and is being produced by Lion television. Gary Hanley, head of Invest Northern Ireland Americas said Robinson represents a new era for creative artists in Northern Ireland (even though he’s working in the U.S.). “His vision, tenacity, and determination is yet another example of the world class talent and creativity of our people,” he said. 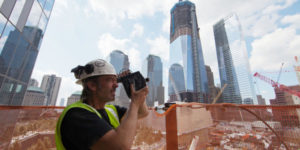 “It’s a labor of love and it’s a labor of total commitment,” Robinson says in the film trailer. He arrived on site in 2006 and set up 13 time-lapse cameras around the site to document its progress. At first though, he was unsure how his project would be received by the construction workers he sought to capture in action.

“I didn’t know how guys were going to react if I turned up with pencils and paper…. And I was drawing and there were three towering figures above me and they all looked down and seemed interested in what I was doing and one guy said, ‘look, how would I get a drawing like that?’”

Robinson, who has created several documentaries on other large-scale construction projects, focuses as much on the site, its memory, and the reconstruction process as he does on the workers who are laboring to erect the edifice. Doing so, he presents voices not often heard in the debates around national consciousness, collective grief, and the symbolism of the site. But Robinson wants viewers to know they’re a part of it, from ironworkers to carpenters.

“They are healing a scar in the bedrock of the city, in its skyline,” he says. “And in many ways what they are doing is part of a much greater act of rebuilding and healing.”

“Rebuilding” focuses heavily on their personal stories too, many of which include a family history of construction work. For a lot of workers, their parents or grandparents helped build the original World Trade Center, giving this project a sense of collective closure and enduring legacy.

“We work out in the rain, the sun, the snow, and for the rest of my life or my children’s lives, I can say, ‘You know grandma or mommy helped build this building,’” Chantelle Campbell, a carpenter with Rogers and Son, says in the film.

But it’s not all serious, and Robinson captures the difficulty and comedy of constructing such a high profile building. The trailer for “Rebuilding” has Scott Zelenak, chief of surveyors for the Port Authority at the World Trade Center, touching on the constant struggle between engineers and designers.

“We’re talking about four or five of the world’s tallest buildings in one spot. The architects, the designers, the things that they are trying to do, are fantastic, believe me it’s utterly beautiful. But to be the guy who has to put it together? Is a helpless hopeless task,” he laughs.

“I don’t know how people go home at the end of the day and say ‘I just put up a 200-ton column.’ Where else does that happen?”

Only in New York.

Leave a Reply to Anita Murphy