An Irish-American Family Tradition Lives On.

Now, one might think that getting married for the first time at the age of 54, I would have wanted to have a small, intimate affair like my husband first suggested, but I had never imagined anything other than marrying in Holy Name of Jesus Church.

Like most little girls growing up in the 1960s in Holy Name of Jesus Parish in Brooklyn, I dreamed of one day marrying in Holy Name Church, just as my classmates and best friend, Eileen O’Brien had. Baptized in this church, making my First Holy Communion, First Penance and Confirmation here and graduating from Holy Name Elementary School, my vision was not much different than any of my friends’. After all, largely comprised of Irish-American, German-American and Italian- American families, in a six-square-block hamlet tucked away between Greenwood Cemetery and Prospect Park in the Windsor Terrace section of Brooklyn, this parish was a veritable melting pot of European emigrants marrying Americans, but all sharing in the Catholic faith.

My family was deeply rooted in this parish, dating back to around the time the church was built in 1878. For my mother’s Irish family, the Molloys, Sheas, Maloneys, Mulvaneys and Reillys, Holy Name was home. In those days, we did not identify ourselves by our neighborhood as much as we did by our parish – we were “from Holy Name.”

Both of my Irish immigrant great-grandparents on my maternal grandmother’s side, John Molloy and Margaret Shea, had met at the wedding of Margaret’s brother John, and John Molloy’s first cousin Mary. The wedding was at Holy Name, where John and Margaret would also marry on April 12, 1891. When my maternal grandmother, Mary Molloy, was born, she was baptized there, received her Sacraments there, and attended the attached Holy Name School. When she married, she married Cavan-born Jim Maloney on September 8, 1921 at Holy Name too. 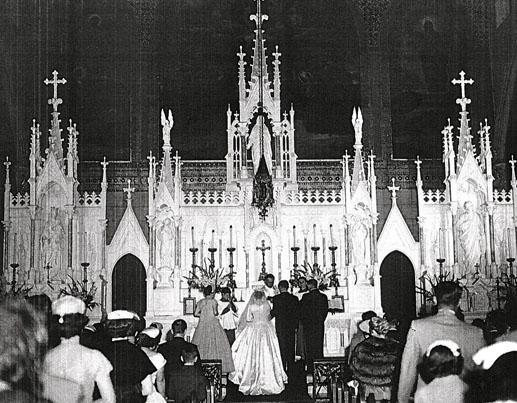 The original altar at Holy Name of Jesus Christ Church in Brooklyn.

Once they married, their home became a sort of boarding house for the younger Maloneys who immigrated to the States. The oldest of my great-uncles, Packie, met his Irish-born wife, Annie from Derry in Brooklyn, married on Easter Monday of 1934, of course, in Holy Name Church, where two of their children would enter religious Orders – John P. Maloney, “Father Jack,” and Maureen Maloney, my namesake, who became a Sister of St. Joseph.

And, of course, when my mother and father married in 1951, it was at Holy Name Church, the third generation of women to marry in this home of their faith. And even though I traveled from East to West and back again over the years living in California and Virginia and Nebraska and Washington State and now South Carolina, there was never any doubt in my mind that if I were ever to find my “God-match” before I died, I would marry in Holy Name Church.

However, this came as a great surprise to my husband when he proposed last June and asked me to marry the following weekend on the Fourth of July on the Battery in Charleston, one of the premier destination wedding locations of the U.S., with just a few friends as witnesses. While he thought this was a very romantic idea and expected gleeful affirmation, never could he have imagined that tears would start streaming down my face and I would simultaneously say a resounding “yes” to his proposal, but a barely audible tear-filled “no” to marrying in Charleston. It was then that I shared this childhood dream with him of marrying in this now-136-year-old Gothic Revival family church with all of my large Irish-Catholic family witnessing the Sacrament of our marriage with Father Jack presiding as he had for my older brothers’ weddings and second cousins’ weddings in the 1980s and our parents’ and oldest brother’s funerals in the first decade of this millennium.

And little did I know that day in June of 2013, when my Love popped the question that the church was about to undergo a major facelift. Holy Name had been “modernized” back in the early 1980s in an attempt to attract a younger population back to the church, much to the dismay (and, more often than not, outright anger) of the majority of the multi-generational parishioners. The original altar had been discarded, the chancel was turned into a carpeted stage, the frescos were painted over with a Pepto-Bismol pink, and almost all of the iconography was destroyed.

The restoration project was led by Father Jim Cunningham, present Pastor of Holy Name Church. With the support of the Holy Name of Jesus Parish Family, in less than a few months he had received pledges to the tune of over 1 million dollars which allowed him to bid on and obtain a historic altar designed by the renowned architect James Renwick. Originally intended as a side altar at St. Patrick’s Cathedral in Manhattan, but found to be too large for the space, it had found its home in St. Vincent de Paul Church in Williamsburg, Brooklyn, where it remained for many years. After that church closed about five years ago, the altar was disassembled into 1,400 pieces and stored in a warehouse until it came time to auction it off.

I was astonished and thrilled to see that the church was going to be restored to a likeness similar to what bore witness to the three prior generations of family weddings dating back 125 years. The restoration project to begin in late July and was expected to be completed by Christmas last year, but delays because of the enormity of the project, including fortifying the floor on which this multi-ton altar would rest, required placement of a foundation strong enough to support skyscrapers, which resulted in a couple of extended deadlines. 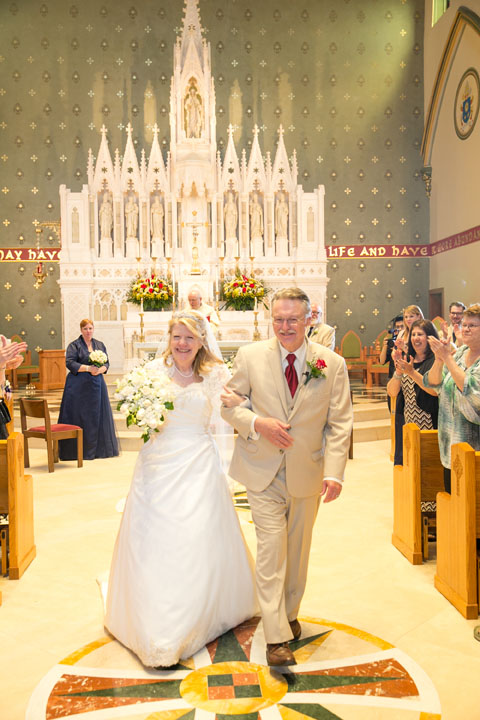 The bride and groom inside the newly-restored church. The altar was designed by James Renwick, who also designed St. Patrick’s Cathedral in Manhattan.

And in spite of all the work, set-backs and difficult winter faced by the Holy Name parishioners, the restored church was ready just one week before our May 25th wedding, making me the fourth generation bride in the Molloy, Maloney, Haugh family line to marry in this beautiful, sacred House of God. A testament to the success of the project is that while there were only five weddings in Holy Name in 2013, 25 were scheduled in the second half of 2014 alone.

While nerves were a bit frayed with all the planning, traveling and nail-biting in which I engaged for the many months leading up to the wedding, worried that the Ccurch may not be ready on time, praying novenas and leaving more than a few anxious messages on Father Jim’s voicemail, my prayers were answered. I suspected this was not just due to my prayers, or those of my family and friends, but also had more than a little something to do with the influence of all of my Holy Name ancestors who had gone before me, especially those strong Molloy women, including Margaret Shea Molloy with whom I shared a birthday, who had married in Holy Name and who had died on the steps of Holy Name at age 79 as she exited from mass.

All of the living family members who had married in Holy Name Church over the years had been praying as well and they were all so excited to be there in the newly restored church, but also to be seeing me carry on the family tradition, including my cousin Peggy Reilly Sullivan and her husband Pat, who unbeknownst to me until the evening of my wedding, had also married on May 25th in Holy Name, but 51 years earlier in 1963.

And, of course, there was my Matron of Honor, Eileen O’Brien Tlamsa, the sister we each were to the other growing up with just brothers, who had married in the modernized Holy Name back in June of 1991, with me at her side serving as her Maid of Honor. Eileen walked ahead of me and stood beside me as I married, fulfilling our shared dream as little girls so long ago.

When I walked that same center aisle that Margaret Shea, Mary Molloy and Mary Maloney all walked beginning 125 years ago, escorted by my two brothers, John and Gerard, and joined hands with my handsome groom, Norm, at this exquisite Renwick altar, the first bride of many who will walk down the new aisle in this completely renovated breathtaking Holy Name of Jesus Church, I knew my childhood dream was realized, and my Irish-American Holy Name Family tradition lived on, marrying in the presence of God, family and friends and the spirits of my maternal ancestors who had all married in this church called “home.”

And after the ceremony, we all stood on the steps of Holy Name Church joined by four Chinese-American photographers who led this jubilant group in “God Bless America,” all while waving American flags and being cheered on by the horns of passing cars and MTA buses, all seeming to signal their approval of this celebration of Marriage, America, Family and Tradition.