The story of one of the world’s most famous Marian Shrines began 135 years ago at 8 o’clock on Thursday evening, August 21, 1879, when the Blessed Virgin Mary, St. Joseph, and John the Evangelist appeared on the south gable end of a church in the rural village of Knock, County Mayo. To the left of John there was a plain altar with a cross and a lamb (the Lamb of God) surrounded by angels.

The apparition was witnessed by 15 people, men, women and children, ranging in age from 6 to 75, who watched for two hours in pouring rain reciting the rosary. They reported that not one drop of rain fell on the apparition or the gable end of the church.

Since that time the physically and spiritually afflicted have traveled there seeking heavenly relief. Up to a million visitors a year. 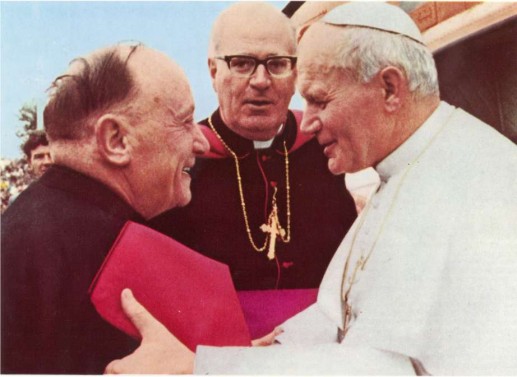 Pope John Paul II visited the shrine on September 30, 1979 to commemorate the centenary of the apparition and established the shrine church as a basilica.

Below is an excerpt from a list of cures recorded in 1880 and printed in The Nation.

233. John Kelly, of Moville, county Donegal, never put a foot under him, nor never spoke a word or even attempted to utter a cry, until he came to Knock; can now stand without assistance and can call aloud.

235. Thomas McNamara, of the county Tipperary, has recovered his sight; both eyes were dim; he was obliged to have a guide with him coming to Knock.

239. Mary Moffit, of Ahamlisk, had been suffering from a pain in her side for the past two years; is now quite cured.

245. Mrs. Nedhan, of St. Andrew’s parish, Glasgow, was the victim of a terrible malady, incurable by human agency; is fully restored to her former good health.

247. Catherine Mary Hayes; had been paralysed since she was three years of age; is now recovered.

248. John Carroll, of Tipperary, was suffering from a cataract on his left eye; he is now perfectly cured.

249. James Gorman, of the Parish of Lusk, Dublin, was deaf for twelve years, and was blind in the right eye; he had been an inmate of the Cabra Institute for the Deaf and Dumb; he can now hear, and has recovered his sight.

250. Thomas Loughran, of the parish of Milltown, county Kildare, who was deaf since he was three years of age, recovered his hearing at Knock. He had been under the care of Drs. Wilde and Wilson, of Dublin, but they were unable to effect any good result.

265. Edward O’Brien, of Nenagh, has recovered his sight.

267. Mary Murty, of Kerry, who was a cripple during the last seven years, is now able to walk erect.

268. Kate Kennedy, of the parish of Gurtnaho, county Tipperary was suffering from hip and spinal disease for the last two years and a half. She was in hospital in Dublin, and was not cured or even improved, now fully recovered, and feels as strong as ever.

271. Mary Anne Carolan, of the parish of Mullin, county Cavan, has recovered the sight of her right eye.

276. Widow John Kelly, of Morpeth (Rev. Mr. Davy, parish priest), county of Northumberland, had been suffering from severe pains in her back and legs. She could not work during the last five years, and sometimes could not even turn in her bed. She was completely cured the second time she went on her knees in the chapel at Knock.

277. Mary Donnelly, of the county Tyrone, has been cured of lameness in the right foot, from which she was suffering since she was a child. The right foot was a great deal smaller and shorter than the left, and she could barely touch the ground with it.

281. Thomas Scully, of the Catholic Institute, Edinburgh, was cured of hip disease, from which he had been suffering during the last fourteen years; he is now quite well.

283. Michael Mulherane, of Mobill, county Leitrim, has recovered the sight of his left eye.

288. Margaret Redmond, Tongarrow, a child of two years old, got instant relief from a violent pain in her finger, the top of which had been cut off by a chaffing machine.

289. Anthony Cavanagh, 15, Brabozan street, Dublin, was cured of hip disease; he was carrying a crutch and stick. He left his crutch at Knock, March 9th, 1880.

293. Brigid Macgovern, Cloon, county Leitrim, was cured of a dropsy and other internal diseases.

294. Patrick Cross, of the city of Limerick, is cured of insanity, from which he had been suffering for the last four months. He was for six weeks in the lunatic asylum of Limerick. He was discharged from the asylum as being incurable. He is now as sound in mind and body as any man in Ireland. He was also suffering from a weakness in his back, and could not walk without a stick; he can now walk home without it. He is perfectly cured.

303. Alice Mernor, of Bray, has recovered the sight of both eyes. She could hardly see anything previous to her visit to Knock.

304. Michael Cudmore, of Greenwich, London, was suffering from a sore on the face for six years. He is now cured.

307. Mrs. Kelly, of Tighe street, Dublin, is cured of a lameness from which she had been suffering, and which had deprived her of all power to walk for the last twenty-four years.

One Response to “Knock Shrine Turns 135”

On Saturday 21 August 2021, the 142 Anniversary of the Apparition at Knock, will be celebrated in County Mayo, and in...

Church of Scientology Arrives in Dublin

A new Church of Scientology National Affairs Office has made its home in Merrion Square, Dublin, and will be used to...

It sure was big news when Pope Francis, the first Latin American pontiff, was chosen. And there has been talk about the...