Irish Art and Architecture:
After Kells

The room housing the Temple of Dendur at the Metropolitan Museum of Art in New York, 1978, Kevin Roche John Dinkeloo Associates, Architects.

The Book of Kells is often thought of as the embodiment of the Irish visual style, but a new publication promises to change the way we look at art and architecture in Ireland. Sharon Ní Chonchúir investigates the breadth of new five-volume tome, which covers 1,600 years of visual and structural art in Ireland.

Every self-respecting person of Irish origin is able to list the names of Ireland’s greatest writers. Master wordsmiths such as Joyce, Yeats and Beckett are lauded throughout the English-speaking world.

Less is known about our visual artists. So seldom are they mentioned that one might think Irish people had achieved little in this artistic sphere. But to think so would be a mistake.

To think so would be to ignore Irish-born architect James Hoban who drew up the plans for the White House. It would be to neglect Dublin man Cedric Gibbons who designed the Oscar statuette. And it would be to delegate illustrious twentieth century artists such as Dorothy Cross, Francis Bacon, Pauline Bewick and Louis le Brocquy to undeserved obscurity.

An important new publication aims to redress this imbalance by showcasing the achievements of Irish artists and architects throughout history. Art and Architecture of Ireland is a five-volume work which will be launched this November. Produced by the Royal Irish Academy in collaboration with the Noughton Foundation, the Irish Government, the Paul Mellon Centre for Studies in British Art, and Yale University Press, it surveys 1,600 years of Irish art and architecture.

“It aims to be the most important art book ever produced in Ireland,” says Mary E. Daly, President of the Royal Irish Academy. “While our pedigree in literature and poetry is known the world over, the quality and strength of our art and architecture has at times not received the recognition it deserves. Featuring more than one million words, 250 contributors from around the world and 3,000 images, these volumes tell the untold story of Irish art.”

Two historians at University College Dublin came up with the idea. Nicola Figgis and Paula Murphy thought that Walter Strickland’s celebrated 1913 book A Dictionary of Irish Artists needed updating. They approached the Royal Irish Academy in 2007 and seven years of scholarship later; this overview of Irish artists from medieval to modern times is ready for publication.

The first volume looks at the medieval era from 400 to 1600. Its editor Rachel Moss uses the Book of Kells as a starting point because it represents the period for many. Stolen in 1007 and hidden once its precious cover was removed, it survived Cromwell in the mid-seventeenth century when a general in his army saved it from flames and delivered it to Trinity College.

Symbols of the four Evangelists from the Book of Kells. Reproduced with kind permission from the Board of Trinity College Dublin.

“The result is that the intricate illuminations of the Book of Kells or the silhouette of a high cross are images that suggest ‘Irishness’ far beyond Irish shores,” says Rachel Moss, President of the Royal Society of Antiquaries of Ireland and Assistant Professor in the Department of History of Art and Architecture in Trinity College Dublin. “But the extended history of Irish art is far more rich and complex as is the nature of the Irishness it represents.”

These volumes aim to expand our understanding of both Irish art and Irishness. The first volume does so by looking at the architecture of the time, mostly focussing on the surviving forty-five thousand or so ring forts. It also looks at how the coastal nature of Irish settlements created a sea-faring people that established colonies in Scotland, Wales and England and along river arteries of continental Europe.

“In the late fourth century, Irish opportunists took to the Irish Sea,” says Rachel Moss. “Traces of them can still be seen in the Ogham stones they erected to demarcate their territories. They also captured slaves and it is likely that these slaves – of which the Welshman Patrick, later Saint Patrick, is the best known – formed the earliest Christian communities in Ireland.”

These communities thrived, creating a church that was a key player in the Irish art world of the time. Craftsmen created gospels, service books and liturgical vessels for the church and patrons commissioned stone crosses and chalices for it.

The church spread Irish artistic influence too. Irish missionaries established settlements in Britain, France, Switzerland and Italy and these centres produced works of art such as the Lindisfarne Gospels which were created in Northumberland by Irish monks.

The volume also looks at the Viking influence, the Norman introduction of castles, and how Ireland moved from being a country that was influenced by Scotland, continental Europe and England to one that was almost completely in thrall to England.

There’s more too. The volume examines how sacred pre-Christian sites were assimilated by the church. Kildare is an example. Its name comes from Cill Dara or the church of the oak, implying that the tree was once worshipped there.

There are essays on Celtic art; high crosses; specific works such as the Tara Brooch and Ardagh Chalice; the sexually explicit sheela-na-gigs; planned towns; the development of glassmaking in Ireland; the effects of the Plantations; the codification of clothes and jewellery; and much more.

Essentially, this first volume draws together diverse scholarship across a range of topics to give a comprehensive overview of the art of the Middle Ages. “Most of Ireland’s medieval buildings, manuscripts and fine metalwork that have come down to us are mere skeletons of their former selves,” says Rachel Moss. “It is the aim of this volume to gather the morsels and crumbs and provide some insight into the various courses that constituted the feast of Irish medieval visual expression.” 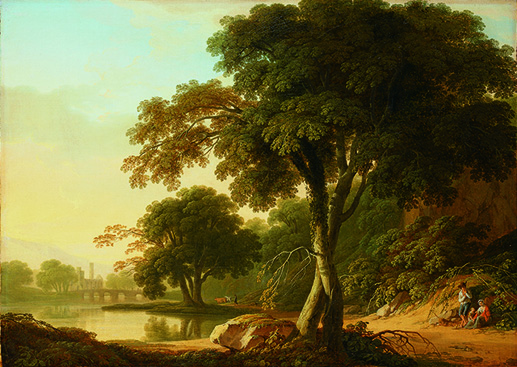 The following volumes are more specialised. Volume two looks at painting from 1600 to 2000. It features biographies of the major painters from that time and essays across a range of related subjects. These vary from an essay about the Dublin Society which ran an influential drawing school to a piece about the history of graphic satire and another about the painting of heraldic coats of arms. There is even mention of Henrietta Dering who moved to South Carolina and became the first female in America who was paid to paint portraits.

Volume three looks at sculpture during the same period. Its definition of sculpture includes crosses, grave markers and embellishments on buildings such as the Casino at Marino as well as classical busts, church monuments, nudes and war memorials.

There are essays about all of these and more. Whether you’re interested in the Arts and Crafts Society of Ireland, Irish coins, sculptures of Saint Patrick or nationalist sculptures such as the 1798 memorial in Enniscorthy in Wexford, you’ll find them mentioned here. 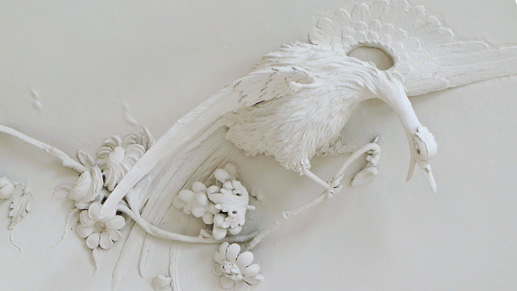 Due attention is paid to the sculptors too. Biographies of all the major figures of the time are given, including Irish-American sculptors. One of these was Thomas Crawford who was born to immigrant parents and went on to create the “Progress of Civilisation” for the pediment of the east façade of the U.S. Capitol Building, and “Freedom” for the dome, and “Justice and History” for the main façade.

Volume four looks at architecture from 1600 to 2000 and in so doing, reveals a great deal about the politics of the time. “Architecture is a question of function but it’s also a reflection of national identity,” say the authors of this volume Rolf Loeber and Hugh Campbell. “It can be conscious when it’s chosen to promote a specific political agenda or moral code but it can also be an unconscious echo of who we were or were trying to be.”

If other volumes were wide ranging, this is more wide ranging still. There are essays about the feudalistic structure of Irish society until the late nineteenth century. The fact that there were 6,500 landowners and 1.5 million tenants in the 1870s inevitably had an impact on our architecture, or the paucity of it. 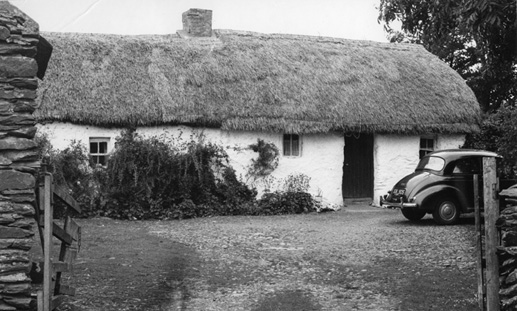 Historical essays tell how single storey cabins were replaced by two-storey farmhouses following the land laws of the 1880s. The volume charts the decline of the Irish country house. There are even essays about the boom and bust of the recent property crash.

And there’s more. There’s information about the building materials used to build farmhouses, including details on how to thatch a roof. There’s a piece on property taxes, which once included residential, hearth, window and glass tax – many more than the much-maligned property tax of today. There’s an essay on the different styles used in dry stone walls, including those used in North America by the Irish who first emigrated there.

There are sections on slum clearance in Dublin; the rebuilding of O’Connell Street after 1916, the War of Independence and the Civil War; traditional Irish shop fronts; Martello towers; and Ardnacrusha power station, the first big infrastructure project undertaken by the new Irish State. 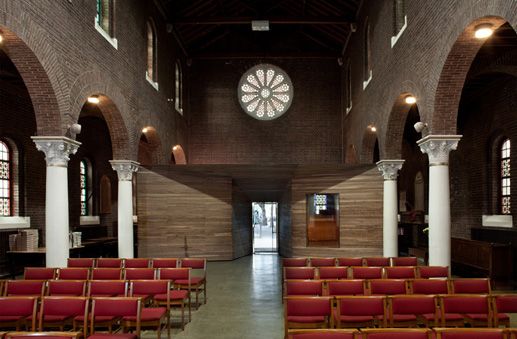 There is mention too of the Irish-born and American Pritzker Prize-winning architect Kevin Roche. His designs span the second half of the twentieth century, beginning with the Oakland Museum in California in 1966 and continuing up to the present day. They include the Layfayette Tower, the US Securities and Exchange Commission, 1100 New York Avenue, the John Deere World Headquarters, the Metropolitan Museum of Art and the Convention Centre in Dublin.

This is a hugely impressive work. It’s not something you’ll consume in an evening. It’s much more scholarly than that. Its authors aim for it to be “the most comprehensive and ambitious undertaking of its kind ever attempted.” 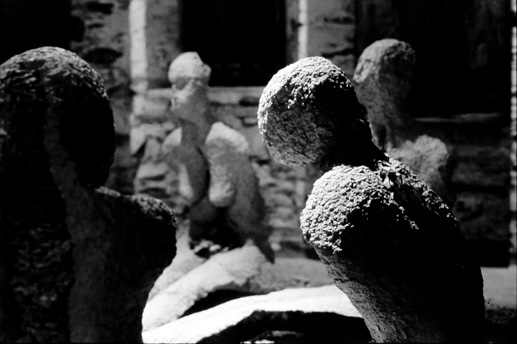 Lest you feel daunted by such scholarship, rest assured that it rewards leisurely perusing too. It’s a work to dip in and out of, choosing a theme at random here or a particular piece of art or architecture there. It’s a great way of preparing for a trip to Ireland by learning more about the buildings, streetscapes, cities, towns and villages you’ll encounter once you get there. And in reading about the art that’s been created on the island over the centuries, you’ll learn more about who we were and are as people too.

The five-volume Art and Architecture of Ireland is available for €400 from www.rai.ie. Orders made before the publication date of November 1st will be dispatched with free postage.