On Thursday, September 18, 2014, Irish America magazine celebrated the 17th Annual Wall Street 50 Awards Dinner at the Metropolitan Club in Manhattan. The Wall Street 50 recognizes the most exciting and innovative Irish American and Irish-born leaders in finance, profiled in the October/November 2014 issue of Irish America.

We were delighted to recognize our first female Wall Street 50 Keynote speaker Kathleen Lynch, chief operating officer of UBS Group Americas and Wealth Management Americas (whose cover story you can read here). UBS is one of the top financial service companies in the world, thanks in no small part to Lynch. Kathleen brings nearly 25 years of experience to UBS, having previously worked for Merrill Lynch. Lynch, who was also featured on the cover of the October/November issue, encompasses the aims of integrity, commitment, and community loyalty that are the hallmark of all the honorees.

In her empowering yet humorously personal speech, Lynch praised her fellow honorees, while calling them to action, saying, “Never has there been a greater need for strong leadership. What you do every day is incredibly important to millions of people around the world and you should feel incredibly proud of that work.”

Speaking also on being a woman in an industry that has been predominantly male-oriented, she said that it was the “Irish atmosphere” which helped her shape the image she had of herself in the early years in the 1980s when women were even less common than they are today on the exchange.

“I didn’t see myself as one of the few women on the trading floor,” she says. “But rather one of the many Irish. That genuine sense of family was both comforting and exhilarating. Like anyone looking around seeing colleagues with backgrounds similar to my own, it went a long way in helping me acclimate to the business.”

Although born and raised in the United States, her mother’s roots in Burtenport, County Donegal have greatly influenced her interest and appreciation for the Irish culture. And as a first generation Irish American, Kathleen dedicates her time to philanthropic efforts on both sides of the Atlantic.

Lynch was introduced by Bob McCann, CEO of UBS Americas and a former Wall Street 50 Keynote speaker, who spoke of the opportunity all of the honorees have to recapture what makes the industry a vital and positive force in the U.S.

“Most people don’t know Wall Street,” he said. “Wall Street is people like this in this room. Wall street is an industry that cares.”

Introducing Lynch, McCann highlighted her compassion and integrity, saying, “When I look at my friend Kathleen Lynch. Kathleen Lynch represents the best of what it means to be Irish. As well as the best of what it means to work on Wall Street. I have known Kathleen for more than 20 years. She is a trusted advisor and she is a key member of the leadership team. And I can’t imagine a venture in my life that I could take on that I wouldn’t want Kathleen on my side.” 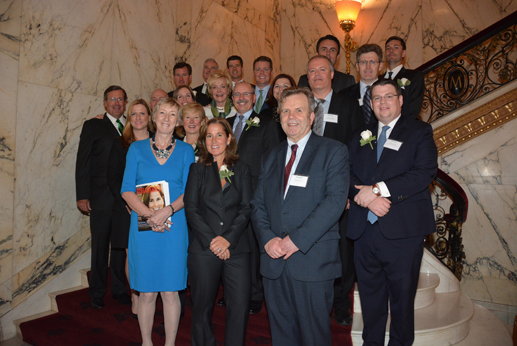 Her remarks were preceded by a stirring version of “I’ll Take You Home Again Kathleen,” performed by singer KT Sullivan, and comments by Doug Campbell, director of Beer Business at Diageo, which owns Guinness, Consul General of Ireland Barbara Jones Patricia Harty, and Niall O’Dowd, all of whom touched on the culture of generosity and support that is often an under-appreciated aspect of Wall Street narratives.

Co-founder and editor-in-chief Patricia Harty, touching on the heritage of overcoming hard times to achieve success said, “I know that all of you in all that you do, you honor the past generations who toughed it out…. Whenever we’re in a gorgeous room like this with so many people who care, I can’t help but think that the ancestors are proud of us. We have to remember in cases like this [our history] is important.”

Founding publisher Niall O’Dowd spoke of what he called the “giving Irish,” saying, “Because of the universal culture of giving back, which you exemplify, Wall Street has had benefited from that, and not just in business but for so many other charities.”

Ellen is a partner with PwC and is the U.S. Insurance Sector Leader for the PwC’s Advisory Practice. In this role,...

Brian Sweeney is a director within NASDAQ’s Global Information Services. In his role he is responsible for sales of...