Wounded Warriors in the Rockaways (Photos)

Crossing the Marine Parkway Bridge from Brooklyn into the Rockaways. Photo: Legends in Valor.

Removed from the scaffolding of Manhattan in the middle of one of the country’s oldest and most vocally patriotic Irish neighborhoods, the Wounded Warrior Project’s Adaptive Watersports Festival could not be held in a more symbolic location. Here, the shadow of the Twin Towers and the glint of the near-complete One World Trade Center loom large.

The Rockaway and Breezy Point community was devastated by the attacks of September 11th. In Breezy Point alone, 32 of the neighborhood’s roughly 5,000 full-time residents died. That date too, is significant for the Wounded Warrior Project, which was founded in 2004 to aid injured veterans of the Iraq and Afghanistan wars in the wake of the attacks. It was a clear choice then for retired FDNY firefighter and Rockaway native Flip Mullen when he was approached by Walter Reed Medical Center to start an adaptive water sports weekend in his neighborhood. Mullen, who has been involved in adaptive sporting activities for over 40 years now, calls it “the homecoming these guys never got.”

“We lost someone from about every other block here. When a lot of these young men signed up, they were picking up the flag and running with it. So, to support them in any way we can is just the right thing to do,” he says.

Held the weekend after the Fourth of July each summer, the four-day festival begins with a parade from Rescue 5 Fire Station in Staten Island, across the Verrazano Narrows Bridge, down the Belt Parkway in Brooklyn, and concludes on streets lined with flag-waving supporters in the Rockaway neighborhood of Belle Harbor. The next days are filled with water activities of all kinds, including cruises around New York Harbor, fishing, water skiing, surfing, kayaking, scuba diving, and paddle boarding. The activities are fully adaptable to veterans with any type of disability, which range from PTSD to amputations. 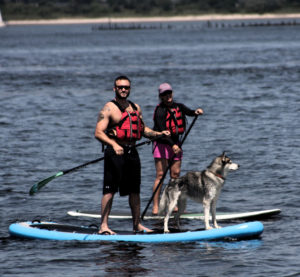 Bill Hannigan, a native of Queens himself and now the Physical Health and Wellness Coordinator for New York City, attended the first adaptive aquatics weekend ten years ago as a Wounded Warrior. For the last three years now he has been coordinating the event in partnership with Legends in Valor, the Rockaway community’s own non-profit. Founded by Mullen, Legends in Valor is aimed at honoring fallen NYPD and FDNY service members and works closely with Hannigan.

Since the 1960s there have been organizations devoted to adaptive sports. For the 50 Wounded Warriors who attend the event, this means there is a strong network of support that goes back often times before their birth to spur them into participation. This network, maybe more so than the activities themselves, is crucial to breaking the cycle of depression and isolation that befalls many veterans after release from active duty.

Gerard Patrick Miserandino, a licensed instructor with New England Disabled Sports, both of whose arms have been amputated below the elbow, is a Vietnam veteran for whom such service and patriotism runs in his family. Newfoundland-Irish on his mother’s side, three of his uncles were Fransiscan Brothers, his other uncle was in the Navy, and each St. Patrick’s Day the family would march with “the boys from St. Agnus,” as he called them. Adaptive sports, he says, are “a small stepping stone.” 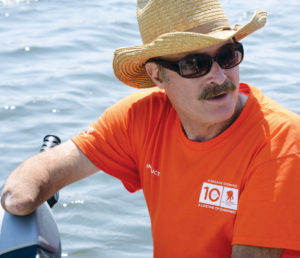 “With adaptive sports, any disability, any challenge a person has, if I can get them to do one small thing, whether it be water skiing, snow skiing, or biking, just so they can feel independent… Because when you see another vet who has a major disability from war who gives you that little push, they can’t say no to me. And when they do it, they say, ‘He’s right. If I can do this I can do anything. There’s more to life than losing an arm or a leg.’”

But the weekend is also about more than building relationships with other veterans and Wounded Warriors; it is about reincorporation into a community that shows its support, as the Irish Americans in the Rockaways do. It’s as much about restoring faith in physical independence as it is about restoring mental security in public acceptance.

“A lot of times what we’re just trying to do is get them out of the house, getting them to understand that the community is welcoming,” says Lane Wiseman, the East Regional Manager for the Wounded Warrior Project’s Physical Health and Wellness team. In the Rockaways, that sense of gratitude and non-judgmental welcome is far from scarce.

“It’s unbelievable,” says Michael McCoombs, who grew up on Carraig Bearn Croft farm in Massachusetts and was medevac’d out of Fallujah in 2003 while serving with the Rhode Island National Guard. 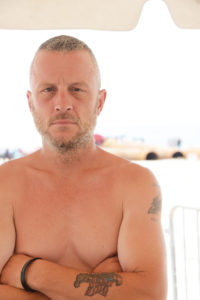 “The people who are putting it on, the fire and police departments, the whole neighborhood, have very big hearts. It’s hard for me to fathom that there are people like that out there,” he says. “They’re so appreciative and we don’t ask for that, we don’t expect that, so it’s overwhelming for us that such kindness is out there because it’s so different from when you’re abroad fighting. It’s amazing. That’s the single word you can say.”

Not all the warriors have had as much time as McCoombs to recover from their injuries. In fact, two-thirds of the Wounded Warrior participants present at the event were active duty service members who came straight from both Walter Reed Medical Center in Washington, D.C. and Brook Army Medical Center in San Antonio, TX. Some of them had been injured less than three months. For them, the community and veteran networks become ever more important. For someone like McCoombs, seeing them come out gives him strength.

“To see the kids who are in the hospital right now, to see the smile on their faces, I don’t have to do anything but watch that. It makes me proud.” 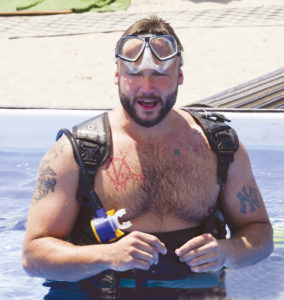 “It’s like hitting the reset button,” says Iraq veteran and Rochester native Lyndon Villone, who is Irish on his mother’s side and has the shamrock tattoo to prove it. And what is his advice for other wounded veterans? “Don’t let your disability define you, because anything can be turned into a strength. I’m going to go home and finish up all the work I have been putting off or saving until the last minute. With every event I do, it’s like that – it’s going to be great.” 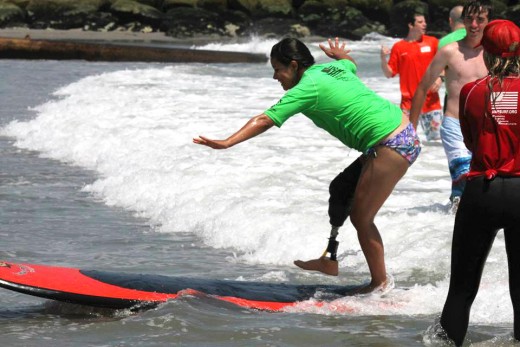 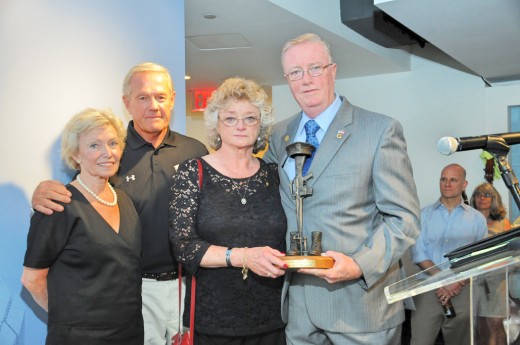 Rita and Flip Mullen (left) with the parents of Captain John J. McKenna IV, USMC, who was honored by Legends in Valor at a reception on Thursday, July 10. McKenna, also a former NY State Police officer, was killed in action in 2006 attempting to rescue a member of his platoon.

One Response to “Wounded Warriors in the Rockaways (Photos)”

Last year, the U.S.S. Mason arrived in Derry, honoring the crew of the ship’s World War II namesake, which made port...

Patrick Gallagher, who everyone called Bob, left County Mayo at 18 to live in America. Four years later, in April 1966,...

Dr. Francis O’Donnell and his daughter, Dr. Mary O’Donnell, have dedicated their careers as physicians to serving...

OVER 210,000 IRISH ENLISTED IN THE BRITISH ARMY DURING WORLD WAR I. AMONG THEM WERE DOCTORS SUCH AS MY GRANDFATHER WHO...